I started thinking of this build over two years ago.
The idea made some progress not long ago, and the last couple of days my brain worked 24/7.

The scenario: A German unit belonging to the 16th SS Panzergrenadier Division are fighting Americans in Italy late summer 1944, suddenly, they realize that they also have a British recognition unit in their back. Upon that one of the panzer crew just see something in the air… life is a bitch! 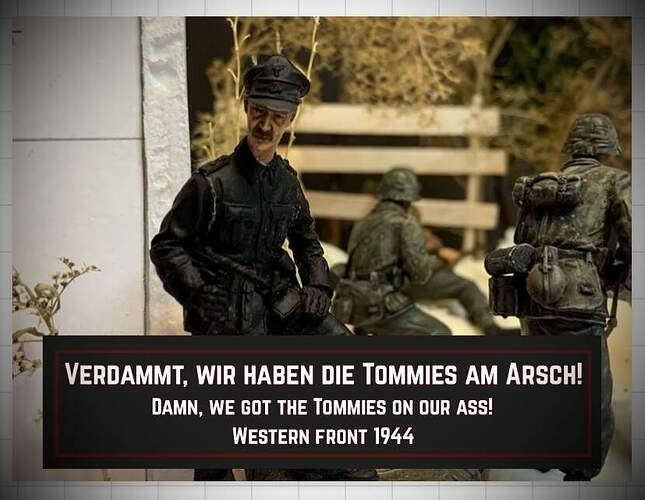 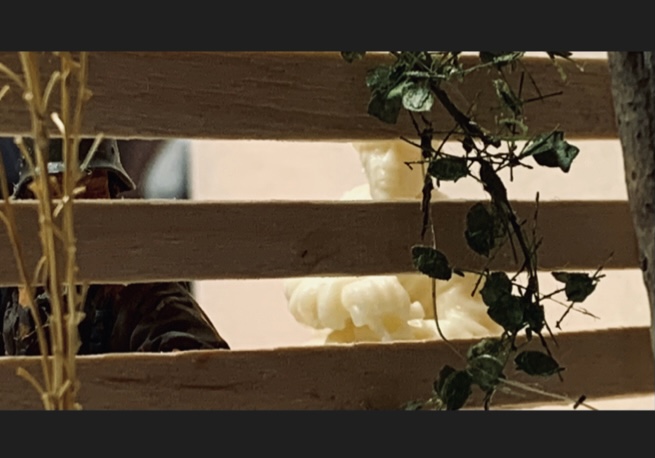 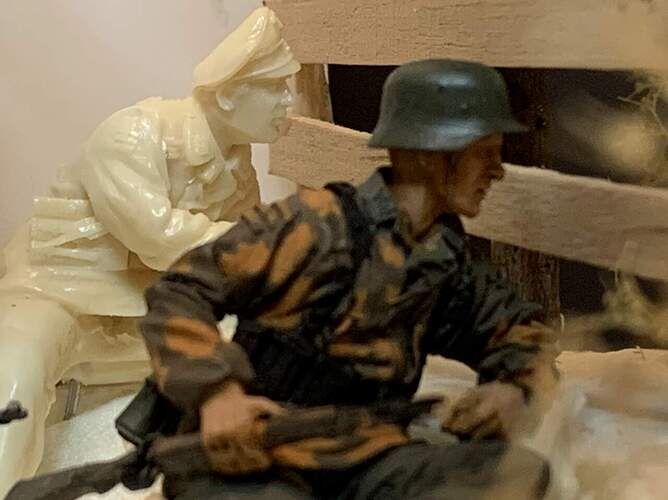 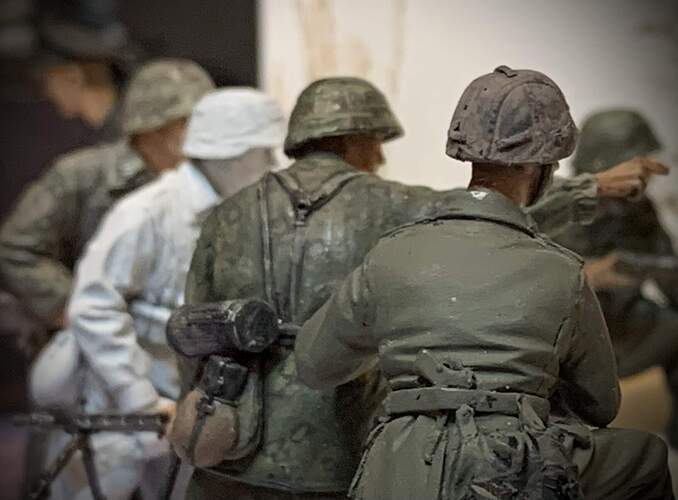 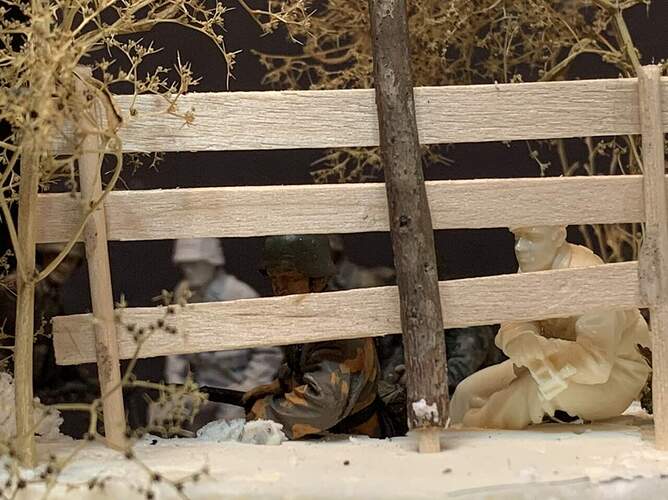 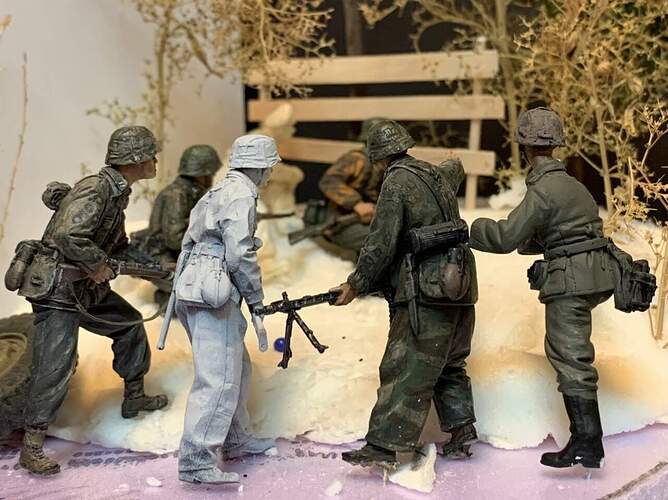 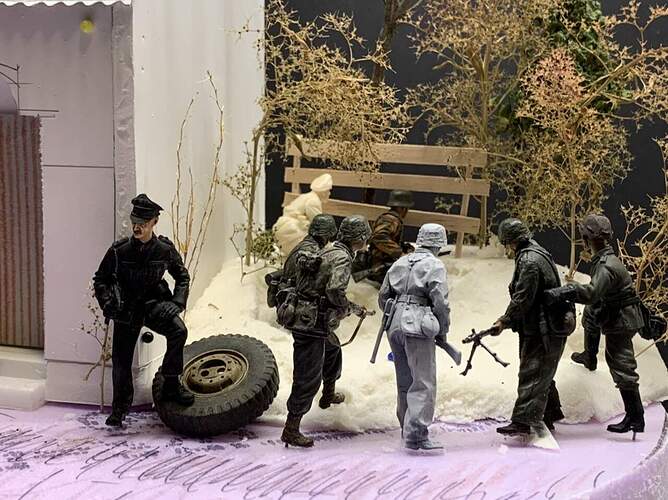 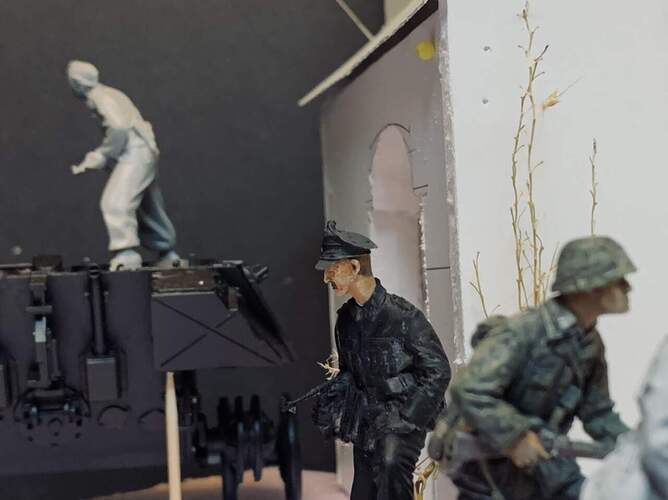 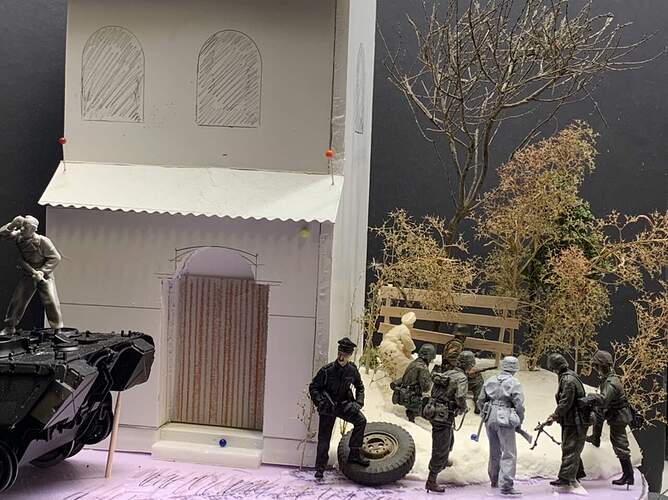 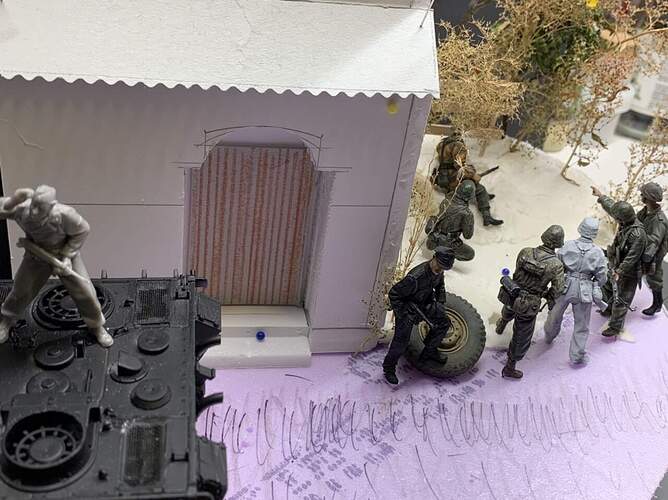 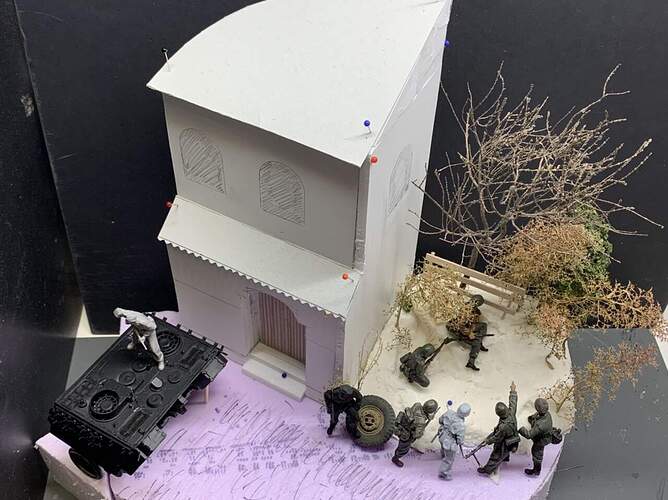 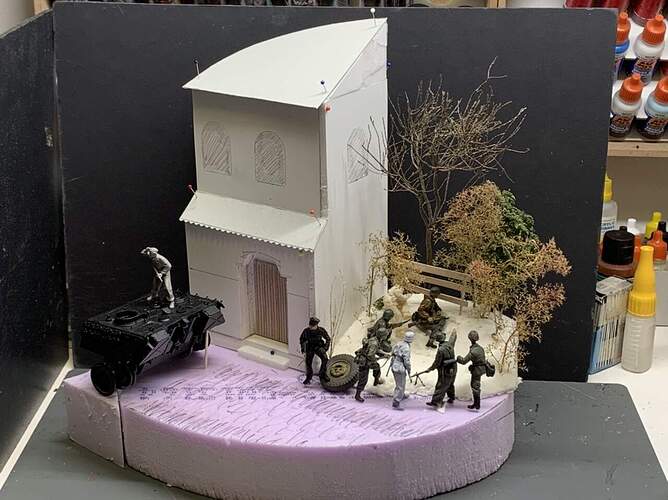 I have been practicing to do the facade, I am thinking something like this: 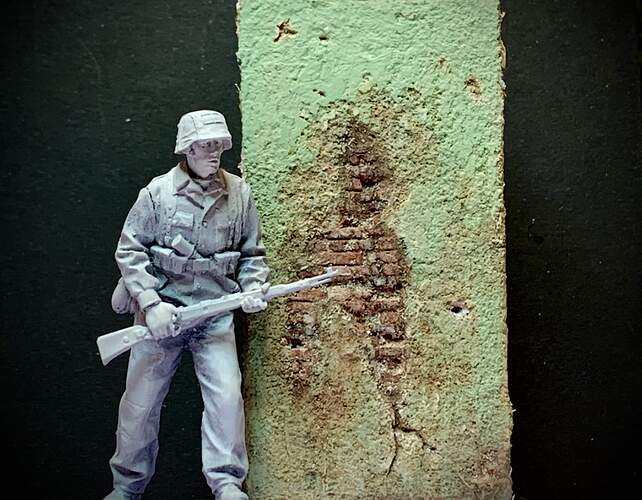 I know it’s not an optical story with a British unit popping up near American forces. If that not work at all, I will have to change the title from Tommies to Americans. No big deal.

I choose Italy instead of France just because I have been several times in Italy and know the buildings and colors better.
Some may not like the Panther I have cut, but I have no room for a bigger diorama. And I don’t want a full size tank to be the focus. I hope you understand.

Please let me know what you think of the setup and scenario. Cheers

Some may not like the Panther I have cut, but I have no room for a bigger diorama. And I don’t want a full size tank to be the focus. I hope you understand.

I think it’s perfectly fine to have a cut tank, your the diorama expert but I think cut should not be so perpendicular but more at an angle or maybe curve to fit the base shape. I think showing the rear end is fine, I would have been tempted to show the front with a little turret and barrel, as to me it appears the figures are scouting ahead and seems strange to have the tank facing away. As you wouldn’t be scouting behind but with title that does make more sense, just optically takes a minute to match that up.

I will be watching either way you go with this build.

Use something else instead of that spare wheel. It isn’t connected to the story in any way at all. It could have been left there weeks ago but in this context it only raises unneccessary questions (WTF is that wheel doing there??)
Use a rock or change the terrain slightly or maybe move the figure back to the steps of the house as if he was on his way inside to look for a better view from an upstairs window when his attention was turned back over the rear of the tank.
The 4 soldiers standing beside each other look like they are posing for a war correspondents camera. Try to spread them out, could be difficult due to the position of their legs and feet.
One option is to open up the window over the fence and have someone check the terrain using binoculars. Gives the guy by the wheel one more reason to go upstairs.

Cheers / Diorama police who has never constructed a diorama …

“I think it’s perfectly fine to have a cut tank, your the diorama expert but I think cut should not be so perpendicular but more at an angle or maybe curve to fit the base shape. I think showing the rear end is fine”
Yep!
The tank could be turning to the left, away from the house. The road could have a curve or the tank is taking, or has already taken, up a position facing the enemy to the left of the diorama and suddenly the enemy is also discovered in the distance beyond the fence.
If the tank rear is moved slightly left it gives more space for the wheel stepper to stand by the front door and look back over the tank hull.

The 4 soldiers standing beside each other look like they are posing for a war correspondents camera. Try to spread them out, could be difficult due to the position of their legs and feet.

That or I thought it was a Senior NCO pointing out the plan of attack and making sure everyone is on the same page.

Change the wheel to a ammo crate. He appears to be a tanker, so he is listening to the battle plan and keeping an eye on his rig.

Yes the NCO is telling the other soldiers the situation, the whole idea is that they are close to each other, check on that!

Never mind the tyre, I just needed something under his foot, I took the first thing I got in my hands, no ammunition boxes was in sight at that moment

I chose the back of the Panther for two reasons, 1 it’s the only useful part I have left of that tank, 2 to show the back is the hole idea of the title: “we got them on our back”. I can’t have that title and showing the front, right!

Concerning to cut it in another angle, i can’t cut it more, then it’s nothing left and the result is not good enough. So the tank is what it is guys.

Concerning the crew on the back of the tank. Well there are 5 members in the crew. I suppose some of the other crew members are in position to look for enemy’s in the front and left side. This guy is looking back, but of course he look to his right as well.
I suppose he turns to his right because some other in the crew have said “is that an aircraft at 3 o’clock”? Or something like that.

Concerning the tyre guy…from my point of view this is the only part that I am not sure about. He was the last figures to be placed.
When I saw his quite old face, I imagined an experienced officer that almost for him self said:
Verdammt, wir haben die Tommies am…

But that’s impossible for the viewers to know.
Let’s determine his fate later on.

Hope to hear from more of you guys later on, this build is on hold right now for a couple of days.
Cheers

Ps after writing the text above, I got an idea for the tyre guy

I will show you that later on…

That makes sense to me. I think the crew member on the tank helps sells the surrounding aspect. The tire guy seemed like the tank commander hearing about the battle plan. Look forward to what you have in story, I am sure it will be good.

Another good one in the making,

Ami* is derived from Amerikaner, but it specifically refers to people from the United States, including US soldiers

I seem to be the maverick here maybe but I kinda like the whole layout. It makes sense to me. I understand you used the spare wheel temporarily. I would use something non military for the guy to prop his foot on. Something belonging to the house maybe? Some firewood stacked up or in a pile? I love the bunch looking through the fence and bushes.
J

Another little masterpiece in the making.

Looks fantastic so far and love the sense of everything that is going on.

Ref the Panther, do you have the turret, or is that all there is ? I love the cutaway idea of it, but to me it’s length looks like there should be at least a small part of the turret rear showing ? If that’s all there is… Then you gotta work with what you got

The old crusty Panzer officer needs to go on the steps

as he is going to be checking out what the crewman on the back deck is seeing in the distance.

The crouched officer by the fence is going to be the one directing what goes on and who goes where. I doubt the MG gunner would be a SNCO, they wouldn’t normally be lugging a heavy MG around that’s usually the junior crow or the section muscle man… He is merely pointing to something he has seen.

I like your dio idea very much. The only exception is the old Panzer officer. He looks too old to me. Old enough to be a Volksstrum member. I would replace him and the tyre with someone who looks less geriatric (hey, he looks older than me and I’m 68) and an ammo crate, rock or some brick debris.
As you say, the tank piece is what you had to work with so it stays as is. I commend you for using your left over tank parts this way.

Cheers,
C.
PS- love the pistol tucked into the belt in pix#4

I think they’re here in force, one target-rich environment

Thanks to all of you!
@Uncle-Heavy I have tested to place the tank a little bit more away from the house, that’s looking good but I don’t get a straight angel for both the tank and the building. Let’s see how I solve that.

The old man is not a tank man unfortunately, he has a army uniform. The worst problem with him is that he looks down. I just made this for fun: 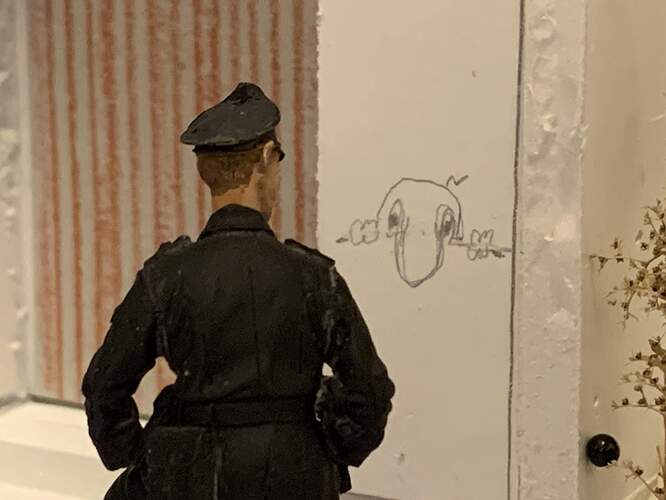 I have replaced his head with a younger guy that is looking up. I added a tank commander that also see the thing in the air, he has start moving forward.
Now it’s two stories in one diorama, that’s okey, but nothing more is acceptable.
I will think it over for a while and continue with other works. 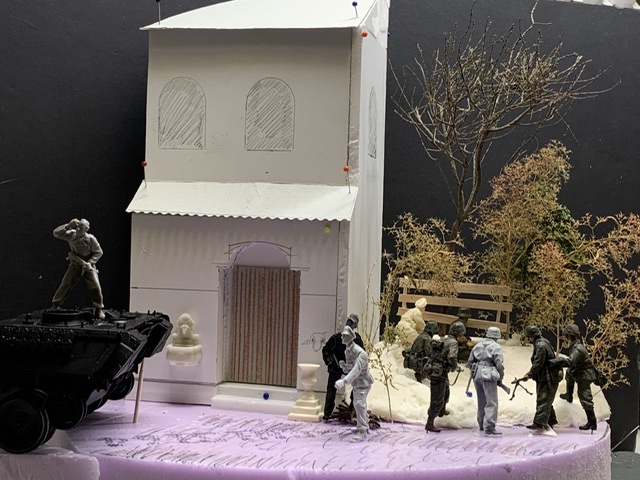 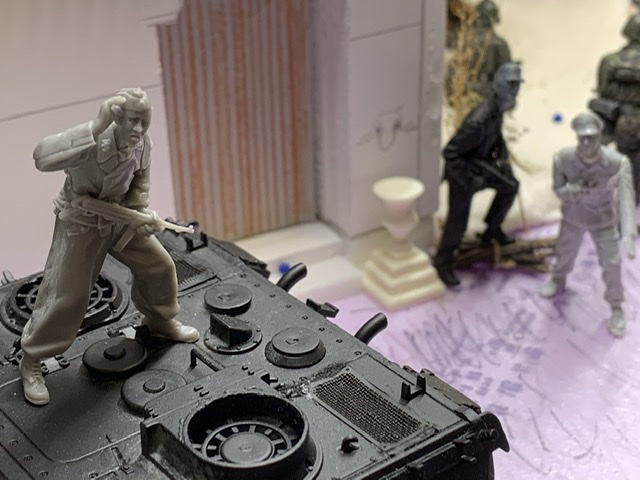 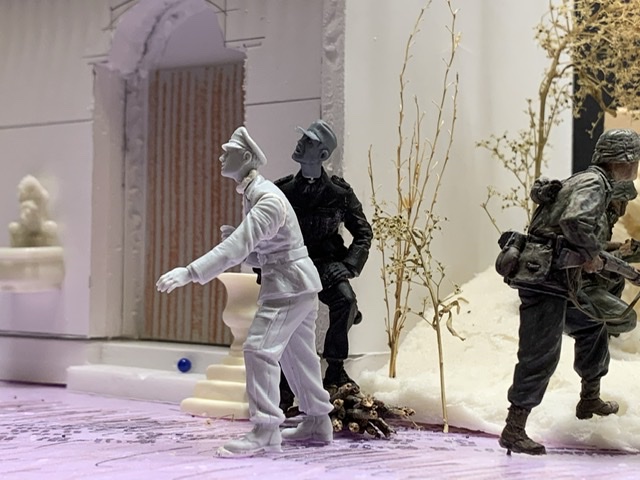 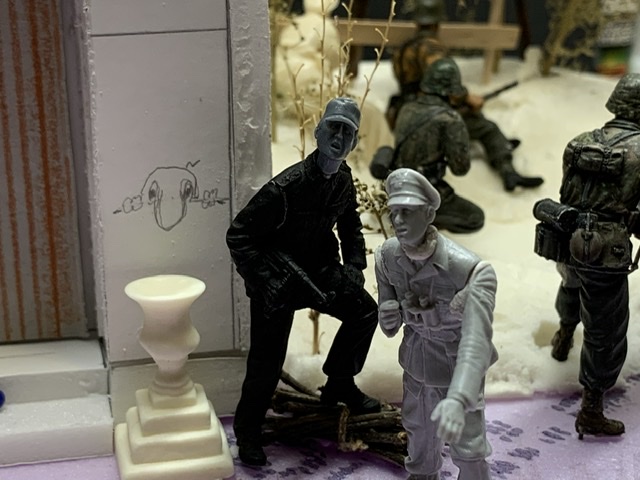 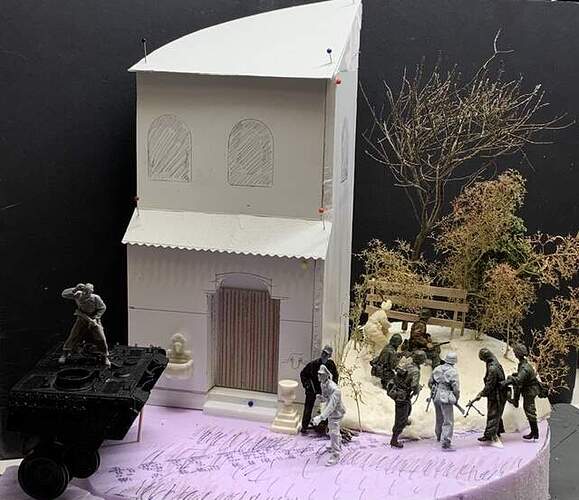