Vietnam No Way Out 'Inspirations' by Young Won | Armorama™ 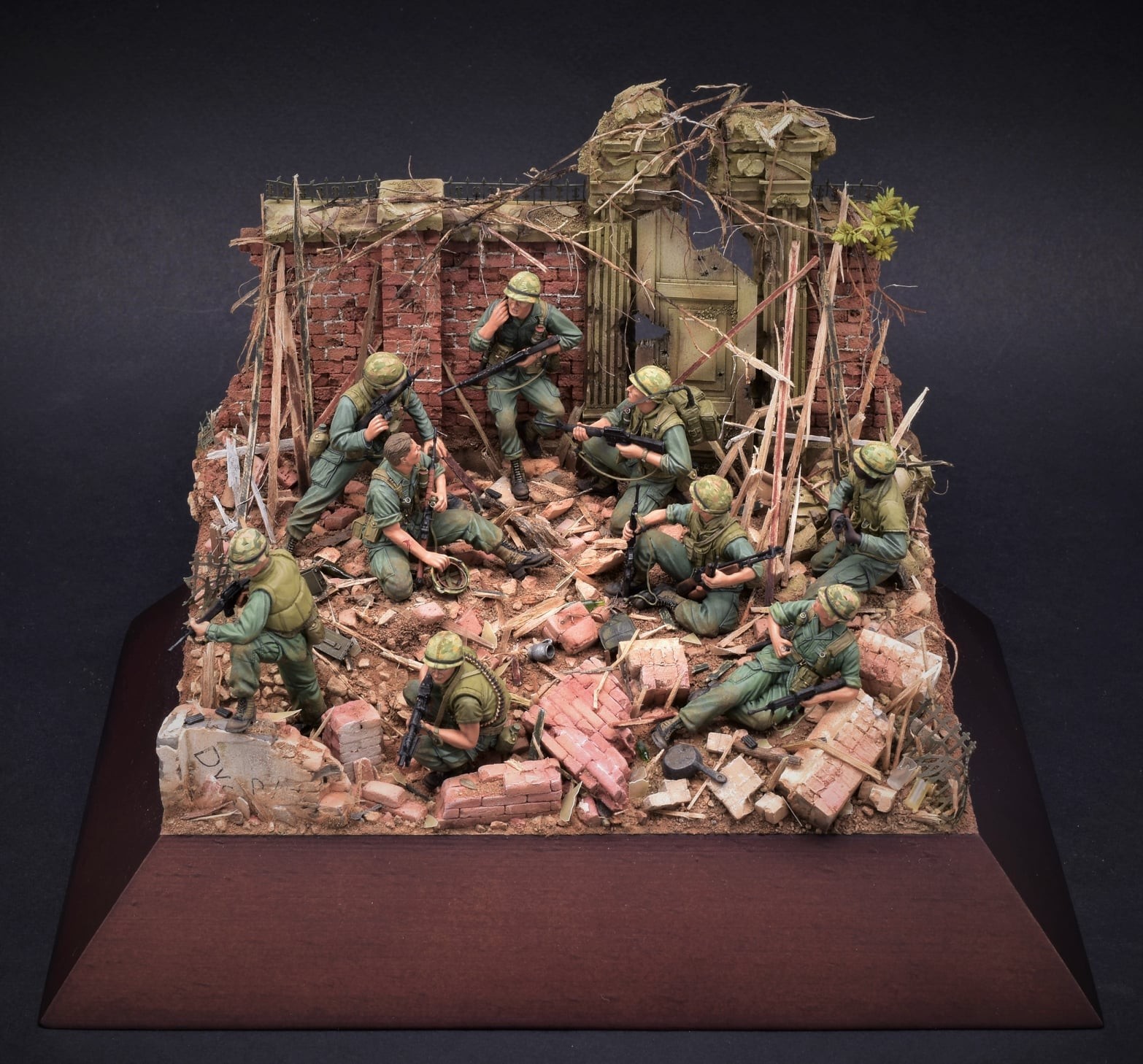 This is partial text from the full article (usually with photos) at https://armorama.com/news/vietnam-no-way-out-inspirations-by-young-won
3 Likes
barnslayer June 18, 2022, 7:53pm #2

Awesome work. Question: Where’d the BAR come from? I know the ARViNs used them early on. Some advisors used them early on too. (stripped the bi pod off and used them as an auto rifle to have quick reload/ detachable mag. and common ammo to the M-1s the ARViNs had) Also looks like one of the other guys has an M-1 carbine(?). Again, ARViNs and advisors, but not grunts.

I think you are mistaking an M-14 with a M-1 carbine. The guy with the BAR has a shotgun and M-16. Maybe collecting arms from the battlefield.

The guy with his helmet off has an M-14 (check the grooves on the handguard). The guy with the BAR is also holding another weapon besides his M16. I could imagine him holding LT’s rifle/ carbine/shotgun while he’s busy on the radio or even holding a rifle for the man with the M-79 (blooper/thumper) but I don’t get where a BAR comes to being there.

The M14 is outdated as well. The USMC held onto them a little longer than the US Army, but they were replaced by the M16. The M14 would be gone w/the rest having M16s. I agree that the BAR is totally out of place as well.

I would respectfully disagree about the M-14 being out of place. Troop 2nd from the right clearly has one while his squad mates have M-16’ and an M60.

LT is against the wall, on the RT, with his M-16. As far as I know Thumpers carried their M-79 and a 1911A1. If someone had to hold a rifle for him in a firefight the guy holding it wouldnt be able to shoot his own. (SWAG. I wasnt there.) M-14, I question, unless it was scoped for sniper work. Logistics wise it would be different caliber from everybody else. (True, the Pig used 7.62mm but there was never enough for it. Dont think they’d share. )

If its not sorry. Im not qualified in gun spotting.

We don’t have a date for this diorama and Panzer_Modeler’s photo did show an M14. There were certainly holdouts especially when M16s were having McNamara induced problems.

I do see LT holding his own M16. So the question remains… why is one trooper holding so many rifles including a possible shotgun?

Stunning work mate,
Even more fascinating with the inclusion of the “out of place weapons”? Every picture tells a story. It’s up to the viewer to come to his own conclusions and up to the builder to get us to use our own imagination. War is chaotic, the oposition will use anything that shoots and i have no doubt that the guys in Vietnam aquired all kinds of non U.S. issued weapons. Not being shy to use them if needed.

Yup. Mia culpa. Thought I deleted my post after I discovered my error.

Wow this dio reminds me of an old master’s painting. The composition, density of detail, and quality of the figure painting really appeal to me. I just gawped (English slang for staring :-)). This one really inspired me. Thanks for posting it.

Young Won added 5 new photos to the album <No way out!>.

It’s finally completed. I converted the figures but they are originally from the companies Hobby Fan, Dragon, and Coree. I have been using enamel paint. I hope everyone will enjoy. Thank you.

i can’t explain the BAR but i do remember seeing a picture in a magazine of a US Marine in Hue armed with an old Thompson sub-machine gun.