Just a quick question for all the chaps that know the answer instantly … Is there a fairly modern 1975 (that body shell type) onward VW beetle out there in 1/35 ? or 1/32 ? And this is the right category … I have a plan

I guess this one comes closest. Wheather is is somewhere to be found, that is a different point…

so cunning you could put an orange tail on it and call it Mr Fox … was there meant to be a link your post Erwin ?

Oops, sorry. Yes, this one Have to ask: Standard or Super Beetle? They are different.

Problem: Most all the 1/32 and 1/35 kits are of the war-time vehicles, and those that aren’t are from the 60s. I don’t believe there are any that wouldn’t require major scratching to bring up to 70s standard. Different head- and tail-lights, different size front and rear windows, engine changes if you want that visible, and interior changes to the dash.

Thanks both to @golikell and @brekinapez … without giving to much away, A close resemblance to a 70s era beetle would be ok, as the eye will be drawn to the external elements and not the actual car if that makes sense. And thinking about it, I could even go out to 1/24 as nothing else will be displayed with it … I will do some searching as well …

Look for kits that mention being a 1303 version. It was released in 1970 but it continued for a few years and would look the most like a 1975. Those are pretty much all 1/24 kits made by Aoshima and Hasegawa. Should be mostly available still.

Here’s a kit they probably don’t sell in Germany: I figured that too. In 1:24 there are a few kits running around these days. The one that come to mind are those from Revell or Hasegawa…

All results related to beetle 1:24 found on 80 scale modeling websites and the scalemates kit database.

Super-Hobby UK appear to have one:

for around 7 quid, which can’t be bad; the Airfix 1:32 Beetle is still widely available. I mix and match scales when there’s no alternative and given the size of the model I shouldn’t think anyone will notice that much.

Thanks chaps, plenty of food for thought … the cunning plan may come to pass …

Won’t look like a 70s Beetle to anyone passingly familiar with them. Wrong head- and tail lights for one. The later 70s had the large round ‘Elephant feet’ tail light assemblies.

Whilst I appreciate John asked re a 1975 version, VW cars seem to have a fairly long life so say, a model made in 65 could, at a stretch I grant you, still be soldiering on a decade later. I don’t think either the Aeroplast or the Airfix kits have the really early oval rear window, so presumably, with some plastic rod/strip etc (new lights even) both may be ripe for a bit of updating conversion work. However, I fully admit to being no car modeller.

Seriously, all the info and suggestions were very good, and in all honesty, 65 to 75 will work as like I said, it’s just really the basic beetle shape I’m after… I may even look at the 1/24 as in this case, bigger may be better for me

The venerable Airfix 1:32nd Beetle kit first appeared in 1964, given the lead time to design and manufacture it, it may be just to early.

Considering there are still 1950’s models in driving condition today amplifies your comment that the Beetle wouldn’t need to be a 70s model to be found in the 70s.

Since the shape is really the important piece, the year should just be let go of for whatever is readily available. Most people that take a look at his finished product may not know one year from the next; it’s not like comparing a 1953 Corvette to a 2019 model. How many people in here can tell me why 1967 is an important year for the Beetle that makes restoration a PITA? 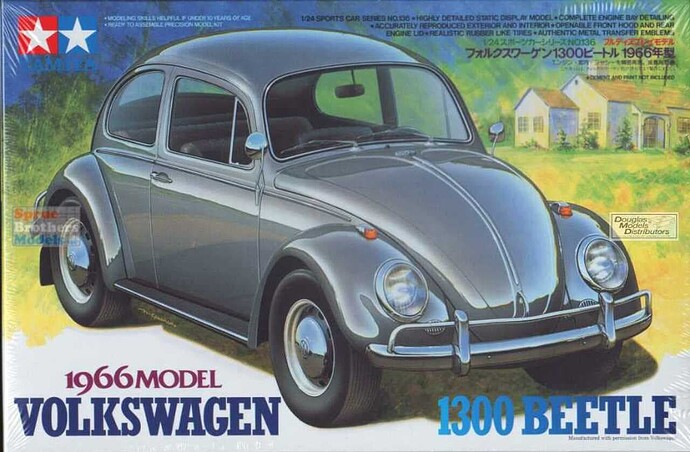