Started a Necron army for 40K which I can now play as I found a local club. I got bored with Space Marines and the Necrons are interesting to paint. I was undecided on the basing but finally settled on a sandy arid base, although at the present only one has a finished base, need to get the other bases finished.

Hope you like them so far, mainly hero/characters except the scarabs and a ‘ForgeWorld’ Tome Stalker. 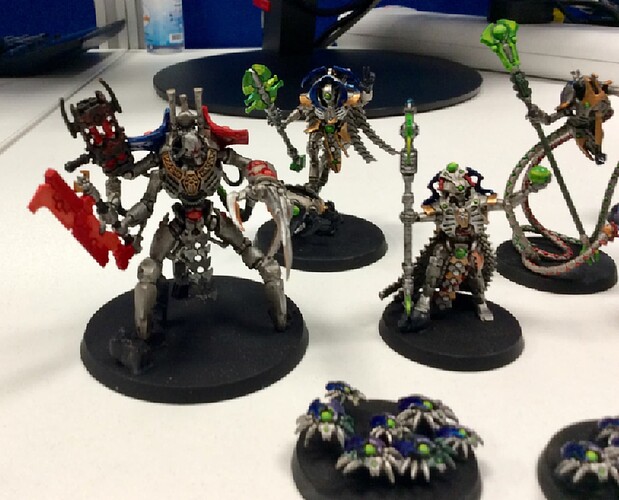 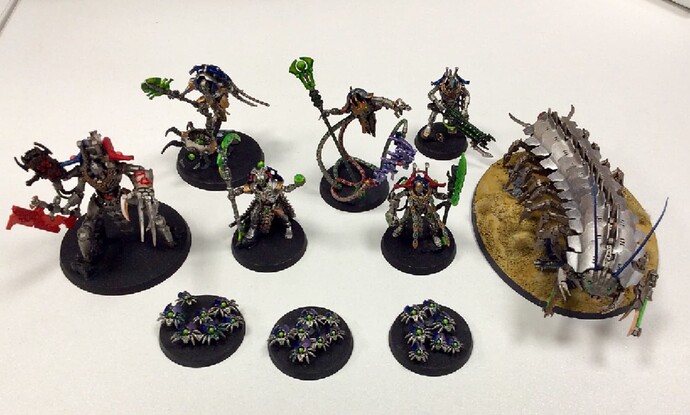 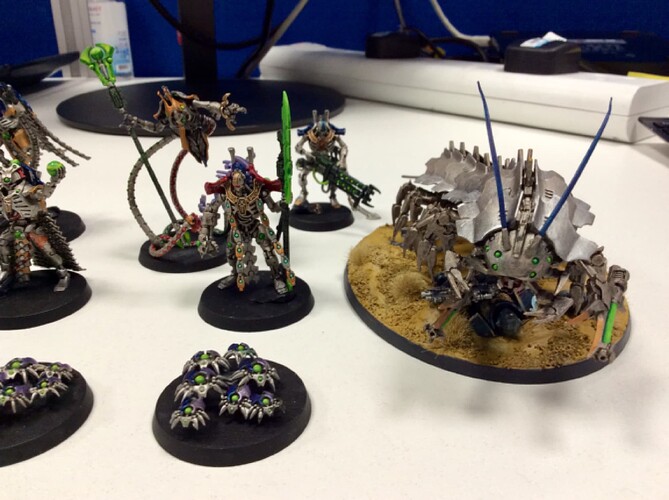 What is the armored millipede called? Cool looking collection of, I assume, bad actors

The armoured Millipede is a Canoptek Tomb Stalker a resin kit from ForgeWorld part of Games Workshop each leg is two pieces making 32 parts for the legs!
Long story short the Necron were once flesh and blood but lived very short life spans due to their sun / radiation. They made a deal with their gods who tricked them by putting them in living metal bodies, they ruled the galaxy then went to sleep for millennia. Now they are starting to awake to find the galaxy over run with young races so are going to war to claim what they believe to be theirs.

So good / bad is subjective.

The army in the game is loosely based on ancient Egypt, but in the far future.
The Necrons feature in the cinematic that was released a couple of years ago with the launch of the latest edition of the game. The rest of the characters in the video are all human, Imperial guard - the standard human solider, Sisters of battle - warrior nuns and Space Marines the super humans with 13 extra organs 3rd lung, 2nd heart etc and power armour. 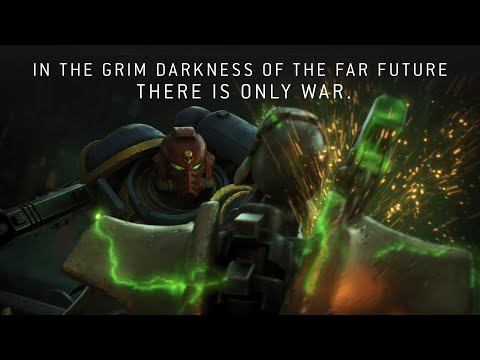 Really like what you’ve done with those. The metalwork is superb and the various colors for equipment like the red parts on some of the figs are beautifully bright and give off a great contrast. I think you’ve got the tesseract glow done nicely too!

Thank you Karl, the red was a bit of an experiment trying to do all my ‘Destroyer Cult’ with a red glow, it worked but needs a bit more tweaking on the next figures. The green glow like wise has been a learning curve and as I have progressed has improved I think!
I’m using a mix of GW paints, Downey inks and Army Painter paints.

I quite like to use 40k figs to experiment with different colors and paints that are new to me. I’ve been using inks as well and find they work very nicely to modify colors in interesting ways.

Honestly, I really don’t need to be tempted by things like this…

Nice start there! As usual with the Hachette partworks I’m dipping into the current “Warhammer 40,000: Imperium” whenever something appeals to me - mostly Necrons. One aspect of the appeal is economy, Issue 50 (17th August) had the full Necron Royal Court for £8.99 as opposed to buying it from Games Workshop for SEVENTY QUID!!! There’s a single Tomb Blade in Issue 61 (2nd November) but the next Necron bargain is the Deathmark/Immortal set in Issue 64 (23rd November), £8.99 again as opposed to the retail price of £26… Well worth grabbing a couple or three copies if you’re building an army. For “Imperium” I’m just grabbing it if it turns up in the local newsagents, but for “Conquest” and “Mortal Realms” if there was something I particularly wanted I would put in an advanced order with “Forbidden Planet”.
So far I’ve only completed one figure (the last-minute converted Overlord for the " Wow you’ve got a great figure!" Group Build) but at least it’s a start; I’m not a gamer but I enjoy converting the figures and some friends who are more into GW stuff have been generous in donating their left-over components to my Bitz Box.

@phil2015 Phil, yes this is the start although I do have ‘troops’ built awaiting paint, I just like to get the command/HQ done first.

@MoramarthT Tom, apart from the first issue of Imperium I missed most until recently and yes did get the Royal Court of which one is in the photos above. I dip into the part work only if there is a unit/figure I like or require for the army, thankfully the club I found is also a gaming shop stocking all sorts of different games and they will get or reserve any issues I’m after, they also can get most wargaming items and give me a 20% discount! I’ve taken to heading to the shop on a day off work with some paints and a couple of figures, setting up on a hobby table and painting while chatting to like minded people.

Of the other games they stock / play I’m slowly building both a Ozzie and US Marine Pacific theatre Bolt Action armies, Ozzie and US Pacific Blood Red Skies air forces and a Marvel Crisis Protocol X-Force team. So Historic and Sci-Fi.

thankfully the club I found is also a gaming shop stocking all sorts of different games and they will get or reserve any issues I’m after, they also can get most wargaming items and give me a 20% discount!

Now that is sweet. The club members I hang with get 10% off at the local craft shop which is decent enough given it’s only a small establishment and marginally economically viable.

I’ve taken to heading to the shop on a day off work with some paints and a couple of figures, setting up on a hobby table and painting while chatting to like minded people.

They tried to set up something like that locally a few years ago but it failed even before the lockdowns; just too small a base population, and an economically depressed one at that.

The local club I occasionally infest also does “Bolt Action” and “Flames of War” but I haven’t seen the other two you mention. Star Wars: X-Wing and Star Wars: Armada seem also to be popular, along with “Necromunda” in it’s current iteration as it is still being expanded on by GW.

@MoramarthT Tom the shop/club I attend is also only a small shop with odd opening hours 12:00 til 22:00 Wednesday to Monday closed on a Tuesday. They charge a table fee of £4 no matter how long you’re on the table and it matters not if as they put it you are ‘hobbying’, gaming or RPG. They back that with a tuck shop with 4 items for £3 but there are cafes and local shops around the area, they also run tournaments for the card games and as a official stockist of Mantic games they run tournaments for those games as well.

For info Blood Red Skies is by Warlord games the same company that do Bolt Action and is a WWII based aerial combat game although it has expanded into Korea.

Blood Red Skies is a 1/200th scale tabletop miniatures game, designed by Andy Chambers, where you command formations of fighter aircraft in battle. Action in the game is fast-paced - with six or more planes per side, a thrilling dogfight can be...

Marvel Crisis Protocol is a small skirmish game with 4 or 5 person teams made of heroes and villains from the Marvel universe. The 40k stuff in just about all its variants always looks extremely cool.