I found this online H.B, not sure if it helps much ? 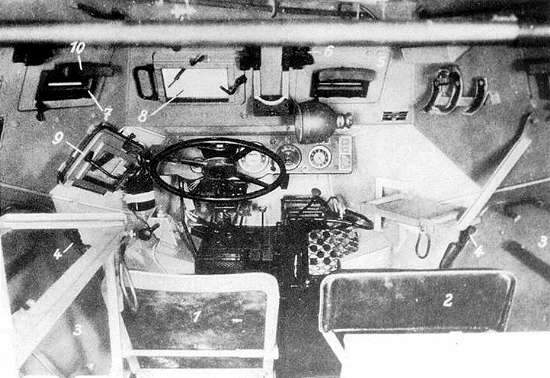 A good start John, thank you!

Even better, also thanks.

This is actually a more nuanced question than it appears. Two questions strike me; 1) would the internal colours change depending on build period; 2) is the Sdkfz 222 classed as a closed or open vehicle? The photos from Toadman’s site are great, but they show a restored vehicle. If the 222 is classed as an open vehicle, which it pretty much is if the screens are opened, would the central part of the vehicle be in the hull colour? So, to answer my own questions, I went and dug out some downloads I did 20 years ago from a really excellent website that’s no longer accessible. They include some taken of the Littlefield 222 restoration (according to the article, a faithful well researched restoration), which is a late vehicle and sure enough, it is all Elfenbeinweiss on the inside except for the control panel and numerous brackets and the gun mounting which are grey and the hull crew doors which match the outside colour (all as shown in Toadman’s pictures). Since the 222 is an “early war” vehicle, although production continued until 1943 it’s fair to assume it wasn’t materially affected by the change to Dunkelgelb, except that the exterior would be overpainted, however, like vehicles despatched to the DAK, the inside of the hull doors was left the original colour, Panzergrau. A period black and white overhead shot, taken at Bovingdon during the war, of a clearly three-colour camouflaged 222 in for evaluation, shows the internals to be a very pale colour which would fit in with it being painted Elfenbeinweiss. This appears in the old Milsom and Chamberlain title on “German Armoured Cars”. So, apologies for taking a very roundabout route to get to the same result, but my sources back up what Johnny and Paska have already stated.