What are they Waiting for?

Something to look at. What do you think? 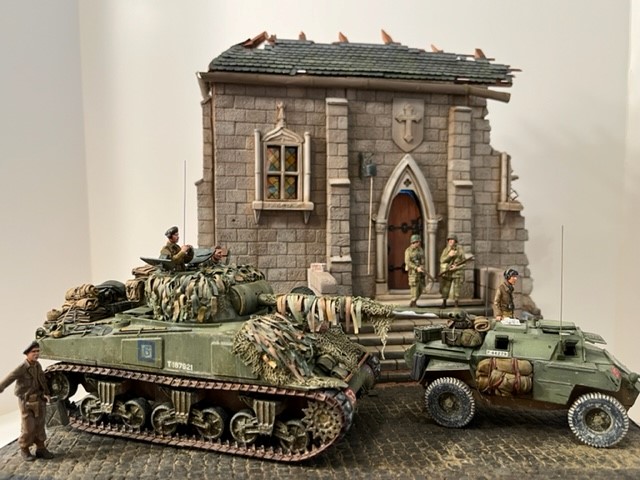 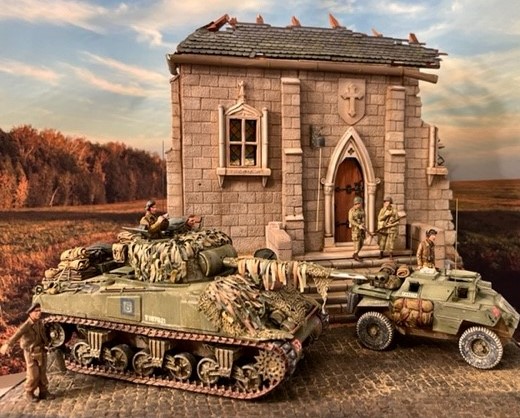 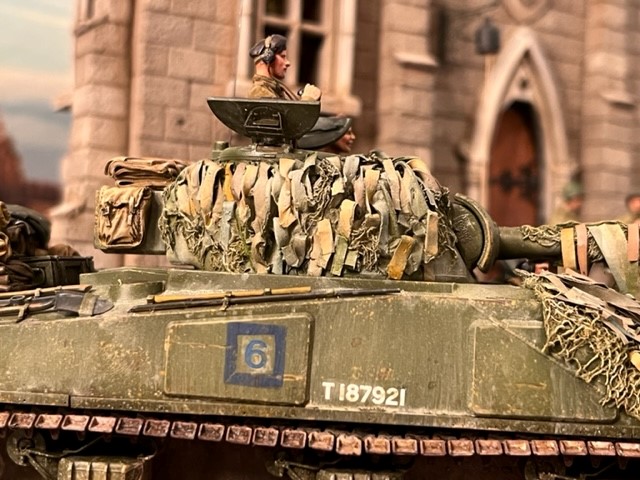 This Firefly Sherman is the Asuka kit, loaded with the Black Dog Hessian tape turret and stowage set. (I always wanted to try that camo technique.) The tape on the gun barrel and on the hull are just cut pieces of paper. 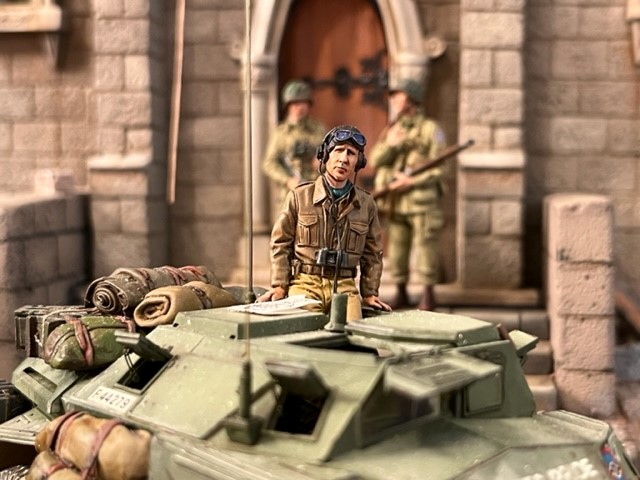 The Humber Scout Car is from Bronco, and its commander was included. The stowage is from Value Gear. 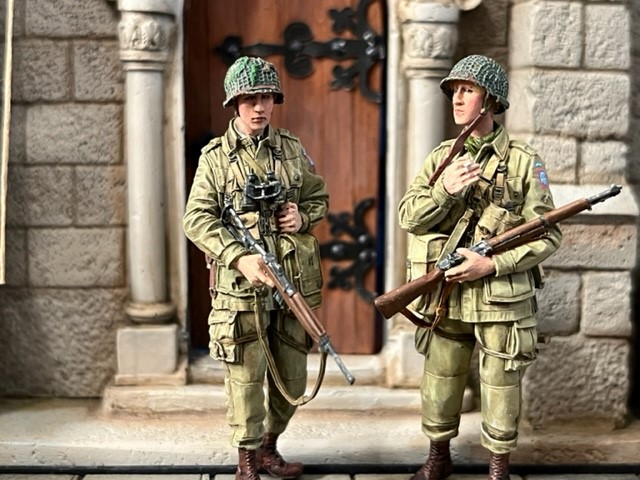 The Firefly commander is from Alpine, as are excellent the US Troopers. (Note: I’ve read that some of the paratroopers continued to wear their older jump uniforms during Market Garden, while most had converted to the 1943 model fatigues.) 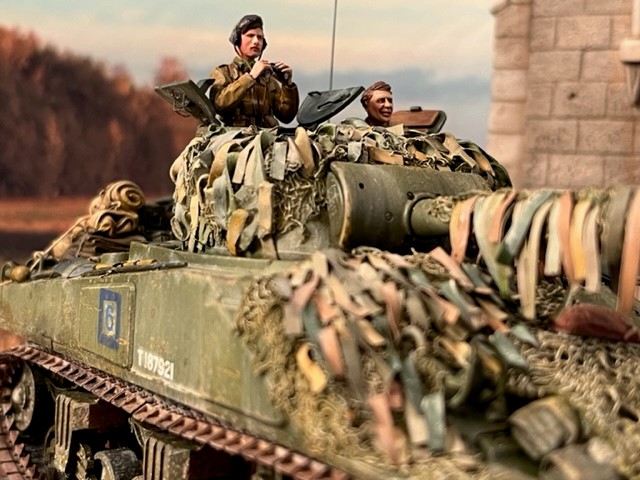 I haven’t built much in the way of British armor, so I had a difficult time with the vehicle markings and the uniforms – a lot of research was required. I hope I have those aspects reasonably correct… 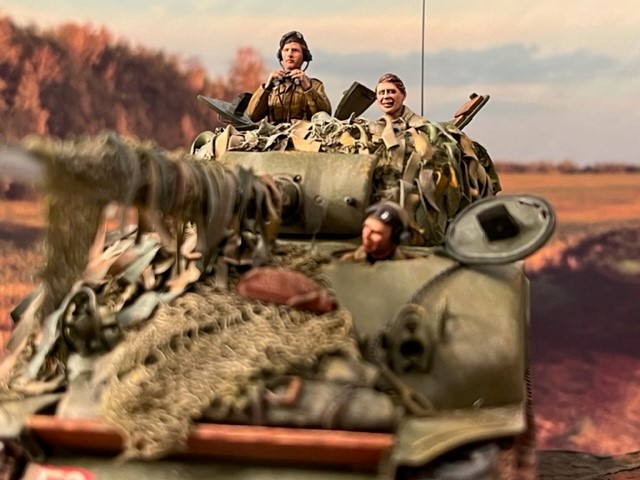 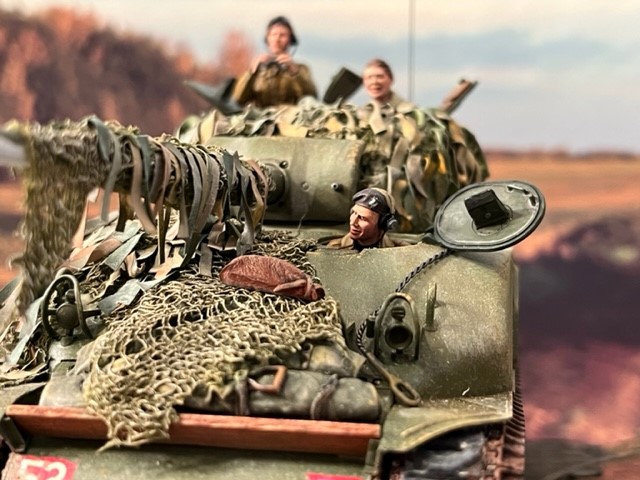 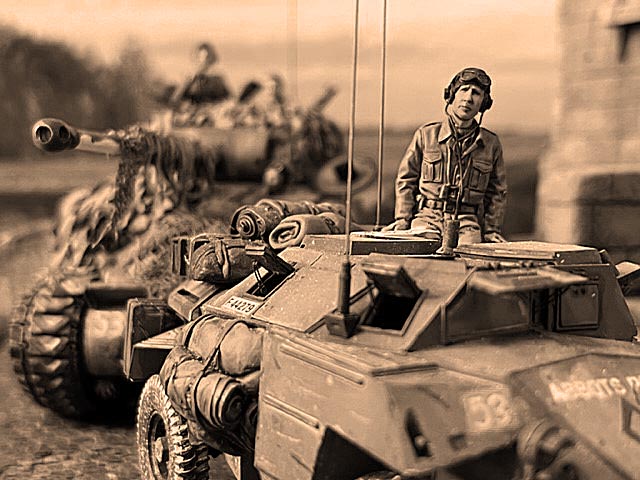 As always I enjoy shifting some photos to Black & White, to gauge how the diorama compares to actual period photos. 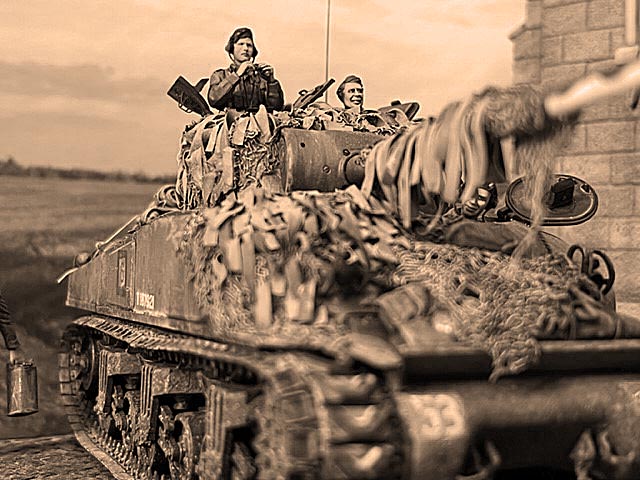 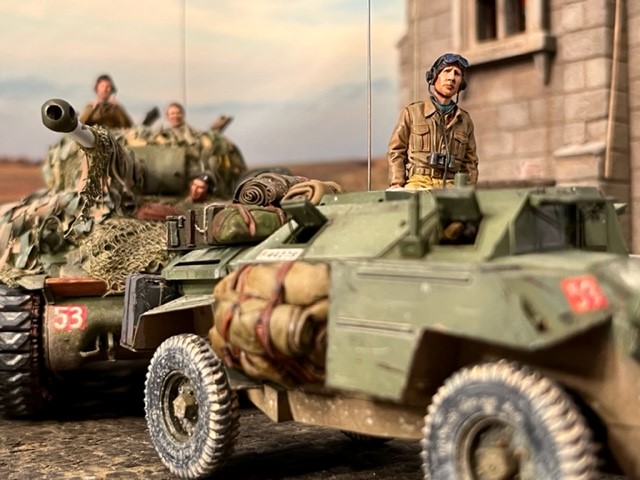 I tried a new approach to figure face painting on my last diorama (The End is in Sight) and it sems to be working. At least well enough for me.

It’s fairly easy, and those of you struggling with that aspect, might want to give it a try.

I mixed up a skin base coat from Tamiya Flesh. Out of the bottle, it’s too bright and yellow for me, so I toned it down adding some brown and a touch of blue. I purposely left it lighter than what I consider a normal (white male) skin tone, though.

After laying down a white (Tamiya) rattle-can primer I painted the head with my custom skin color.

Then I coated it with one or two layers of the Citadel red wash (‘Reikland Fleshshade’).

It works beautifully, to darken the base color, add a reddish tint and fill in the deeper (shadowed) areas of the face.

I then add, to the deepest areas of shadow and the cheeks where a beard would form, small amounts of the Citadel brown wash (‘Agrax Earthshade’).

At that point I wind up with a quite acceptable face. One could stop there.

I usually go back, though, and use AK or Vallejo skin tone colors to add highlights, where appropriate (nose, top of the cheeks, forehead, etc.)

I seldom do anything with the figure’s eyes, as in scale, a squinting soldier’s eyes are mere slits.

If I do feel the need, I drop in a touch of light tan (almost as a wash so it flows into the eye socket) for the whites of the eyes, and then place a dot for the iris, using a .005 tipped Micron ink pen – those things are perfect for truly tiny lines and dots.

Details:
The Sherman is the Asuka kit.

I added the Black Dog turret and stowage, as I really wanted to try that camo netting and Hessian tape look, common on many British tanks.

Black Dog’s barrel with camo, was broken and warped, so I used the kit’s barrel and added my own camo netting and tape. I also added it to the hull. It seemed to work out pretty well. Note that on a Firefly, the bow-gunner’s station was eliminated, so that hatch was only used to load the main-gun ammo stored there.

The Humber is from Bronco. (The kit’s instructions were terrible!)

The US Airborne troopers are from Alpine, as is the tank commander.

The other British crew figures are from MiniArt, with Hornet heads.

The monastery ruin is (I think) an old Verlinden plaster casting, pulled from my stash.

I have also made a similar tape camouflage on a french Peugeot P4 several years ago. 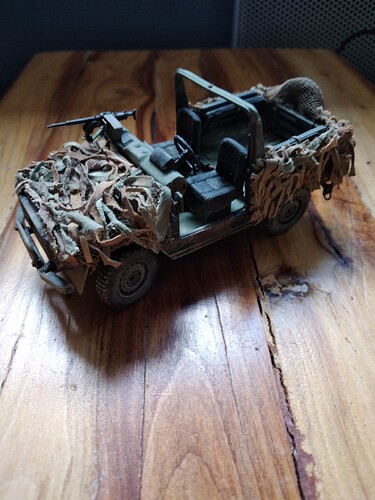 Superb work and result Ralph, ticks all the boxes - the more I look the more I see. One of the best of 2022, maybe the building could look a bit dirtier but that’s just me being picky. Bravo

Beautiful diorama! But it was the Grenadier Guards who crossed Nijmegen Bridge in conjunction with the 504 PIR river crossing, not the Irish Guards. And yes, the 504 continued to wear their M1942 jump uniforms instead of the new M1943 uniforms worn by the rest of the 82nd during Market Garden.

I read that 2/Irish Guards led the way to Nijmegen, and supported the Waal crossing. But you’re correct, the Grenadier Guards drove over the bridge. I had a hell of a time creating the “53” markings for those vehicles - ‘51’ would have been easier.

Very nicely done. The back drop images are well done and give a real look with some depth. Great job all round and nice info about the face painting and another method to try.

These are the essential elements to get right for a Market Garden dio- the right vehicles and correct troops. You’ve managed to bring them all together nicely in a scene that shows them off without them being overshadowed by scenery or, for that matter, each other. The building itself is, I think, just the perfect size and is a real eye catcher without sort of taking over the scene or looming over it too much. I like the way you have done the brickwork and the cobbles- they make a nice contrast to the green and dirty vehicles. The addition of well painted stowage and camo wraps also adds even more color and visial interest to the vehicles. The figures populate the scene well too- just enough of them so it looks realistic but not too crowded. You’ve certainly worked well on their uniforms and their faces.
All in all this is particularly nice scene and one I, and I’m sure lots of other modellers, will learn a thing or two from.

Great looking dio! And thanks for the face painting instructions, I will have a look at those shaders, as I am using some other Citadel stuff and like them.

Thank you for the detailed review. I appreciate that you took the time to provide the feedback. I am a bit disappointed with the ‘staging’. When I took the photos I realized that the two paratroopers should have been placed on the top step. They’re somewhat masked by the commander of the Humber. Oh well - nothing’s ever perfect…

We can be our own harshest critics from time to time but I think you have the right attitude in that you have highlighted something (the staging) that will be a good lesson for the next dio you come to make.

Beautiful job Ralph! This is a battle that I’ve always had the most interest in and wanted to do a diorama about. Very inspiring work! Love all aspects of it especially the Firefly!

I am a bit disappointed with the ‘staging’. When I took the photos I realized that the two paratroopers should have been placed on the top step. They’re somewhat masked by the commander of the Humber.

I think the Paras are fine where they are. Putting them on the top step might actually bring them too close to the building. IMHO. You could always walk away for now and revisit the scene later to shoot from a different angle.

Looks great, the figures seem very well integrated into the scene, and the paras look as if they’re standing in the natural place if you ask me.

Great expressions on the faces. Also love that scrim.