I belive CU stands for Curtiss Aeroplane and Motor Company.

Kinda what I was thinking. Means nothing when it comes to what engine, how many guns,etc.
Wonder what other plants built them besides Curtiss/ Buffalo? Now to figure out what the ones in the 20th PG photos are and what markings they had in the days after Pearl Harbor. Photos are dated 1940 (couple) and 1941, but not a month.

It sounds like your photo caption is incomplete
The “CU” should be part of the info listed on the aircraft data block that is usually stenciled below the windscreen that will include the aircraft type, production block, serial number, etc.
Here is an example. 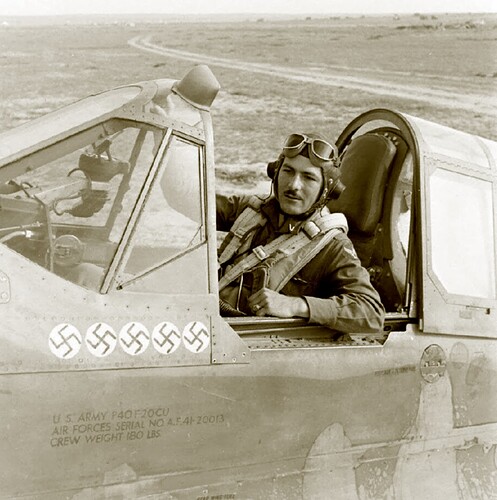 I did a bit more digging, and according to the Detail & Scale books, the P-40 CU was the initial production variant, before the B. Just under 200 we’re produced. The main visual difference would be a single .30 cal. gun carried in each wing, along with the two .50’s mounted over the engine. The B would introduce a second .30 in each wing.

AH! As I suspected. CU has nothing to do with the model , it is the Curtiss company/ plant code. Hence “P40F-20CU” … P40CU would be a P40A … course you wouldn’t mark it "“A” if you didnt know there would be a “B”. Gonna have to look closer at the pics and count wing guns.