What is your experience with AFV Club half track model kits?

By now some time ago, I have finished some studying on German Half Tracks of World War II.
And I was taking a look at the model shop’s website which model to buy.
I was wondering about the AFV ones that were offered and I copy pasted the information provided on the website in scalemates.com.
Strangely enough I didn’t get any matches with the provided information.
I remember one time to have asked a somewhat similair question on the old forums about AFV their German gun kits.
And they said that they were good quality.
I was wondering if also good words can be said about the half tracks of AFV and if it is in general a good recommendation.
For some time I’m building more Tamiya kits, because I’m liking the good quality and that they fit so nicely together.
I’m not that experienced with making adjustments to parts etc to make them fit better.
Maybe something to learn in the future?
Anyway, I hope you can help me out. 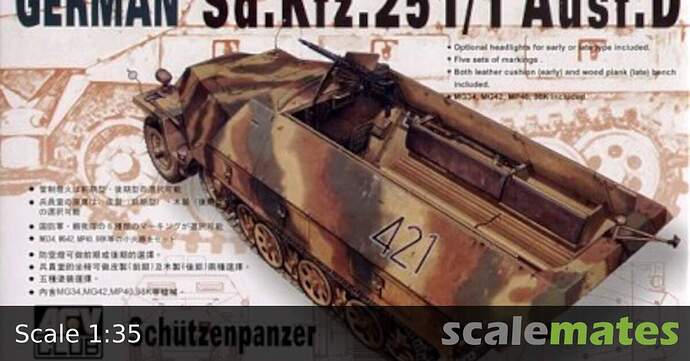 They are not my thing so I cannot say how those kits build but AFV is not Tamiya in general so more care will be needed with assembly and it will have larger part count.

The only AFV Club Half-Track kit I have some experience of is their Sd.Kfz. 251. There was more flash than I was expecting on the kit. Some of the holes to fit the body sides to the chassis were barely open. And even when I cleaned them up, the tabs that went in them would not fit. I also attempted to add the seats to the floor and I had to widen the holes to get the seat pins to fit. I saw this as the tip of the iceberg and immediately got discouraged as I was trying to build 3 of these for various campaigns.

But I would say if you know this going in and are prepared, they make into a nice finished build.

One thing I’ve experienced, similar to Dragon 251’s, is that it is much better to glue down the front end of the upper hull (engine compartment), and when that is firmly set-up (like, overnight), glue down the crew compartment upper hull and secure with rubber bands, etc. There always seems to be a see-saw effect with the driver’s front plate area being the fulcrum.

What about their separate track kits?

Thank you all so far for your helpful answers.
From what I’m reading, I think I will decide not to start with AFV kits.
It sounds a bit to hard and complicated for the skills I currently got.
Maybe some time in the future, but I think I will look for other manufacturers for a better kit.
And a better build experience.
Thanks again for the usefull answers.

My experience is that Tamiya is easier to build, AFV Club has some really tiny parts, and Dragon is somewhere in the middle. Haven’t build Zvezda though. Nice that you can get pretty much every major variant of this very diverse vehicle.

I have built three. There is some parts cleanup, like the rear axle, drive sprockets and a few other spots where holes need to be opened up to get a good fit, but the detail is nice, the vinyl tracks are quite flexible and there is good variety of versions. They don’t just fit together but with dry fitting and cleanup where needed they turn out quite nice. The only thing I can compare to is the old Tamiya Ausf. C, and the AFV club were much better than that. Read reviews or better, look for actual builds. Type in the version you want to do and see what pops up. I would be quite happy to build another.

No experience with the AFV Club 251 kits. However, the following is an excellent review on Perth Military Modeling of the kit that might be of interest.

One thing I’ve experienced, similar to Dragon 251’s, is that it is much better to glue down the front end of the upper hull (engine compartment), and when that is firmly set-up (like, overnight), glue down the crew compartment upper hull and secure with rubber bands, etc.

Good advice indeed, other than that I do not see any major problem with their kits, which are excellent in regards of measures, accuracy and detail. I doubt you can anything get better than that.

Thank you all again for providing this nice and very informative answers.
I will think of it and take it into consideration.