What is your opinion on the Renault R35?

I have watched some video’s about the Renault R35.
Including a video of it driving around on some event in France.
And the Get inside the chieftains hatch video.

First I must say, I found the engine noise very loud, in the video where it drove around.
Is this just the ‘normal’ sound of the engine?
Or is it something else, I’m finding it very noisy anyways.

Furthermore, I’m finding this tank a very nice looking tank.
The shapes and sizes on this tank are very nice.

Also, why are a lot of French WW II tanks so colorful and why did they have such complicated camouflage schemes?

One last thing to point out, I found it very clever they just reused an old gun of the Renault FT tank that was obsolete.
And this tank replacing it.
To safe money probably and reuse old stock they had laying around.

Let me know what is your opinion, I’m curious to find out.

My guess is the color scheme is a holdover from WW1.

The R35 " only had a crew of 2, a driver, and a commander/gunner, this one-man turret design, was a significant flaw which was recognised and fixed in later tank designs. As the commander had so many duties to do in battle, it was almost impossible to aim, load and competently lead the tank. What’s more the turret either had to be hand cranked or shifted with the commanders weight, additionally he had to stand, as in the production version there was no seat for the commander. Many crews installed a make shift seat for the commander to sit on during driving, while not in combat.

For armament the tank had a 37mm L/21 SA18 gun and a 7.5mm MAC31 coaxial mounted Reibel machine gun. While these guns were suitable for infantry support, and in knocking out gun nests and light armoured cars, they were utterly insufficient to take on more modern designs and it would even struggle to penetrate its own armour. The 37mm gun penetration was very poor, and had a maximum penetration of only 12mm at 500m. It could fire about 10 rounds per minute, and one of its few positive points was that it was easy to operate and rarely jammed."

I guess that sums up its flaws quite well…

It was pretty typical of the thinking and doctrine of the time, and it compared technically pretty well with many of its contemporaries.

It also has an appealing Art-Deco aesthetic - it is VERY French.

I’d say that it was the perfection of the WWI FT-17 design and was expected to perform the same mission. As with so many military designs, weapons and doctrines, it was totally suited to fight the last war.

I think it’s a very nice looking tank, but it just wasn’t very practical for much else other than being a mobile pillbox. I’ve heard it had decent armour (though I’m not exactly sure), so it could be quite effective in holding down a certain area, but overall it seems to be very limited by lack of a radio.

I can’t read French now at the moment.
But the information you took from English website is interesting.

I’m interested in that anesthetic art thing you mentioned.
Why is it very French?
Why is it typical French, didn’t do other country’s something like this as well?

A video of the chieftain on YouTube said that even anti tank rifle rounds could punch through the armor.
Since the casting was still in development at the time.

You see, at this point in time, and even later, French tanks have a mixture of flat plates, rounded plates, and casted plate transition all over the turret and hull. While other countries went for full flat plating, though angled plating, very typical for the UK until post war and the US until the WW2 and for Germany.

Indeed, this design and manufacturing was not great because of the technology then, but other nations did it later on.

I can’t read French now at the momen

The French were the first using cast armor?
I think it was easier to construct, since you only had to bolt de section together.

Would be interesting what your opinion on this is.

Casting big pieces of metal were done all over Europe. I don’t have enough expertise in history to say if France was the 1st to use it for armored vehicle. At this stage of fighting vehicle development, there were so many prototypes, so many idea, with so limited technology, and the document about them are scattered or lost by time.

Casting is easier to piece together and stronger, but harder to to make, since each piece are much larger and it is hard to manipulate them. Smaller, flat plates are easier and faster to produce, wielding them together doesn’t take much more time. As a matter of efficiency, tanks from in the cold war era used both method, until steel thickness protection became obsolete.

Well I don’t have much to contribute here but I like the looks of this small tank and will be adding a model to the stash. However, I’m not sure which kit to purchase that would give me the best overall results in detail? So my question is which manufacture produces the best kit of this vehicle to date?

modelbouwnederland, thanks for posting this topic, I’m not trying to hijack your deal here.

No problem.
I have build the new Tamiya kit of this tank.
You can find a post of it on the forums.

With regard to the aesthetic, the design has a strong art-deco appearance (which was an art movement that had its origins in France just before WWI). There are a number of other French tank designs of the interwar period that share this styling motif - H35/39, SOMUA S-35, FCM-36, the Char B1bis, the Char D2, the Char 2C, etc. I suspect that many of the designers working on these AFVs were heavily influenced by this aesthetic as they combined form and function.

French tanks also more universally employed / displayed very elaborate camouflage patterns, many of which employed not just mimetic terrain and vegetation colors, but also bright colors (such as sky blue) with bold, curving “puzzle piece” shaped spots, often separated with black lines for even more emphasis. France was the only major power to employ such bold camouflage patterns in a nearly universal manner.

This combination of the art-deco design and bold camouflage patterns is why I think the R-35 has an almost uniquely French-look that is shared by many of its French contemporaries.

(The US cast hull M3 and M4 medium tanks share, IMO, the same art-deco styling, with the M3 cast hull medium the most pronounced non-French example that I can think of.)

The issue of using large castings for AFVs was a technology that was only just being developed and perfected. It was not as simple and easy as one might think. It did offer significant advantages in the costs of manufacturing and was also thought / believed to offer advantages in ballistic resistance to shot and shell.

Unfortunately, very large castings (like that used on the US M3 and M4 medium tanks) were very difficult to make with consistent thickness and hardening through heat treating. The mold making was also quite challenging, and only some very specialized firms were capable of manufacturing such large castings.

Thank you for your very informative reply.
I can learn a lot from you.

I would be interested in a 1:35 scale model of this tank. 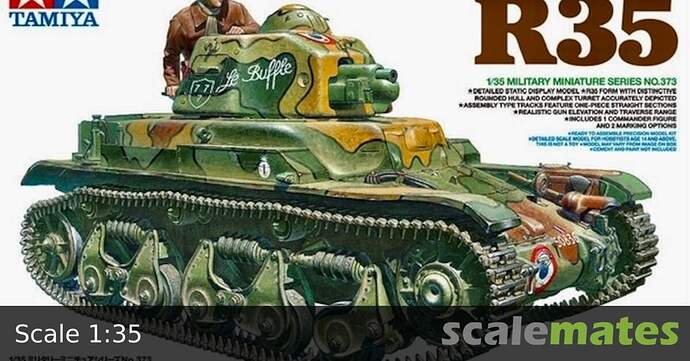 Look inside the box: 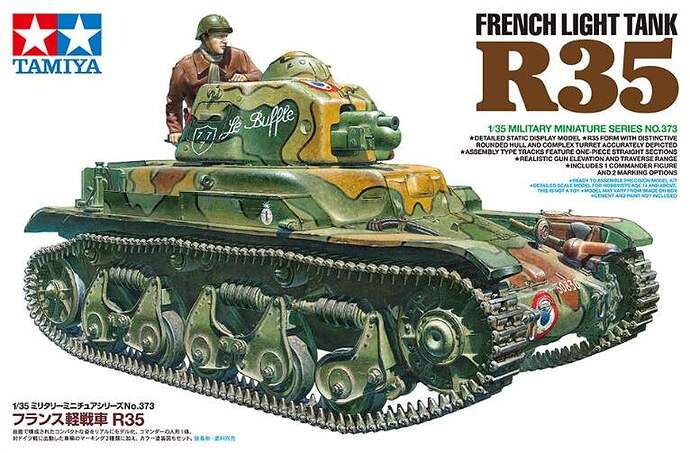 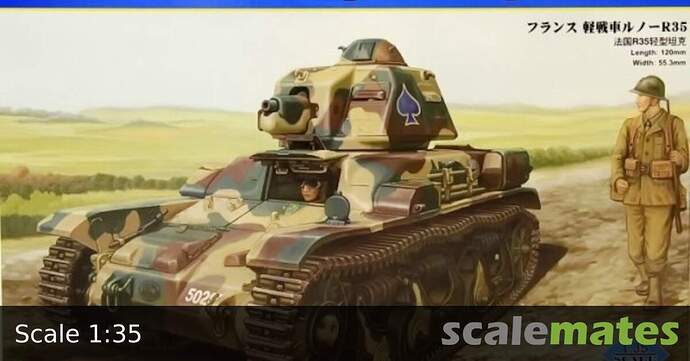 A look inside the box, the small images are clickable: 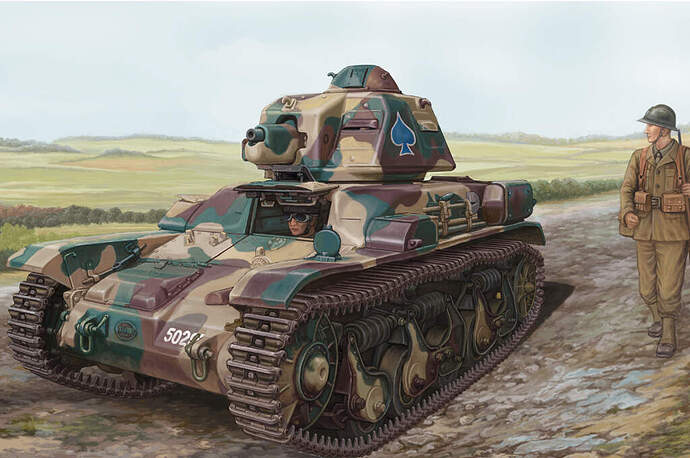 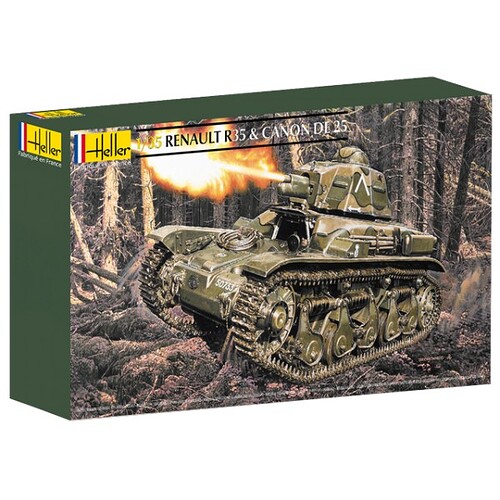 I would stay away from this kit if I were you …
Kit history with all the re-boxings by SK-Model. Gunze-Sangyo, Heller and Heller-Humbrol

Scalemates overview page with “everything” related to the R-35, includes links to builds and reviews of the various kits: