I wonder if anyone can shed any light for me. I’m doing a commission for some 144th scale modern (i.e. contemporary) motorbike troops. The gentleman I’m doing it for has been able to supply my with a fair number of pictures, but one thing neither of us is entirely sure about is what make of bikes would likely to be used and they certainly aren’t consistent! (And I know nothing about motorbikes and thus am not able to identify any he sent in photos).

Now, given this is such a small scale, to some extent there’s a bit of leeway here - he wants both irregulars on bikes as “bad guys” and spec ops troops on bikes as the “good guys.” (We’re only doing the one bike fundementally, just changing the poses and gear of the riders/pillion riders). I could likely just make something up entirely - I have a very old generic dirt bike model, for example - but these days I prefer to do something that is at least nominally plausible for an actual vehicle.

Obviously, there’s not going to be any kind of standard, but any kind of starter for ten would be useful. (If there is an AK-47 of military motorbikes, that would be the sort of thing I’m looking for.)

My initial research has suggested that the Kawasaki KLR650 might be a good compromise for the dual-purposes, as it is apparently widely available was also used by the USMC. (Though as usual, it somewhat depends on what I can find technical drawings and or (consistent) photos of.

If anyone could suggest any plausible alternatives, it would be very helpful.

Well, it’s not like they just go down to the local dealership and buy a fleet of dirt bikes. They’ll be using what ever is on hand and running. Consider that the USMC has very deep pockets and, comparatively speaking, can procure anything they want. Not so much with “irregulars” (which pretty much is the definition).

Pretty much anything that says, Yamaha, Honda, Suzuki or Kawasaki and is in the 250cc or smaller range, and not necessarily just “dirt bikes.” Light street bikes are probably more common than dirt bikes. Also, not necessarily new. As long as it’s running.

In 1/144 scale, I’d guess you’re looking at bike models around 1/2" long and maybe a 1/4" tall. At that size, the subtle details that differentiate most models and brands from each other might be pretty hard to see.

Edit: Heck, I didn’t even know it, but Pakistan has a pretty robust domestic motorcycle manufacturing base. Aside from license built copies of Honda, Yamaha and Suzuki bike, some indigenous makers are Sohrab, Habib, Ghani, and GNG. All probably good choices for bikes to be found in Afghanistan or other parts of the Islamic world.

My friend (whose name is also Rob) both rode this Yamaha in Afghanistan. We primarily used it to ride out to to the seven OP’s scattered around our firebase to pay the AMF we hired as security.
There were a lot of different bikes in Afghanistan, although none were ever sold there. They were all purchased or stolen from Pakistan. 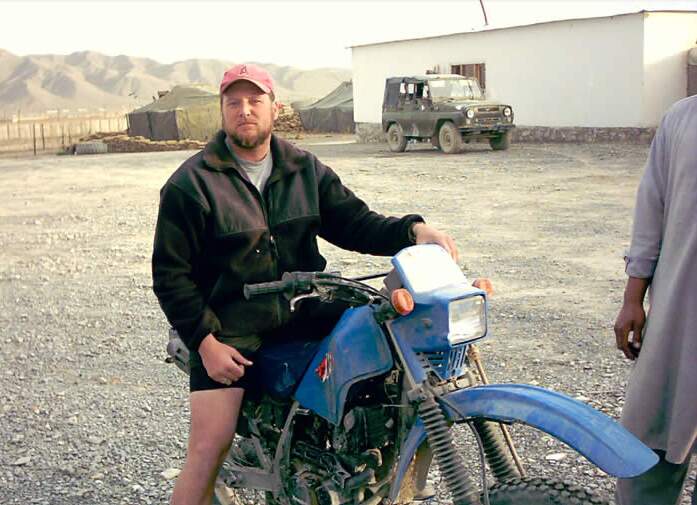 It’s virtually identical to this one: 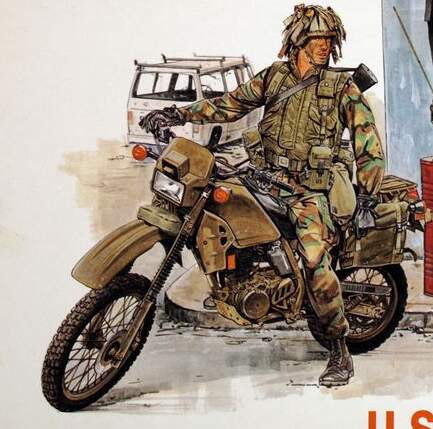 There is/was a 1/144 JGSDF motorcycle made by Matuo Kasten : 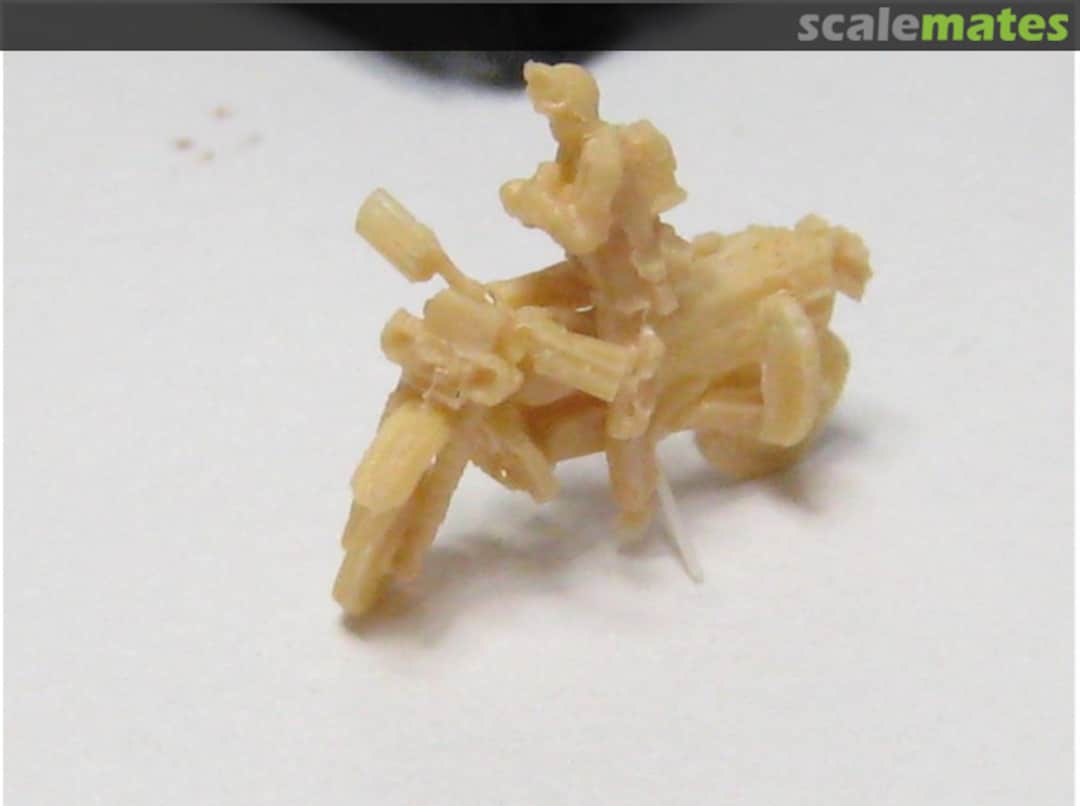 Could be a Honda or a Kawasaki…

Which looks like a tiny version of this one… 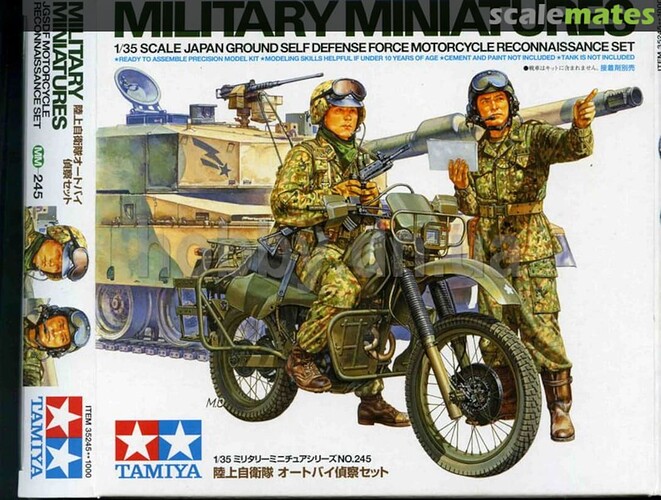 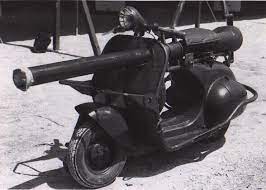 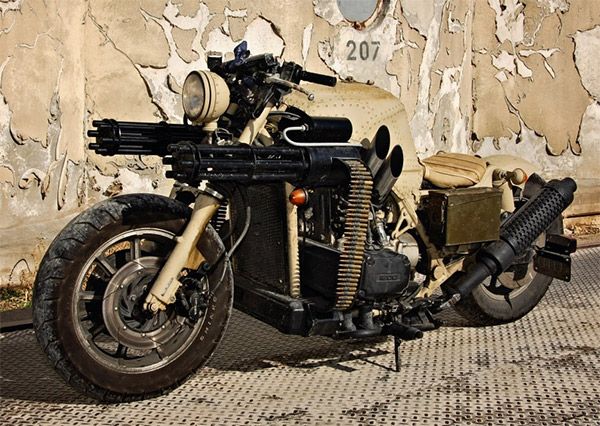 Maybe your a BMW fan? 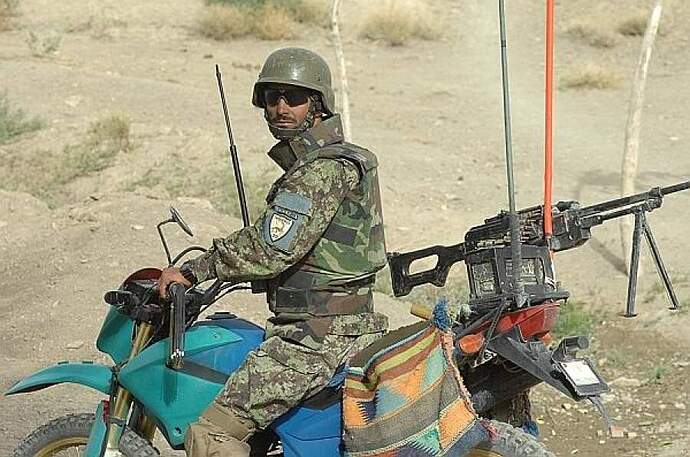 The brand escapes me. 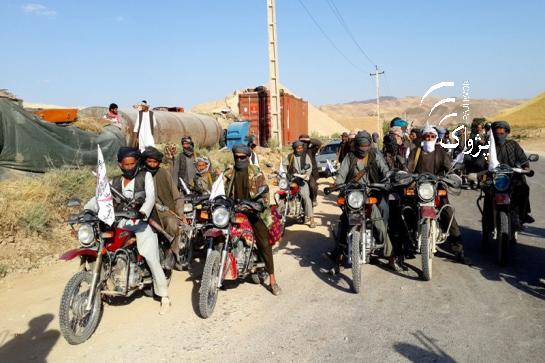 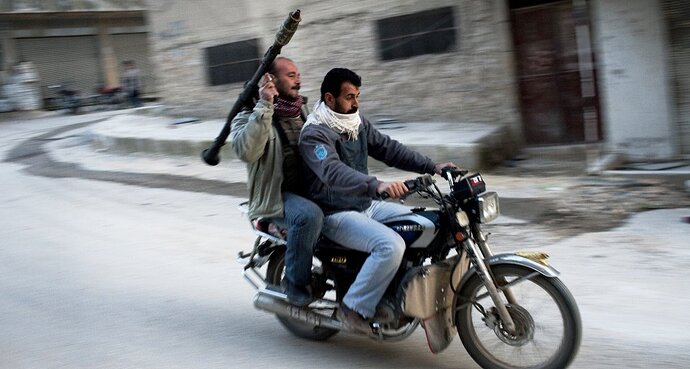 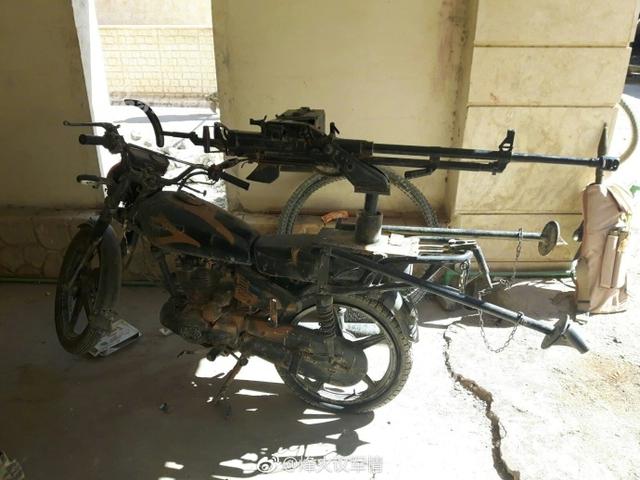 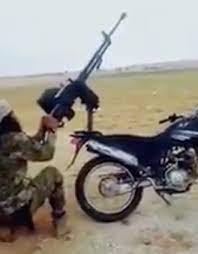 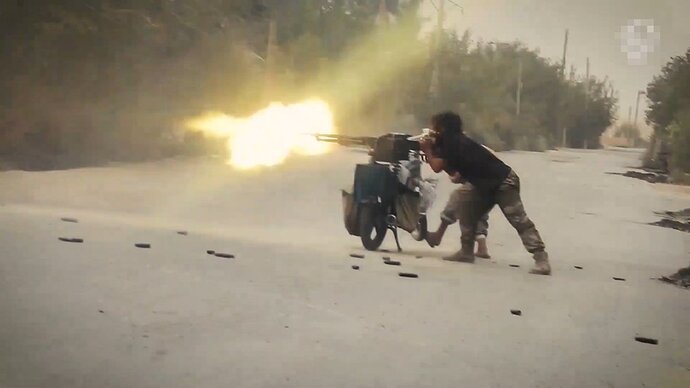 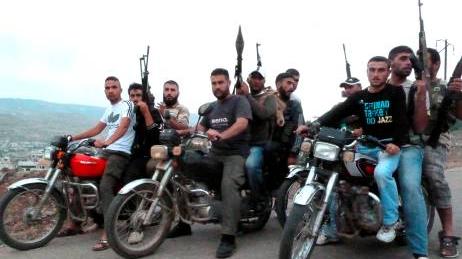 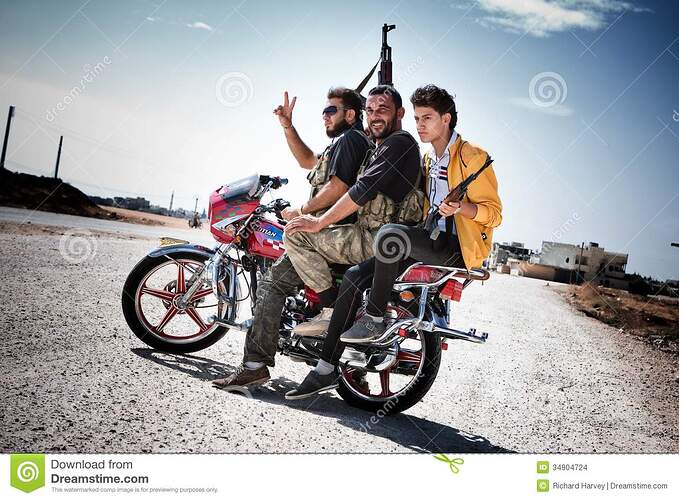 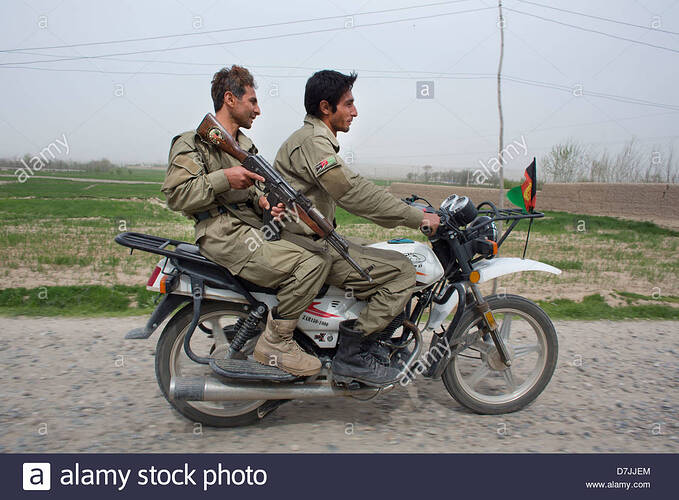 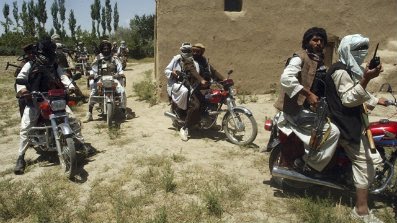 Right. Thanks folks. Guess it’s basically just going to be my best judgement, then - I’ll have a good look around and see what technical drawings paired with good photos I can find that match for a specific bike.

@TopSmith The Vespa is a bit before my period, but for my own sci-fi stuff, the gatling one there would be rude not to! (Especially as my sci-fi irregular ranges (not at all heavily based on Command & Conquer Generals GLA!) have a tendancy to slap gatlings on everything!) A little bit of looking even located me the make of that bike (thanks yo you saying it was a BMW) as well as more photos from other angles, so that could well be do-able! But that will have to wait for another time.

Being somewhat of a weapon/motorcycle guy, I must respectfully disagree. While that is a boxer style motor, it’s not a BMW. It’s a four cylinder, which makes it more than likely a Honda Gold Wing. In fact, judging by the wheels, that is indeed what it is.

Here is my own foray into the world of weapon themed bikes: 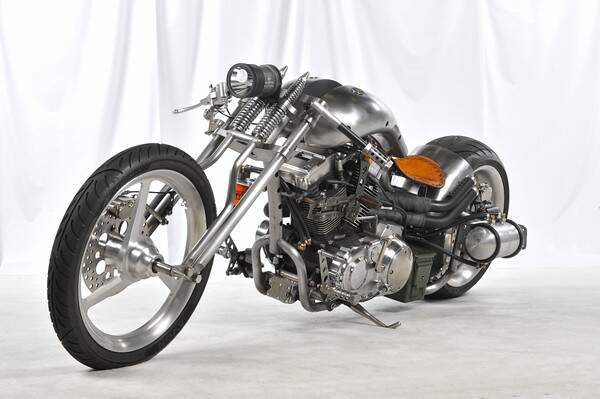 Yeah, that’s what the article I found said a “1984 goldwing;” the “BMW” part seemed to help me locate that particular article, so it’s all good.

(My knowledge of motorcycles is limited to knowing they (usually…) have two wheel and I have HEARD of some of the manufacturers…! Beyond that, it’s all alien to me.)

In the event, my started for ten has been the KTM 500 EXC, which is what I read what make of bike the Lithuanian specops were using in Afganistan. It’s a reasonable compromise, I think, suited to both sets of riders (as I’m only doing the one bike model), since it’s (according to wiki) a widely-available manufacturer. A little up-market for the irregulars, maybe, but let’s just assume they got lucky on nicking a set…!

(Watching a video on youtube on said (civilian version) bike (since unlike tanks, there’s no photo walkarounds, so the best I can do is videos and the pause button), the language the gentleman is talking about the bike is completely foreign. Even though its in English…!)

One article about the 1984 Goldwing: 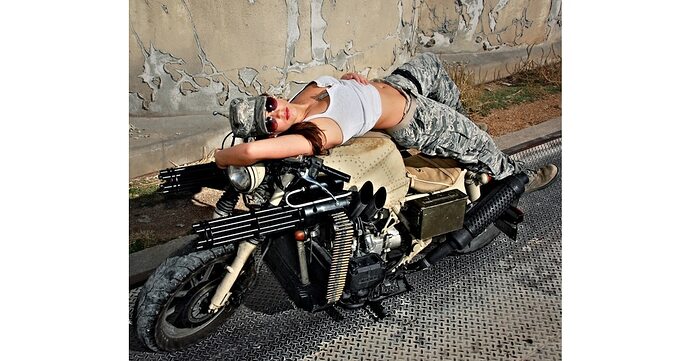