What you call Sd.Kfz.?

"Sd.Kfz. "as “Sonderkraftfahrzeug”, you may well know what means it.
I don’t care at all in text.
But, what do you call in oral, when you discussing or talking about these?
Or know the call of abbreviation?
If there is a way to say or do something that is frequently used in native, I would know about it.

Too many configurations, too broad a spectrum, for one title (IMHO) aside from “military vehicles”.
For example… if it’s a halftrack that’s what I call it.

Well, I’d call an Sdkfz 7 an Sdkfz 7 in a post, because I think most people interested in German WW2 vehicles would know exactly what this means. But I’m pretty sure that’s not what a WW2 German squaddie would have called it. For example the 3 ton armoured half-track, Sdkfz 251, was known to the Wehrmacht as an SPW (Schutzenpanzerwagen). The large unarmoured halftracks were known as “zugmaschinen” I believe, or “halbkettenfahrzeuge” (half track), in the same way we would refer to a truck as a truck. Personal testimonies frequently refer to any armoured vehicle as a “panzer” (“armour”), whether it’s an armoured car, tank or whatever.

No idea what the correct way to say it is.

How we refer to weapons and how contemporary servicemen do can vary hugely. For example, my Dad, who served as a radar fitter in the RAF in WW2, always referred to a SMLE/Lee Enfield as a “303” (the calibre for those who don’t know).

Seems that virtually all German military vehicles were officially prefixed with the SdKfz so it’s no big deal to just drop it. SdKfz 171=Panther, and so on. Kind of like M4A3E8. Who says that. It’s an Easy Eight. We don’t even usually add Sherman.

Thank you for all accurate comments.
I didn’t want to be a know-it-all enthusiast, so I appreciate these.

It’s a very simple and distinct. Easy Eight! That’s exactly what I also have to say.

Another annoys, It is the case that I go to a store and ask for.
“Tiger”, or “Wirbelwind” is easy .
Have you ever any problem when ordering AFV model with only a prefixed number? e.i. "Sd. Kfz 251/*.

At hobby store(a corner of general electric store in JPN) , the clerks are amateurs when it comes. so they don’t even know the word half-track and unable to read the text of import models package.

I know it’s totally off but I go with SKIDZ

and my hommies seem to know what I mean

Sometimes you just need more words to clarify what you are talking of. My conversation with a newish modeller from years ago:

Now I could add Tamiya’s ‘Marder 1’ to that list…

That reminds me - when friends/rellies see a tank on the road & report back to me - it 's generally described as - we passed a tank, it was painted green/yellow - and then expect me to name it, sight unseen.
Sometimes I manage, more often roll eyes & forget it.

Back to the question - I don’t generally buy Halftracks, but I’d probably go with German halftrack & work from there, Sonderkraft fahrzeug would just get a blank look, Sdkfz the same.

Hundert noine would get similar, though Me 109 would be more recognizable.

Among US collectors, the SMLE is usually referred to as the British Enfield.
An SMLE made in India or Canada is still a British Enfield.
Of course that does not clarify which pattern/model. Nor does it explain the P14… which is referred to as… the P14.
That distinguishes it from the American Enfield aka the M1917.
Simple, right?

Peter,
It’s an fine episode and the punchline

.
It creates confusion, but the current line-up is extensive.
We are in good times.

Tom,
Very clear, fair and not misleading.
I think excellent.

You’ve reminded me of how Airfix sometimes deal with the German nomenclature for the sake of their perceived market, ie children. Their 1/32 Sd.kfz 250 is “Rommel’s Half-Track” - and the current release now only has that on the box top, while the original box followed it with “Sd.kfz 250/3” in equally sized letters.
For their 1/76 StuG III they have gone the other way. While it used to be labelled “German Assault Gun”, it then went all technical when it became “75mm Assault Gun”. The current boxing has gone (almost) totally native with “Sturmgeschutz III Ausf. G”.
Then there is the “Armoured Car 234” that became “German Armoured Car”, and is now “Sd.kfz 234 Armoured Car”.
Their “German Reconnaissance Set” has undergone a similar journey, even picking up an umlaut on Kubelwagen.

When I was still into 1/285 wargaming, the group I was with pronounced it “Skid Fitz”. We thought we were sooo cool :<)

SPW or schutzen panzerwagen is the general nomenclature. Then we have the weight classification : light/medium/heavy, then the specialty.
Basically they have :

*Kübelsitzwagen (bucket-seat cars) , and its amphibious models (Schwimmwagen and Trippel)

thank you , Good additional topic.
I would show you the same thing.
This box-art says in english “Jagdpanther” , but the Japanese text actually says “hunting panzer Rommel”.
Old Tamiya has educated the children of that time about the serious false. 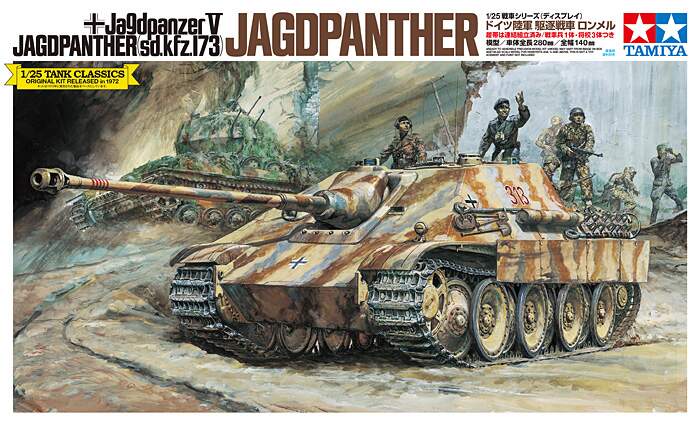