Looking to break my allied run of models and purchase an axis tank. I really like the panzer 4 long barrel but wondering the opinion’s of the more knowledgeable. Border Models seem to have a good range but what are people’s opinions fit wise and accuracy. Any help is greatly appreciated.

Have a look at some build reviews and comparison reviews on the Net Nick and determine from that which way you may want to go.

Also depends on the cost and availability at the moment too. Not much hitting our shores at present.

Check out Andy’s Hobby Headquarters. He has several video builds of Panzer IV from several companies including Border Models. It is a terrific way to see the kits being built, any fit issues, and how they build up. It is a great site!

Rye Field models have some really nice Panzer IV kits. I really like the Border Model kits, I have 3 of them… Dragon makes a ton of Panzer IV kits. They have been the gold standard for a long time. Even the “new” Tamiya Panzer IV Ausf. F looks like a nice kit. You certainly have many choices of variants and price ranges. It’s really a great time to be a modeler.

Best Pz IV? Hard to say probably depends on what’s important to you the modeler. The Pz IV is my pet favorite model subject matter. Here’s my .02 worth of opinion.

The new Mini-Art Pz IV J with interior is probably worth a very close look as a best candidate for accuracy & detail. I’ve not built one and won’t as 1,500+ part kits aren’t my cup of tea. I get very bored around ~600 part count level.
Mini-Art Pz IV J w/ interior

I think Mini Art is offering a Pz IV J artillery observation version too with out the interior.

While Dragon’s Pz IV’s have nice detail for their time period they have been surpassed in that area by today’s new kits. The Dragon Pz IV J kits are very nice. Worst thing IMO is Dragon instructions based on my experience building.

Border Model first release was a Pz IV nicknamed “Dragonslayer” by the company. I’ve not built a Border kit yet. Looking at the kits and reviews, Border seems to have accomplished their mission. Fit may not be quite Tamiya quality but appears to be good from what I’ve read & saw on youtube. Lot of focus on simplifying the high part counts of Dragon kits while keeping detail. Engineering looks impressive and well planes on first inspection.

Likewise the Rayfield Pz IV’s seem pretty good for the cost. Probably the best state of the art value. Fit good but not Tamiya or later day Dragon quality.

Tamiya Pz IV H & J kits from the mid 1990’s. State of the art fit & instructions. Nice enjoyable kits to build. Detail was lacking in the mid 1990’s and is weak by today’s standards. That easy to fix with some basic modeling work and aftermarket parts. Many weld seams are missing, lots of bolt details missed, many flat screw head details missed etc. Terrible thick side skirts. New version of the rubber band tracks which most will want to replace.

The best fun to build, best engineered, very good detailed kit with nice instructions in my opinion is the new short gun Tamiya Pz IV F. With a gun barrel replacement it could become a long gun F2 or early G without much hassle.

I have a “Hold” with my LHS for the new Tamiya PzKpfw IV F as soon as theirs arrives. I am really looking forward to it. Does anyone have opinions regarding the ReTooled PzKpfw IVs by Italeri? They are quite nice.

My .02 worth… Our club ,SWAMPS, just voted for Tamiya’s new PzIV as our group build. It’s pretty much a new kit with the road wheels and hull tub the only carry over from the 90’s kit. But that is a short barrel PzIV. I’ve got 2 Border PzIV’s and they look nice in the box. I did build their Leopard2 and it gets my vote for best kit of 2020. That’s why I got the IV’s. If you can find one of Dragon’s “39 to 45” series PzIV’s they are GREAT ! I built a “C” during the shut down. The usual confusing instructions but good fit. Also, if you can find a Tristar IV they’re good too. I think Hobby Boss bought the molds when Tristar went belly up.
What ever you select have fun !

After a bit of research and Youtube reviews I bought myself the Border Models panzer iv, kit #BT-004.

My main decision behind this was the molding is really well done and I want to build a DAK vehicle. Upon opening, it looks like a great kit.

Hope everyone had a safe and Merry xmas!

Thanks for the review breakdown.

The TriStar kits rock on details for early Pz IV’s as one would expect with Tom Jentz as a consultant. Parts clean up is very critical or something won’t line up correctly. Suspension is very nice but very fiddly.

Craig Ellis of 8wheels-good, has over a dozen nice reference books on the Pz IV. Recently picked up several. His focus is the difference in Pz IV’’ between the different manufacturers. There’s a small section on models and DML/Dragon kits are well represented for the Ausf G & Ausf H models. I’ve not see the books on the other Ausfs. 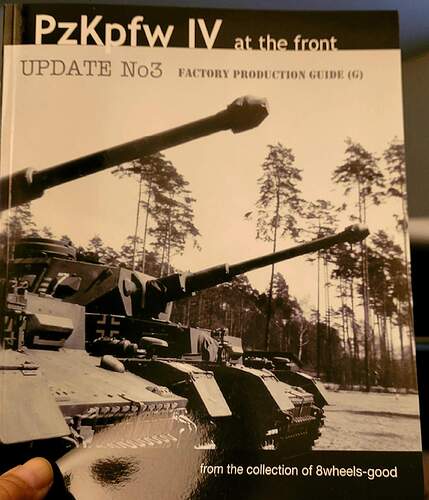 Interior or no interior?

Border Model first release was a Pz IV nicknamed “Dragonslayer” by the company. I’ve not built a Border kit yet. Looking at the kits and reviews, Border seems to have accomplished their mission. Fit may not be quite Tamiya quality but appears to be good from what I’ve read & saw on youtube. Lot of focus on simplifying the high part counts of Dragon kits while keeping detail. Engineering looks impressive and well planes on first inspection.

I am not an expert on Panzer IVs and am really just a beginner with 1/35 scale modeling. I just wanted to comment on the Border Panzer IV. I bought and have almost finished building their initial release the mid/late Panzer IV G. It is an easy build and the fit is almost perfect. I would say it is perfect but there was one piece that didn’t quite line up. It felt like building a Tamiya kit.

@phil2015, Phil that’s great to know! I’ve been eyeing the mid/late G and will order one. You’ve sold me on one

I’ve really enjoyed building it. I bought the vorpanzer version as a second kit because it has everything in it to build an early/mid G but it comes with the earlier version of the cupola (with the split hatch). At least i think that’s correct.

Might be worth waiting for reviews on the new Miniart kits if their M3 is anything to go by.

I just took delivery of two RFM kits. Very impressed with just a short look thru. Kinda get the feeling that they may have kind of a narrow window for a build, but we’ll see. The Tristar/Hobby Boss kits are still the bench mark for an early hull. I really like the Dragon kits, but not as much as the Tristar. The advantage with Dragon is they’ve built most every version used.
gary

Appears Border has several fit issues with the kit in link. Also deviation from instructions maybe best in several places for better fit.