When You're at a Christmas Party 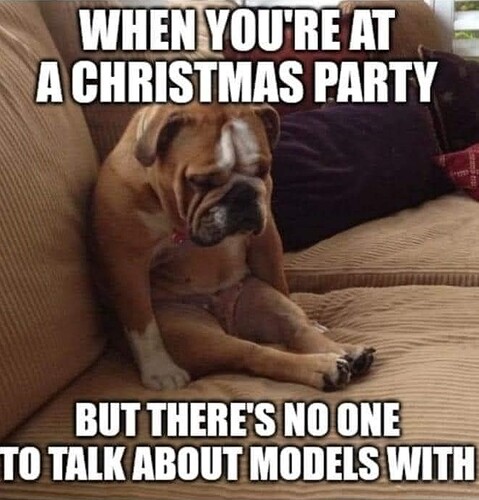 Thanks for the laugh!

this is the reason i avoid office related functions

Thanks for the laugh!

You’re welcome. I thought it was funny.

At a party:
“So, what do you do for fun?”
“I build scale models.”
Awkward silence.

Or the always popular “I’m a model railroader.”

Reply: “Oh, you play with toy trains. Do you wear a train hat?”

The reply from the vice president at Apple apparently didn’t go over well. Glad I didn’t use it. But then I don’t play golf.

You could always start with:
“I’m a compulsive wanker”
and when they look shocked follow up with
“Just kidding, I build scale model tanks”

The two are not mutually exclusive… so I’ve heard.

@18bravo ok what was his reply as i have missed it…if it’s rude PM me the answer please.

I remember a job application I filled in years ago, there were two questions that I had fun with:

Q: what interests do you have?

Q: what do your interests say about you?

My answer: I’m a bit of a wanker

strangely I never got the job, can’t think why.

Best be careful doing that these days with Cancel Culture, you might get a knock on the door from the Wanker Police! LOL

I race cars, play golf, and fondle big-breasted women. But I take weekends and major holidays off.

Personally the only thing I find offensive about it is playing golf.

Is that a quote from “Arthur”?

The guy who lost his job at Apple was quoting the movie. Apparently they don’t play.

I have my own Christmas party story. Two years ago at our dining out, I met a woman in the hotel lobby before the dinner. I asked why she was there and she said she was a guest of the commander, who was/is a smoking hot colonel.
So as we’re going through the reception line I presented her to the colonel, who raised her eyebrows and said, “And how do you know Sergeant Skipper?” to which she replied, “I don’t. But I’m taking him home later and I’ll find out everything I need to know about him.”

This is the same colonel who sat behind me at a Korea United exercise and watched me accidentally try to put my ID card into the slot where the CD slides out rather than the slot for the ID card. She said, “Sergeant Skipper, are you trying to put it in the wrong hole again?” Without missing a beat I said it’s never wrong if she likes it.