To this day, I don’t see why the US Army and USMC are so enamored with the .50cal M2HB and 40mm MK-19 automatic grenade launcher as primary vehicle weapons, especially when peer nation armor has increased in protection.

While very capable weapons, one would think that the US Army would have developed a more potent weapon in the 14.5mm or 20mm caliber and just under 25mm. Even Russian GAZ and Tiger trucks have 30mm cannons in RWS armored turrets.

Whatever happened to the M2HB replacement XM806 besides it being canceled in 2012?

In order to split it out as its own topic. The system is a little clunky at times.

The 40 mm is primarily for anti personal and for that it works well.
It was not designed for anti vehicle.
The 20 mm is not so portable. How would you mount it to a 5 ton truck The ammo is heavier/larger so less is carried. The .50 is not perfect but it is easily installed on soft skin vehicles and the ammo is packaged for that purpose. Hard skinned vehicles already mount chain guns. If you were thinking about weapons for a tank retriever a 20mm might work but it is a support vehicle and you would end up losing work/storage space.

Both weapons have been in the inventory so long that vast stockpiles of ammunition (in many different loads) exist and are already on-hand. The same can be said for the weapons, themselves. They already exist in huge numbers in the inventory in all services and branches.

The most important thing, though, is that both weapons are sufficiently effective in their intended roles. Their technology is mature, and both weapons are not only effective, but they are also eminently reliable, “soldier-proof,” and easy to operate.

In short, unless there’s an evolution in the defensive-protective nature of the band of targets these weapons are intended to be used against, there’s little need to develop and field a new generation of weapons to defeat those same targets. An incremental improvement in capability that doesn’t “kill” the target any “deader” or more precisely than the legacy weapon can already kill it would be a waste of resources.

without a second thought; everybody I ever knew that liked to shoot the fifty died on the fifty. On top a tank or an ACAV yes, but your not just gonna grab that 120lb. chunk of iron an run with it. The neighbors learned the art of flanking the fifty along with keeping it occupied out front. Never ends well. Then there is the ammo issue. It’s heavy! Never seem to have enough of it, and then you gotta get some more. That’s when they get you. The barrels will be toast too soon in a heavy engagement. Yet as negative as I was, it has it uses. Great for ripping a chopper to pieces while rolling thru a valley getting ready to set down. The range is way over rated for man on man crap. Most engagements that mean anything are close enough to check his dental work (200 yards and way less). 90% of all KIA’s happen at less than 100 yards on the battlefield (small arms only). Yet 85% of all KIA’s are from arty of one kind or another. Ten percent is via air strike, and you all can guess the rest (note: it’s still less than five percent). At 100 yards the fifty is way over kill, and even the 7.62 ball is getting there.

I well remember seeing some of my neighbors chained up to 51 caliber machine guns. Thus forcing them to stay on the job instead of taking a fast hike. Even he wasn’t that dumb! The 40mm machine gun (I guess we’d call it one) was a new kid on the block when I wore green. I remember seeing a couple on tracks, and maybe on a gun ship. Always thought they were kinda neat, but never saw anyone shoot them. Think the first use of them was on Marine AMTRACS. Of course we always felt the grenade launcher under an M16 was kinda funny, but guess you learned to shoot them OK. Yet I’ve been around a couple guys that could almost shoot sparrows with the M79! I never was real good with it, but at forty feet with a can round you belong to me.

Tony Herbert once stated how useless a shot gun was in combat. As much as I respect that man, I gotta disagree with him. Perhaps it’s what your comfortable with
gary

you and I both know what the master of the battlefield is! The beehive round. A 152mm round will virtually clear out a football field. Still not everybody gets one. The fifty as great as it is also can be a pain when in combat. Change out the barrel with bullets in the air! Lots of head space issues when in a hurry. Barrel life in the panic zone is nothing to brag about. On the otherhand you can engage the other guy comfortably at six hundred yards. (forget that 2000 yard B.S.) Yet a guy with his stuff wound tight can do the same thing with an M60 or M240 (?) An M60 on a tripod is a serious weapon. Yet the tripod is too tall like the M2 tripod.

I once saw a guy with a fifty cal slug in his gut crawl a mile and a half only to die a couple minutes later. Yes he was dead in the end, but? I’ve seen the samething with 7.62 ball, but several times over. Still if the bullet didn’t get him; he bled out. That’s why we were always taught the double and even triple tap. Nothing is perfect for sure.
gary

without a second thought; everybody I ever knew that liked to shoot the fifty died on the fifty. On top a tank or an ACAV yes, but your not just gonna grab that 120lb. chunk of iron an run with it.

Better sure it was Korea after a little bit the Marines removed the .50 cal from the top of turret, to many TC’s where getting WIA/KIA trying to use the gun and they where running out of experienced TC’s.

Oh come on now Top… the quad .50 is a great anti personnel weapon….

Humph…
Now THIS is an anti-personal weapon… 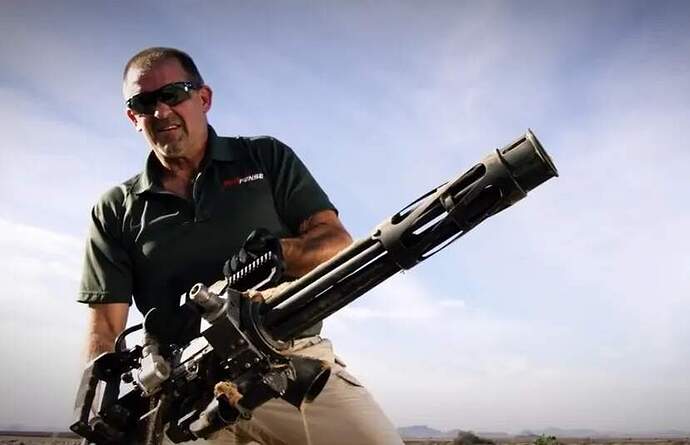 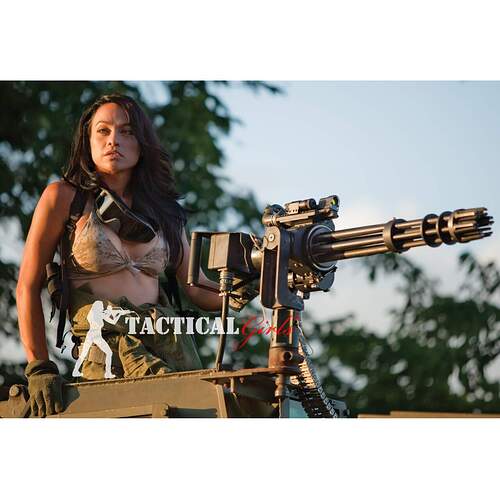 This all reminds me that the 30mm RARDEN cannon, employed in the British CVR(T) AFV series, was originally designed as a towed weapon for the British Airborne; I vaguely recall an artist’s impression showing something on balloon-type tyres, but I might be confusing that with BEESWING (Swingfire missile on a towed/vehicle mount).

I appreciate this doesn’t add much to the discussion but it might show that the Brits were considering how to deal with some battlefield threats.

most correct. The one serious advantage to the fifty is range, and most fire fights, probes, etc are well under the 200 yard mark. Think 75 yards and less! Yet the guy on a turret with half his torso standing out and proud might as well have a bullseye on him.

I think there’s a place for the fifty cal, but also thing it’s time for a 200% redesign (even the round itself). The case design is a typical John Browning screw up like he did with the 30 caliber. The generic 7.62 x 51 case is as near a perfect design as it gets
gary

I thought it was pretty neat till I saw the flaws in the design. The one very major issue is lack of negative elevation. You just can’t shoot real close with them, but a thousand yards is another story. Add to this that they are a serious maintenance hog!

I had one parked next door up on West while doing an OP with the 101st. West was ontop a mountain with fairly deep valleys all around. Those guys would shoot up the valleys every night just before dusk, and then spend four or five hours in the morning working on it! It was so bad that they quit shooting all for guns and went to two! The section chief was a kid I went to high school with, and he flatly said he hated it. Something was broken or getting broken all the time. I was near him 29 days and saw the change three generator packs alone. Yet I felt fairly secure, but with a bad feeling in my gut. They simply came up under it and threw a dozen grenades at it (no real damage), and they couldn’t shoot back at them!

I honestly think the same basic concept with a 30 caliber mini gun and increased depression was a far better answer. Still they were not as bad as the clowns shooting the 106mm recoilless thru the valleys. Lots of noise and not much else.
gary

Love me some minigun but… it is an ammo hog and the size of the ammo bin, the feed shoots, power requirements etc…
I think for balance the M-240 was good. Easy to use, rate of fire is usable, ammo requirements are supportable, maintenance is low, the weapon was portable and the weapon was reliable.

I like the way they did the stock! Looks shorter than the 60. Ever shoot one off hand? I was pretty good with the sixty shooting off hand once I learned to master the barrel climb. The feed ramp looks much better than the sixty, but don’t think I’d like the fore stock. Is the bi-pod adjustable? I shot the sixty most of the time with the bi-pod folded up to get it lower to the ground
gary 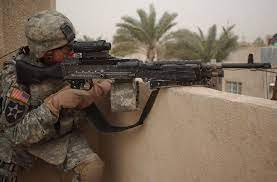 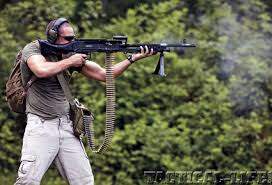 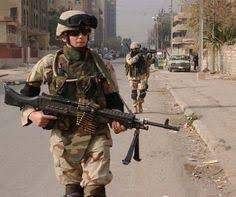 There are adjustable bi-pods but most are not.

In the middle picture, look at the way his eye lines up with the barrel and receiver top. Most folks don’t realize that after one hard belt; the sights are useless due to the heat waves. Yet on that gun your using the entire barrel as a sight. I really like that concept. I like the idea of using a bag to hold the rounds (or is that a magazine?) The setup in the middle photo will end up making a lot of noise, and hang up on everything you pass by. I’ve seen a sixty with a Starlight scope mounted a few times, but was good for one short hard burst. Then you were blind (guess new stuff is better)

I always carried the sixty with a 30 round belt in it. Made way too much noise, but it was all I had. Some guys used a ten or fifteen round belt, but just didn’t seem right to me. The bi-pod on the sixty makes a lot of noise, and I tied it up in the folded position, and shot off the ground. If you ever saw me stepping off a slick with the sixty you’d see a sand bag wrapped around the butt stock, and another around the fore stock. I’d lay the bigger one on the ground and shoot off it. The flash suppressor kicks up a lot of dust, and needed a redesign. The neighbors learned to pick up on the dust being blown up.

Lastly: How easy is the gas cylinder to get to? Never liked the setup used on the sixty, but also never had a failure. The RPD to me was the best system all around. Never cleaned one, but looks easy.
gary 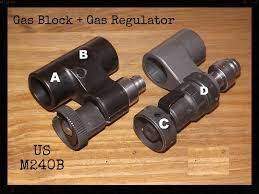 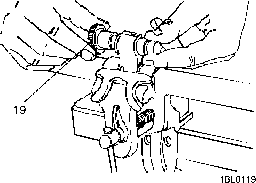 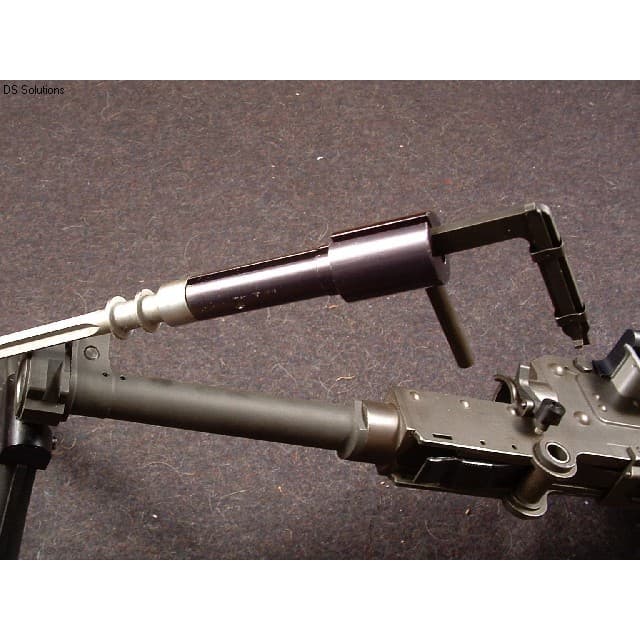