The Western Maryland Railway (WM) began as an agricultural road in 1852 serving the local Baltimore,MD market. When it lost it’s independence in 1972, by being absorbed into the Chessie System, it was a fast freight line operating in Maryland, Pennsylvania and West Virginia moving coal from the Appalachians, agricultural and manufactured goods from the mid-west, to the Port of Baltimore and the Atlantic seaboard.

The vast majority of the coal came from the mines and branch lines in Elkins, WV at the end of the 111 mile Elkins Subdivision. The trip from Elkins to the mainline at Cumberland, MD required traversing some of the most restrictive trackage on the railroad, the 10 miles of 3.05% uncompensated grade through the Black Water Canyon with curves as tight as 20 degrees. This curvature limited steam locomotives to Consolidations (2-8-0) and WM rostered some of the largest built. The H-9 and H-9a classes were built by Baldwin Locomotive Works in 1921and 1923, weighed 309,910 lbs and developed 71,500 lbs of tractive effort, more than many larger locomotives of their time. The Alco RS-3’s and EMD F-7’s that replaced steam in 1953 developed 62,500 and 61,500 lbs. of tractive effort respectively.

Moving a 4000 ton coal train, 70 cars plus caboose, from Elkins to Cumberland required 2 H-9’s on the head end leaving the yard. At Montrose, 12 miles down the line, 2 additional H-9’s were added as rear end pushers ahead of the caboose. This was to boast the train up a 2.08% grade as the train crossed the first ridge of the Alleghanies. 25 miles later, at Hendrix, 3 additional H-9’s were cut in mid-train for the assault on Black Fork Canyon. The top of the grade at Thomas saw the removal of the mid-train helpers with the remainder of the train continuing on to Fairfax at the summit of the eastern continental divide. Here the rear 2 locomotives were removed as the train now crossed from the Mississippi watershed to the Potomac watershed and it was all down hill 75 miles to Knobmount Yard in Ridgeley/Cumberland. There the 2 remaining locomotives would be serviced, turned and with new crews couple on to a train of empty hoppers for the trip back to Elkins too start the cycle over again.

In 1975 Pacific Fast Mail (PFM) of Edmonds, WA imported a HO scale brass model of the WM H-9. 750 pieces were built by Samhongsa of Korea. They were an evolutionary model being the first to have all axles individually sprung. The models also came with a can motor which being smaller then the old open frame Pittman style allowed for a boiler backhead that was detailed with individual castings.
Here then is a H-9 as imported: 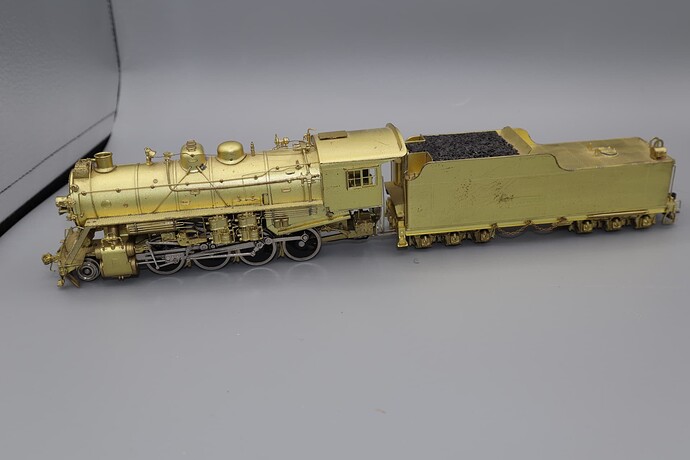 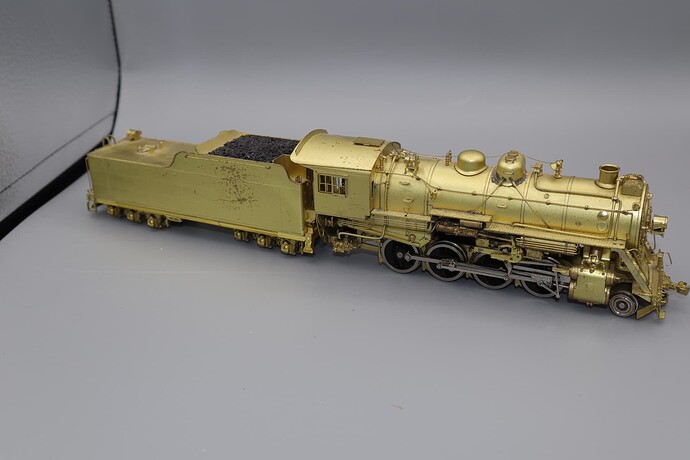 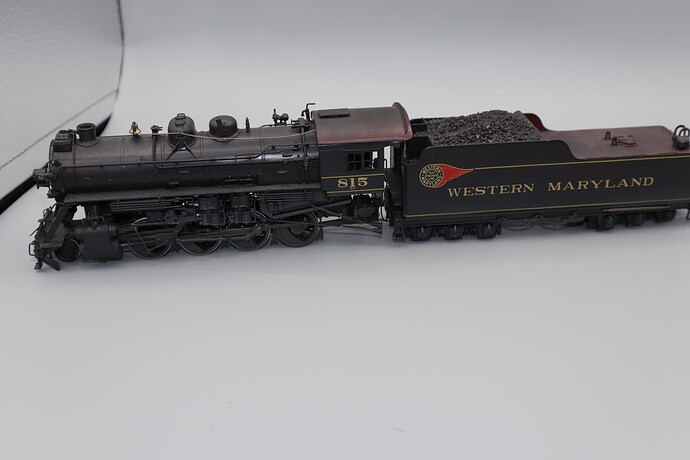 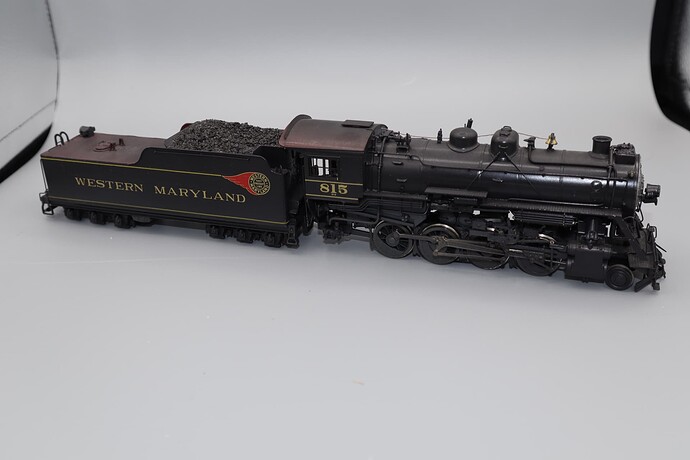 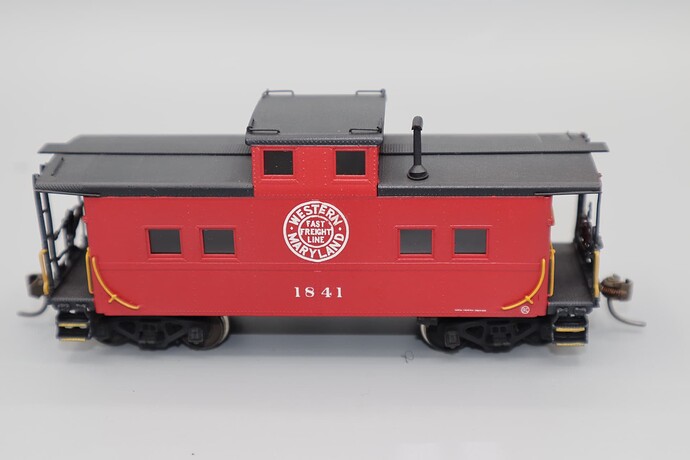 Tim, your H-9 ans caboose are fantastic. I don’t know much about Wild Mary but I know there’s that curve that photographers love that where you can usually see 4-6 consolidations hauling a coal train, and their logo has always been a favorite of mine. How long have you had the brass engine? How did you paint it?

I’ve always enjoyed the look of their locomotives, very well-balanced aesthetically. Did not have that fat Wootten firebox, or the compressed cabs of the later Pennsy steam.

I picked up the locomotives sometime in the mid-80’s to early 90’s. There was an authorized dealer and repair station at one of the shops here in Seattle. Ron sold quite a few of the H-9’s locally since they were a nice looking loco, had good operating characteristics and could be run on a small pike. Consequently they came up in the second hand market and since this is not a Western Maryland stronghold the prices were quite reasonable.

The model was stripped and etched prior to painting. I used Scalecoat Loco Black as the base color and Boxcar Red for the roof and tender deck. The smoke box front is a custom mix of Floquil colors. The weathering is a combination of various Floquil custom mixes as well as some straight from the bottle. Final weathering was done w/chalks while the spray painted weathering was still tacky. Decals are from a Champ Blue Ribbon set.

I agree about the aesthetics of WM power. Wish I could afford some of their other classes but such is not the case.

I found my Bowser decapod freelanced for my railroad. I’ll dig it out and post some shots. Probability until next week, though.

Been out of sight/mind for too long. How do you etch it? Vinegar?

At the point in time I did that unit I was using brake fluid to strip the factory finish off. Then I would do a 5-8 second dip in photographic tray cleaner, which is a very strong acid, to get a good clean surface for paint. I have since converted to a blast cabinet using 180 minus garnet or 200 minus aluminum oxide as a blast medium.