I used to post regulary on the old sites but lately I have been more interested in building kits than scrolling the forum. Current status for 2022 to follow:

First out was the Airfix 1/72 Spitfire MK 1 built straight from the box. A nice little kit with very little issues. 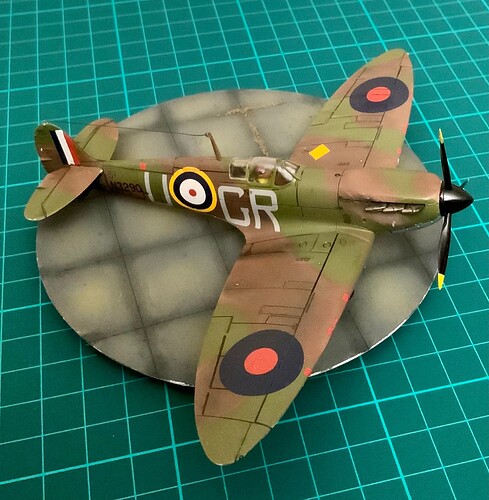 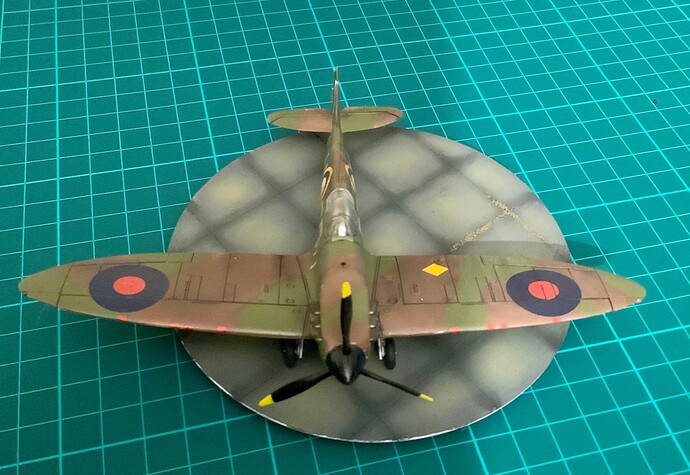 I had not built a WW II plane for years, but it felt so good that the next one was the Airfix 1/72 Hurricane MK 1. Both the Spit and the Hurricane was painted with Ammo Mig colors. 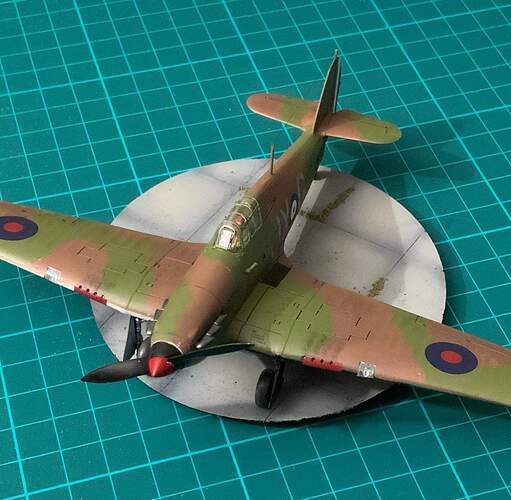 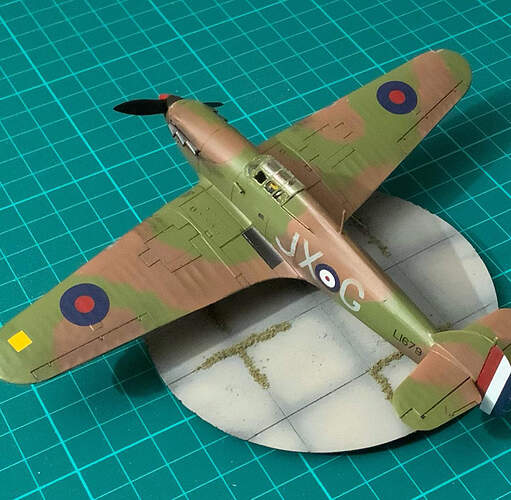 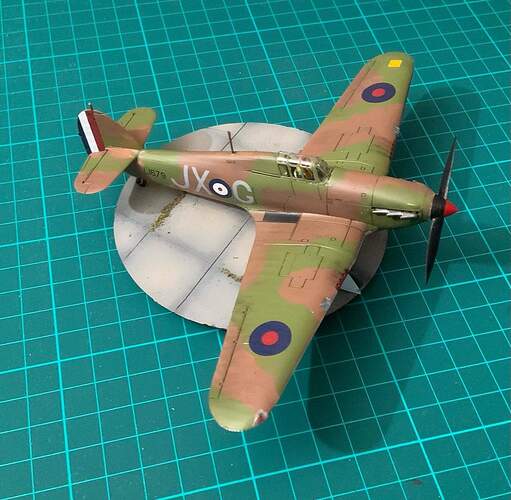 I was suddenly on a WW II roll (strange for a guy who usually builds modern armor…) so I built the 1/72 Airfix P-51D Mustang. An enjoyable little kit. 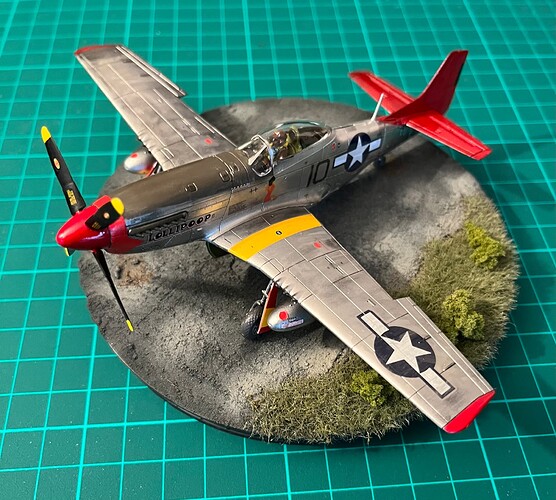 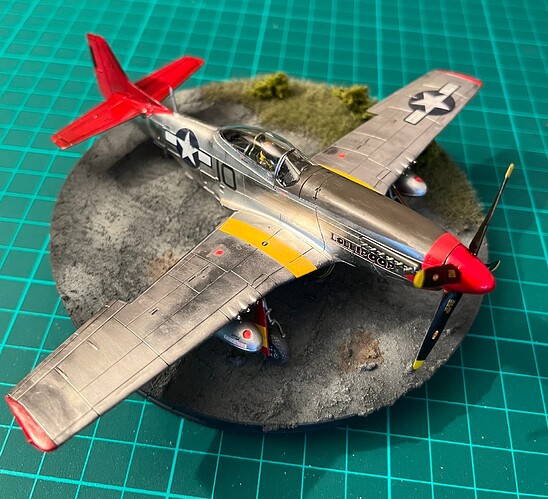 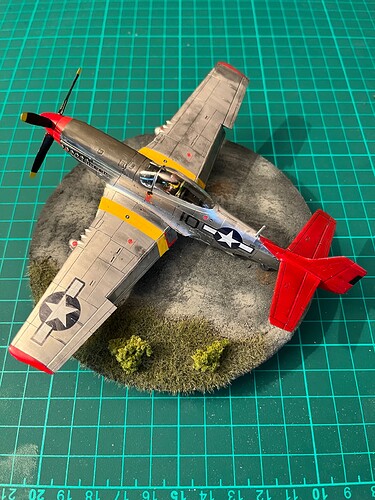 In between the Mustang and Hurricane I finished a small Humvee vignett which I will post over at Armorama.

Then I needed to make something modern. My favourit plane is arguably the F-15E. I built the Academy 1/72 F-15E in D-Day remembrance markings and it was an enjoyable kit. I changed the exhaust nozzels for Aires aftermarked ones. 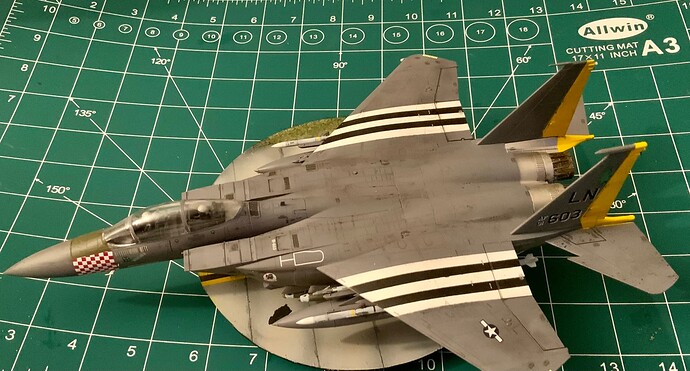 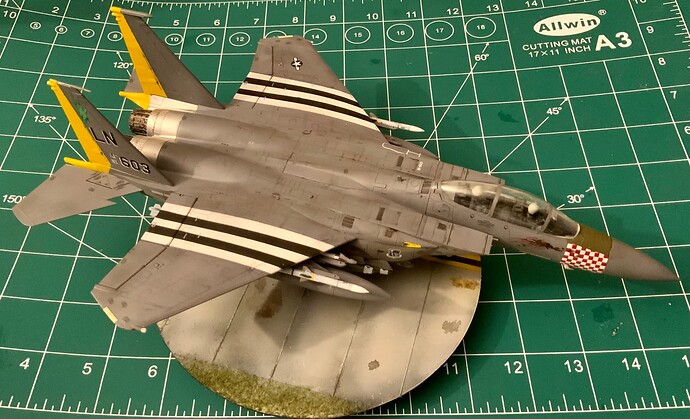 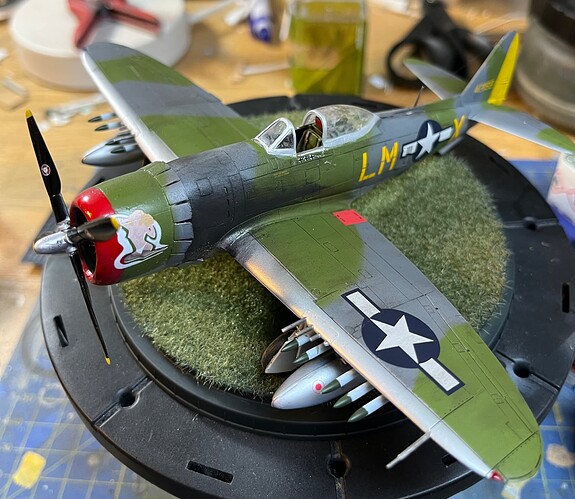 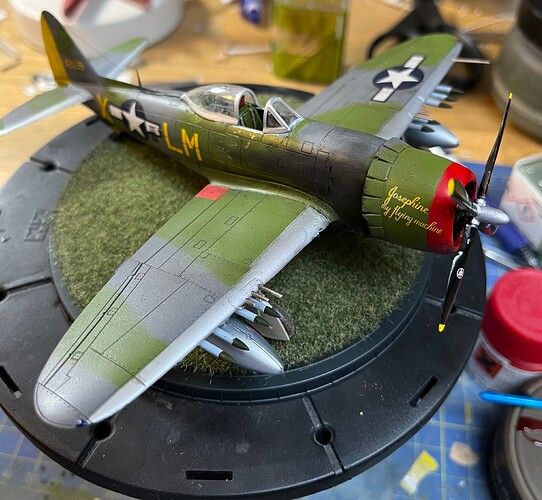 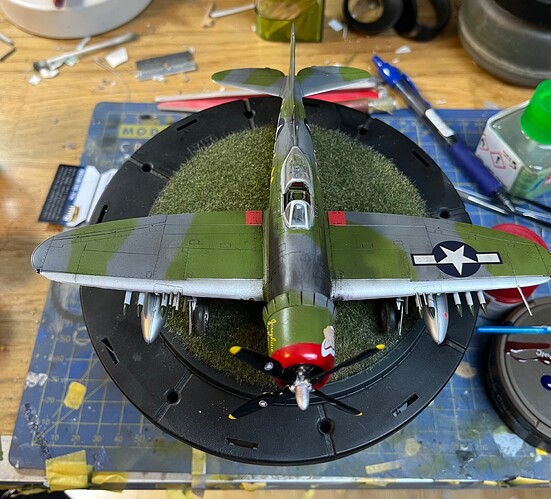 After the Thunderbolt it was time for a Spitfire again. A South African 1/72 scale Airfix Spitfire MK Vc. For a new tooled kit the gap between the wings and fuselage was a disapointment. It is easily fixed with some thin strips of styrene, but still a disapointment. 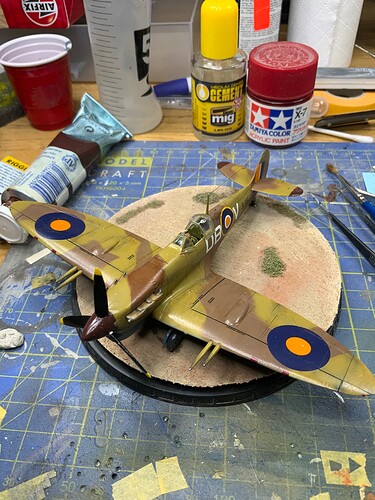 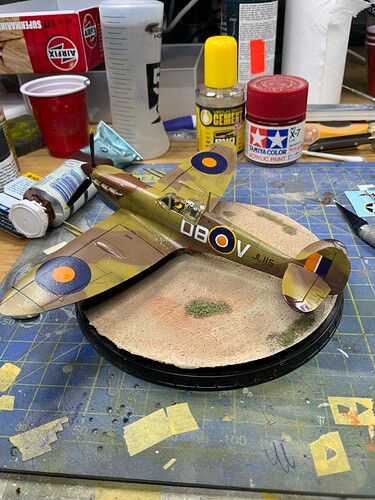 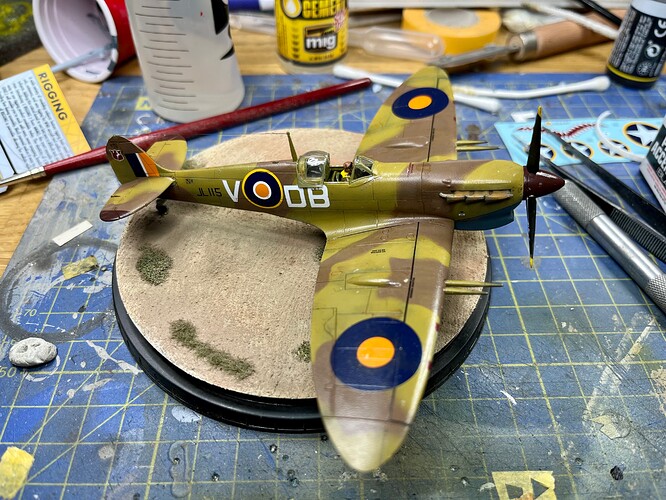 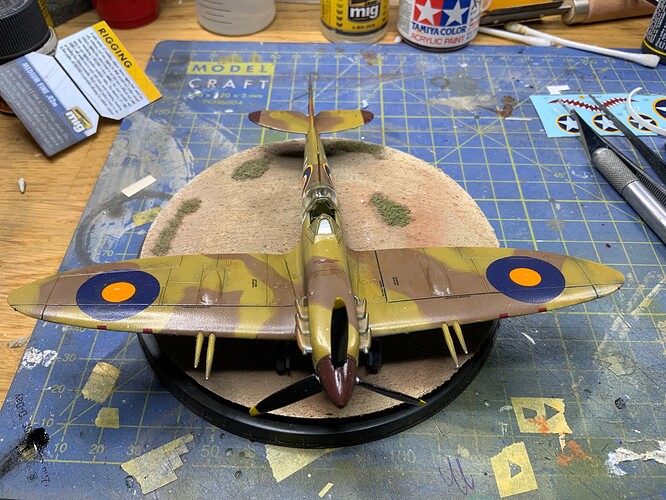 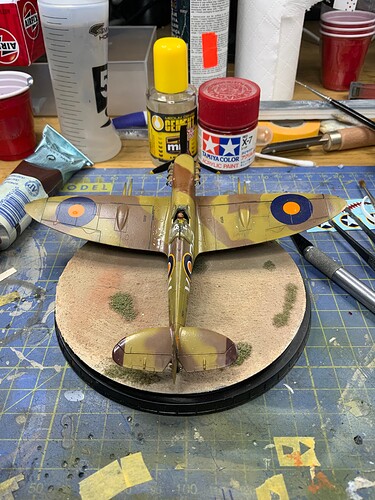 During the last weeks I have actually finished three models. One is a M1A1 vignette which will be over at Armorama. I also built Tamiyas excellent 1/72 scale F-16CJ. This has been the best kit I have built in a long time. Only thing missing is a more detailed pilots seat. 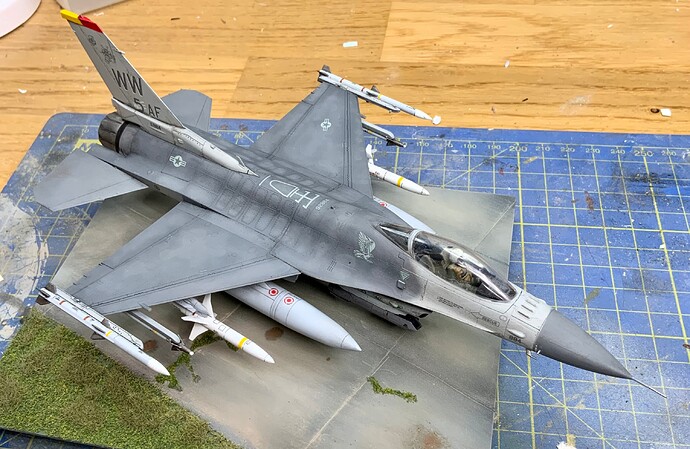 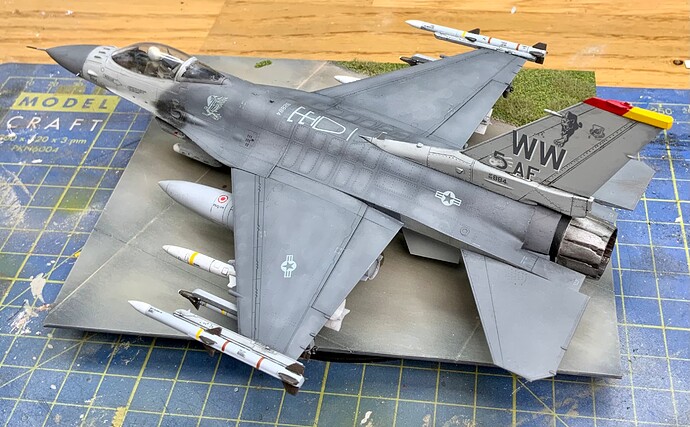 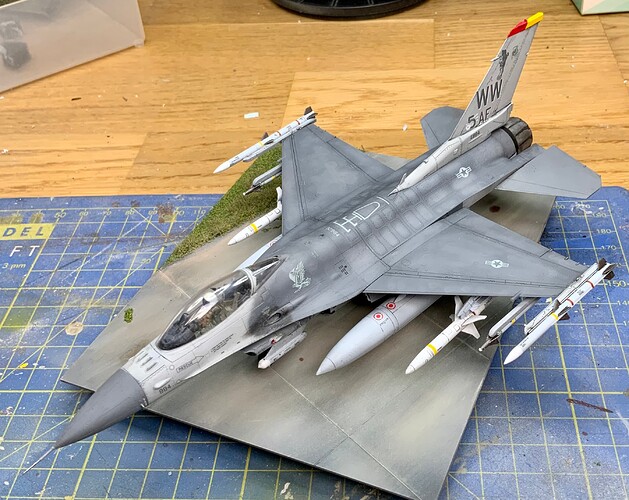 Last one so far is a 1/72 Tamiya F-84G Thunderjet. A very nice little kit, but the aftermarked decals I used for a Norwegian model sucked big time. 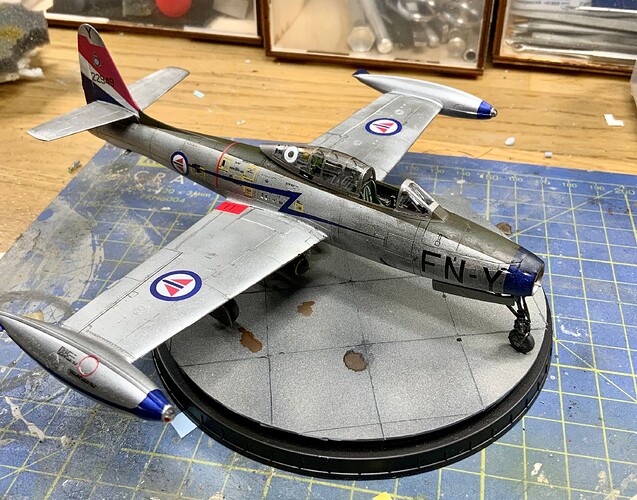 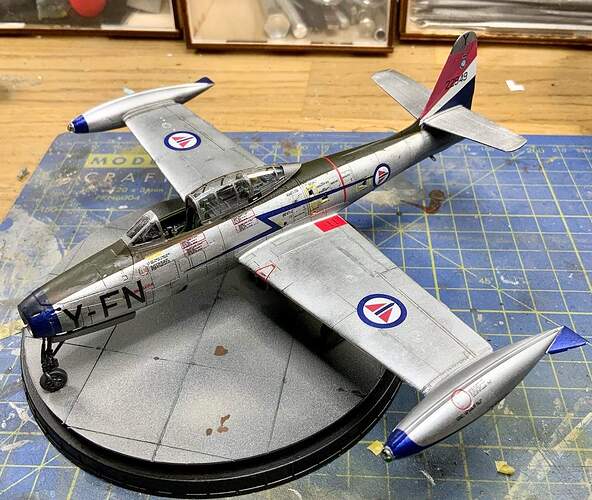 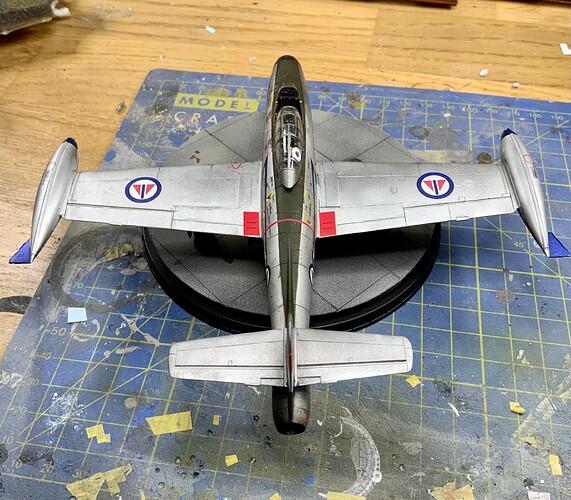 So that is the current status. Currently I have a pair of F-18s on the bench. I guess my next update will be in December…

Some nice detailed and clean builds there. Really like the F15. One of my favourites. I never knew some Hurricanes only had 2 blades on the prop…

So a very early Mk then ?

Fabric covered wing too. Strange Airfix would do this version rather than the slightly later and more common metal wing Mk.1, but it was a welcome addition to the Hurricane line up.

Erik, brilliant work on those kits. The F-84 looks really good in the Norwegian colours.

Thank you. The Norwegian decals was a pain. Very brittle and transparent. If I should do it again I would have painted most of them.

What brand were they?
They turned out quite nice despite the difficulty.

Vingtor. I have used several other sets from them and they have been great, but all the blue decals in this set reminded me of something homemade…

Wonder if it could be the ink they used?
I know a lot of people had the same problems with the dayglow striping in Airfix’s Jet Provost. All the rest on the sheet worked perfectly, but those stripes were stiff and cracked when applied.
Good job I have the Xtradecal set when I get around to building my Provost!