During WW2 did Ukraine have a separate army or did they belong to only certain Russian units?

Google only wants to talk about today it seems.

Ukraine was one of the peoples republics joined together in the USSR (CCCP) and ruled
from Moscow. They would have used the same equipment as the rest of the USSR. Republics of the Soviet Union

The Republics of the Union of Soviet Socialist Republics or the Union Republics (Russian: Сою́зные Респу́блики, tr. Soyúznye Respúbliki) were ethnically based administrative units of the Union of Soviet Socialist Republics (USSR). The Soviet Union was created by the treaty between the soviet socialist republics of Belarus, Ukraine, Russia, and the Transcaucasian Federation, by which they became its constituent republics. For most of its history, the USSR was a highly centralized state despite

It’s like writing that there is a separate Texas army.
The name “Ukrainian Front” misleads you. It’s just a geographical feature. There were even several. In the photo, the third pennant is just “4 Ukrainian Front”. There were also the Belorussian Front, the Baltic Front, the Karelian Front, etc. It had nothing to do with nationality. 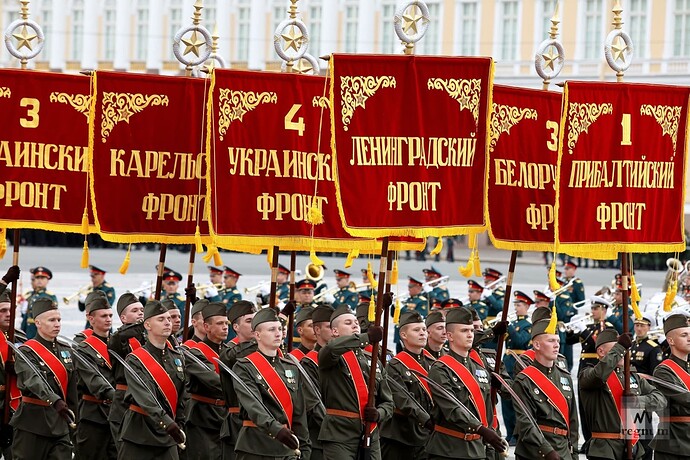 It’s like writing that there is a separate Texas army.

Technically there is but I understand your point.

Would Ukrainians and other republics have been intermixed within Russian units mostly or would same units be mostly one republic like the 19th Guards Mechanized Brigade is listed as Belarus. Just couldn’t find one for Ukraine but I don’t understand the Russian unit organization.

I think you need to think about size of population.
Just before 1940 the Ukraine SSR had close to 40 million inhabitants
(the US of A was 130 million at that time, Germany before Anschluss and other land grabs was at 69 million).
Whole regiments could be raised from one town, why mix and mingle only for the purpose of transporting people hundreds of miles. Ukraine is a big country.

Edit: See Yuri’s post below. Mixing for political or perceived security reasons overrides all other considerations …

Military units in the USSR were never formed on a national basis. On the contrary, they tried to mix it up a lot. If you lived in the south, then you will be sent to the north to serve. And the other way around. The only restriction on nationality is that for several years no Chechens were drafted into the army.
There were restrictions on the natives of the republics of Central Asia - because of their poor knowledge of the Russian language, they tried to send them to construction units.
And it is absolutely certain that no distinction was made between Russians, Ukrainians and Belarusians.

You see, you don’t even close to understand what the USSR / Russia is. On the contrary, they mixed regardless of spending and distance. I have already written about the army. It was the same with institutions, jobs, and so on.
In the USSR, you simply could not hope to serve close to home. It was a great privilege that was not given for free.

And it is absolutely certain that no distinction was made between Russians, Ukrainians and Belarusians.

Thanks for the information.