Recently finished. Got this for free at AMPS Nationals as it was missing some parts. Once I figured out there were some duplicate sprues it turned out that all the parts were there. Couple of things to be aware of. First, is that the barrel is mounted with the vane that runs down the length is off set. Unusual but I found a few photos that clearly show this. Second is that wading trunk gear mounted on the back of the turret is also off set so than when the turret is centered the gear is off set to the right. There are also some errors the most obvious being that there is a rear plate on the right side that is part of the fuel drum bracket. The bracket and the plate should extend further back so that the plate attaches to the rear of the right side fuel tank.

Anyway I built it OOB including the rubberband tracks. Colors are custom mixed Tamiya AB freehand with an Aztek 470. 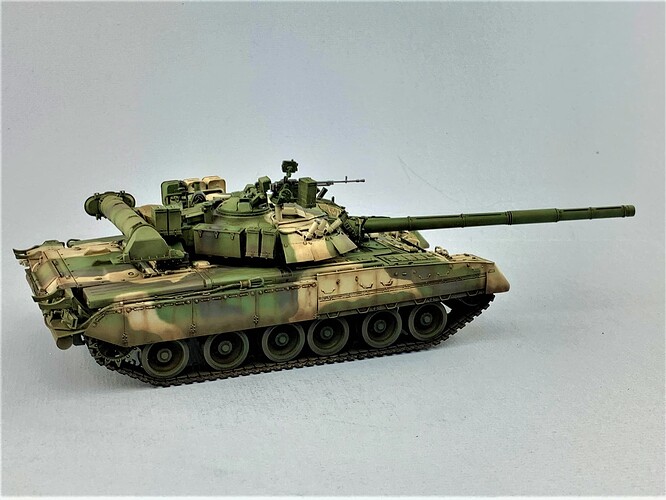 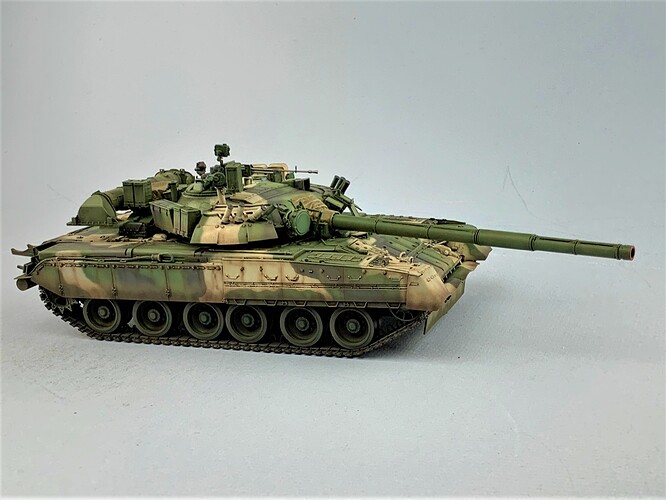 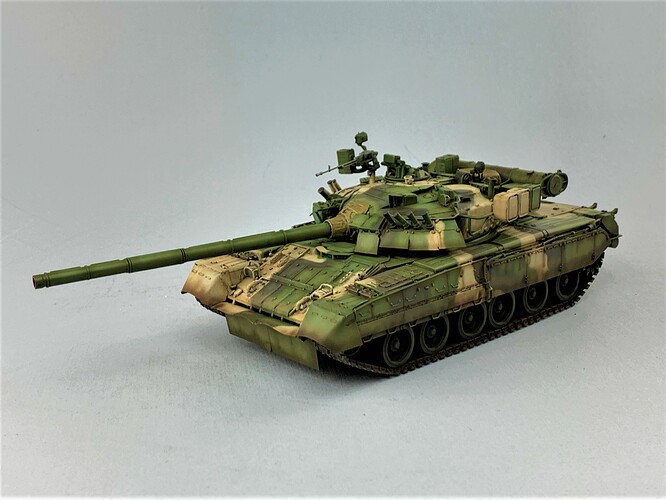 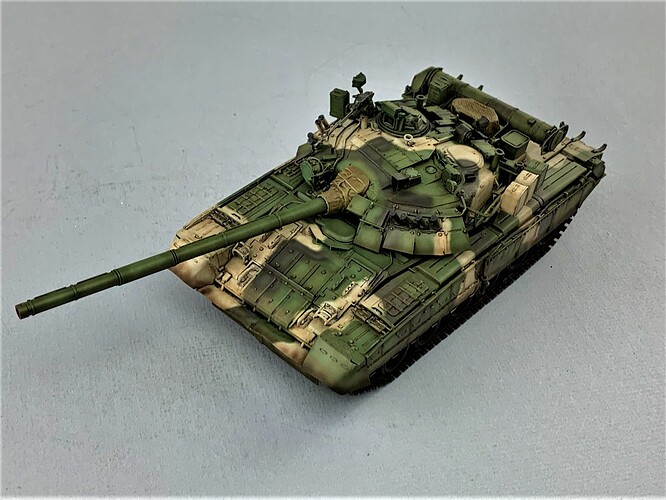 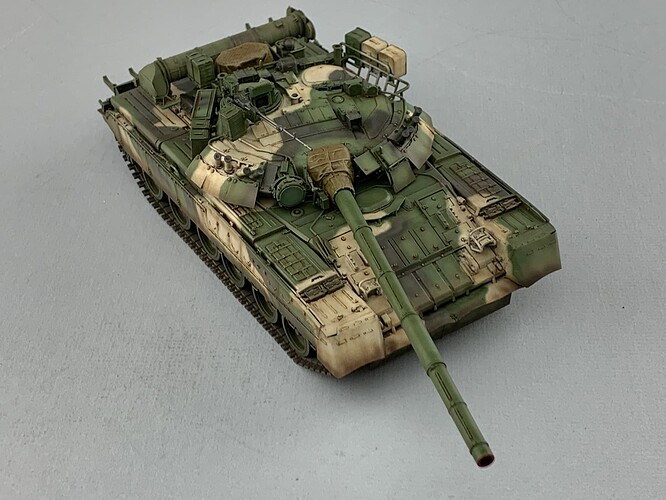 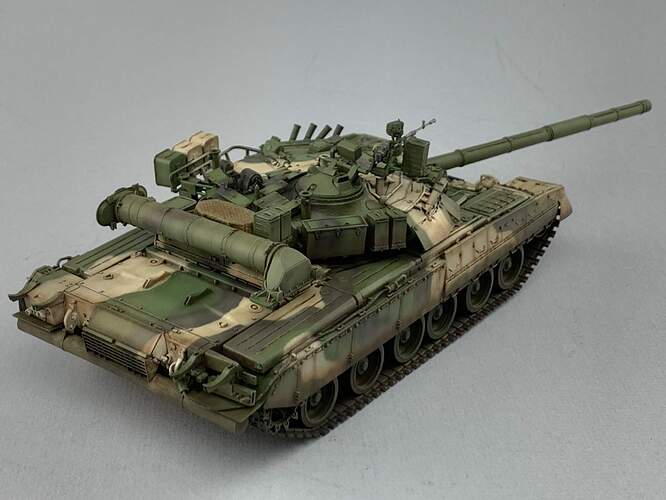 That’s a beaut- nice work. I really dig the camo and weathering.

Could it be that the wading trunk is offset so the drivers hatch is exposed when it’s in use?
Just a guess. I have the same kit/build, although nowhere, no how near as nice as yours…,

Dunno, but the turret must be turned to the right somewhat to allow the driver to exit as the hatch is centered directly underneath the mantlet/barrel. When thus turned, the wading trunk gear on the rear of the turret is also then centered over the grills.

Arch Stanton is right on, the fording trunk is offset so the driver can still exit his hatch if need be when fording. The “vane “ on the barrel is the clamp band for the thermal wrap section so technically the band of each of the 4 segments could face a different direction. 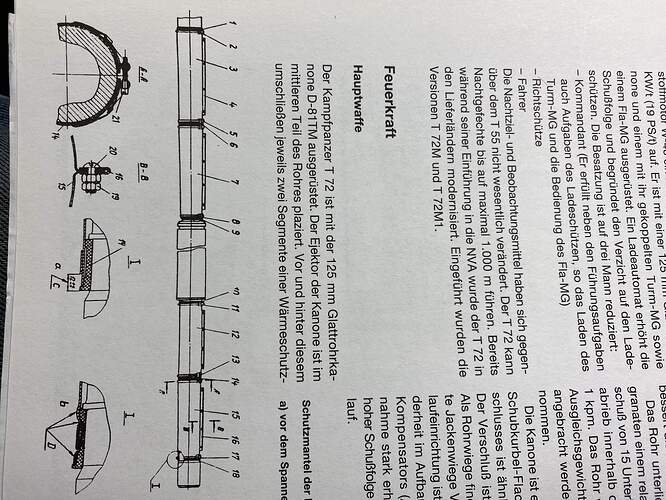 Miss read your reply. You are correct as Sean pointed out and I also explained in response. Sorry for the confusion.

I like this a lot, the cam scheme really appeals to me as does the weathering as I tend to err on the less is more side of things. I couldn’t see myself being too happy in a steel box trying to drive across the bottom of a river!!

Working on this kit right now……slowly. Good work. I like this kit too bad Xact isn’t around anymore. the Russians really engineered the turret, lots of small bits. I have the Trumpeter tracks, kind of PITA but on looking at your outcome, the rubber band may be good enough.

Beautiful job. The finish is excellent, really pops. Love the weathering too!

For a long time, this was considered to be the best T-80 kit on the market, prior to all the more recent offerings. Before this kit, there was only the dreadful “airborne box art” Dragon/DML T80 kit.

It’s been a while but I remember the photo etch for the front fenders were kind of a pain in the butt.

Again, nice results. I’m happy to see some one still has a working Aztek airbrush. I gave up on my pair of them when Testors/Model Master quit doing warranty repairs on them for free.

Yeah I used the rubberband since there are skirts and the top run won’t be seen. Good luck.

Ahh yes, I had forgotten about the front fenders PE. They were a PITA and annealing them didn’t seem to help. Guess I blocked them out.

Thanks. I like to go for a scheme that’s a bit different to what folks are used to seeing.

This really shows some serious airbrushing skill and what you can do with an older AB like the A470! I have to say, like others, that the camo tones are beautiful and you’ve kept the weathering to a level that lets you appreciate both the excellent scheme and the colors you’ve used.

Thanks John and Karl. As much as I enjoying building I really like to paint and weather. For the most part I do keep the weathering on the lighter side so as not to distract from the lines of the built and the paint job as Karl noted.

Beautiful finish. The last 2-3 pics just really show the results of the camouflage pattern you have achieved.

DV, just something I noticed and am curious about. On the front left hand of the turret, the lower 2nd plate next to the barrel is sitting below the drivers line line, so in theory would stop traverse going right ? is that lower plate flimsy and movable on the real thing and would just ride over the hatch or can they be lowered for a reason ? Just curious ? Or is it just the angle the image is taken from ??

It is indeed somewhat flimsy. Checked what few references I have and confirmed that the placement is correct. Don’t really know what it’s made of or why it is longer than the other pieces of the same material. Same stuff that’s seen on many other Russian tanks with turret add on armor. My impression is that it’s some kind of heavy rubbery material.

Cool, i was just curious as like I said, if you traverse right, its going to catch on the hatch if drivers if closed down … if its flimsy, it would ride over it …