I’ve taken on yet another 3D project requested by an Armoraman. A Yamaha dirt bike used by the US SF seen in Afghanistan: 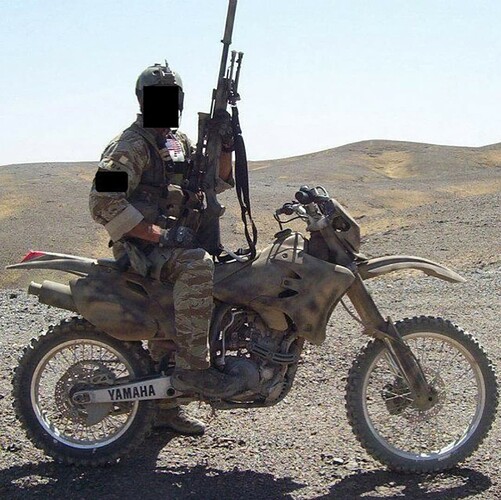 This is WIP and the following 3D design will be the starting point: 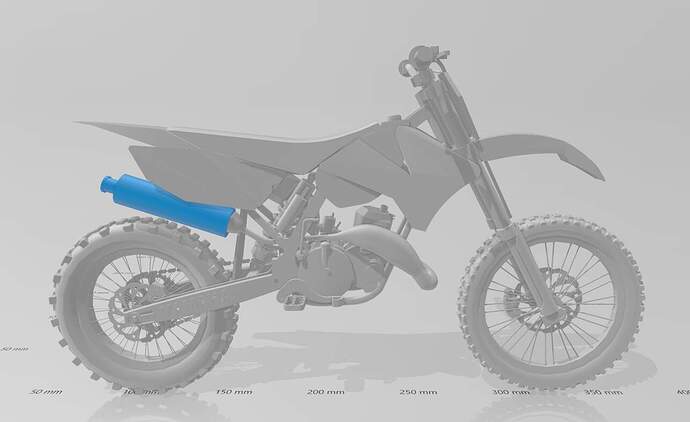 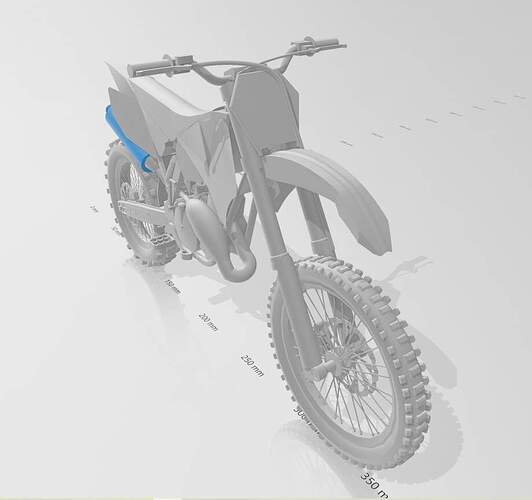 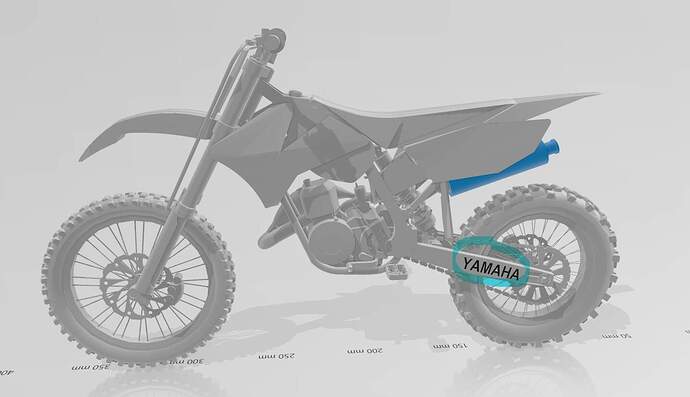 I even learned a new feature in the CAD program in which you can 3D emboss texts and shapes (see highlighted in circle).

I am thinking adding a front body cover kit, a new headlight part, add a new brake light, change the muffler, add a rear body kit, and modify the engine parts a bit. With those, it will be a very close model. Not 100% look alike but close.
Fun stuff. Hey, Gino,
I have that kit but it’s quite rudimentary and based on a much older motorcycle not the ones seen in the 2010s. Plus, that kit has been out of production for a while, so difficult to find it. Mine is going to look much better and accurate.

I have the plastic kit as well, look forward to seeing your results.

Thank you, Mike. I am going for the 4-stroke like the one in the image by modifying the 3D design. For Yamaha YZ 250, the visual differences are subtle (left one 2 stroke, right one 4 stroke) 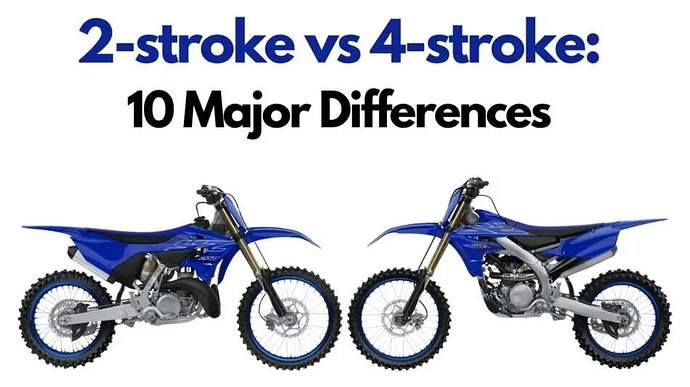 I think I can pull off the reconfig. with my CAD skills. At least, I’ll give it a try.

Thank you, Mike. I am going for the 4-stroke like the one in the image by modifying the 3D design. For Yamaha YZ 250, the visual differences are subtle (left one 2 stroke, right one 4 stroke)

It may not be the same bike, but pretty close. I have built it and it actually looks pretty good.

O, man, Mike, now you put that sound in my head, and I cannot get it out!

At the same time, if I get stuck spending too much time or get too busy with life, I may just leave it as a 2-stroke version and call it a day.

O, man, Mike, now you put that sound in my head, and I cannot get it out!

Now that I’d be interested in. Actually I have the Dragon kit and it is almost identical to the one we had in Afghanistan in '02. It even has the two ribs along the top of the front fender. The problem is the spokes. I’ve been looking at different kits to find PE replacements. I finally found one that would work but it’s been unavailable for quite some time. If you could do very fine spokes I’d certainly be interested. 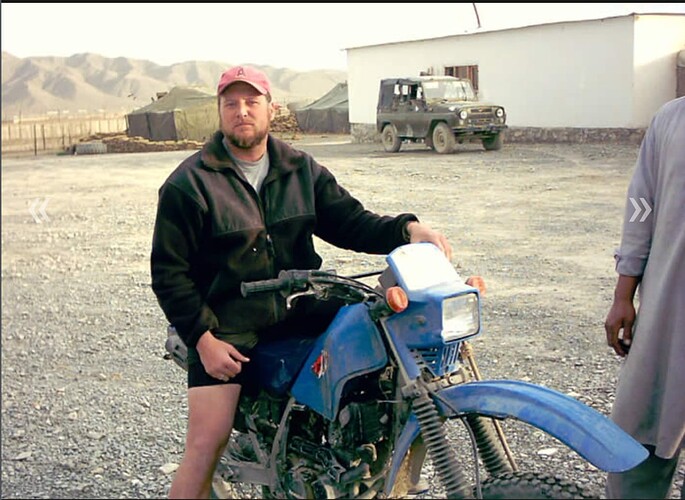 Ah, quite by accident I discovered how to do those logos too. I was doing one for an SPG engine - Detroit Diesel. I just added the image of their logo to the top of the cylinder head and extruded each letter. Works great.

Perhaps just a set of wheels with spokes as a separate item?

I built the DML dirt bike and it’s pretty bad in fit…makes it look like a toy from a gumball machine when completed.

I would be interested in a 3-D printed modern US SOF dirt bike with a flat bar gun rack over the rear fender = great idea to make one.

I’m scraping this project. A test print confirmed my doubts that the spokes are too thin to print in 1/35.
It’s unfortunate even though the rest of the bike came out nicely: 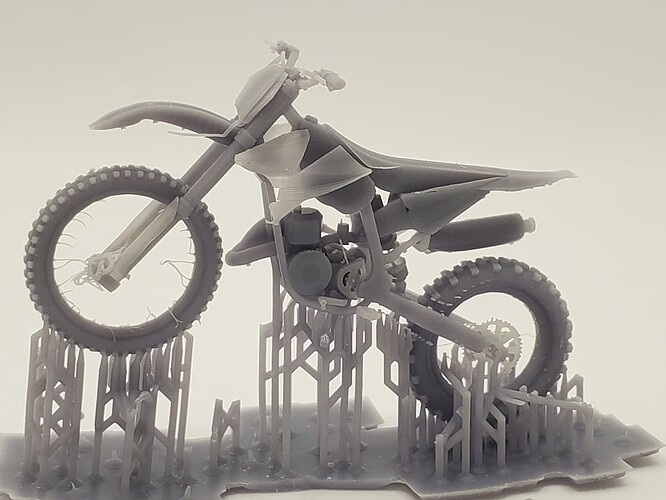 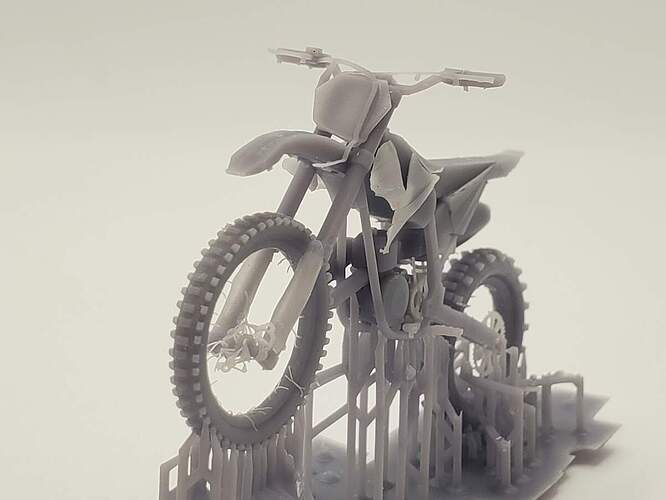 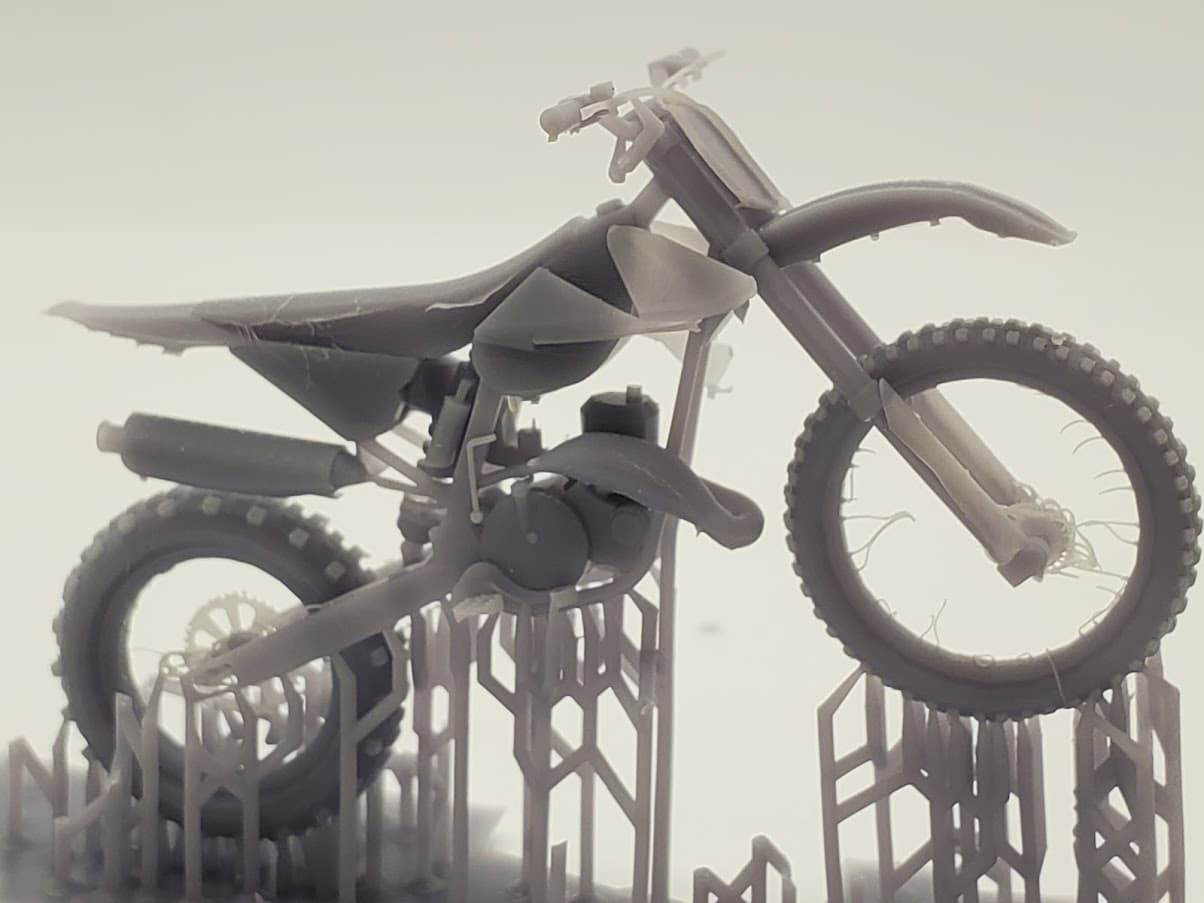 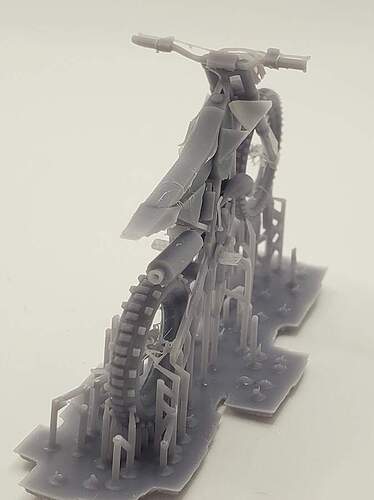 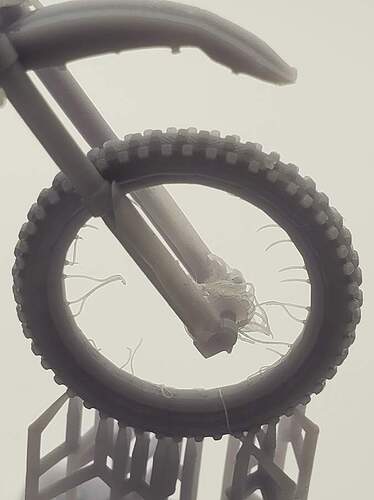 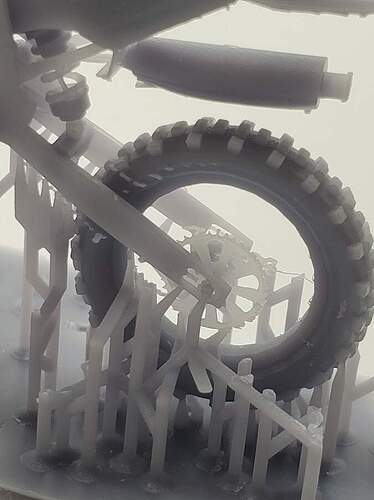 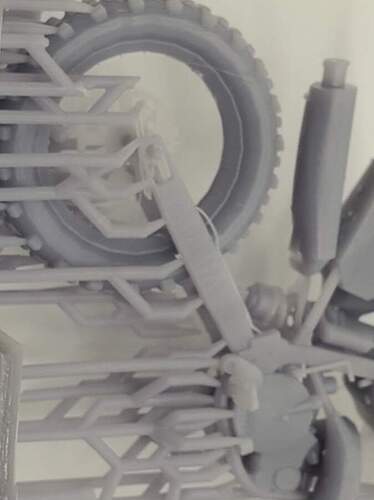 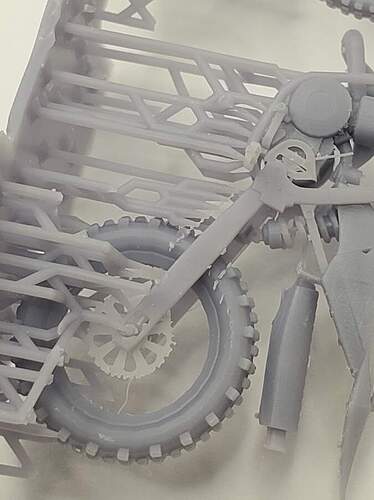 You could always use the PE spokes from one of the Bronco or Miniart motorcycle kits. 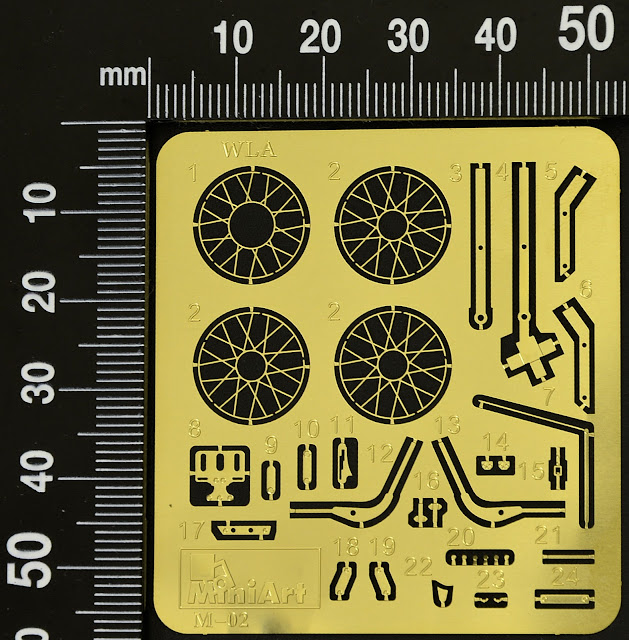 Yeah, that’s nice but it will be forcing a separate purchase. I wanted to do a one-stop shop approach.
I may be able to pull it off in 1/16 if I over-scale it a bit but probably not in 1/35.

Might be your printer and a limitation but I have seen 3D printed spokes for sports cars. 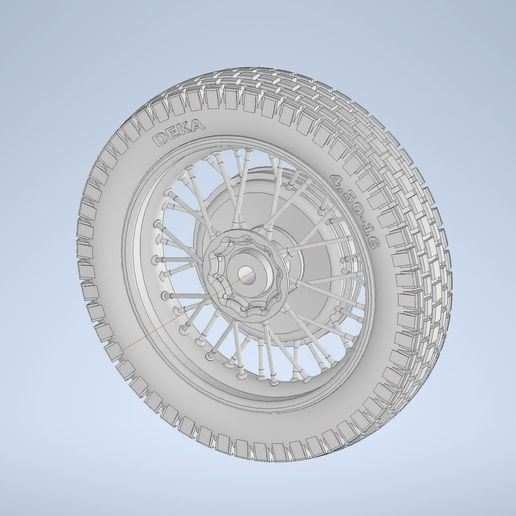 It’s a shame to let that work go to waste. Some folks use fuse wire to replace the spokes on kits. The most time consuming part of it is drilling the holes. If you could print those wheels with holes in the hubs and rims (or even dimples) for the spokes, those who choose to could add the spokes themselves. They look better than PE anyway.
Those who don’t, well - when moving the spokes are a little hard to see anyway…

If you did the hubs and wheels in two halves this method would work as well: 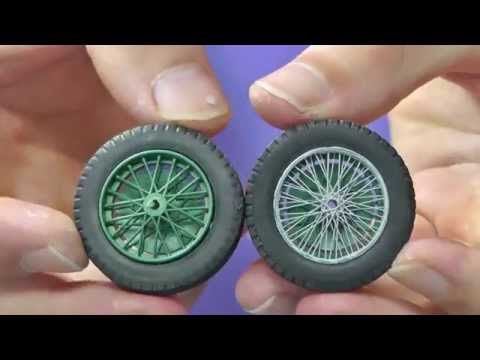 Ryan and Rob,
You two just gave me some inspiration on how this may work!

OK, it may work if I overscale the spokes a bit more - separate the wheel parts from the bike in CAD and replace the existing spokes with thicker wires in CAD.
Back to the drawing board then. Thanks.

Great how to video, thanks.

@James_Lee, GTG keep at it.