I’ve seen their website and their figures for sale. I thought they were Chinese but they give a Vietnam address on their website. Anyone know more about this company?

I also think they are a Chinese company… They have been stealing bits and pieces of other companies to make their 1/35 scale Special Forces figures, making Frankensteins instead. They have several complete Live Resin figures, with different head or a weapon, selling under their own label. They also copied Live Resin ATV as well.

I’m not sure about figures in other scales, but I would stay away from their 1/35 stuff.

Don’t shoot me for this, but I’ve bought several of their ORIGINAL 1/24 scale figures and they are well worth the price. I am not certain, but I suspect that their figures are 3D designed and generated; probably a printed master is used to make a mold (their products are definitely mold cast). Details and facial features are excellently rendered, and the resin used is high quality. I think, that because of the absence of a sculptor, prices can be as low as 1/3 - 1/4 the cost of a comparably scaled figure from a Western company. However, Yufan store also sells many knock-offs from Western figure companies! A way of distinguishing original Yufan products from knock-offs is that most (if not all) originals are shown in B/W pics, while the knock-offs are mostly in color, the pics having been lifted directly from the original companies sites with painted examples.

I find the YuFan figures’ topics interesting and unique, but their poses exaggerated, not proportional, and their weapons and gear not really accurate. Thus, I have not purchased from YuFan despite the low prices.

I can see the appeal for Sci-Fi and Fantasy modelers due to the cheap prices and “Anything goes” mentality in regards to accuracy. Some of the figures’ appearances are cartoonish.

The website address is from Vietnam, but only add to the shadiness of it.
“Yufan” has no meaning in Vietnamese, that’s just not a Vietnamese word. (I’m Vietnamese)
They make some figures about the China-VIetnam border war, but only make figure for China’s side, which is odd for a Vietnamese company about that subject.
Their items are shipped from China (from my only order).

And unfortunately @Biggles50, even their b/w pic are actually took from the 3D software, with pirated files (as in no credit to the original author). They did work with some artists as distributor, but usually in a very bad term.

Years ago, a USA resin Garage Kit maker told me that he searched the world for a resin caster and discovered that the best and cheapest ones are indeed casters in China. So he went with China.

It’s very similar to Apple Mac and iPhone products—designed in California and “Made in China.”

Fast-forward to present and he stopped selling resin Garage Kits because it turns out this “one man band” caster in China moved shop and thus had rising casting costs which he passed on over. Then COVID-19 hit and that led to supply chain issues and the cargo ship backlog along the coasts and Customer demand exceed his supply. So he lost his Seller reputation (Customers were wondering where their orders were and the best he could say was “Coming” when there was no tracking number or accountability from China) and he now just sells 3-D printed STL download files. A shame, really, but lessons learned as European resin Garage Kit vendors don’t seem to have these problems.

So, yes, it’s very possible that YuFan is Vietnamese and the castings or 3-D printings are “Made in China.”

In looking at YuFan’s products, besides copying some of the original sculptors, I do wonder about the scale of their items as the carbine on the SEAL figure seems too small, or just “off.” But the prices are cheap enough though to substitute with other brands for better scale and realism. In the end, it’s always the buyer’s decision as to control of his or her stash.

As to “some figures appear cartoonish”, I believe that may be deliberate as they may be based on anime characters, and some look like they may have been inspired by Disney characters. Most are sci-fi, or fantasy based, and some are genuinely bizarre! They do have a couple of Conan inspired figures which are excellent for the price (I have them in my stash) and look every bit as good as their 3D render illustrations.

@Biggles50 So true. The Asian “Fan Boys” modeler crowd is a lot different than the Western modelers when it comes to topics. I can see the heavy influence of WW2 German topics at YuFan.

They also have what seems to be, some nicely done Chinese Nationalist troops combatting Japanese. The Chinese troops are outfitted in all kinds of “donated” European equipment.

I can find the original artists for most of their sci-fi stuff, because they don’t make their own, they just rename things.

Or this: 1/24 Queen of hunters Reisn model TD-2633 – Yufan Models Store
is from this guy (original): NORDIC VALKYRIE BY CREATIVE GEEK MB | 3D Print Model
You can follow the original artist to see the creation of the 3d models.
Yufan renamed or using intentional typo to deceive the search engines. The renders are from the files they took, not their.

So…Yufan buys the stl. files, prints and casts them and sells the product. I don’t suppose Yufan pays a royalty to the original designer per item sold! Anyway, I have no way of printing my own items, even if I were to purchase the stl. files myself. So if you want the figure, what’re ya gonna do?

The fact that they don’t give credit to the artists put their own credit in as if they made meant that they obtained the files through illegitimate means. The fact that they discredit the original authors when they sell things are why they are in bad terms as retailer with the authors in the pass.
You can find printed models around the internet, etsy.com or ebay are good place to start, from people who obtained the files through legit way and respectful.
They might be more expensive, because they are not from China. Nevertheless, they generally accept the custom scales and modifications.

I’ve seen boxes from China of figures saying who originally made said figures. It cannot be that difficult or expensive to get a license to make someone’s original figure.

Well…one of the above mentioned designers charges 20 USD for the file; if you don’t have a printer, and don’t know someone who does, you look for a service that does (?), and that will COST! Then there’s shipping to send the finished product to you. So, no, it’s not expensive, or difficult to get the print file, but it’s only useful if you have your own good quality printer!

I wasn’t talking about you getting the files, I talk about getting the printed figure. You don’t to buy the file to get the figure.

The Star Wars Darth Talons above (that Yufan used another star wars character name to deceive), you can buy the printed model here for example: 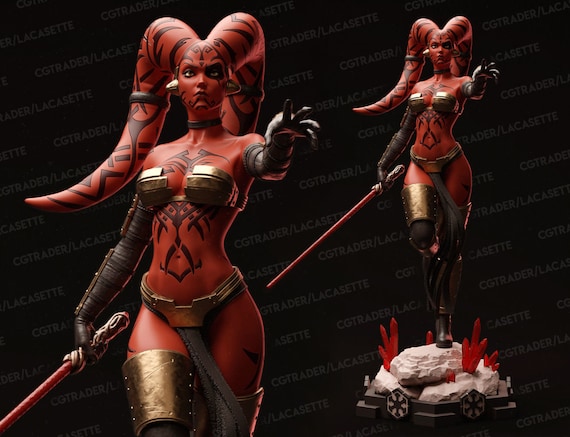 All our Figures are 3D printed on SLA type printer using special resin for get best quality and durability for the item, Some models are hollowed, Wall thickness Will be 2 mm Item Description: Condition: shipped as Kit, you will need to assemble and...

It is expensive? yes. However, if you read the description, they sell it full size, which is a 19cm (near 8") tall figure! You can always ask the retailer for custom scales, they can usually do it down to 0.05mm of accuracy, multiple pieces or one piece, or other simple modifications you want. They will then give you a custom invoice. They accredit the author and everything.

Yes, ETSY is legit and ETSY sellers do say where their STL files come from, pay for the license of the product, and show the print seller’s location.

I buy 3-D printed figures from ETSY and I often avoid the printers and sellers from China.

Most ETSY sellers know 3-D CAD so they can manipulate the STL file to your scale preferences. Some ETSY sellers even include and print spare parts at a fraction or no cost (FREE!) if you ask for some!

You’ll be surprised as to the great level of Customer Service some ETSY sellers give out because the STL files are downloadable by nearly anyone so competition is fierce to print the same STL files. As such, many ETSY sellers do go out of their way to make the buyer happy.

The ETSY star-rating is a rating of the print quality of the figures…some are kits and some are statues. I often buy five-star rated 3-D printed kits and figures.