Here’s an early attempt at a very simple knocked-out vehicle. As it was not too pricy, the Zvezda (3617) Soviet BA-10 Armored Car was the perfect sacrificial lamb. 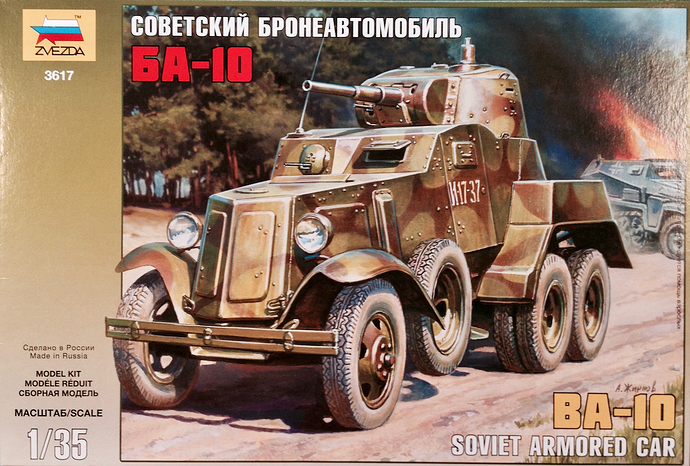 A couple of reference images. 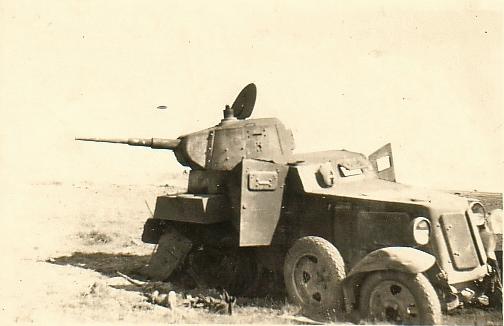 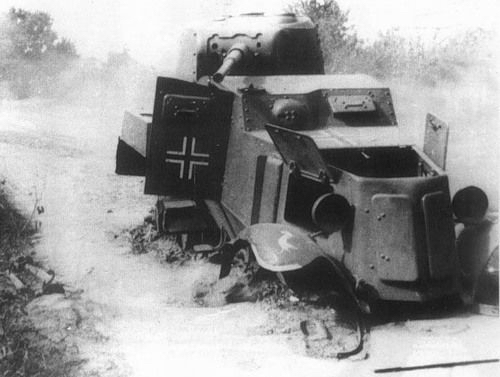 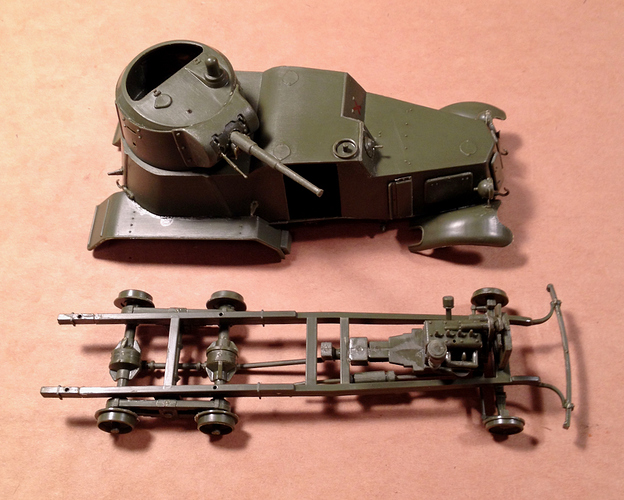 … and after a little incoming Dremel Tool! Also, some very basic scratch-building. 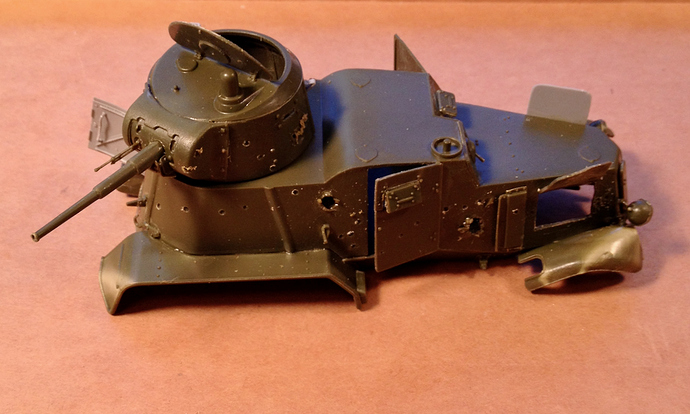 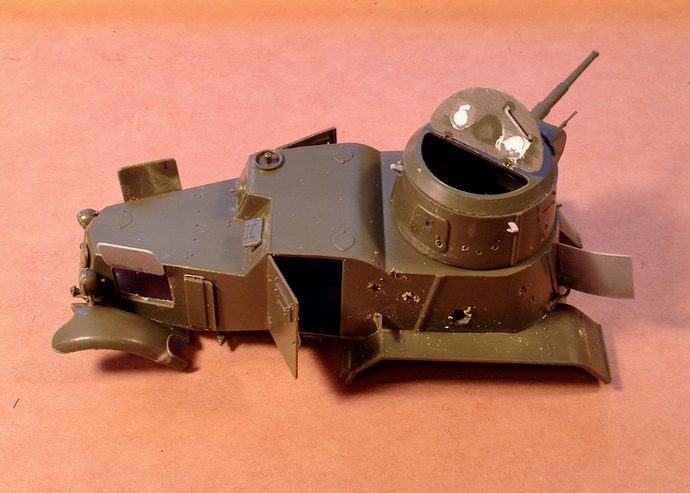 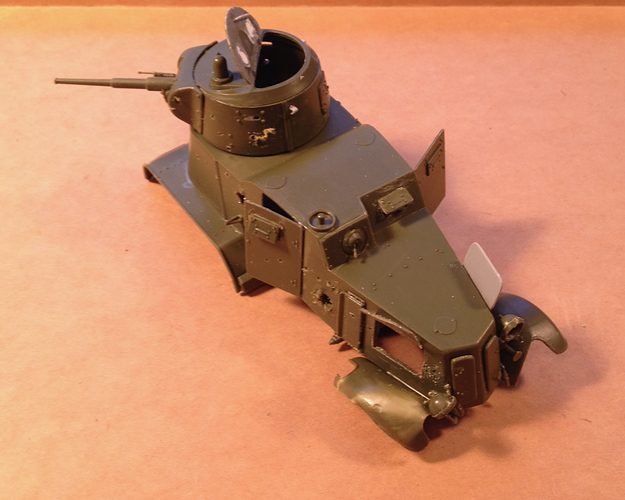 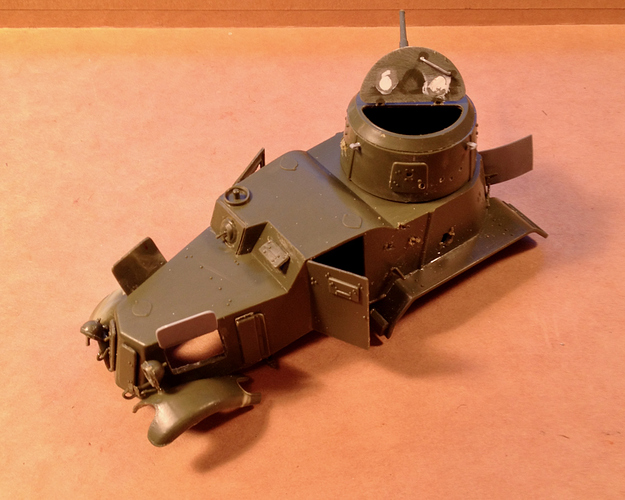 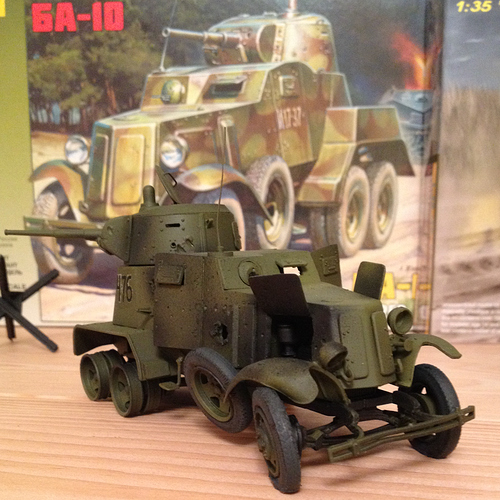 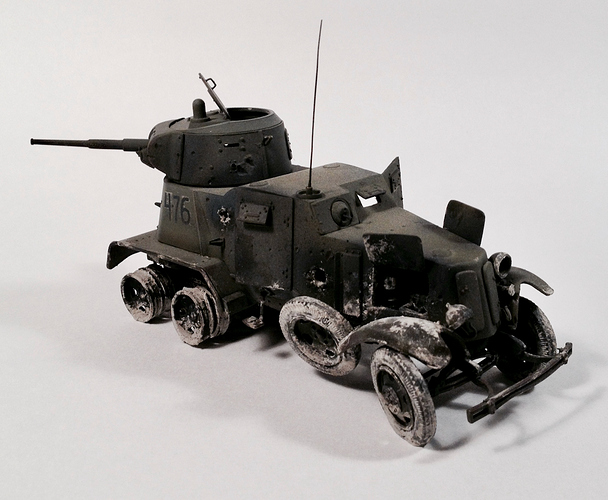 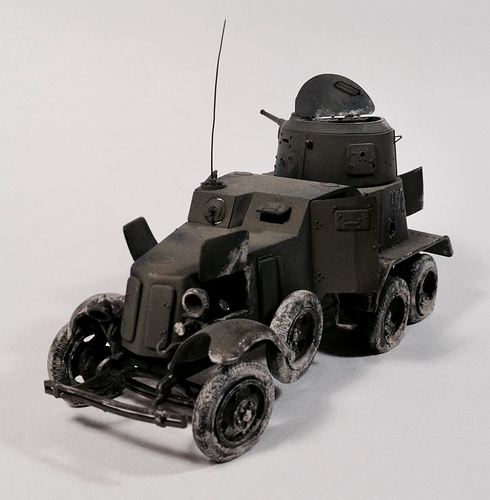 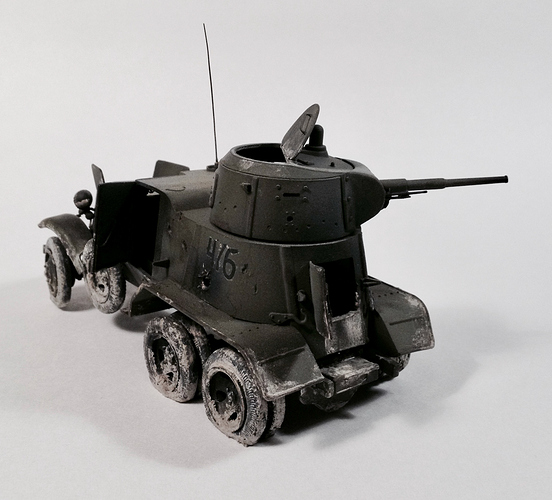 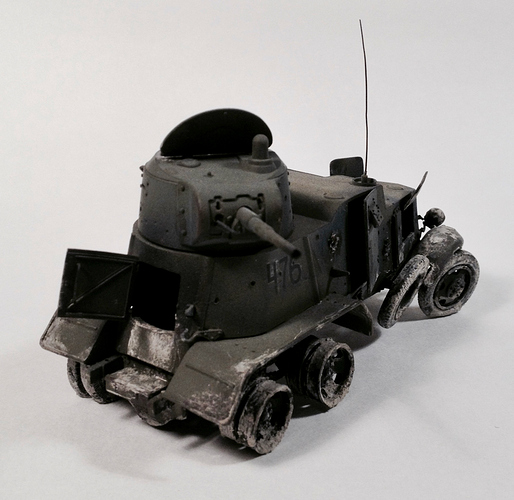 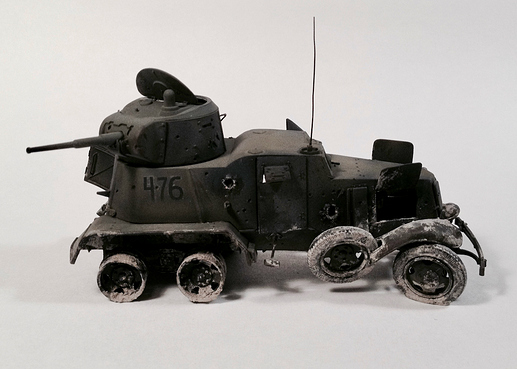 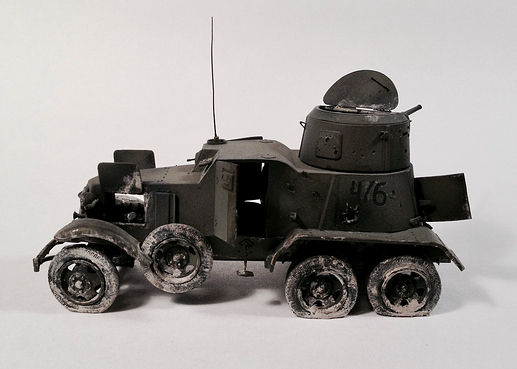 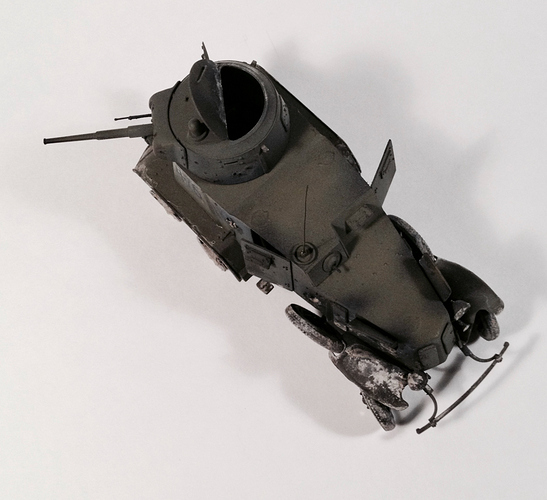 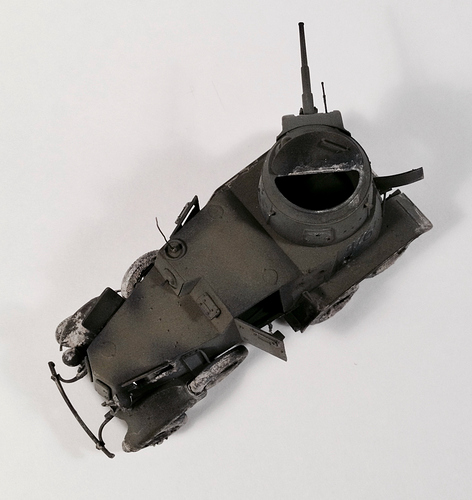 Thank’s for having a look!

PS: How about some rubble and figures to go with that BA-10? 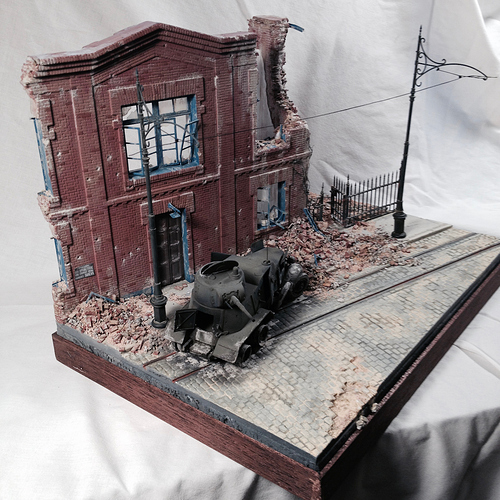 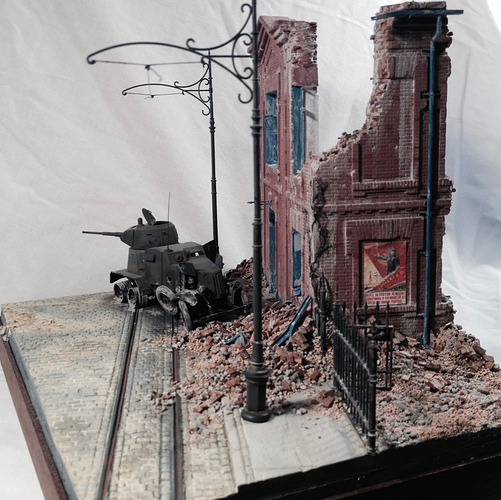 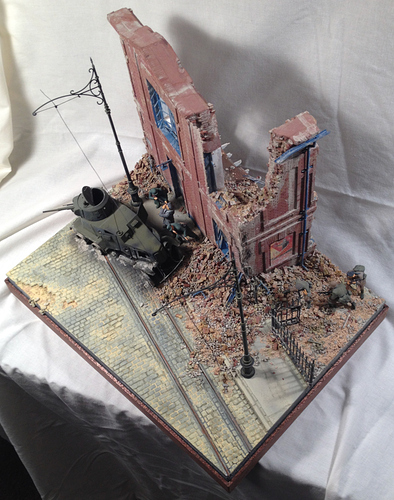 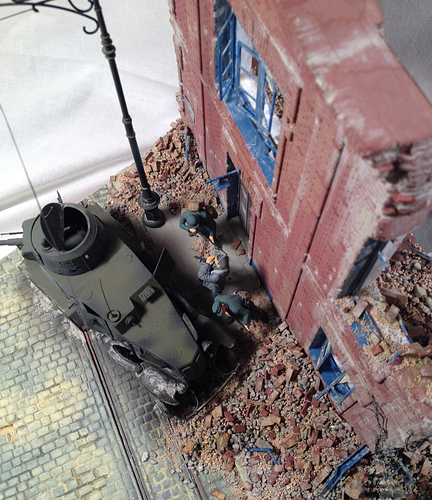 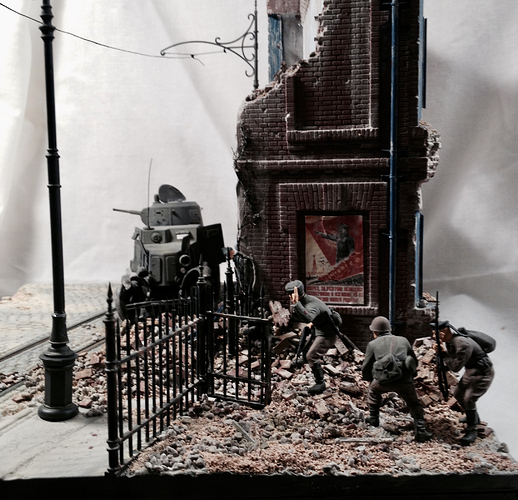 Very cool. I really like what you did with it.

Thank’s, guys! … Gotta’ admit: The new KitMaker has made posting images fun again — inspires me to get back to the workbench.
—mike

That looks really great Mike. The wreck looks great on its own, but the Dio backdrop makes its really come alive ( or dead in this case ). Where was the Dio from and was it all part of s kit or scratch built bits as well ??

Will there be another vehicle in the diorama?

… Where was the Dio from and was it all part of s kit or scratch built bits as well ??

John, Glad you like the diorama! … Nothing new, just an old build which I did back in 2014.
The kit: MiniArt (36026) ‘Russian Street.’ Unfortunately, the kit has been discontinued for some time now — a mould which should definitely be rereleased as MiniArt often does.

As far as scratch-building: Once I had the vaccu-form walls assembled they needed quite a bit of edge filling and seam cleanup. Then, I added individually cut bricks to the ruined edges. After which, I added several tons of scratch-built rubble onto the base to further meet the demands of Armorama’s ‘Rubble Police.’

Haha! In addition, I opted to cut-out the tram track detail and replaced it with Evergreen strips and so on…

The figures: MasterBox (3571) “Who’s that?” 6 figure set — also discontinued. If you can find either of these kits, they’re well worth building. HTH. 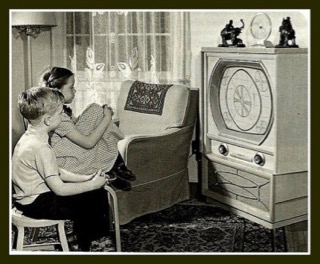 Will there be another vehicle in the diorama?

Hi Jesper, Thank you!
There are no more vehicles planned. I wanted the scene to have a sort of perspective impact with the figures clearly visible when viewed from street level.

Knocked-out? Knock-out! Never seen this one before either, fantastic work & yessir I am a Commissioner Armorama Rubble Police (CARP for short…I could change that) and…OK you can walk…this time! I see cobbles & tram lines, how cunning there’s no room for a tram…wish I’d seen this 2 years ago

… Commissioner Armorama Rubble Police (CARP for short…I could change that) and…OK you can walk…this time!

As they say: He who has the most trams, wins. … You, sir, have three trams (count ‘em, three!) with tons o’ very impressive scratch-building to-boot!

… And I have only one (as in singular) completely un-started tram in a box.

You need to build that one so I don’t do something rash and try to added to my boxed collection of trams.

Do like the build. One question, I see you have the right rear wheels burnt out, why not the others?

Thanks Mike, will keep an eye out for it on evil bay lol…it may pop up.

Aha…Mike so are you planning to make this dio even more tramatic?

John I would have donated you mine but… 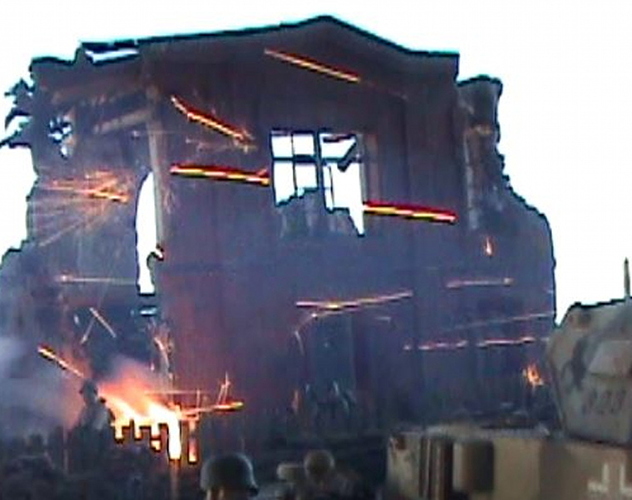 Do like the build. One question, I see you have the right rear wheels burnt out, why not the others?

Ryan, Thank you! I wanted to give it that “California Lean!”

Another reference image showing some of the tires (tyres) still in tact.

[edit] I’ve copied this reference image up to include it in my original post.
—mike

Makes sense and the pic helped to wrap my head around the idea. Thanks. 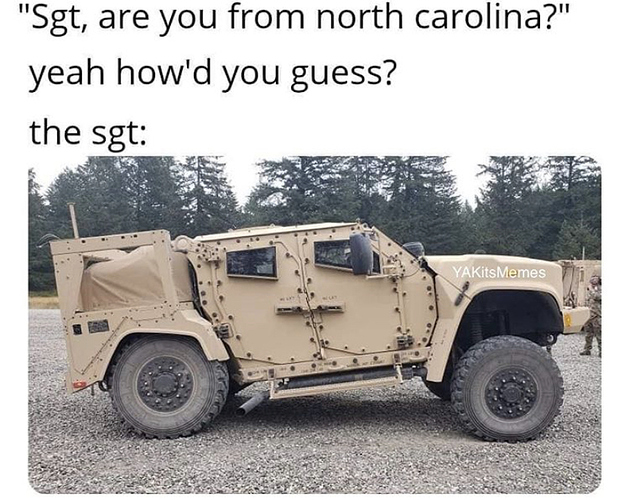 Aha…Mike so are you planning to make this dio even more tramatic?

Tim, I’m not licensed in the craft of pyrotechnics. I’ll just have to leave that to you. Haha!