Cleaning out junk to haul to the local landfill and found these two relics from 21st Century Toys Ultimate Soldier.

The Panther was taken out of the box at a club meeting but is otherwise mint.

The Tiger hasn’t been out of the box and still has factory tie downs.

Long ago I’d planned to detail, repaint & weather these two. Today trying to decide if they are worth selling, should be repainted & weathered or need to find a friendly

They are worth money, especially if you bought them when they were being clearanced out at $20 a pop.

The Tiger can go for around $200+/- in that condition. The Panther not as much having been removed, but still good money. Guess it depends on what you paid to get them.

If you got them back in the day they are worth selling or keeping. I still have one of each that I am going to repaint, plus a couple dozen figures.

Thank you for the info @brekinapez. The Panther may end up being a keeper to repaint and the Tiger needs to go to someone else.

Bought them at Toy’s R Us, new for $39.99 each according to the price tag on the Panther.

How accurate would you say they are? As for like the details and such.
With the size it will be awesome to paint and weather! Please do a build thread when you do!

Tools and such are mostly molded on. Hatches have hinges a bit oversized as the are meant for the figures to be put in them. They are toys but really accurate and in proportion unlike most current military toys if you can find them. But compromises were made to to enable working features.

Their planes have definitely been used as frames for super-detailing and some of them are sold as kits now (although much simpler than a normal kit). I used to have a few of the larger planes but I am down to a Corsair and a Saberjet now.

I feel the Panther G is about on par with the 1/25 Tiger & Panther kits Tamiya did in the 1970’s. That’s surprisingly good and consistent for a toy.

As @brekinapez mentioned proportions are very good. Much better than Tamiya’s original Panther A.

Late Panther G, with raised cover on engine deck & chin mantlet. The jack block is the tampered style one that was often used on late Panther G’s. The tool shapes are off a bit. Tracks don’t have hollow guide teeth. Interlocked plates have flame cut end texture. Molding of details is a little soft. The fire extinguisher is pretty lame. 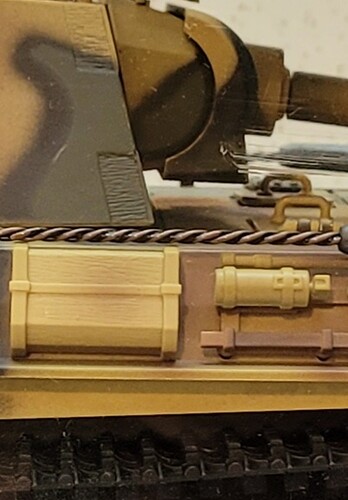 It would make a nice winter detailing project. My Panther detailing lore is rusty probably need do some read and review plus grind out a couple of 1/35’s Panther’s.

Way back 1990’s, Verlinden came out with their BIG Panther resin model. It was unaffordable at around ~$400 in the 1990’s or about $665 today. The toy Panther was $40 and only a little smaller than the Verlinden Panther A plus it wasn’t a resin kit 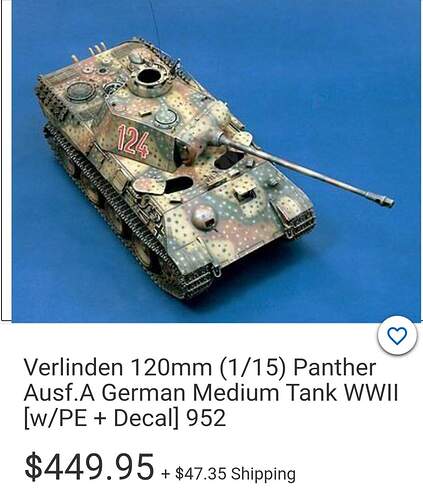 It would make a nice winter detailing project.

This just seems like a seriously cool project. Popcorn on standby.