I’ve always wanted a Sherman Calliope, so I’m taking a stab at building one. This is the Academy kit.

Overall, the construction is fairly good. The Calliope tubes themselves are somewhat finicky. 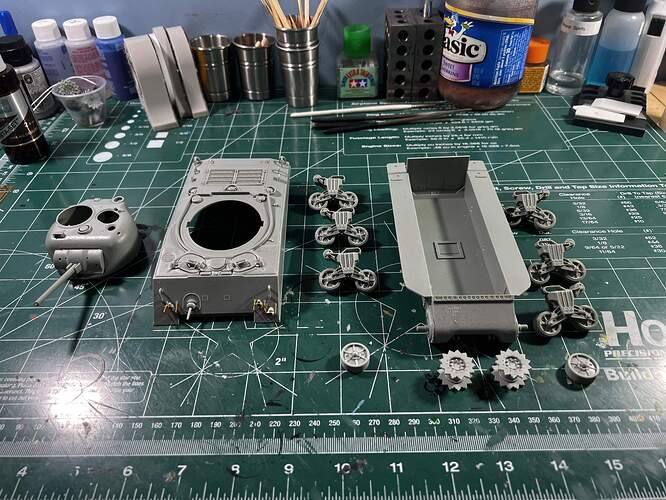 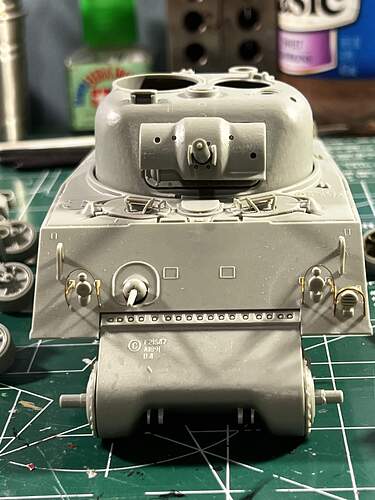 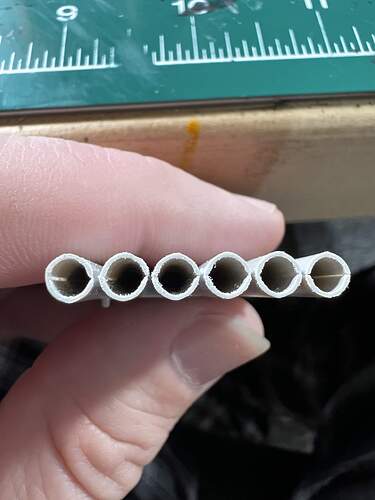 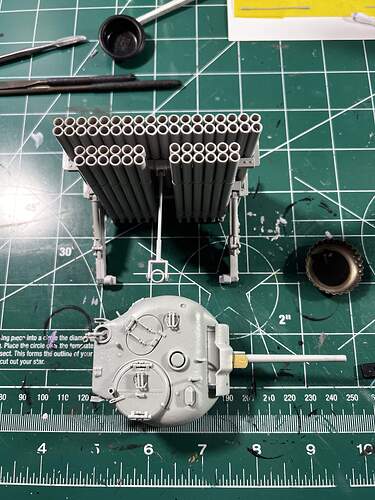 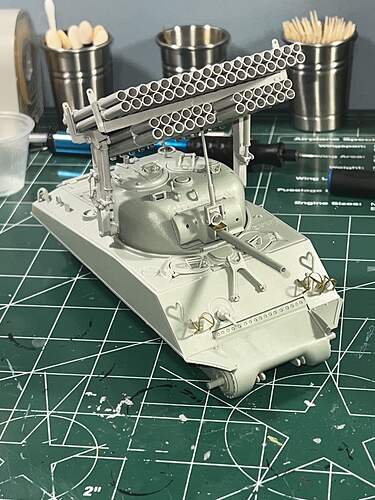 Looking good so far. Did these have some form of deflector for the engine decks ?

The kit doesn’t come with one, and the source photo I’m working from doesn’t seem to have one.

Do you know if they all had them, or if it was a later addition? 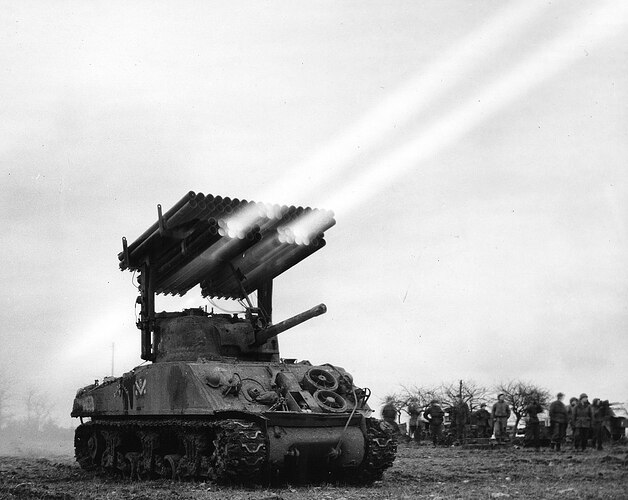 Sorry, I really don’t know mate. I was just looking at the image of yours and a few others and I noticed that I couldn’t see anything looking like one. Looking at the angles though, it looks like when at the extreme angle, the blast looks like it would just miss the decks … maybe they didn’t have a defector ? I’m sure a Sherm guru will know …

They had them if the base vehicle was a M4A3 as it had back deck that had louvers.

Someone mentioned, I think it was in one of the threads/topics about the fancy new Calliope conversion set, that some Sherman versions needed deflectors or protection for air intakes on the engine deck.
See post by @Dan above …

aanndd the Academy kit is an M4A3 …

Edit: I wonder though … What is the maximum elevation of the Calliope?
It was elevated by a rod connecting it to the barrel, and tank guns usually don’t elevate that high … 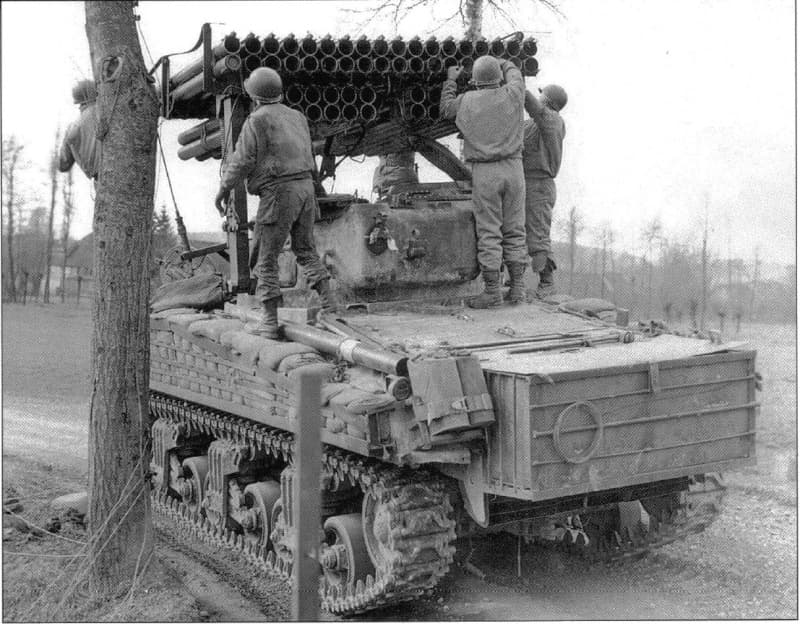 Pages for logged out editors learn more 64 × 4.5 in (114 mm) rockets (T34E1), The Rocket Launcher T34 (Calliope) was a tank-mounted multiple rocket launcher used by the United States Army during World War II. The launcher was placed atop the M4 Sherman, with its prominent vertical side frames anchored to the turret's sides, and fired a barrage of 4.5 in (114 mm) M8 rockets from 60 launch tubes. It was developed in 1943; small numbers were produced and were used by various US armor unit...

Elevation +25 to -12 degrees
Later models of the launcher also had flame deflectors to help prevent rocket exhaust from entering the engine compartment.[3]

Found a pic of one- Now hear this! Originally envisioned as the U.S. Army's counter-proposal to the AVRE's 290mm spigot mortar for anti-fortification work on D-Day, the T34 'Calliope' was so named due to the arrangement of rocket pipes that looked like the pipes of an...

This one sure doesn’t seem to have one…

Edit: I wonder though … What is the maximum elevation of the Calliope?

If you look at the one I built, you’ll notice that the center “ring” that attaches the Calliope to the turret is welded on top of the gun, rather than going around it (as designed).

It’s my understanding this was a field modification to get a few extra degrees of elevation in the thing.

You can see that same modification in the picture above

25 and 30 degrees elevation, only for reference 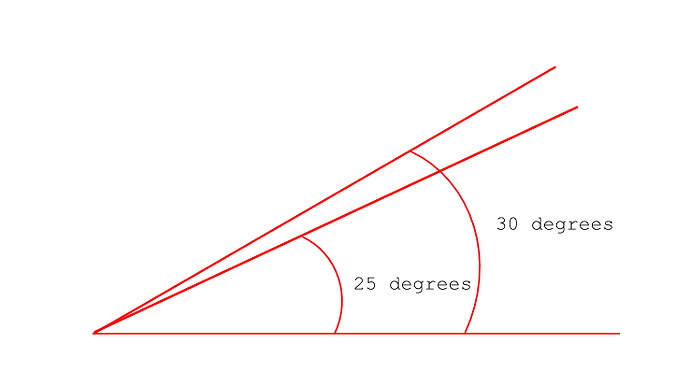 Thanks for the reference, I just checked it out, looks like I am within spec. 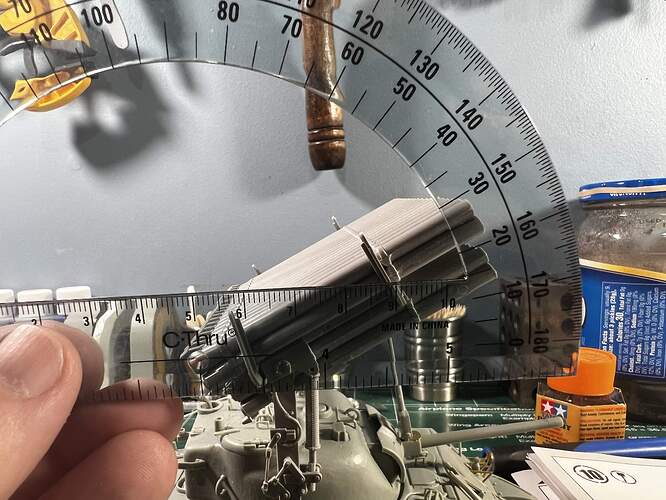 I can see the red lines coming out now.

Cool thread and build.
I have the Italeri-version that I am itching to give a go.

Tonight was mostly a research project, trying to identify and source parts for all the pieces on the front of the tank. I’ve identified most, but I have a few questions, so please chime in if you have ideas. You can see the full picture here, but I am focusing on what is on the front. I’d really appreciate some insights on the bolded lines below.

Thanks for the advice everyone. Any insight you can provide is appreciated. 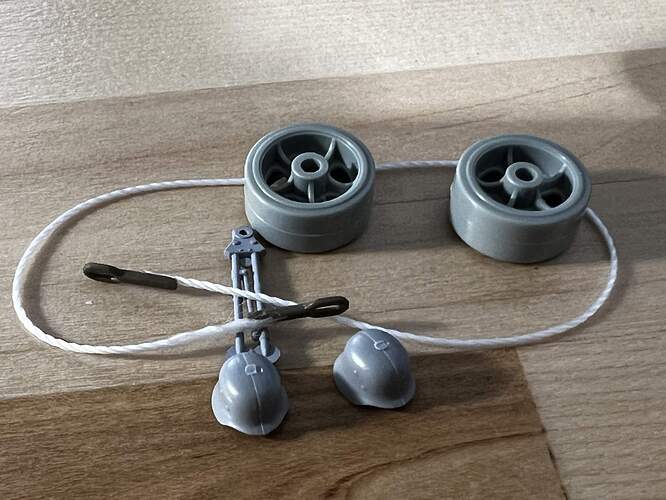 I’d say roughly yes to your ideas.
The box could be wood or a heavy cardboard ration box.
Not sure what #4 is but looks metal to me.
#12-a shovel? Entrenching tool? Could be a handy poop shovel.
#9-sometimes painted, sometimes not.
#11-?

Currently my best guess for 4 is something like this 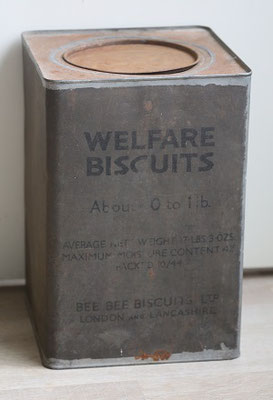 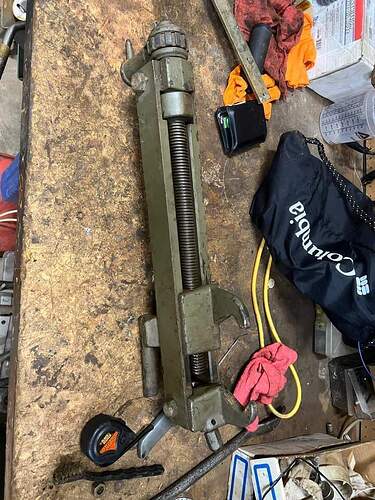 From a suggestion on another forum, I’m thinking 3 might be a track changing tool.

That’s it. Shapeways had a track jack in 35th.