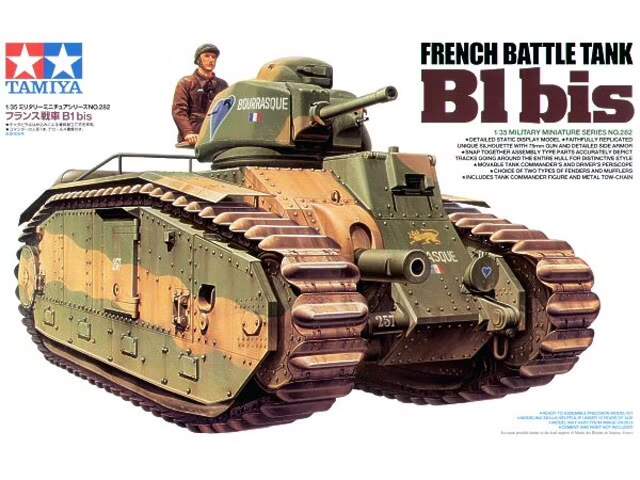 As a modeller, I have some areas of interest; Canadian and British tanks, Japanese everything, and French tanks from the 1940’s. There is hardly a tank more representative of the good, the bad, and the ugly regarding the French tank arsenal than the Char B1. From Wikipedia:

The Char B1 bis had a top speed of 25 km/h (16 mph) provided by a 307 bhp (229 kW) petrol engine. The first batch of 35 Char B1 bis used the original engine but from 1938 to May 1940 they were slowly re-equipped. Its weight was about 31.5 tonnes. The operational range was about 180 km (110 mi) which was similar to other tanks of the period. At 20 km/h (12 mph) the three fuel tanks (total capacity of 400 l (88 imp gal)) would be exhausted in six hours. To improve matters, at first, trailers with an 800-litre auxiliary fuel tank were towed but this practice was soon abandoned. Instead Char B1 units included a large number of fuel trucks and TRC Lorraine 37 L armoured tracked refuelling vehicles specially designed to quickly refuel them. The last tanks to be produced in June had an extra internal 170 l (37 imp gal) fuel tank. To cool the more powerful engine the Char B1 bis had the air intake on the left side enlarged. It is often claimed[citation needed] this formed a weak spot in the armour, based on a single incident on 16 May near Stonne where two German 37 mm PAK guns claimed to have knocked out three Char B1s by firing at the intakes at close range. The air intake was a 6-inch (150 mm) thick assembly of horizontal slits alternately angled upwards and downwards between 28 mm thick armour plates, and as such intended to be no more vulnerable than the normal 55 mm side plates.

Over the production run the type was slowly improved. Tanks number 306 to 340 carried 62 47-mm rounds (and the old complement of 4,800 machine gun rounds); later tanks 72 and 5,250. However the B1 bis had fewer 75 mm rounds compared to the earlier B1 : 74 instead of eighty, normally only seven of which were APHE ammunition. Early in 1940 another change was made when the ER53 radio was replaced by the ER51 which allowed spoken wireless communication. The company and battalion command tanks also had an ER55 for communication with higher command. The crews of the 1re DCR kept their old sets however, preferring them because the human voice was drowned by engine noise. 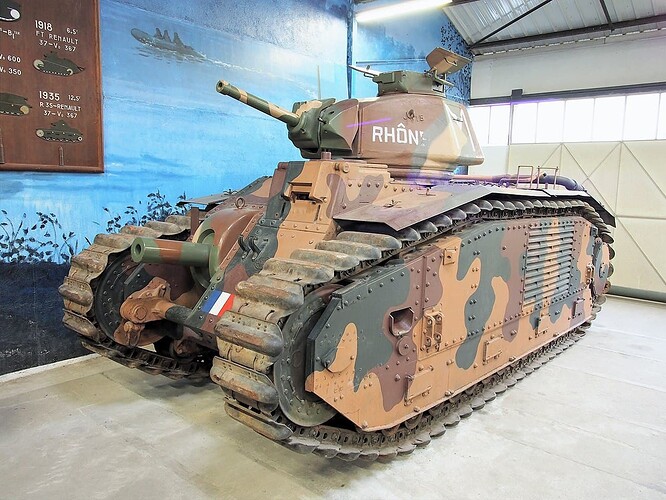 Which I think sums the situation up quite nicely. This was a tank that was quite promising on the hard factors - good armour protection, an ostensibly powerful armament (75mm APHE would have gone over quite well in 1940 I imagine), and such features as a radio. Yet considering the soft factors - the quality of the radio, the compliment of ammunition, and the fact that each member of the crew had to focus their attention on multiple tasks, not just gunning, driving, or commanding, perhaps it was not as good as it first seems. Also, I recall the Tall Tank Man ™ mentioning that the APX-4 turret on the B1 bis was quite demanding to produce, resulting in at least a couple hulls being shipped sans turret. Making a StuG-francaise, if you will.

Now. To the kit - finally. So my plan here is to build the kit basically entirely OOB.

“But Dennis” you may ask, “you stingy, overly-frugal penny-pincher you, why will such a nice kit be built OOB? This kit is crying out for Fruilmodel tracks, or metal barrels, or photoetch?” Well, two things:

This kit initially caught my attention because it is one of the few Tamiya kits that has workable tracks included. From what I’ve heard, these just click together, and considering how awfully corroded the tracks of these tanks got, I think these will be a nice base for some rust tones.

Anyways, in the morning I’m going to post some pictures of the sprues and moulded-on detail, as well as the tracks.

I already have a paint scheme selected for this tank: 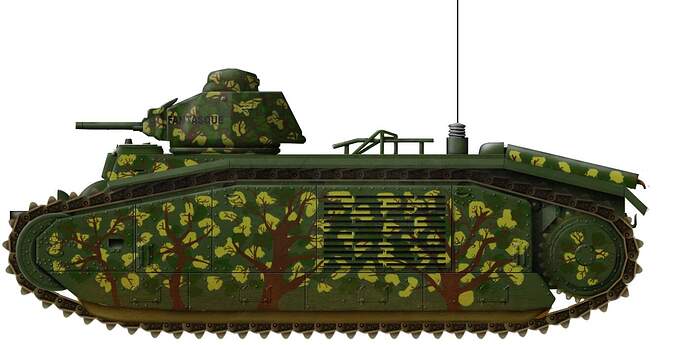 This is the tank “Fantasque”, which was used by the Versailles Tank School in 1939, and which also saw combat in 1940. It had this intricate, highly-artistic camouflage applied experimentally. Now, this is pure conjecture on my part, but considering that last year Canadian Leopard tanks wore similar camouflage 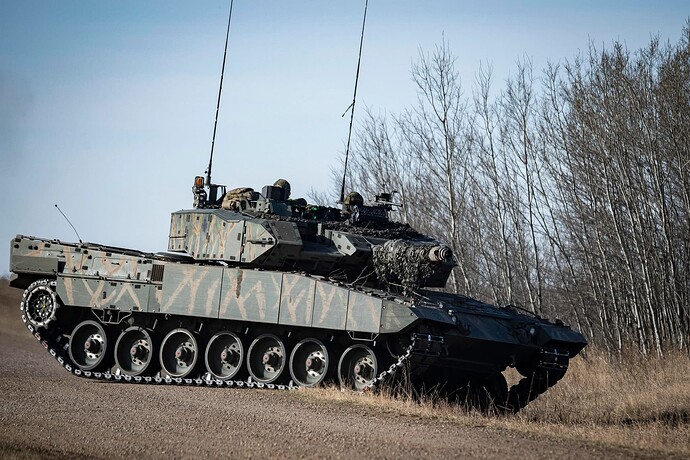 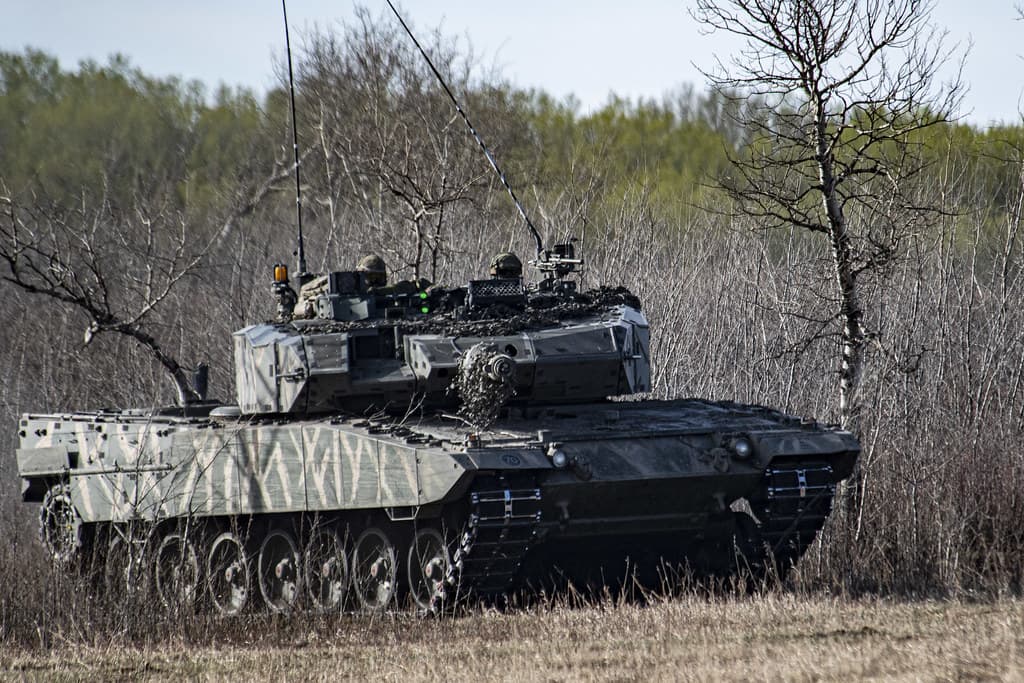 The idea generally seems to be that by using a hyperlocal camouflage pattern that’s well suited to the surrounding environment, one can make a tank that can blend in incredibly well. 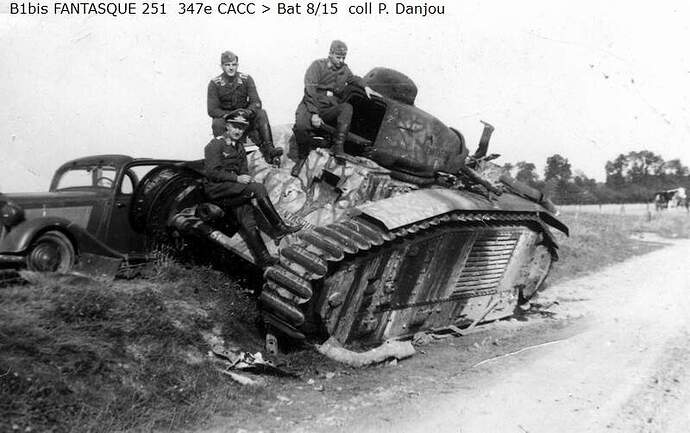 Of course, it didn’t work out too well in the end…

So yeah! I just now realized that I wrote a wall of text

I can’t wait to get started on this project, and thanks to anybody who follows along!

Oh. Good choice. This really is a great kit. It doesn’t need much adding to it. I just added the wee screw holes in the top of the cupola and the piggy-tail on the top of the 75mm mantlet.

Replacing the tracks with metal would be an exercise in throwing money away for no good reason. The Tamiya ones just click together and from memory only need a quick pass with a sanding stick on the top surface.

…I have another in the stash somewhere…

This is a good kit to not use a lot of aftermarket on.
https://www.perthmilitarymodelling.com/reviews/vehicles/tamiya/tam35282.html

It does appear that camo scheme uses the narrow fenders so that is something to watch out for.

I have built the Tamiya kit. I actually acquired an Aber set for mine but it was a waste of money. Yes the Tamiya fenders are a little thick, but using a blade and sanding stick that gets remedied easily. There are the couple of tweeks that Craig mentions, but also you need to add the 6 hex nuts around the hull main gun aperture. 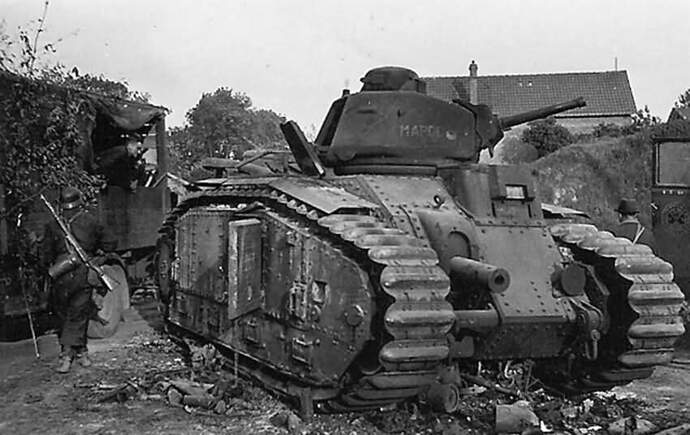 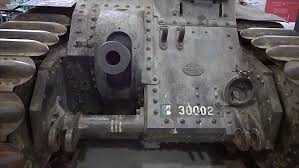 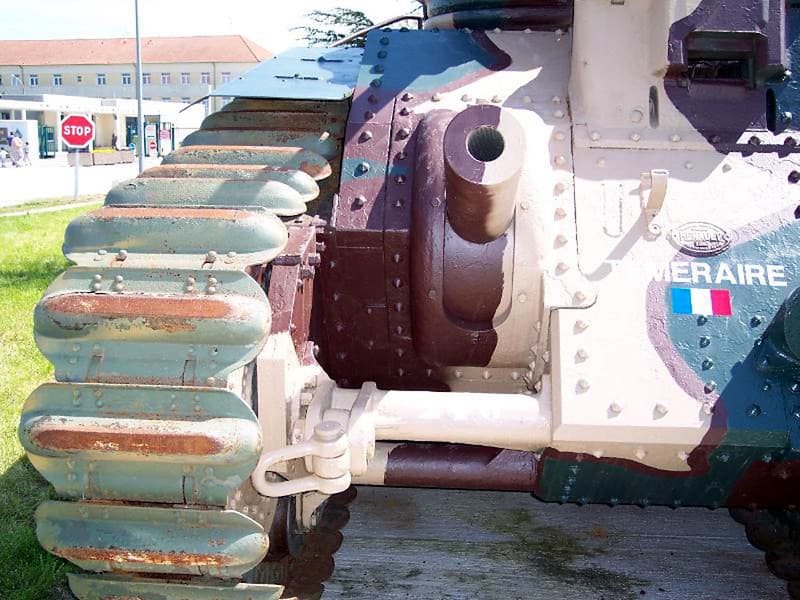 Only real niggle is the 2 part concertina antennae mount. The seams are a nightmare to clean up.

I shall go put the kettle on. That paint job should be something to see.

Why waste money on after market tracks. And … those that cant paint , buy. Spares on left arent painted yet. 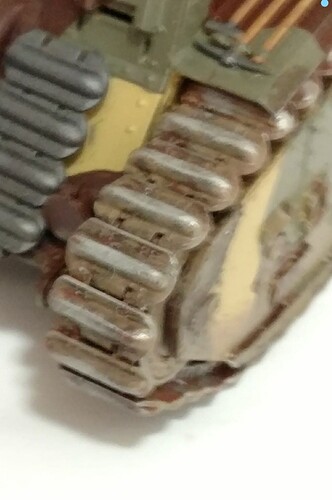 It looks like your gearing up for a great project. I got the “German” version in the stash so I’ll be following along.

Thanks for all the thoughts guys! I especially appreciate knowing what to correct (IE the bolts). Also seems that my sanding attachments for my Dremel will get use with those fenders. Anyways, here are some photos I snapped before work - if you already have or built the kit, then this is old news to you, but I thought there would still be some details that would be interesting to point out. 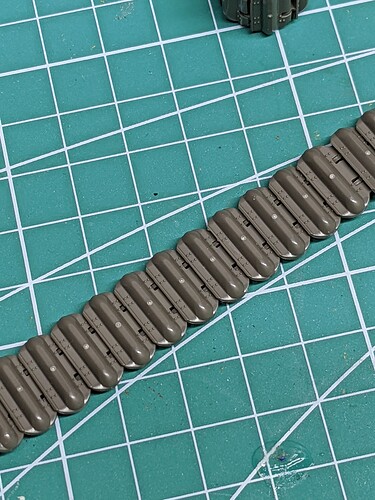 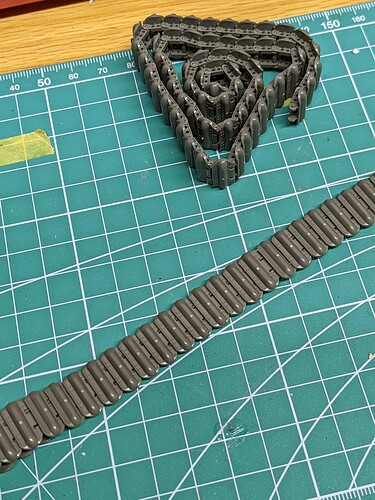 I built both runs of tracks up. Took me less than 20 minutes, which is faster than even link/length tracks! It was incredible! I don’t know what weird juju the Tamiya engineers have performed on them, but they hold perfectly! Totally different than the Border tracks I’ve used. 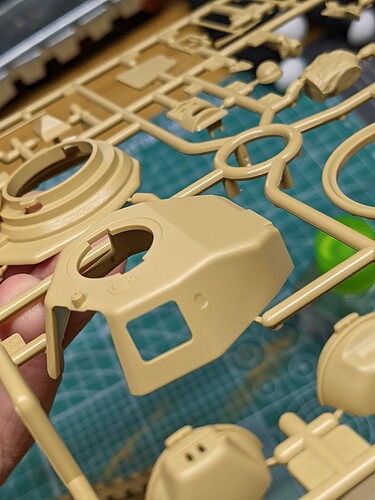 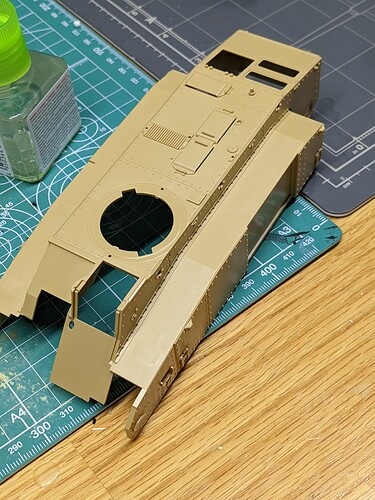 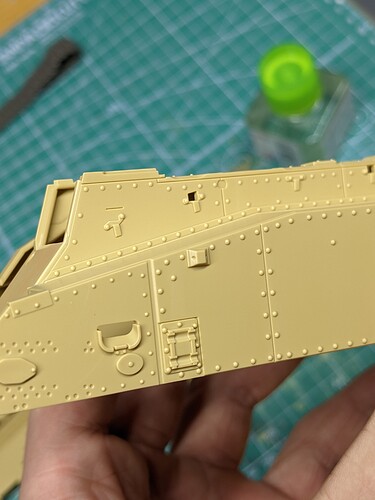 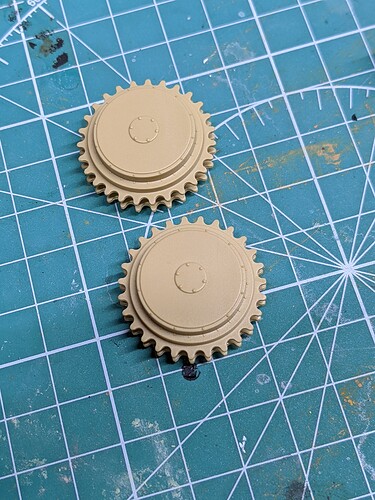 The kit, especially for a 2006 mould, has very nice detail. I especially like the way they have actually moulded the bolts as hexagonal, and not just little dots. These will be fun to weather! However, the cast texture on the kit falls short. It looks like they tried to mould it on, but not to much success. The good part of this, though, is that I get to play around with Mr. Surfacer 500! So that’s actually a plus.

Anyways, I’m liking how things are shaping up for my shrubbery on tracks.

Also seems that my sanding attachments for my Dremel will get use with those fenders.

I would just use a sanding stick and/knife to thin the outside edges (front and back). It will help sell the thinner aspect without sanding the whole fender.

You’ve said you were going for a OOB built, but anyway here are some (easy) tweaks for the Tamiya kit :

Cheers! Thanks for sending this great resource.

This is a fantastic kit and looking forward to seeing the build.
I’ve had one in the stash for years and yours might be the incentive I need to build it!

Some more work, all on the hull. 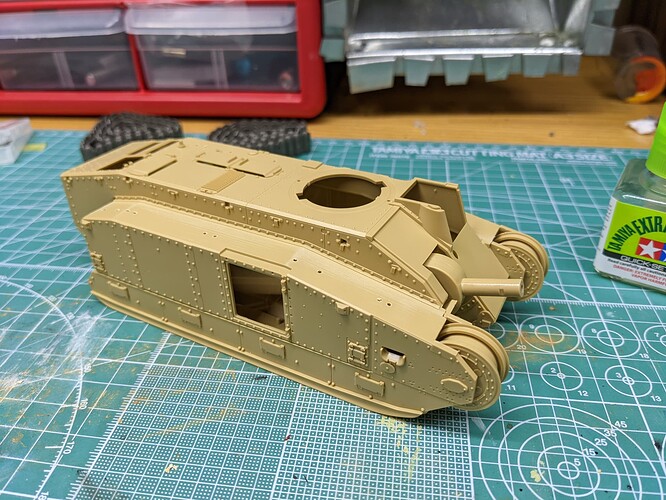 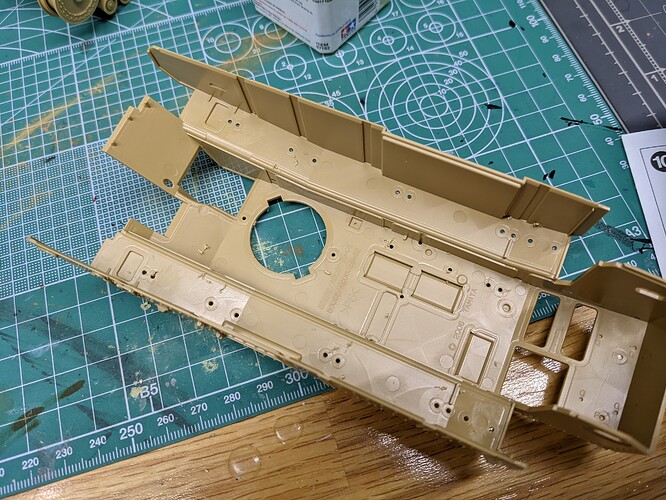 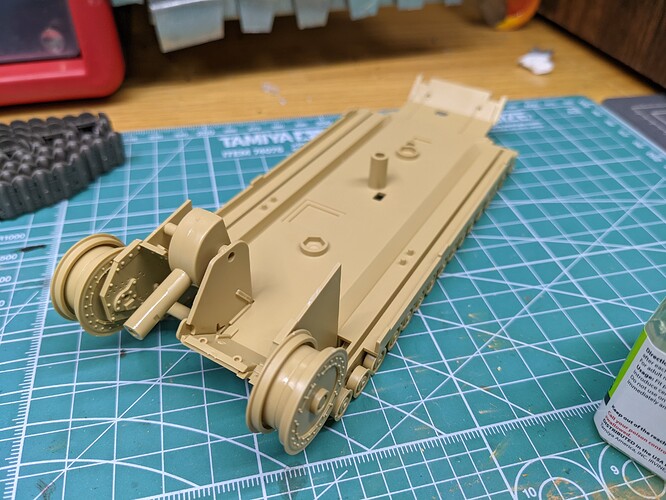 This kit’s moving along nicely.

Bear in mind that the tracks are beautifully engineered, but also really thick. If you have the patience, they benefit from scraping the outer edges to a thinner cross section. Not difficult, but a little tedious.

+1 from me for this kit. It’s not my usual subject, but I just couldn’t resist it when it came out. The tracks are really beautiful, I wish Tamiya could think of a way of using this method on all their tanks. I think they did something similar on the WW1 Mk IV, which I also couldn’t resist. But they are the only two to my knowledge. OOB I had to pace myself to stop it being built in an afternoon - it goes together that well, a masterclass in kit design. Other manufacturers make a lot of slide -moulding etc, but the main hull of this tank is a masterpiece in moulding and detail.

That camouflage scheme reminds me of the fanciful art someone drew of a P.1000 Ratte camouflaged as a brick apartment building. 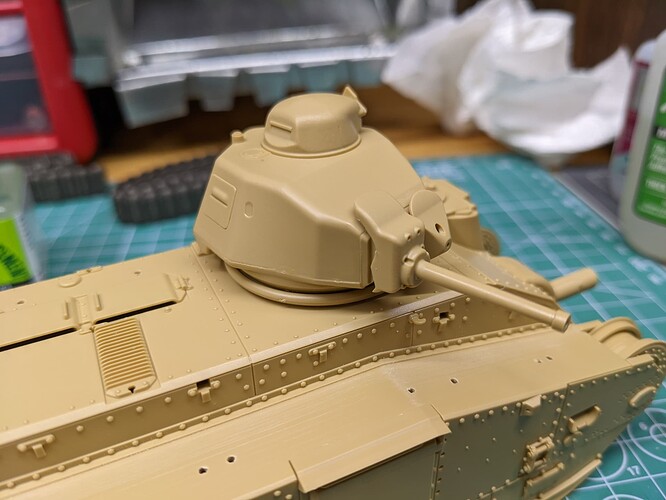 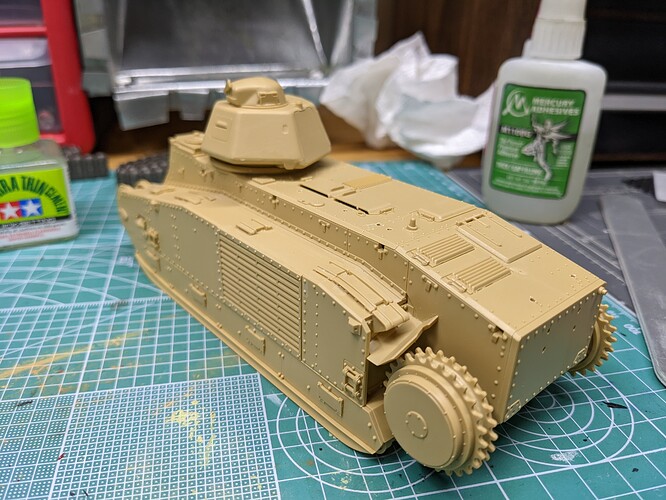 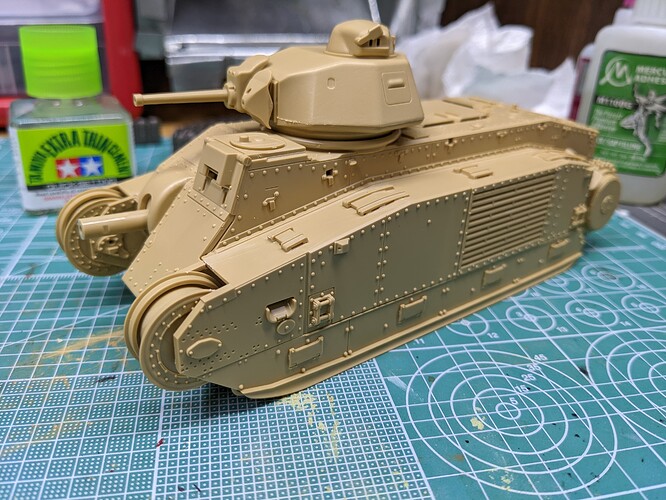 I’ve decided to knock out the turret tonight, as well as sealing up the two halves of the hull. The kit continues to move along at a good pace, mostly because I’m leaving any detail addition I can to the end of the build process.

Yet another delayed update - Calculus II is playing quite roughly with me. Tonight, I basically finished up the last of the construction stage, and soon I’ll be putting my Mr. Surfacer on. 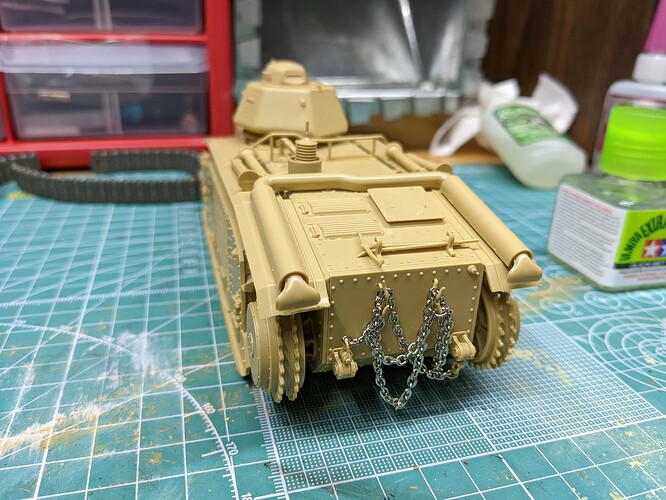 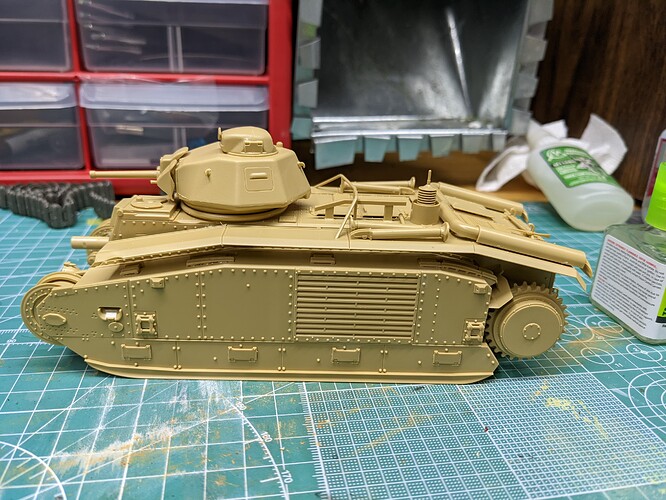 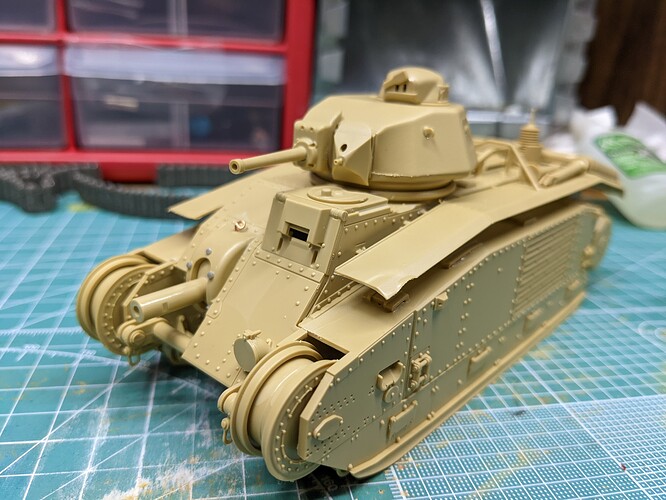