Heres my build log of my 1/35 Tamiya Pz. iii, I was going to build it OOB with only a couple added details until I opened up the box and found a Aber photo etch set for it! (Thanks Wade!) I started the build by adding a sight armor texture to the tank then adding everything on to it. 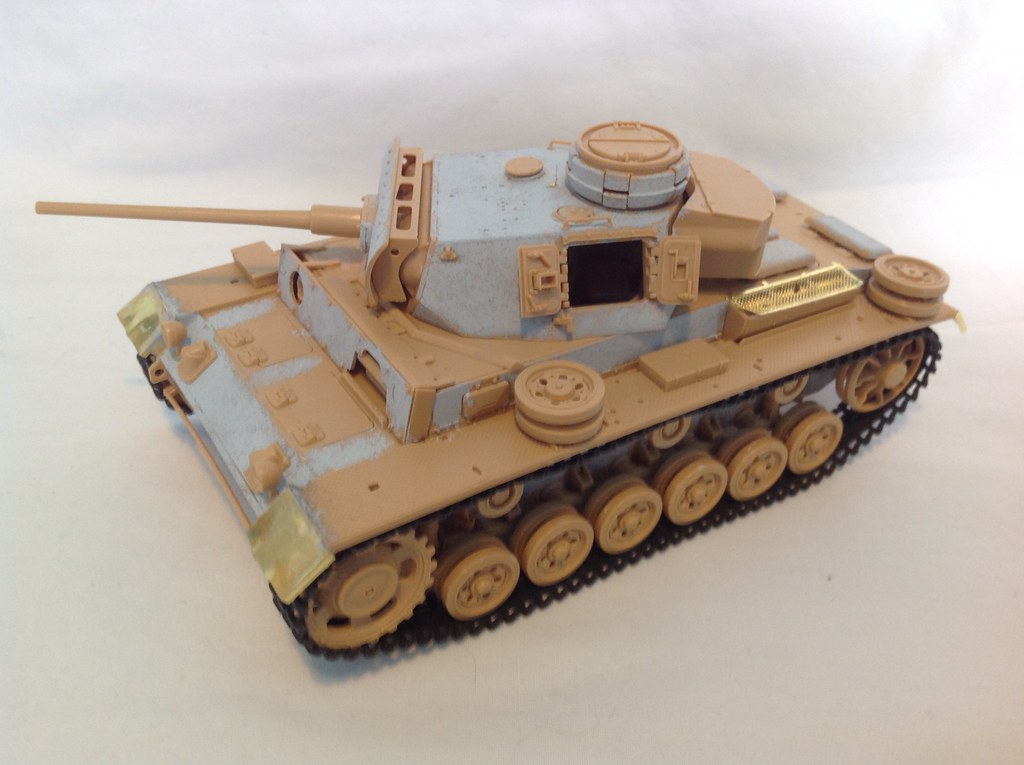 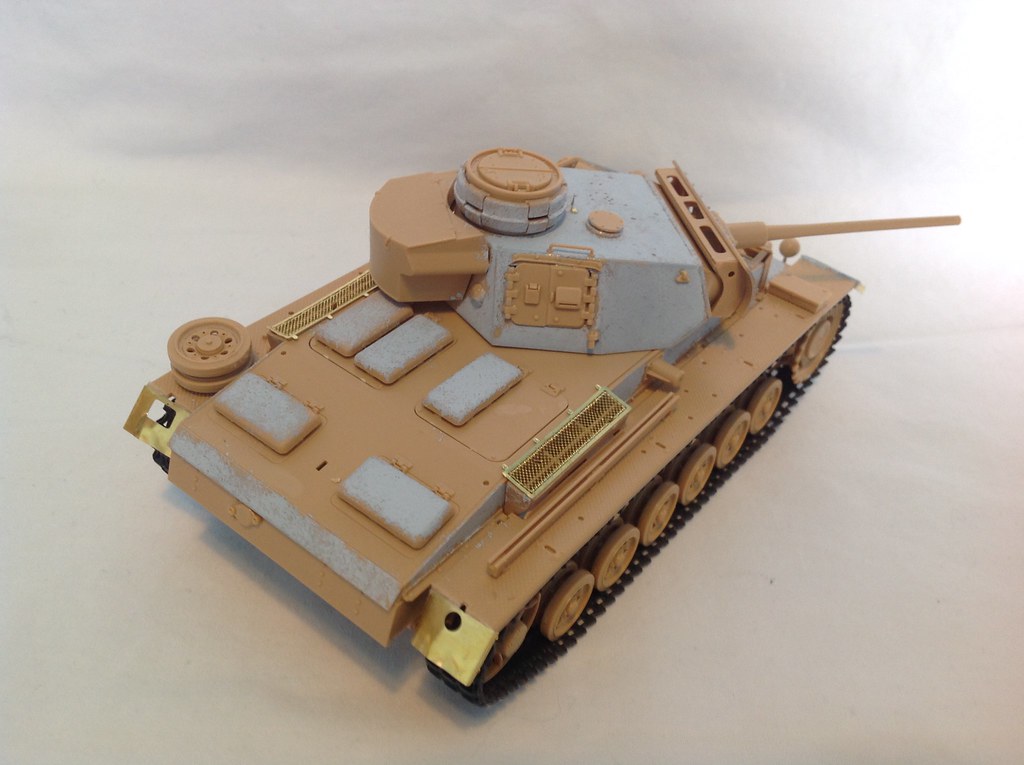 I as per my method, added some sag to the rubber band tracks. (I may add some more) 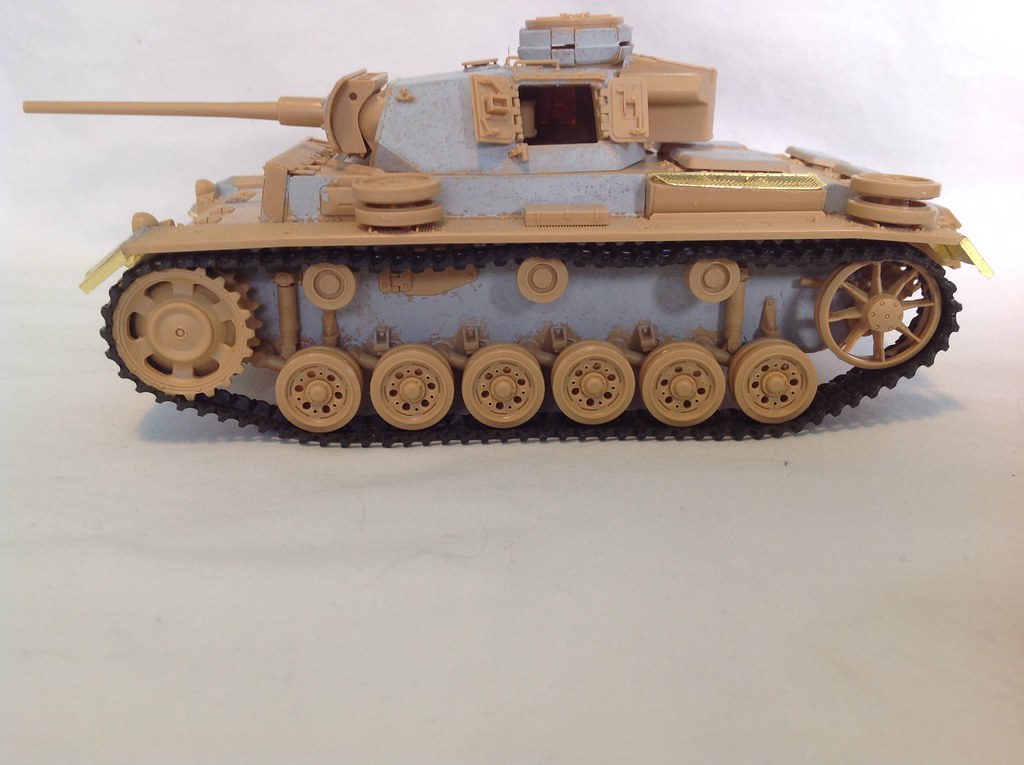 The first PE parts to go on were the Fenders which didnt fit very well as the set is made for the Revell kit, then I added the vane sight on the turret roof and added the grills which I beat up a little.
I still need to add the PE hinges to the fenders so any ideas on how to do that would be appreciated. 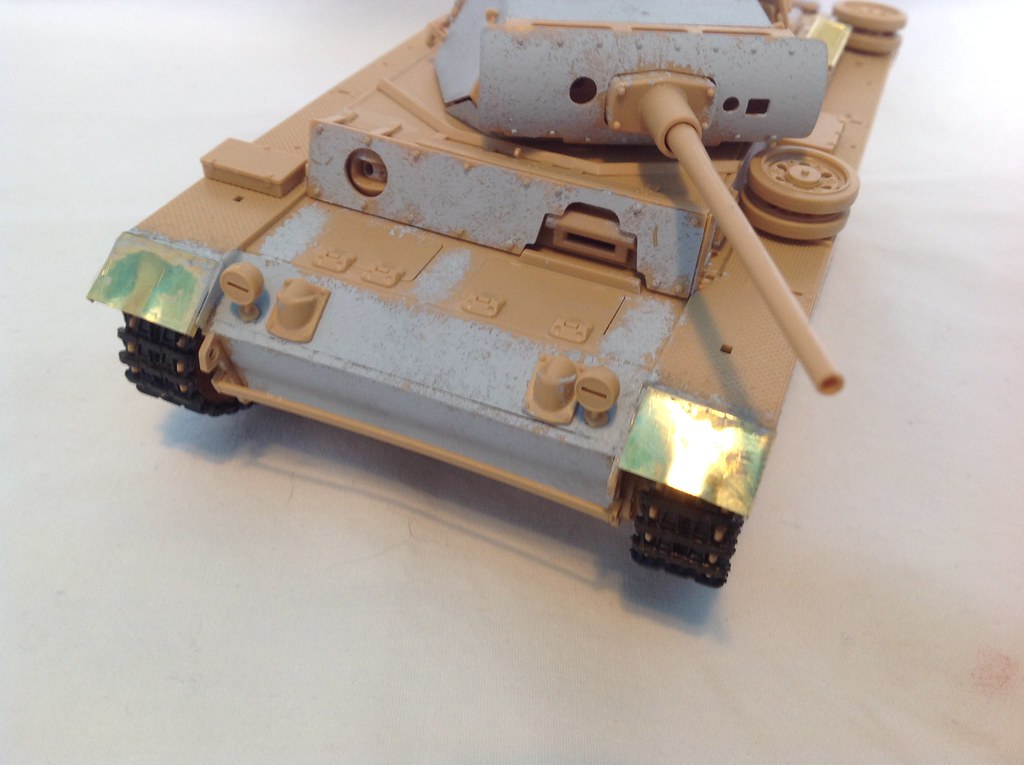 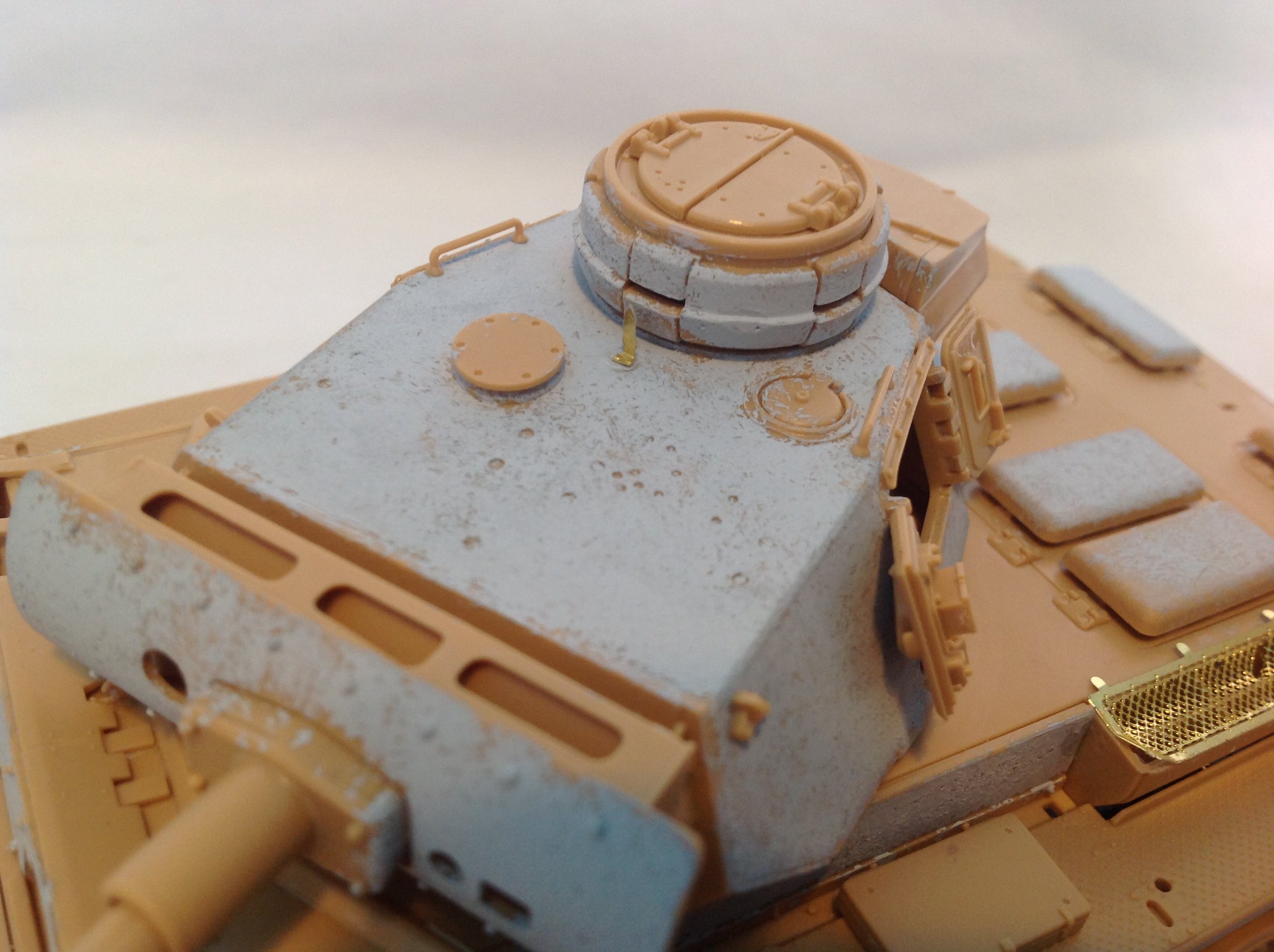 The fenders look good, despite the fiddle factor that goes with them. Likewise the texture is a nice plus.

If that bow MG barrel doesn’t suit let me know, have a spare Aber barrel that should work nicely.

For positioning hinges, I like to use white glue to I can move the part around and line it up. Later a tiny amount of thin CA to fix in place.

I would have never of thought of that.

That’s looking like some excellent work! The armour texture was really well done, you managed to get the detail there without making it look out of scale. Would you reccomend the photoetch set?

Thanks guys!
Dennis, the photo etch set while high quality has really crap instructions, they are really hard to follow. I would recomend it though if you want a highly detailed PE set for this kit.

BTW - for picking up fiddly PE parts, a Rinestone Nail Picker Tool is very useful. They are pretty inexpensive. 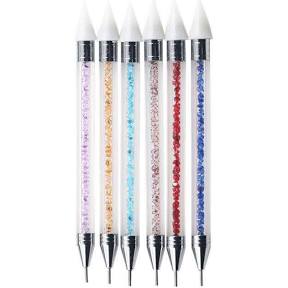 very nice… I am about to start the MiniArt PzIII - love the extra texture you have added, may steal that

Hey guys, I know its been awhile since my last update.
About 5 min ago I was super happy with my progress… until I was walking to take the pictures then the tracks hit a chair and the whole Pz.iii took a large fall to the ground…

I also replaced all the tow cables with wire and used Aber parts. Later I will add some wing nuts.

All I need to fix now is the clamp on the turret bustle, 2 suspension arms, rear light, headlights and the Notek light 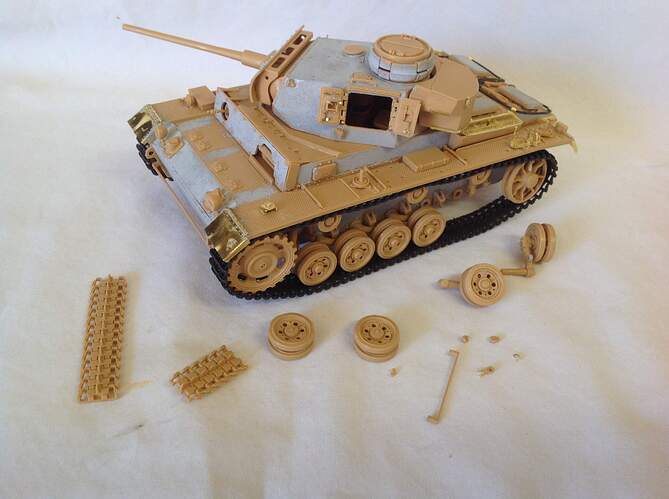 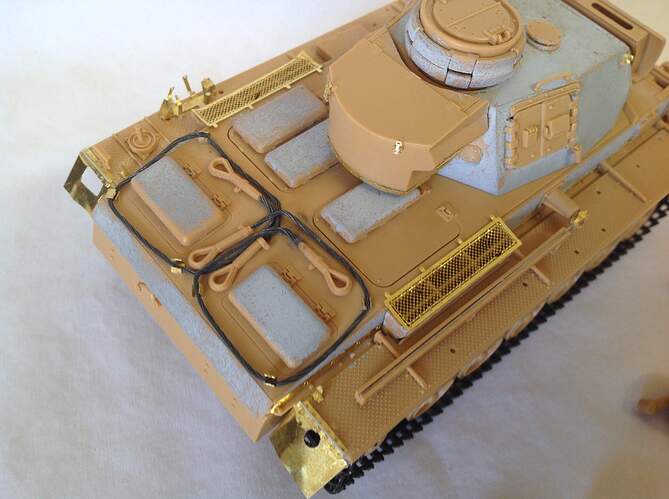 I will probably have another update in a couple weeks as this project is something I just play around with when I get fed up with bigger stuff.

On the bright side now you don’t have to add battle damage? It already has sustained some

Good point!
Now I just need to make a diorama of its humiliating defeat by the now victorious wood floor monster… (The evil carpet monsters henchman)

Haha sounds like a winner. Glad you are able to fix it though. Sucks it happened

You could display it at the point of impact with the small parts flying away attached by small streched clear sprue.

Some more progress.
The majority of the PE, tools and the Magic tracks have been added.
Just a bit more before primer. 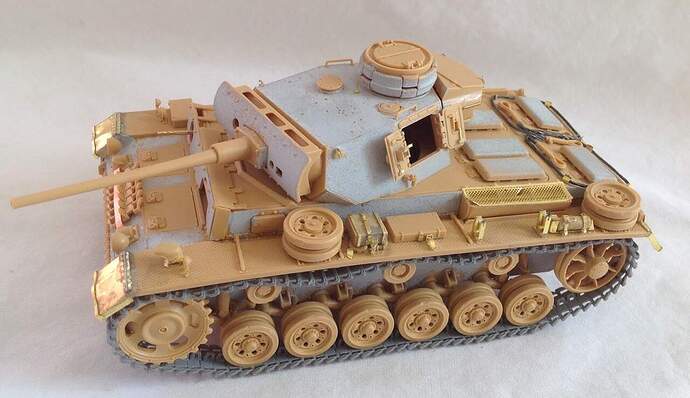 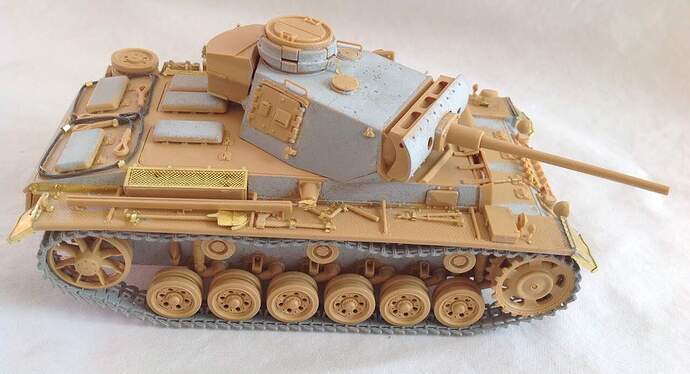 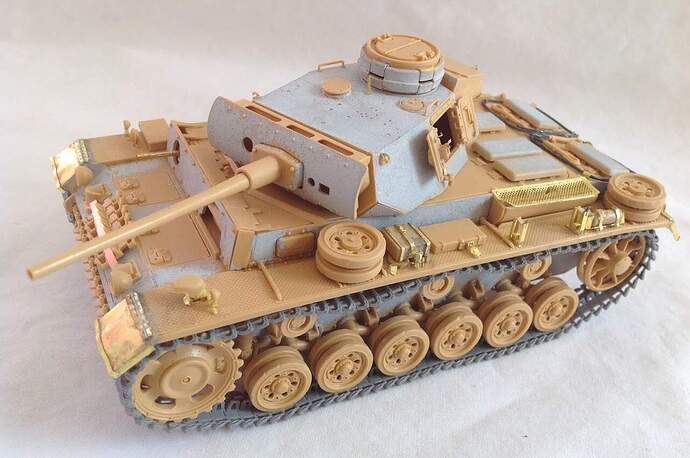 image1280×851 107 KB
I also raided some interior parts from my Tristar Pz. IV that I wont be using. While not 100% accurate it gives the feeling of a interior from someone peering through the hatch. 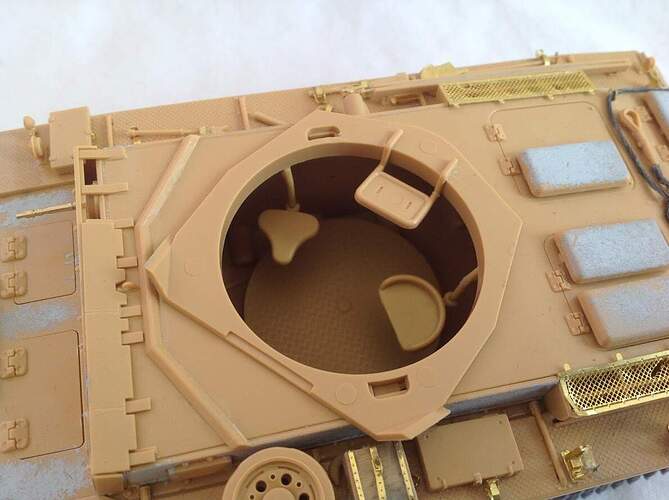 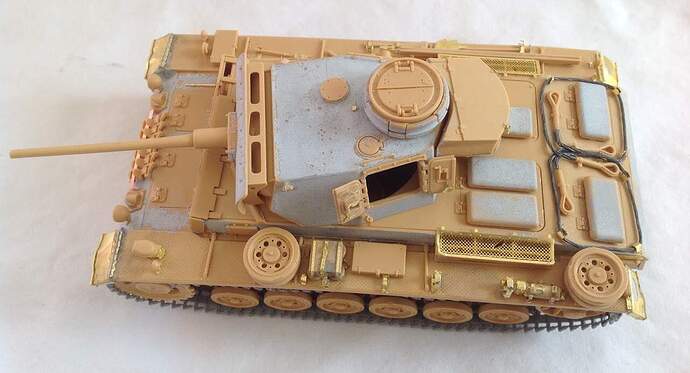 I agree with other comments Ezra, you are off to a flying start and the armour texture looks fabulous.

Here are some pictures of the Dragon Magic tracks tracks. 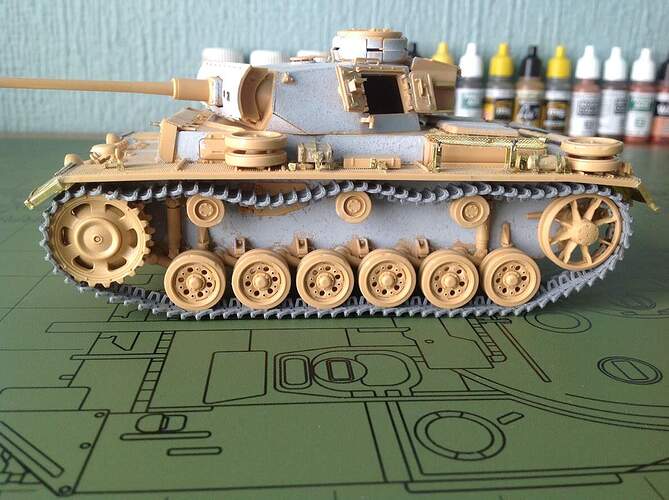 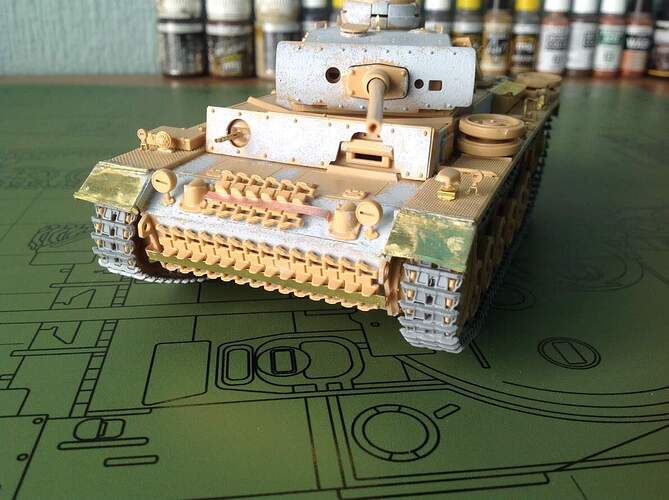 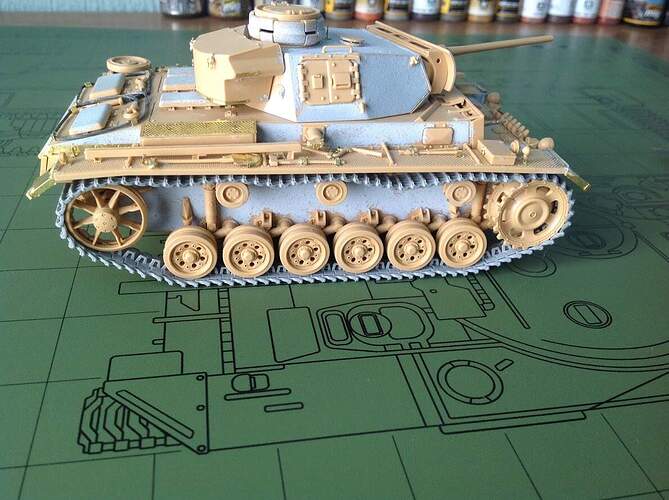 EXCELLENT build, Ezra…anxious to see it painted up!
Cheers,

Thanks Joe!
Im planning on a very weathered eastern front Pz. iii with a white wash.

good suggestion… . I try it!