Been toying with some 1/48 kits. Have a hankerin’ to build a Navy F-104. Only 104A I can find is the OOOOLD Hawk (came out when the 1/1 scale one was just in Kelly Johnson’s mind!) and re issues. Rumor control has Kinetic coming out with one. Shy of the easy kill, how many first borns would it take to back date a Charlie?

Well, Hasegawa does an F-104C which is pretty close and it’s a good kit. There may be some conversions out there to backdate it. It looks like Kinetic has said that they’re also releasing a C some time later this year.

Rumor I heard is Kinetics release is going to be an A/C (with the temps here in triple digits for the next 10 days THAT would be welcome! Our forecast has more Zeros than the IJN.) What are the external differences between A ans C? I know the refueling probe. Wings?

Rumor I heard is Kinetics release is going to be an A/C (with the temps here in triple digits for the next 10 days THAT would be welcome! Our forecast has more Zeros than the IJN.)

Living in NM I can very much relate to this

What part of NM? Got to visit the Chaco Canyon and Santa Fe area a couple times.

Shy of the easy kill, how many first borns would it take to back date a Charlie?

As far as I can find, the only visible difference would be the refueling probe, what was under the wings, and what was on the wingtips. F-104A carried its AIM-9s on the wingtips… The F-104C was created from existing As, 77 were converted. The 104C was a fighter-bomber. Tanks on the tips and a hardpoint under each wing for tanks or ordnance. Pylons under the fuselage for Sidewinders.

There were engine variations between the A and C but unless there are different ducts, ports, and hatches to service them, I don’t think there is a way to visually ID the differences.

XF-104 The XF-104 was the prototype of the Starfighter powered by a General Electric J65 engine. In total two aircraft were build of which the

The early A had a downward firing ejection seat. All C’s had the upward firing type.

Actually, a minor correction but relevant to this discussion: all F-104As and most (if not all) F-104Cs were initially constructed with the downward firing ejection seats (B/C/C-1) The upward firing C-2 seat was retrofitted to all F-104A and F-104C aircraft still in service sometime in the early 60s.

To my knowledge, there are no F-104 kits that supply the downward firing C-1 ejection seat, so to be entirely accurate, one would have to model an F-104 subject from 1962 onward or scratch build the C-1 seat.

So, I think the main thing here is picking a paint/decal scheme that corresponds to an F-104A in the early to mid 1960s.

Visual changes between the A and C: The refueling probe, also wing and centerline hardpoints. These features were all removable though, and from a modeling perspective its as easy as omitting parts from the C kit. As for the cockpit; there are numerous subtle changes to the instrument panel arrangement, but probably not worth worrying about.

I would certainly recommend the Hasegawa kit!

The old Hawk kit was molded with the downward firing seat panel. If one feels so ambitious as to use that kit as a starting point.

Actually, a minor correction but relevant to this discussion: all F-104As and most (if not all) F-104Cs were initially constructed with the downward firing ejection seats (B/C/C-1)

According to Joe Baughers site, all F-104C had the upward firing C-2 seat.

The C-1 seat closely resembles the C-2 seat, so a conversion can be done without too much difficulty.

Well, all I can say is that Joe Baugher didn’t do his homework.

I happened to spend weeks researching this very topic last year and this is what I found.

Below: F-104C (Serial 56-910) at George AFB 1959. You can clearly see the C-1 seat with its distinctive scallop behind the headrest where the canopy seal tube passes. 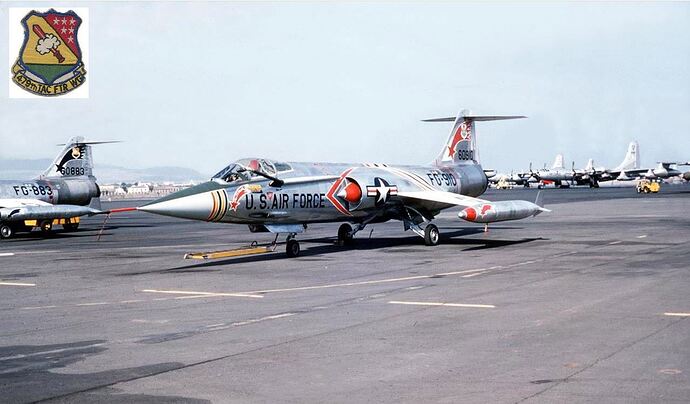 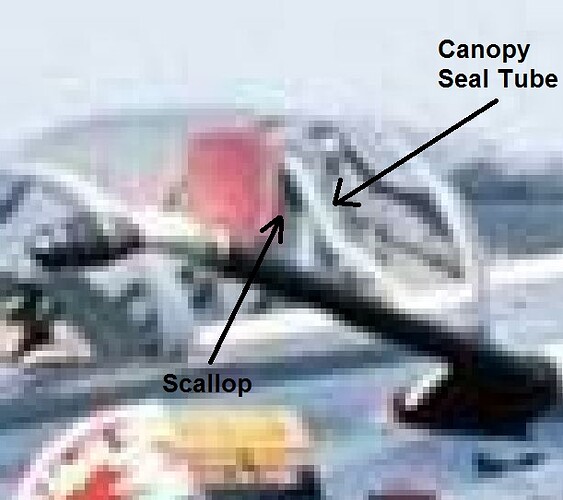 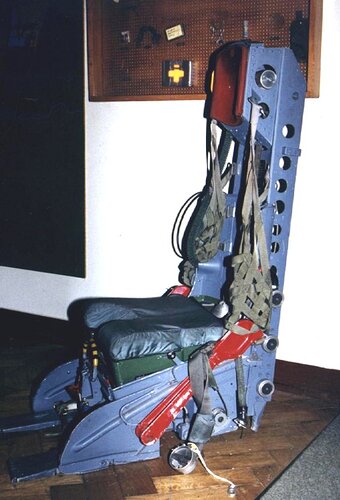 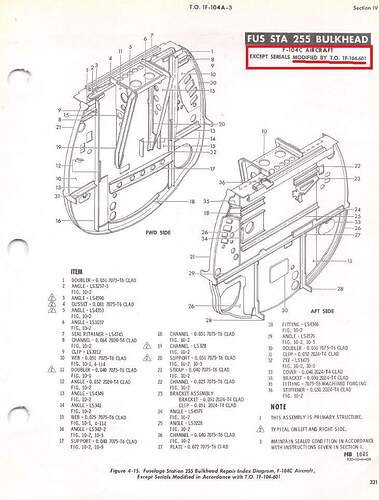 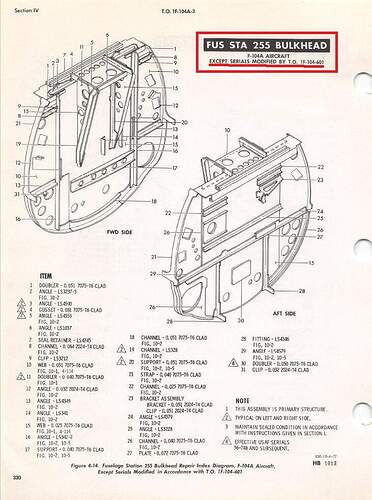 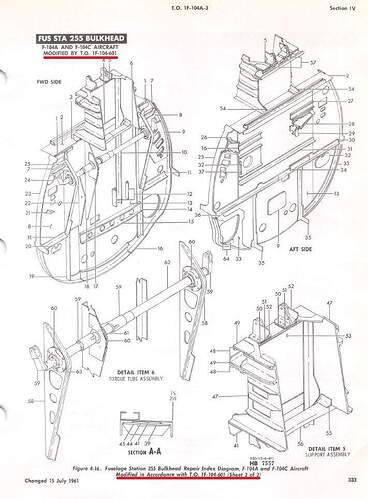 All in service F-104As and F-104Cs were modified by T.O. 1F-104-601 some time after 1959. This modification involved the reconstruction of the FS255 bulkhead and ejection seat rails, oxygen and pressurization systems. This work was done to accommodate the new C-2 upward ejection seat.

I can’t say for certain that there were no F-104Cs delivered from the factory with the C-2 seat, but it is a fact that most were originally built with the C-1 seat.

I hope this clears up any uncertainty on the subject. It’s a bit off topic from the OP but I don’t want people reading this in the future to go off on the wrong track.

I hope I’m not coming across as too much of a stickler, just don’t want anyone else to flounder as I did when confronted with this conundrum.

@Stikpusher Also, you are quite right that the superficial modifications from the C-1 to C-2 seat could be scratch built easily. Main changes are to the top of the seat and the structures behind the seat. It would be cool to see someone make the conversion in the future

P.S. Most of the F-104 kits on the market have colorful liverys for F-104Cs that actually date to 1959, when the planes were first delivered. These kits also only come with the C-2 seat. So the result is that people build their model with a paint scheme that doesn’t match the ejection seat and are never any the wiser.

Most builders probably would not mind the slight historical error, but some out there have spent hundreds of hours on their F-104 builds in 1/48 and 1/32 scale and I reckon that future builders would appreciate the tip off.

Live and learn. Good thing all my USAF F-104 builds or planned builds are 60’s. I won’t have to worry about the seats, even for my planned A.

Great bit of information Marty, and important to know as the bang seat is a obvious focal point . Thanks
tim

Narrative:
Engine power loss during take off from George AFB, pilot U.S. Marine Corp Capt. David L. Hess, leave the aircraft safe but he was sprayed by JP4 and the aircraft exploded and crashed on the north boundery. Pilot killed.) Seat info may have been more detailed than I needed, but (A) all exchange of info is good, and (B) somebody else reading this might find it invaluable. Thanks for sharing.

More tangental info: F-104s were NOT nice to USMC aviators (notice I did not say “pilot”. Like their naval brethren a “pilot” is what guides a boat into port). 56-0740 also was involved in a fatal crash , killing the Flying Leatherneck. ( 56-0740 F-104A 22 Sep 1960
USMC Capt. Howard O. Casada Jr. lost his life when his Starfighter crashed near the junction of Mt. Wilson and Palmdale Roads in the Angeles Natl. Forest during a routine Sidewinder test flight. The cause of the crash was thought to be oxygen depletion at altitude.) The 3d musketeer fared no better. 55-2956 (a YF-104 updated to production) crashed during take off on 15 June, 1959.Naval Aviator, Cdr Herk Camp , survived. A/C was totaled 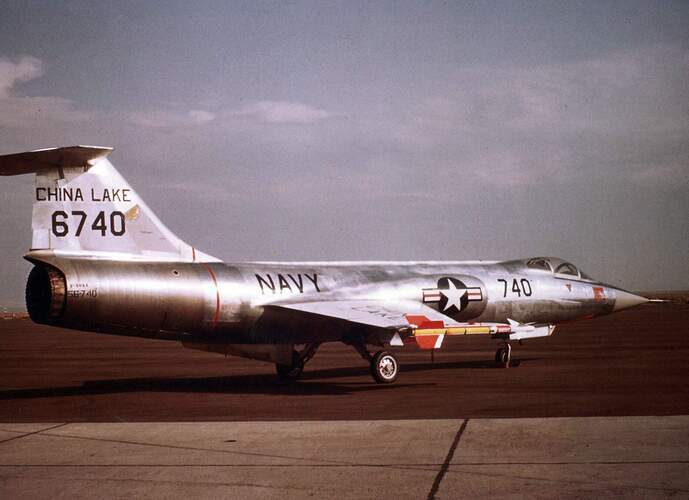 Major blow to my plan. UTL Victory Models 48005 decal set is waaay out of production. Anybody have the set and are willing to part with the parts for 757 (and ejection stencils)??? (also a couple AIM-9Bs… thought I had a couple but are committed to an F9F.)

I can help you out w/the markings for the aircraft but not the ejection stencils.