There’s a new girl on the bench: 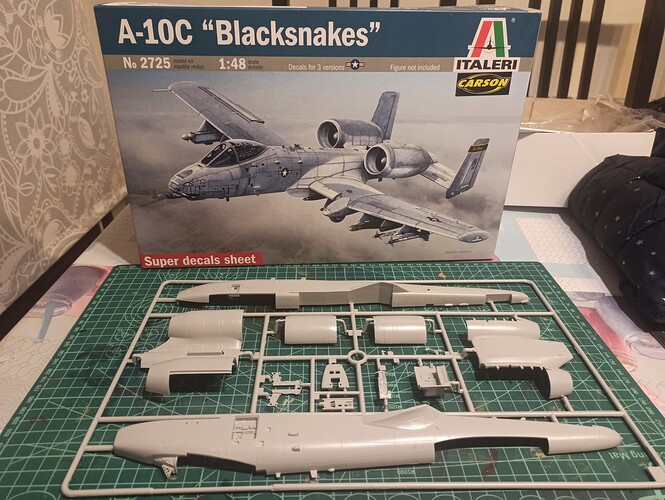 I have left aside the Ducati Panigale I was working on and I decided to get this beauty. She has a very nice detailing, with the panel lines very well defined and full of rivets. It’s going to be funny for panelling. 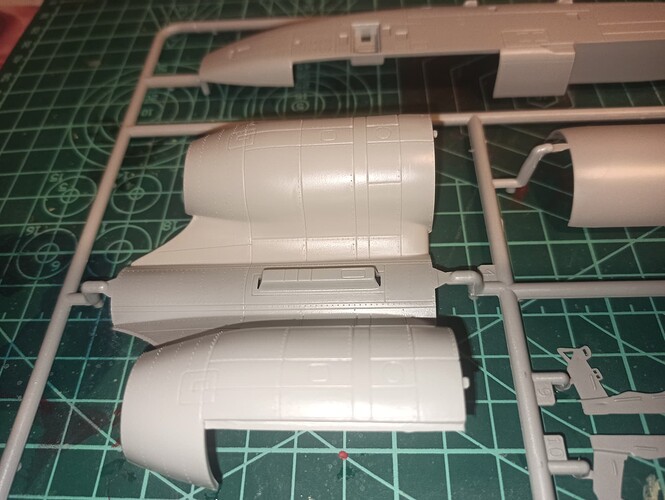 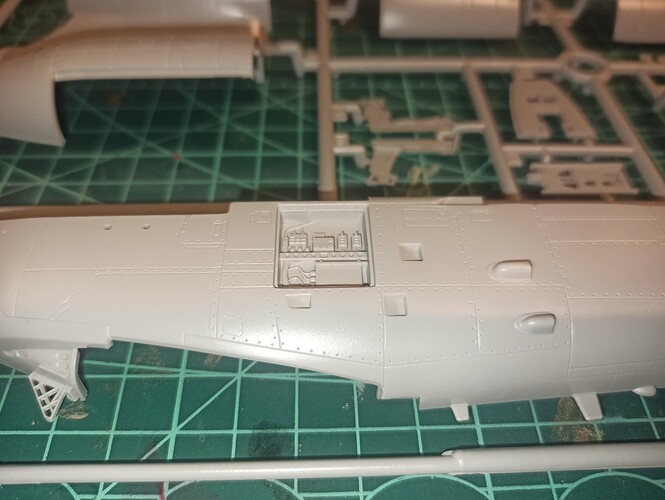 She also have some noce details like the electronics and ladder bays. But I’ll leave them closed as I’m going to make a departing plane. 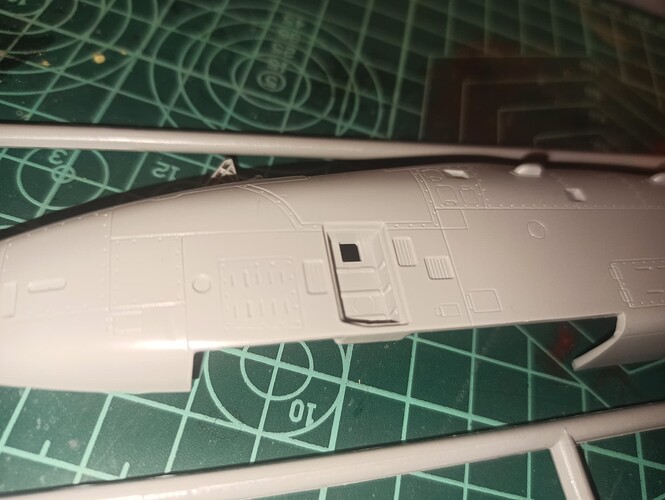 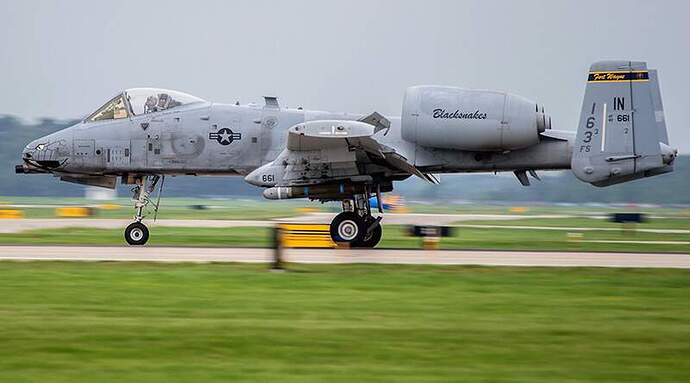 So, after this brief introduction, I began with her. First, even before removing any piece from the sprues, I got the sandpaper to remove this panelling in the cockpit and glue the PE parts as directed in the Eduard instructions. 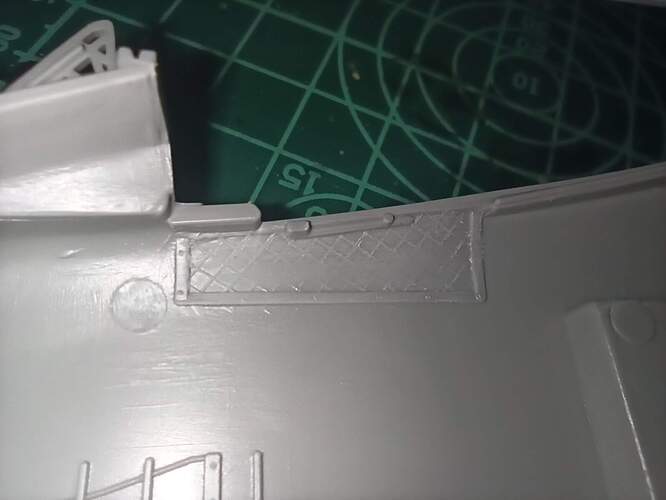 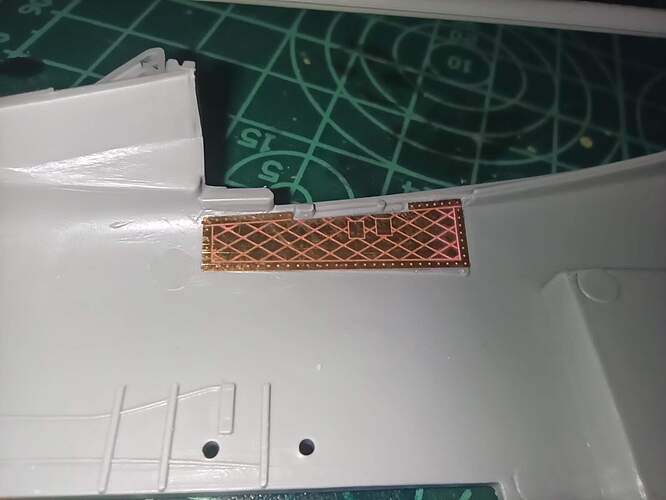 And still in the sprue, I had to remove the HUD to apply the PE one. It looks too thick IMO, so the PE would be a better option. 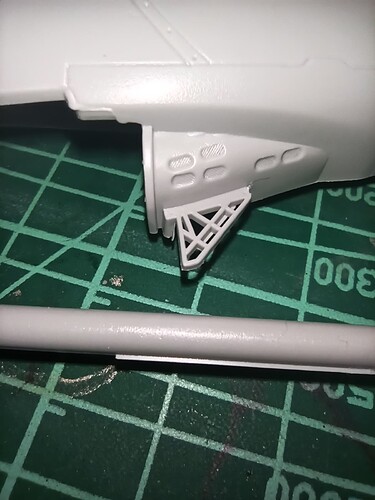 That’s all I could make yesterday. I hope to paint the cabin (I have to make my own mix to get the color, Light Gull grey) and close the frame during the weekend.

I thought most modern cockpits are black for NVG use, do you have different information for this bird?

No, I haven’t. In fact Iwas looking for some pics yesterday but with the mobile. I just could read at ARC forums that is Gull grey, but no pictures to check it. I’ll search a bit more before painting the cockpit.

Thanks for the appointment, Ryan 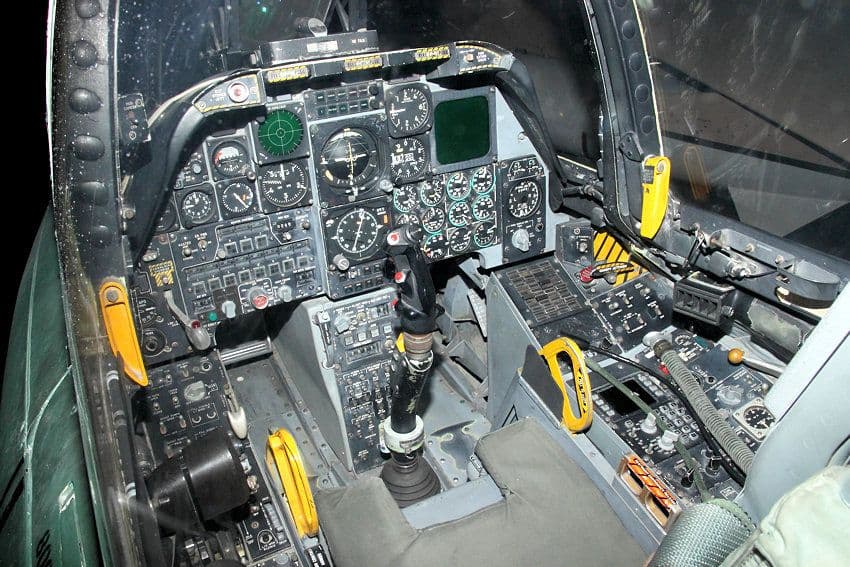 Even in the newest versions: 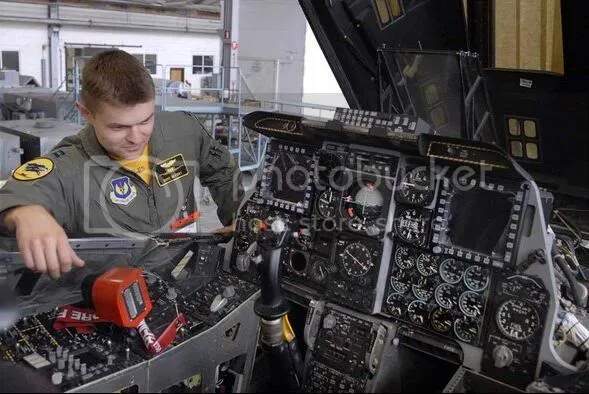 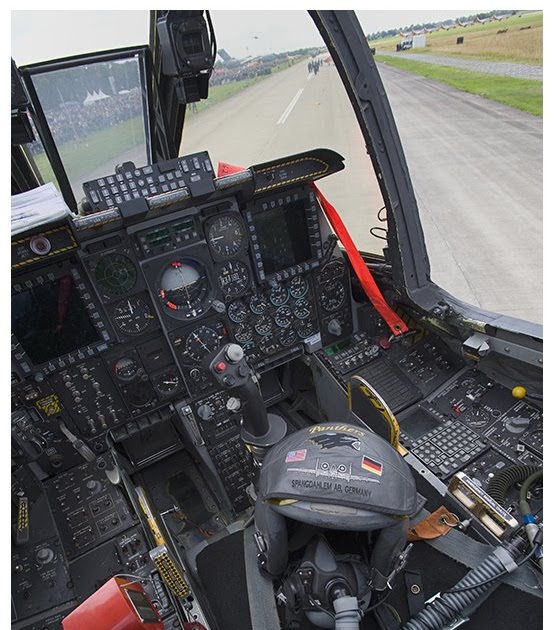 A-10C cockpit shots are wanted - Kind feedback from the Netherlands

Today, from Ton Smolders, a professional photographer from the Netherlands, I've got his kind permission to upload his following outstanding...

I may still have the Reid Air A-10 book around here some place. I will look this weekend for it.

I looked in Reid Air A-10 Modern Hog 2nd Edition and every cockpit shot they show is a grey pit.

Well there you go….going back to the shadows again.

Nah. Stay topside! The cockpits are all grey in the book, but with the shadows on some they look pretty dark.

I will still be following just not commenting as much on this one as my perspective appears to be off and don’t want to give bad information.

Ryan, any info is always welcome. You made me look for the info, so as I say, it’s good for the hobby.

when they were based in my home state, I’ve seen them in the light grey, a darker grey, and even a lizard green flying near me at the firing range they used. Those guys really get down on the deck when they fire that cannon.
gary

2 hours dealing with photo etched parts. Now I got a headache. 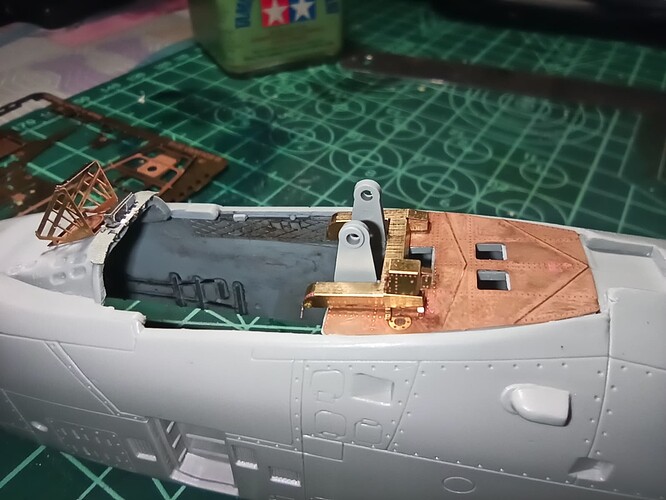 I applied yesterday some weathering in the interior panel, despite I guess it won’t be visible once the seat would be on its place. 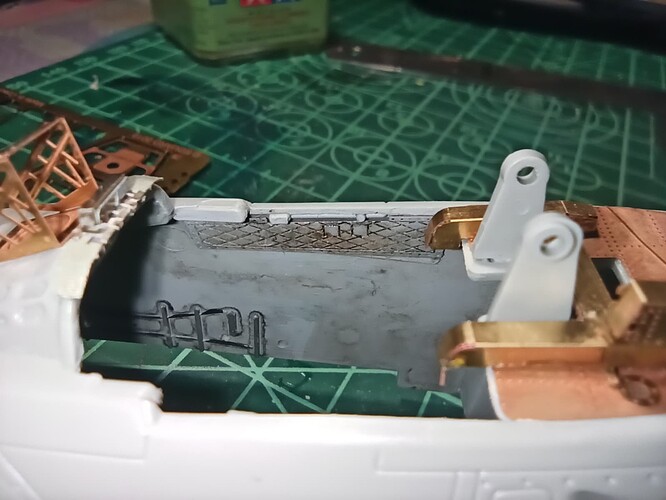 After primming, I paint all the PE parts with Fs36320 as directed in the instructions.

And this is enough for today.

Will be following, looks very good so far 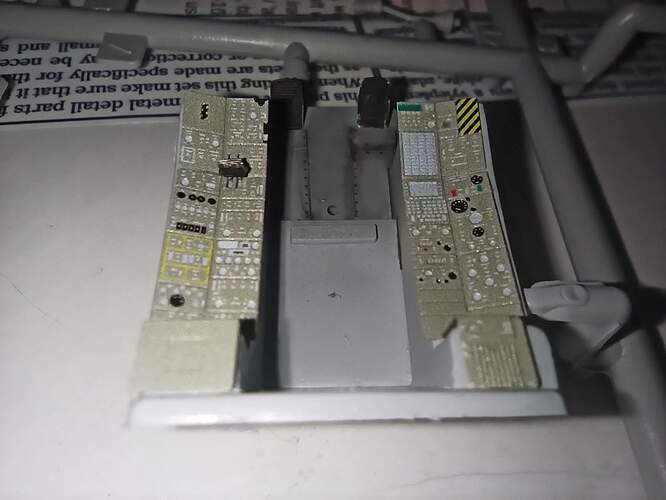 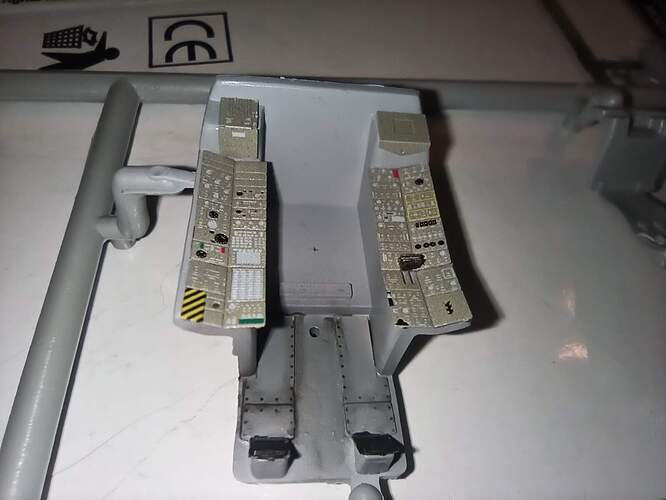 Not so much for the weekend, but I had no more time for modelling.

Now I’m looking for some info for the aircraft. As I want to make the plane rolling to runway, I’d like to know if anyone know what is the takeoff config. I mean, what flaps and slats setup. I’ve been searching the web, but I only find DCS videos and tutorials. It could be reliable, but I’m not sure 100%

On the other hand, I have finally bought this pilot: 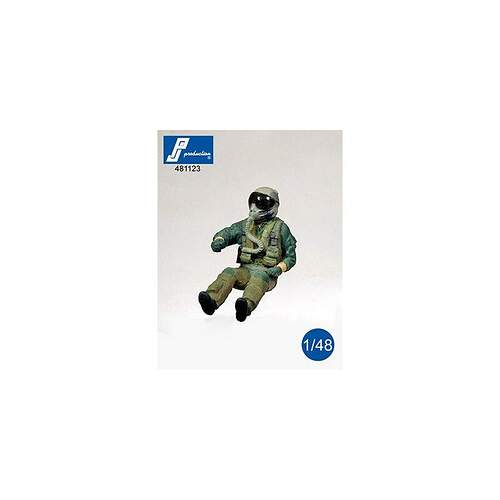 It looks quite easy to modify the pose and make him saluting.

Thanks for any info available.

Finally, a subject I have some personal experience with. I worked the first flight of 122nd A-10s into Fort Wayne in 2010, and 10 years ago this Friday, got to “fly” their simulator. Unfortunately, I don’t think I have a single photo of their A-10s or F-16s - sorry.

They might even provide information about cockpit colors, take-off flap and slat settings, etc.

Thanks for the link to DVIDs. I already knew that web, but never looked for info about A-10. I will take a look deeply.

The 100th Anniversary livery looks pretty cool. I think I have seen the decals in the Two Bobs’ webpage, but I’m going with the two greys scheme. This is the refpic I’m going with 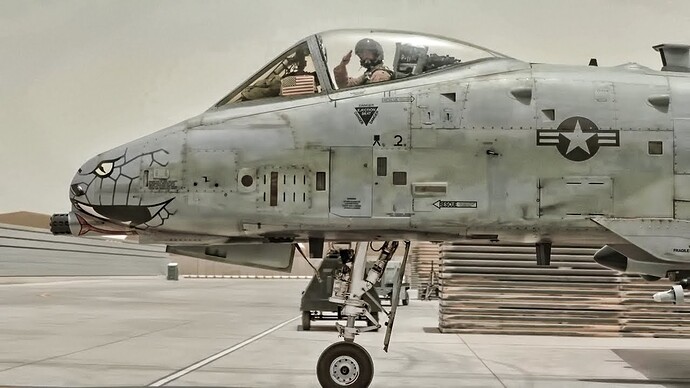 It’s going to be hard to find some detailed pictures in the web. I was looking for the Reid Air book, but it’s too expensive to buy from Spain. 35$+shipping+custom taxes. So it’d be around 70/80$.

You may have already seen this sites but they seem like a nice detail build of the kit you could use instead of the book. 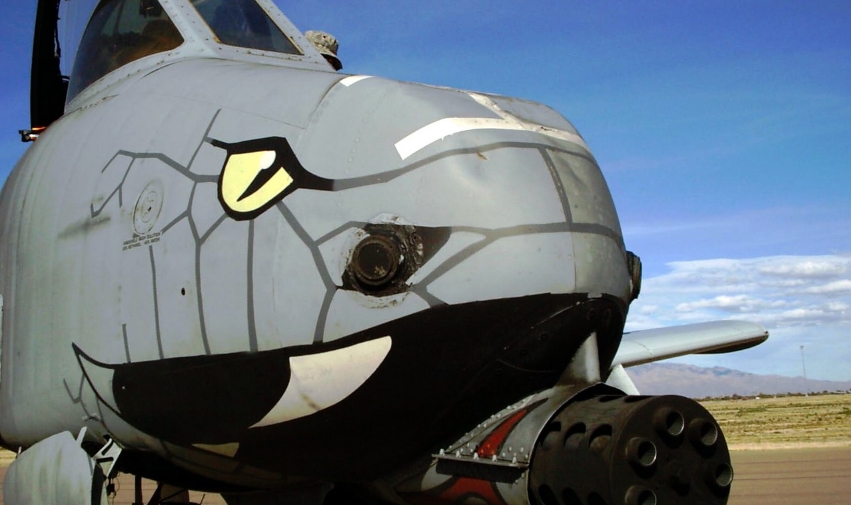 For quite some time I wanted to built a model of the now classic close air support aircraft (EAY – CAS) of the USAF and my favorite (with a lot of “flight hours” in the well known DCS flight simulator), but the models on the market depict the “A”...

Nope, I haven’t seen any of these builds. Thanks a lot!!!

The first one is very helpful. The HOTAS mod liked me a lot, so I’m going to try it.

Thanks again for those 2 links, Ryan!

No problem glad to bring something new. The second one while more in a maintenance scene than your rolling scene had vent opens etc that might be helpful to address for your build.

That’s why you mustn’t be in the shadows