I was given this kit as a present and thought it would be fun to share the process of building it. It might inspire someone new to the hobby or maybe even a veteran within it. 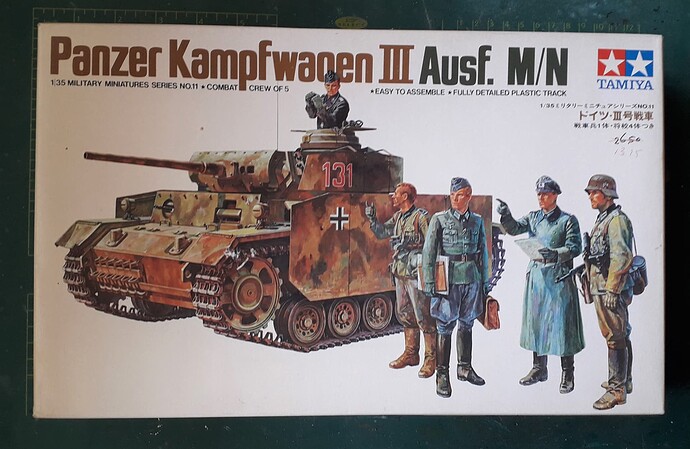 And yes, the sprues indeed say 1971, even though mine might be from a later batch, since there is quite a bit of flash, indicating well used molds. The vinyl tracks are badly deformed and twisted, so I hope to be able to remedy that later on. 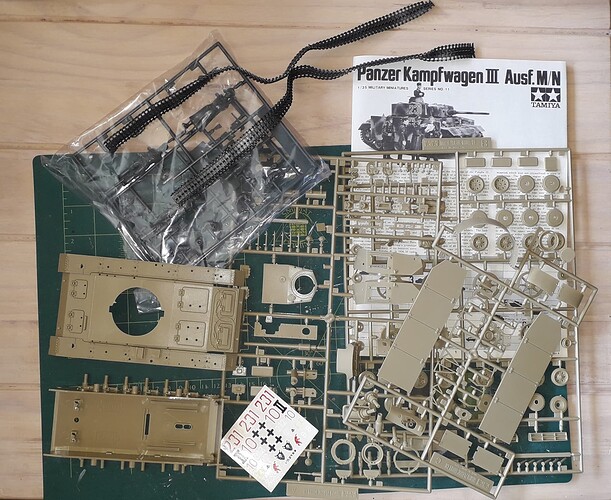 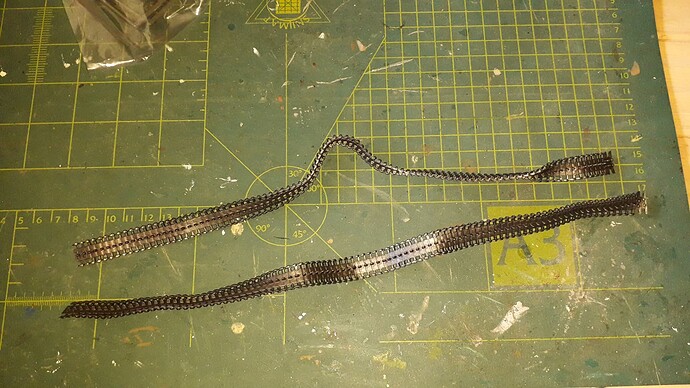 I am not quite sure whether I will depict it as seen during Operation Zitadelle, Kursk 1943 or as a Norwegian Stridsvogn KW-III, being taken over by the Norwegian military, after the German surrender, somewhere between 1946 and 1953.

First impressions; for its age, it certainly is not bad. not bad at all!
Additional armorplating appears very thick. i think it needs replacing.
The barrel, allthough in one piece is solid, so it needs hollowing out.
The cast on towing cable looks horrible. A new one is needed.

What i did so far;
the usual Tamiya holes needed filling and I drilled out the holes in the wheels. On one occassion this went wrong, because the drill skipped and bit in the wrong spot. Some more filling seems to be necessary. 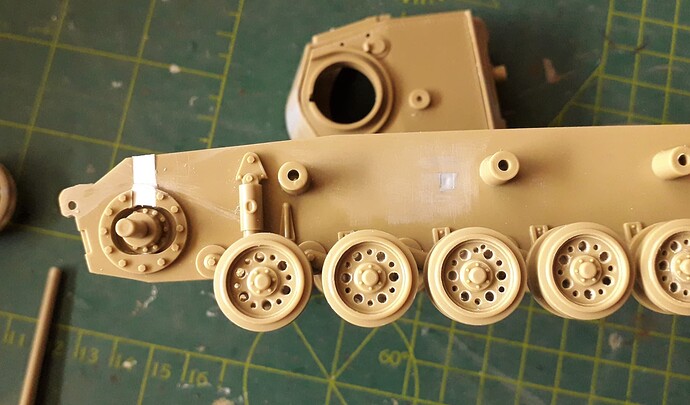 Sometimes the fit is not that great; 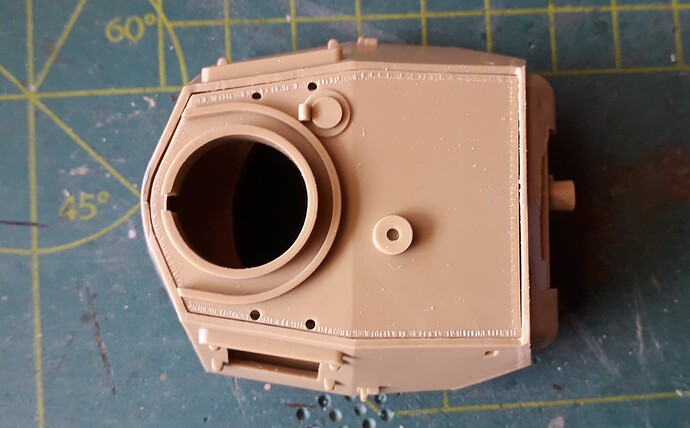 Barrel sanded and hollowed out: 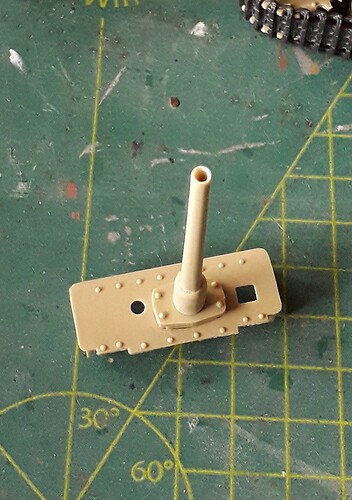 Tracks are temporarily in place and I hope the worst of the deformation will easy out. When turning the wheels, much of it does indeed level out. 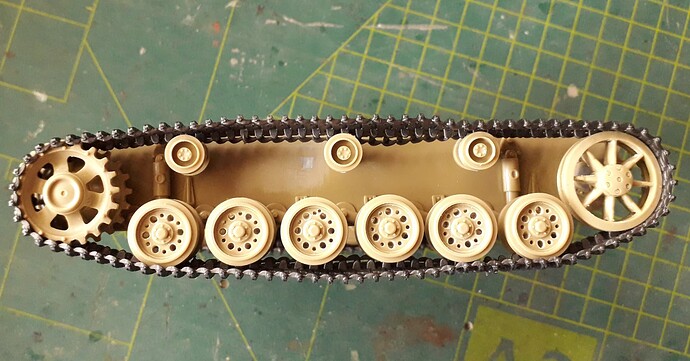 Looking good, i like seeing what people do with these old Tamiya kits. They can build up really nice with the care you are displaying

You’re gonna enjoy this. It’s a fun old kit, with many shortcomings typical of its’ era. But it looks like a Mk.III when completed, and will look fine on a shelf with a little extra help here and there.

So glad to see you tackling a older kit . These classics are fun and can be turned into a masterpiece , as I am sure you will do … Keep sharing progress

Yeah I remember building this kit when I was a kid. I loved it. Still looks pretty good despite its age. Good start Ron!

I’m wondering if gently heating those tracks with a hair dryer would enable you to straighten them out.

Or a bath in hot water.

Just finished one of these earlier this year. It is decent, my tracks were not in tough shape. I thought the biggest deficit was the figures which seem so grossly oversized. Have fun. It would be a nice kit for someone new to the hobby I think.
DAKjunkie

I built one of these as a kid, motorized version. Loved it! It should work well for you. As pointed out above, a little heat will help with the tracks, or if you want you can go with some after market ones.
Ken

I tried that once. Ended in disaster.

It would be a perfect kit to get people into the hobby… and stay there!
Good (enough) fit, not overly (ridiculously) complicated and cheap to get.

After market would defy the purpose of this build and write up.
I am hoping it will reach some newcomer and they will find it helpful.

The old Tamiya kits are like comfort food. You feel all warm and fuzzy putting it together. A nostalgia kit.

I really like these old kits for trying new techniques on. Less pressure messing up a $20 kit

Yep, just throwing out options. The tracks should work out just fine. I always liked Tamiya’s vinyl tracks, way better than others, like Monogram or Nichimo.
Ken

Glorious build thread here. This old kit was one of my first. I love blogs/reviews of the oldies. Very interested to see what you do with her.

Call me crazy, but I’ve always found Tamiya vinyl tracks to come out just fine after some good paint and weathering!

During this during I noticed more and more that Tamiya has omitted quite a lot of very visible details or simple made mistakes. Things like the frontal armor, the chest on the back of the turret or the lids over the air intakes.
Some of these omissions or mistakes are fairly easily corrected. Some not so much … with my skilllevel. 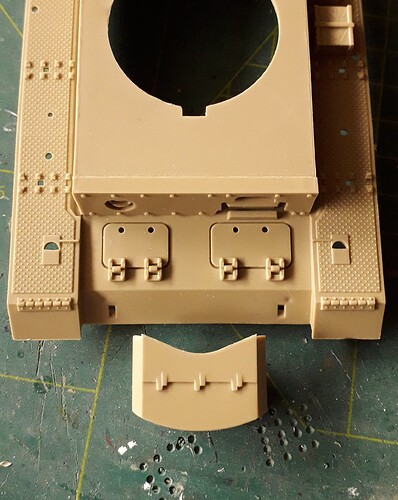 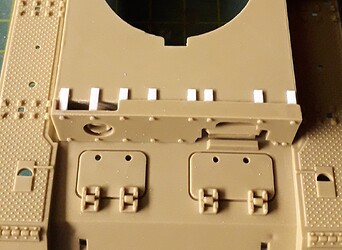 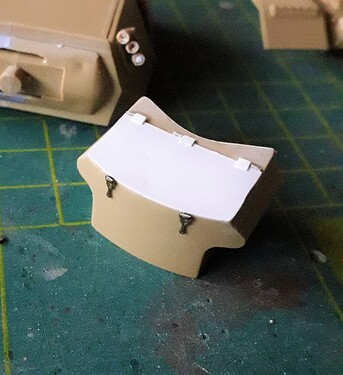 The cast-on towingcable was horrible, but I only had 1 spare: a vinyl one. And that was not behaving the way I wanted it to. So I had to resort to cheating and lots of superglue. 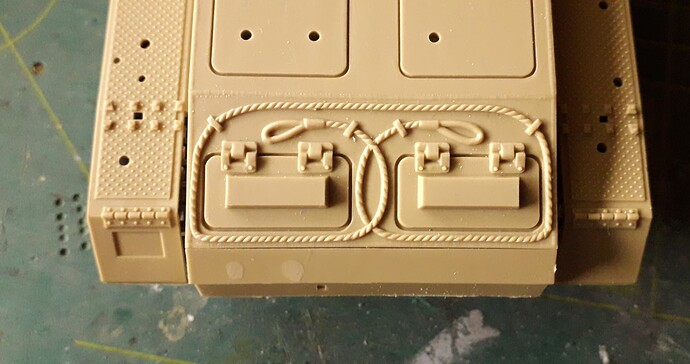 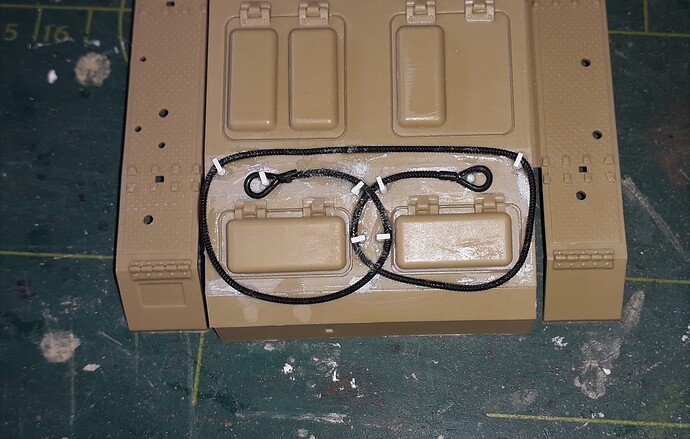 I also created a new commander out of Academy-parts. 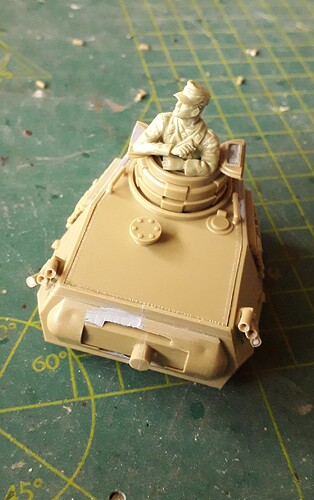 The stuff you have done so far is all game changers and well done.
Keep rolling