A one time frequent customer...dio builder

It’s been a while since I posted a dio build, and have yet to on the new and improved site. I’ve been working on vehicles for some time now, but recently decided that a dio was in order. This build started as a 1/20 scale Penske PC4, which is a racecar.

All was going just fine until, at the very end, a big flake of painted chipped off!! in a very obvious place.

As I went about repairing this, decided instead of fixing it, that it might be better to build a dio, of race cars in a shop! I know, off topic, so I won’t go on and on, but thought you might enjoy seeing some of it: 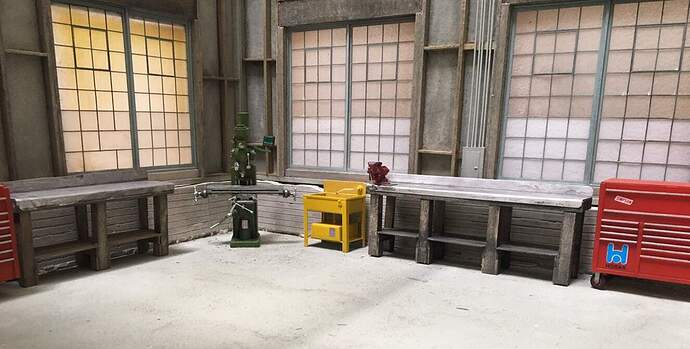 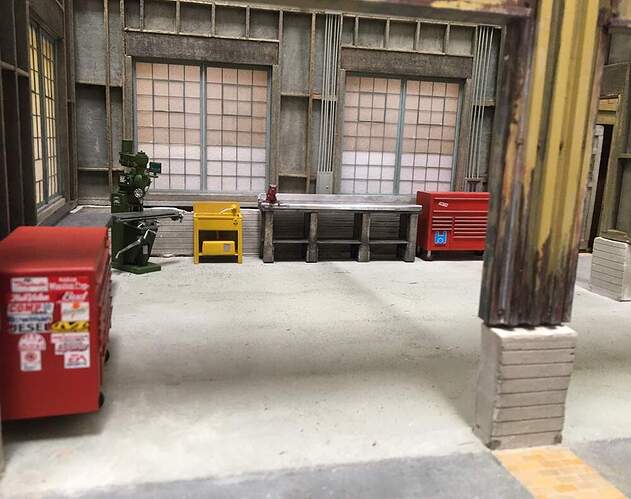 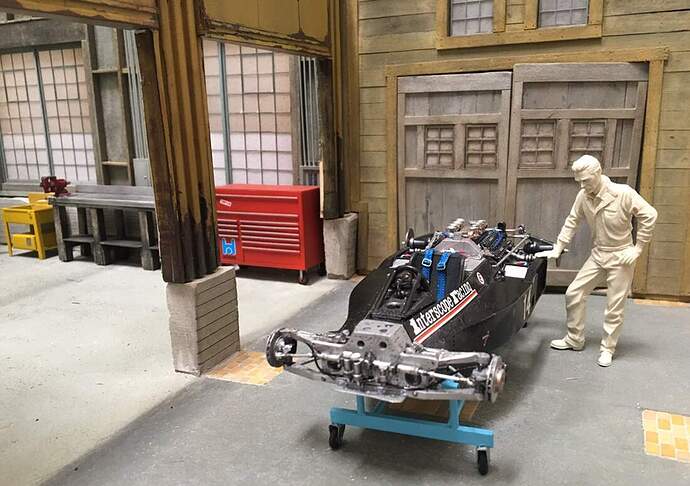 Like a few of my other builds, this one is an old industrial building, repurposed. As it’s sort of an odd scale for dios, I scratch built the mill, tool lockers, and whatnot.

The quality of the few figures I could find is pretty nice - more about Mr Grumpy here later. 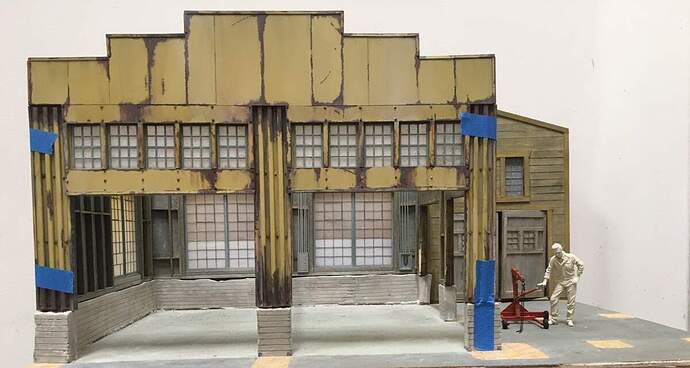 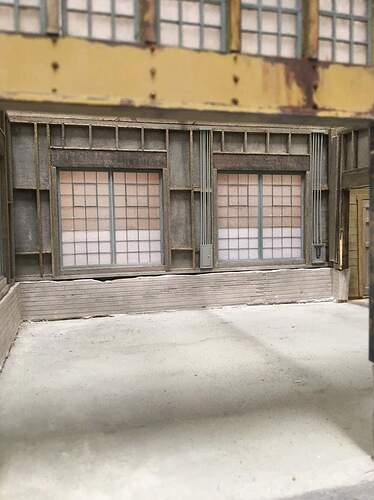 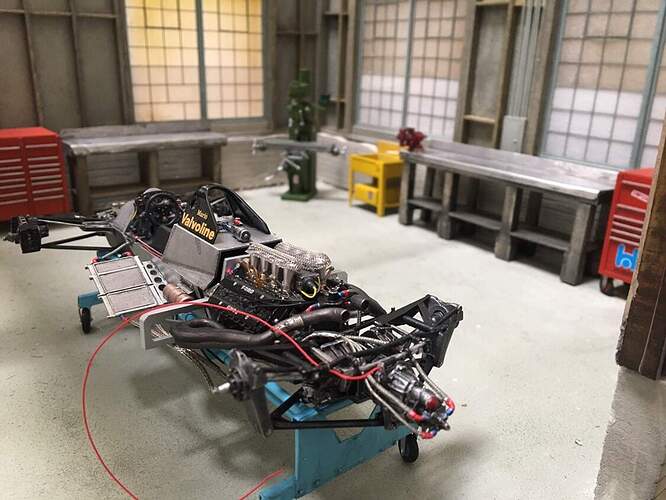 I want the openings to be big enough to see inside, but not so big that they look ridiculous. The windows are left over from other projects - and this is all dry fit, with plenty more to do.

And finally, back to Mr Grumpy - I decided to post this build because I thought about Jerry Rutman and Romain as I went about my business of, well, making him look a bit happier, if not a bit relieved

In addition to having enjoyed their comments, help, and input on several project, I continue to learn a lot from Jerry’s work (yes, I lurk!) and always look back to Romain and his work with fond memory! 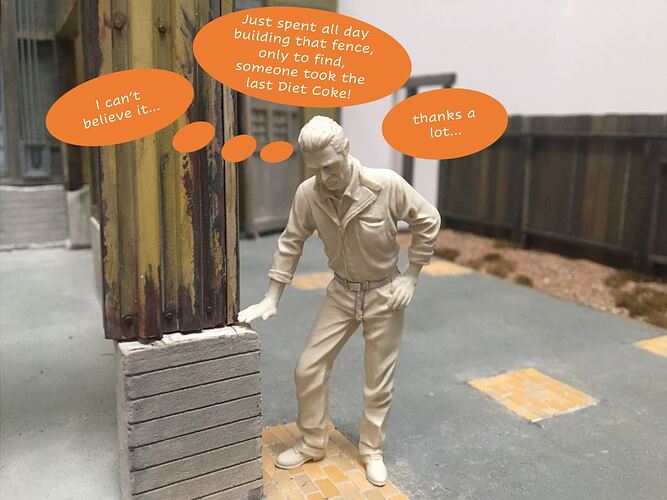 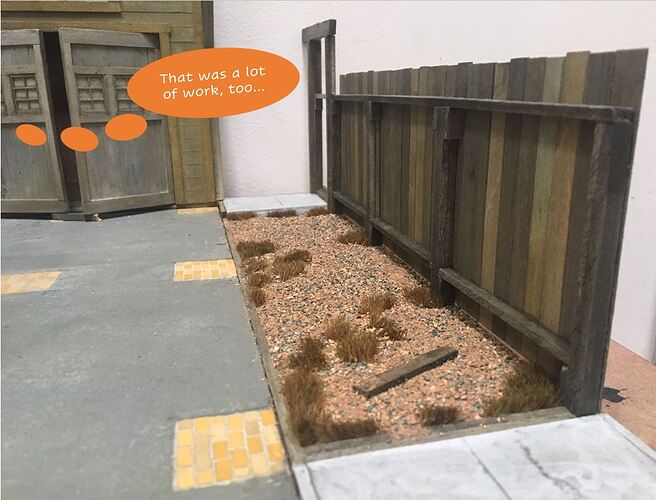 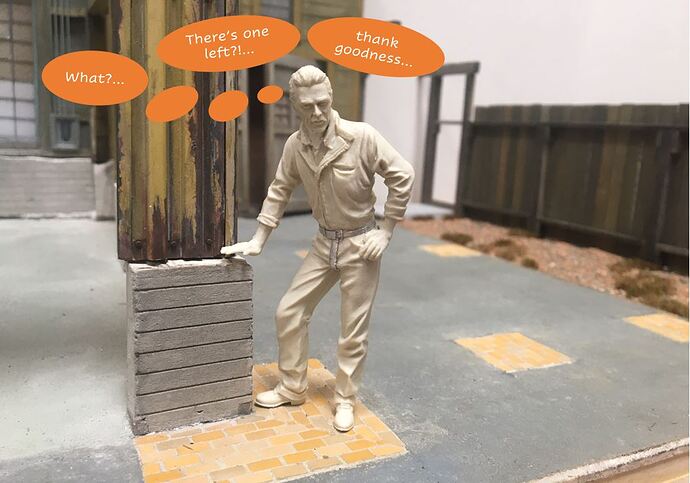 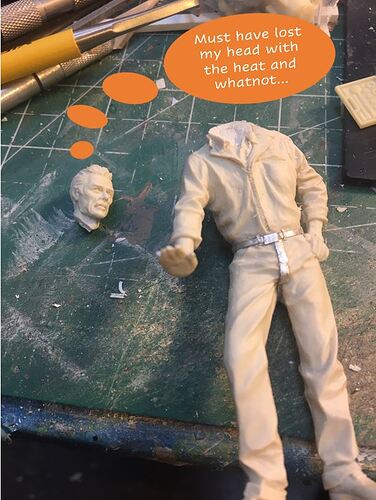 Yes - tips from Jerry and Romain stuck in my mind as I went about cutting the head off of an expensive resin figure, then adapting him to a new, and hopefully convincing “outlook” and of course, the generous use of lead foil (he has pockets in the back, belt loops etc) - the latter being among the top ten best things I’ve learned as a model builder - I use it for everything, which is a direct influence of Jerry.

A few of the other figures received similar “corrective surgeries”. Eventually they’ll get some paint - the really tough part - and yes, I will be trying to remember Jerry and Romain’s suggestions as that begins!

Aaaaahhh run for the hills he’s baa-aack! I was hoping you’d make an appearance eventually and !POW! check it out, new thesaurus ordered. Nick I know I’ve asked this before but forgotten the answer – what happened to the Not-Bladerunner masterpiece? Please show newcomers what’s possible in this art-form with a few images of that before you blow our socks off again with this one?

Yeah, that was a cool one. Very creative.

Hi guys, thanks for putting up with this off-topic dio!

@Petro, thanks - it was fun, but became a task…see below -

@Dioramartin Tim, ha, yes, the dio world is fun, and when you least expect it, a source of inspiration rears its head

I guess I could ask you the same? Is there an end in sight for your master build??

Something I enjoy most about dios is trying to solve problems via scratch work - and I know you are indeed a master of that! But, that also invites them to last as long as you can think of new things to build - haha

As for the Not Bladerunner… it’s collecting dust, and unfinished, but not yet destroyed! About six months ago, I did a big trash run, and at least four dios made their way to the bin. I just ran into a big burn out on the beast - It’s big, awkward, on an unstable base - in other words perfect for eventually finishing!

I’ve been thinking about making it into two dioramas

one with the two big buildings, and another with just the bar - then add something around it? 1/35 is a great dio scale - - hmm.

I hate to seem gratuitous, and don’t mean to be so, but as the origin of the Blade dio started on Armorama, a long time ago (maybe 2014???), and thanks Tim for asking, here are a few pics - starting in the bar: 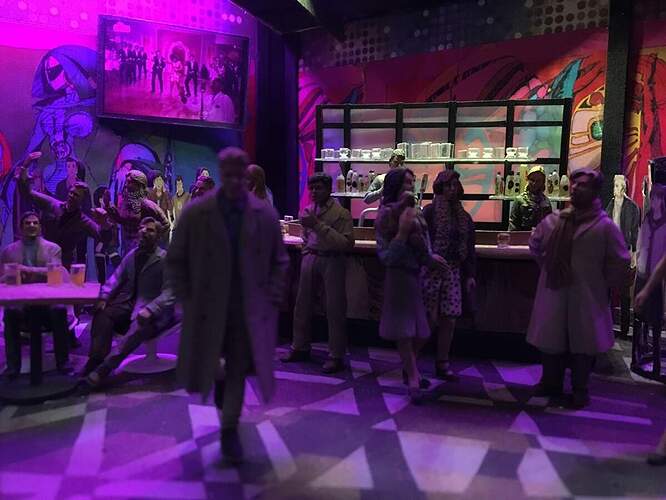 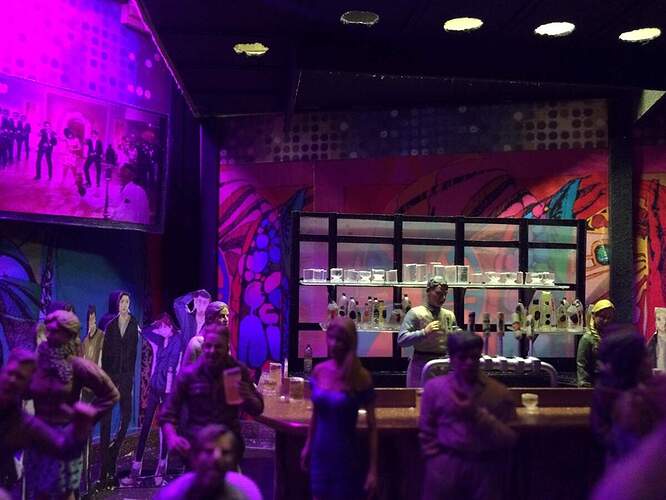 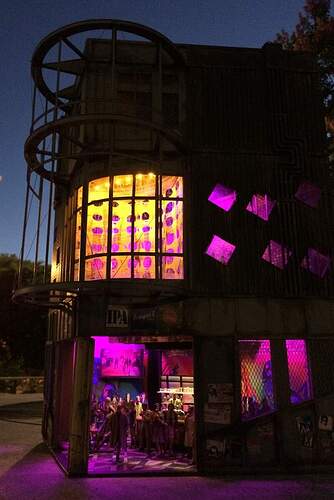 I must have been young and ambitious! A few outside of the bar: 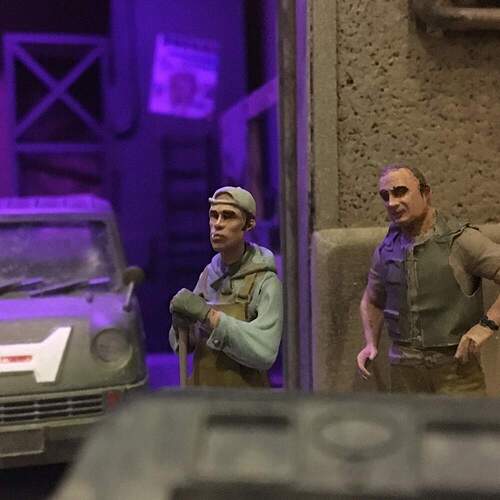 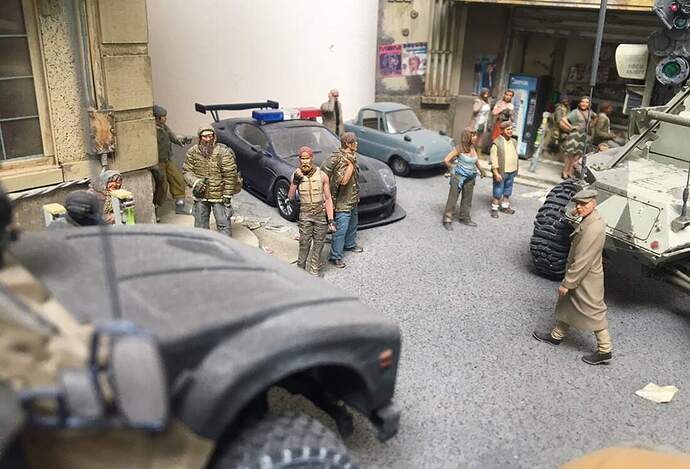 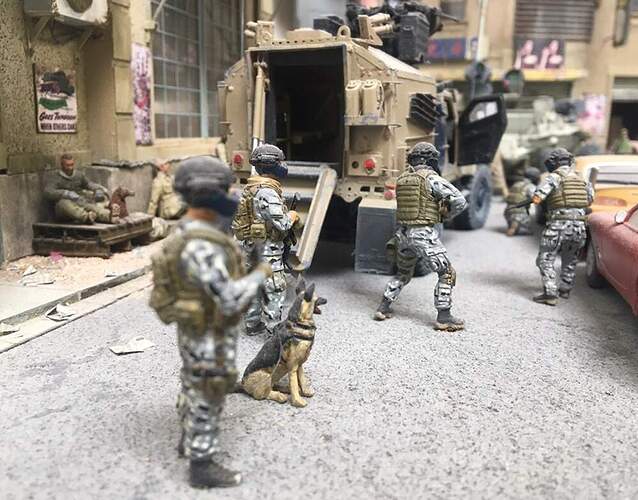 There is a long storyline behind this build - inspired by the first Bladerunner. I read all the movie intro text one night and realized, it was (at the time) coming up (ca 2019), and that many of the vehicles could be matched with modern looking kits (at the time I really liked building those MATVs), and I was traveling in and out of China about once a month - combined, I pictured intense urban streets, modern vehicles, and a dio.

And, yes, it resulted in a LOT of practice painting figures - of all types. 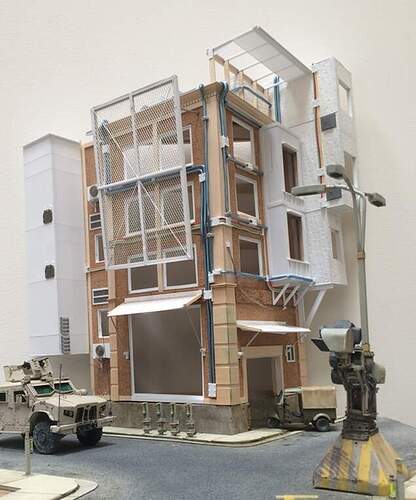 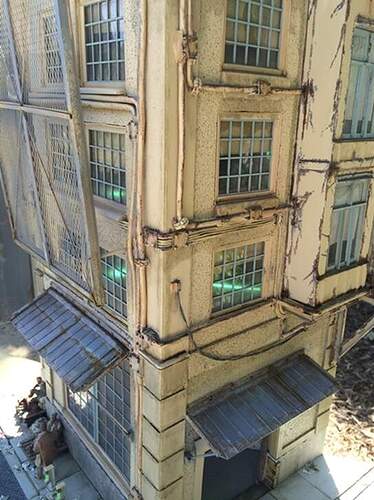 And of course, a great opportunity to (try to) scratchbuild whatever I could think of!

And, overall, though for whatever reason, not all the lights on: 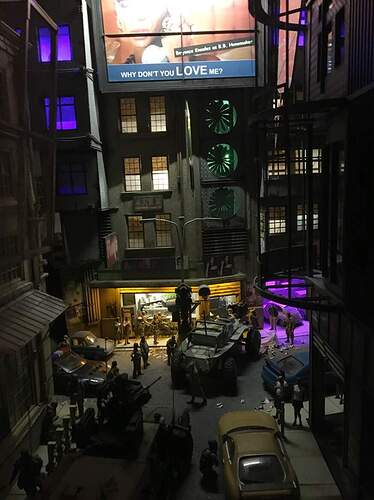 Some of you might recall from the movie, the giant billboard with a woman on it - for my gal, I chose pop queen Beyonce! and gave her a huge billboard, with the action on the streets below!

Part of the grand and ultimately flawed plan behind this was to make dio that could be photographed from all angles, and not have to deal with unintended background distractions. It was laid out in a “Y” pattern, and works fine is you carefully choose your shots - except, from the outside - it just looks like a collection of scrap material surrounding a busy street!

So, for now, I’ll stick with finishing the race car shop - which, as you can see above has a while to go, then maybe back to what to do with the Like, but not the Bladerunner

Thanks for posting those images Nick, I knew you’d be too modest to do it unless someone asked

I used up the old thesaurus when they were originally posted so all I got left is they’re kinda OK. I needed some defibrillation when you said it was “…not yet destroyed!” & the Dio Police were seriously considering an Intervention until your later clarification

. Was that amazing Afghanistan convoy a victim of the purge?

Btw in the 5th photo where did you get the guy in the raincoat crossing the street, or was he a one-off? Looks useful for my thing. I don’t want to clog this thread with the answer to your question about Anthropoid’s schedule, it’ll be more relevant on mine anyway. Looking forward to seeing how the car shop evolves…how many dio accessories are there in 1:20?

That is one awesome, no make that two awesome dios!!! Highly impressed!!!

Great build Nick, I recall when you where building it on the old site. Fun to watch the progress. This one looks just as good.

Just to echo a bit… impressive!

I like the humorous dialogue in the images as well.

Nice to see the new dio taking shape with the garage and vehicles, etc. Also taking the plunge on the “ge-o-teen” method of re-purposing! It all looks supurb as usual.
But most of all, it is rockin’ to see you back on the board man! A nice belated Christmas gift.
J

Tim, yes, that figure, I thought he was either MAIM or Stalingrad, but looked at both their websites to confirm, but no luck?? hmm - ? I’m just not sure.

As for 1/20 scale details, no, I couldn’t find much other than these figures for dioramas. I like scratch building, so haver gone about making tools etc. I just noticed, the toolbar doesn’t have the picture icon showing, so I can’t show you what I’ve built! weird?

HI Jim - glad you like that! It’s nerve wracking to hack up nice figures, but in this case, seemed the right thing to do - this poor guy was looking way too serious for what I’m doing

HI Jerry, thanks, and glad to hear you like this so far - eventually I’ll paint this guy and his friends. Compared to 1/35 he is huge - and face now clearly visible. Believe it or not, I’m sort of looking forward to trying - hopefully not words to regret!

Ok - now I’m curious about images? I still don’t have the icon in the tool bar? Maybe back to third party hosting? I’ll try using Flickr: 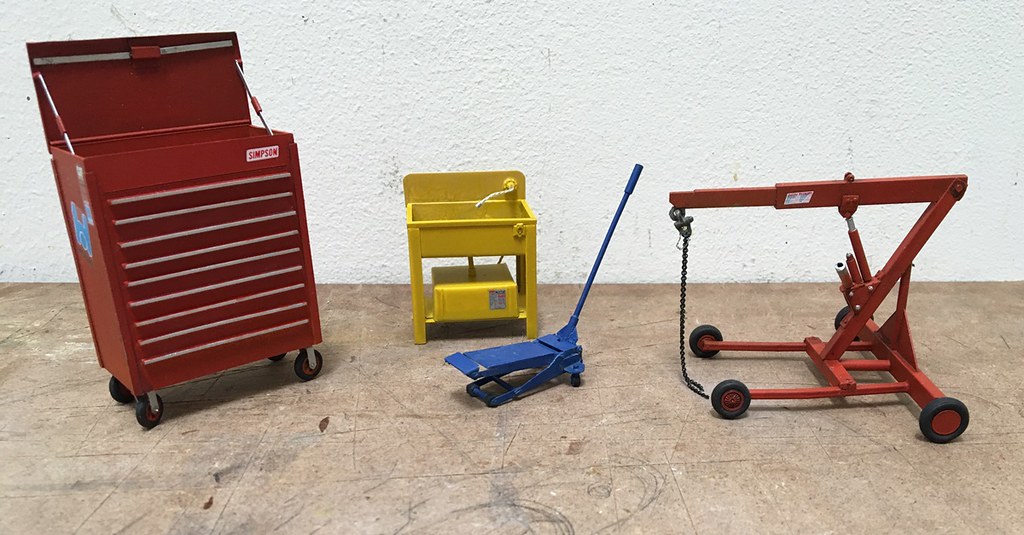 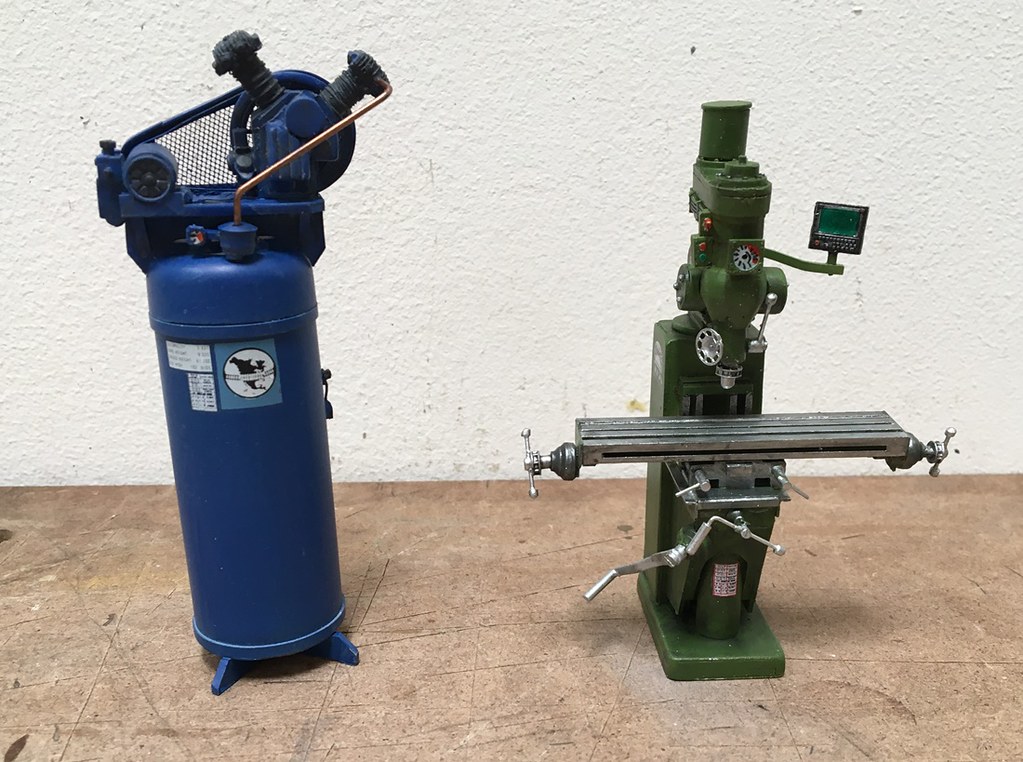 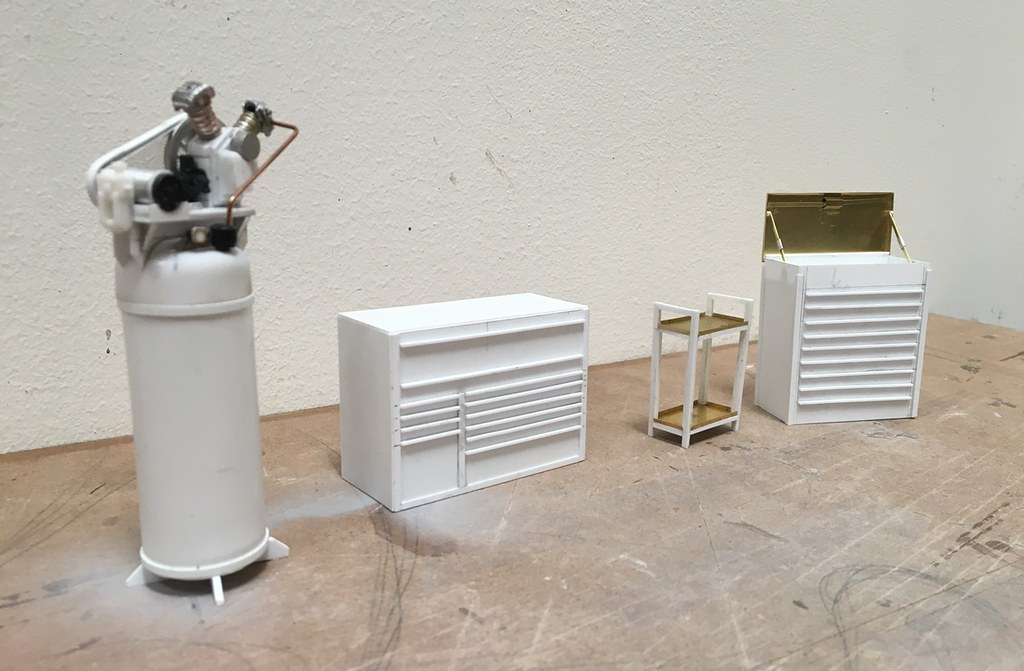 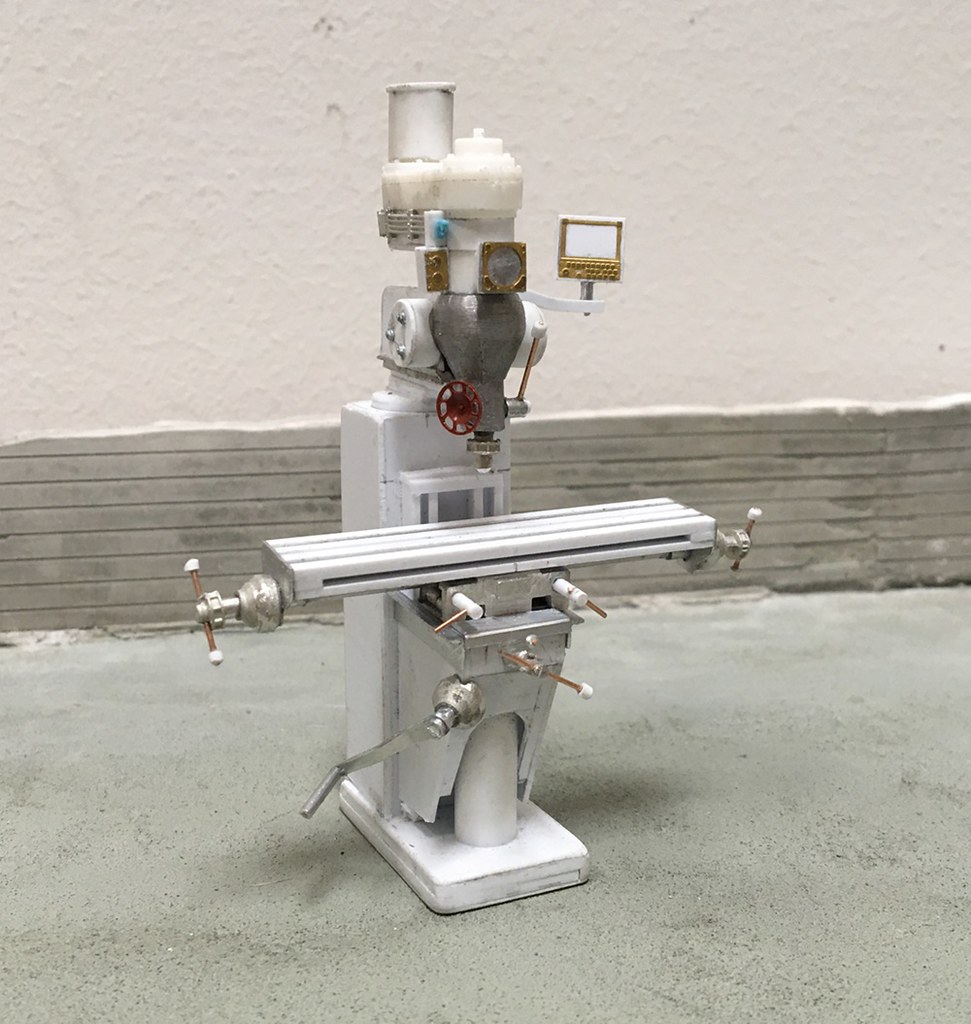 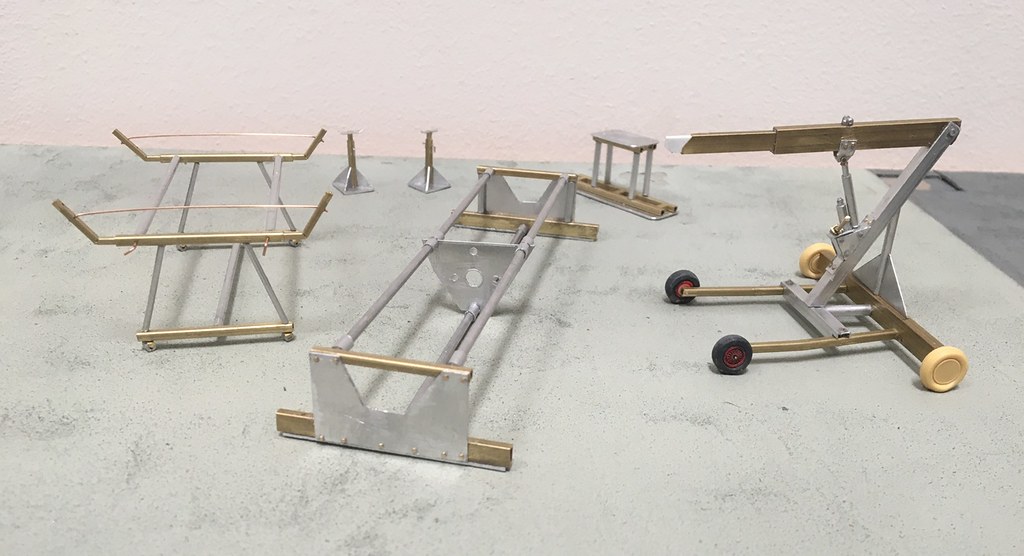 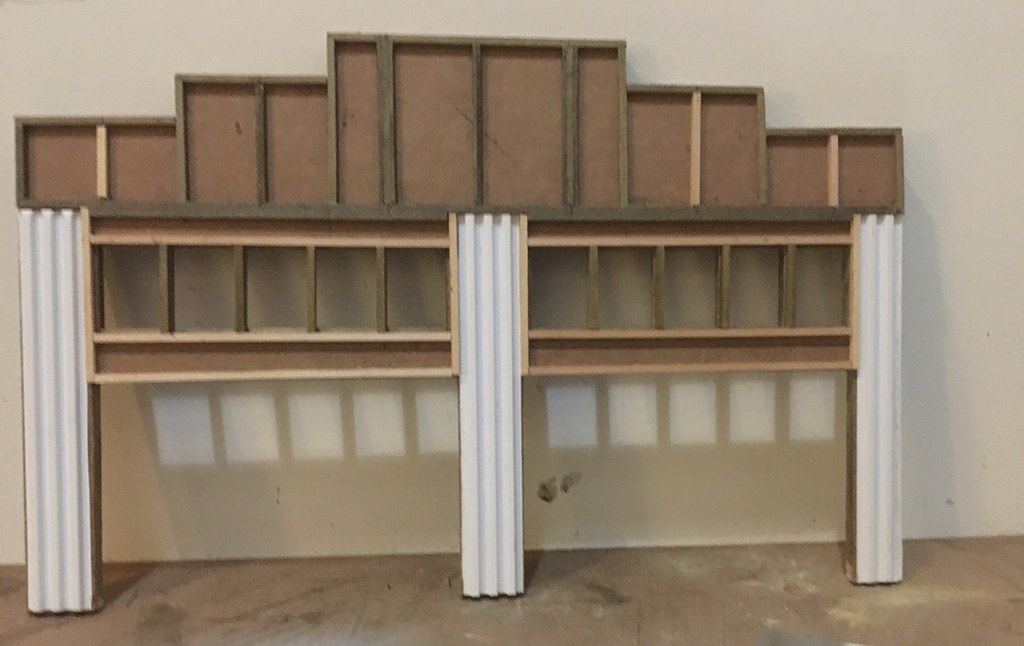 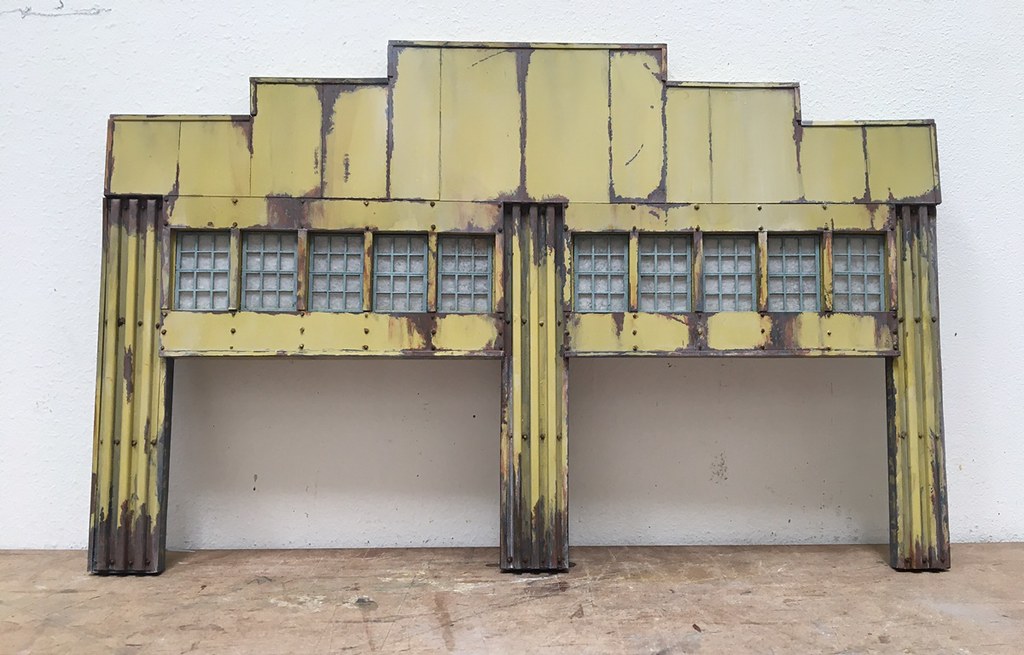 Above, you can see - plenty of stuff built - as for posting, this is weird, the picture Icon still isn’t showing up on the toolbar and I’m getting some extra notes from the Flickr site? I didn’t have to do this when I started this thread?

This is weird - there was a picture icon in the toolbar - now it’s gone? I don’t think I changed settings, but must have…??? 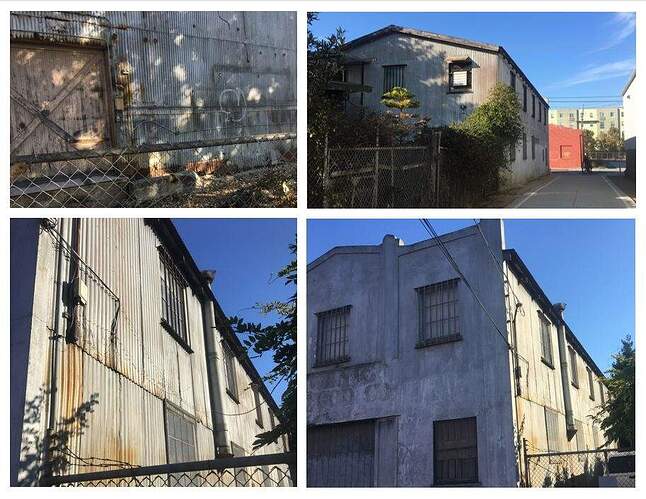 And it works! I’m basing this building on the character of old shops and sheds near my house!

I ran into the same problem last night when trying to post some pics.
But , you found it as did I

Mad skills with that compressor and drill press!
Have you tried using the icon that looks like a copier with an arrow pointing up?
J

Well on top of your imaging issues I think you must have accidentally posted pictures of real workshop equipment… c’mon you can’t fool me where are the ones you made?

Love all the tooling and accessories Nick, especially the mill ! Is it patterned off a particular type? 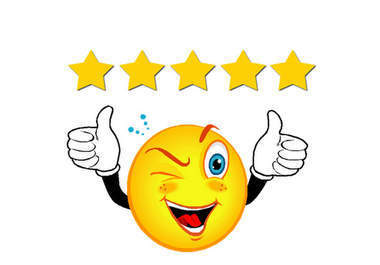 Awesome tooling you made… I ame sure they are also operational?