I like to do in-betweens as a variation on doing the heavy metal a.k.a. tanks. Usually theu come in the form of small 4x4s and a GAZ has been on my list for a while now. Luckily I was given one recently; a GAZ-67 by a company called AER. Which apparently are/were based in Moldova. had to look it up and it sits between the Ukraine and Romania.

What can I say about the kit? Boxart is kinf of all right, the manual is about A5-size. yes, the entire manual… The sprue layout is … fairly unique. Some parts are so close to the frames that only a knife get get inbetween. I snatched the images of the spreus from the web just to show the frames. 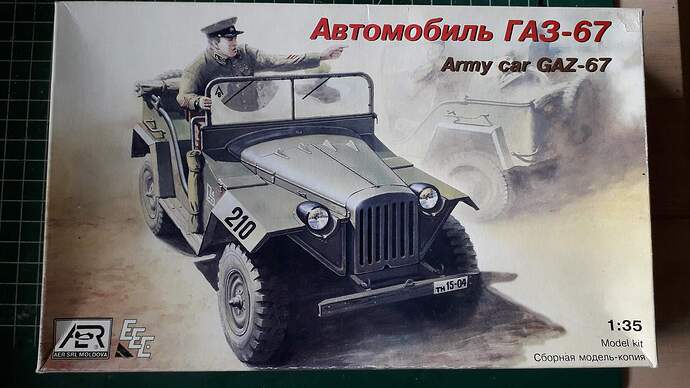 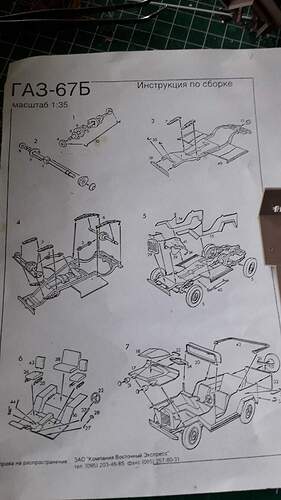 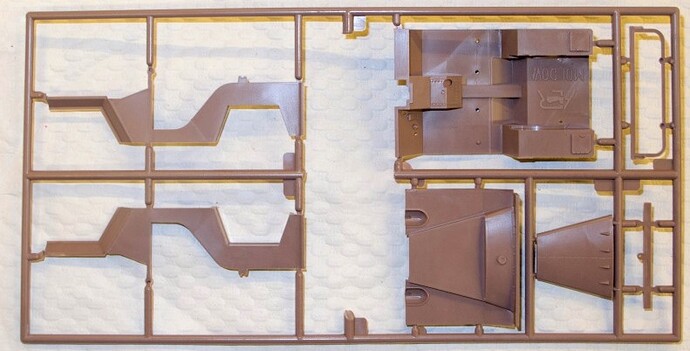 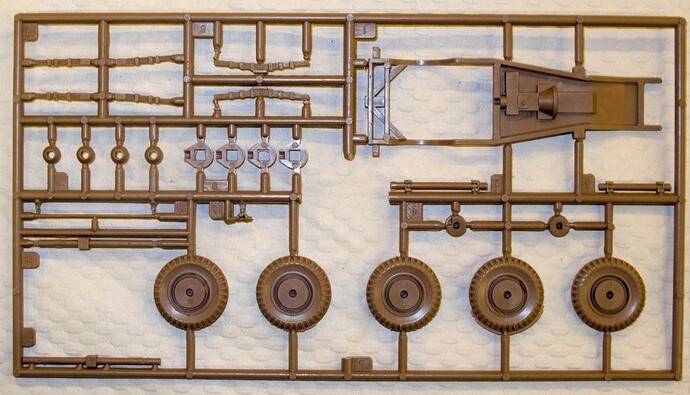 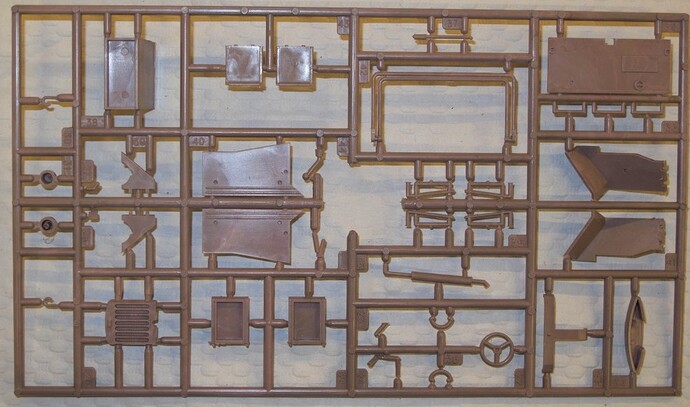 The kit comes in a strange sort of plastic; it is brittle, yet soft and glue doesn’t really “bite”. The kit also has quite a lot of flash, especially on areas where there is details, like the running surface of the tires and using one of those pliable, disposable nailfiles it just ate it all away.

Fit is suboptimal and dimensions of a number of the smaller parts are rather … hefty.
There are locationholes ( a few), but the matching pegs on the parts are fewer. Many locations are mere guessing work, so having visual references are an absolute must!
And as icing on the cake there is a massive companylogo, right in the back of the GAZ, where the rearseat is supposed to go. 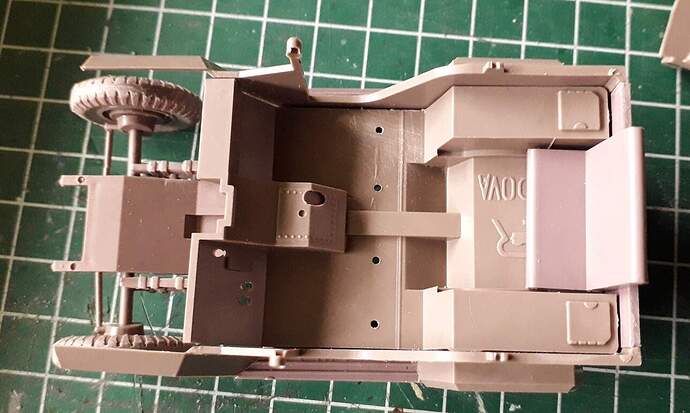 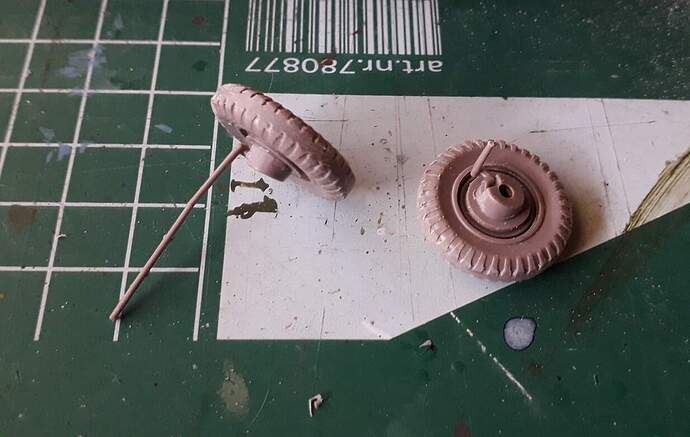 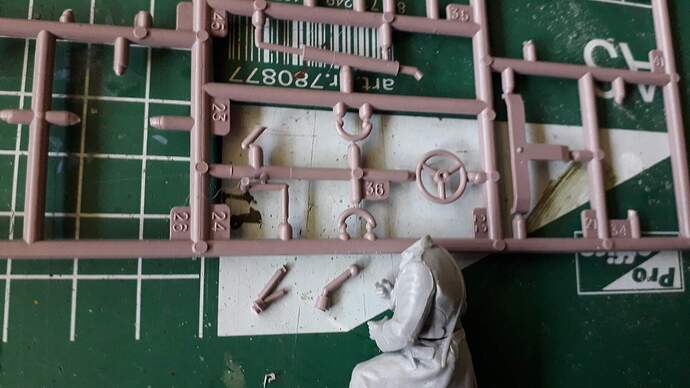 Maybe after a bottle of vodka the fit isn’t much of an issue anymore? I see that I have to redo one of the bars of the gril. A former owner had removed these, so I had to put them back. 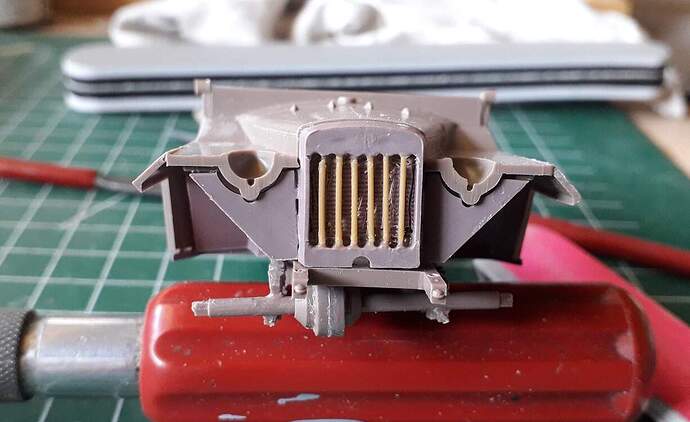 Some additional and more to scale detail added. 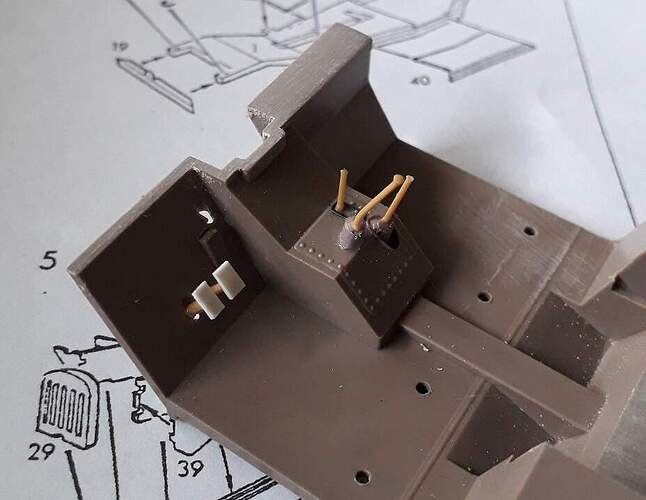 Wow - good luck with this one Ron. Some of those pics are down right scary lol. I have 3 ASU-57s ; one from AER Moldova, Toga and one from Hobby Boss. I started the one from AER a few years ago but put it down for other projects. I have a metal barrel for it which cost more than the kit, can’t remember who made it though. I’m keeping the hobby boss version and maybe one of the others to do an Egyptian version, we’ll see.

(With apologies for photo-bombing) Hi Ron, for comparison this is the venerable Tamiya 67B (from the late 70’s?) which I built a few years ago. It was OK for its time if lacking in detail, although it seemed from photo-refs there wasn’t much detail to these Jeepskis anyway. Which is why I plastered it in mud. It’ll be interesting to see if your AER version is any advance, doesn’t look like they cloned the Tamiya sprues (?) although there’s a similar clunkiness to the smaller parts. Good luck & careful with the Stoli 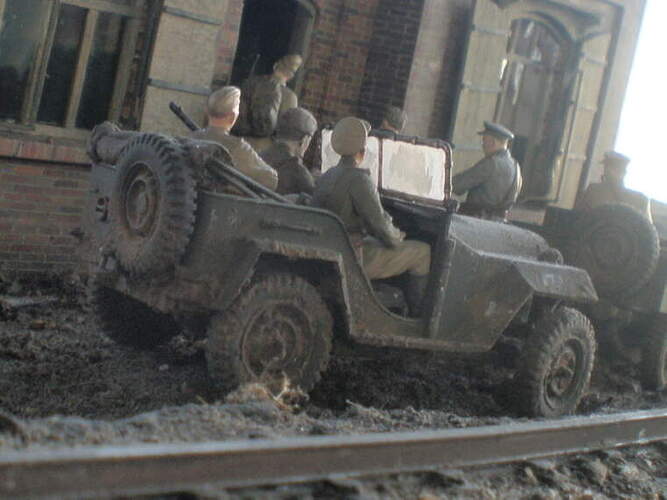 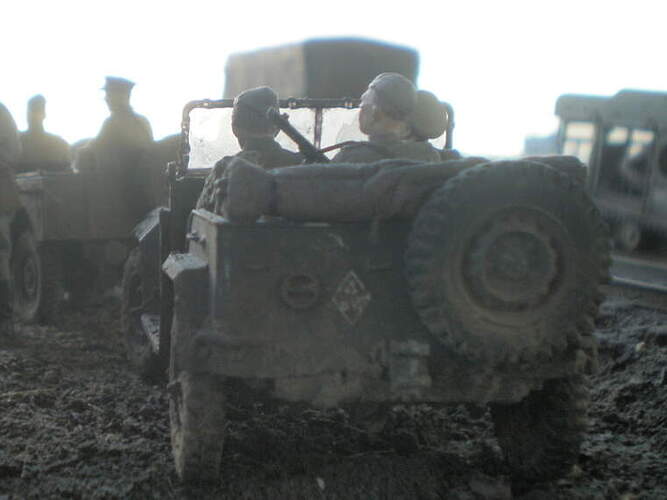 When I looked at the first photo of the dio, I really thought it is rare color photo from the Red Army jeep.

After reading the text I understood it is a diorama. Wow!,

Tim Martin shares the latest in his series of diodramas, this one titled

As you can see I close-cropped the above images just to illustrate the old Tamiya kit, this isn’t the place to show full images of that diorama otherwise I’d tick Ron off even more than I may have already. I can’t recall seeing the GAZ-67 portrayed anywhere else in this forum or the old one so I’m really glad he’s doing it, and better still by a different manufacturer

Tick me off?
With a diorama??
Hah! Fatt chance! I am not much of a diorama builder.

But the endresult is superb and the lighting just excellent!

Thanks Ron can’t beat daylight – I think final photographs taken in artificial light should be banned if realism’s the aim, but then we all have our own version of reality. Deeep…anyhow back to your build & I’ll fade back into the shade

Yes, the light really makes it all look realistic.
I hope you didn’t take my respons wrongly. I have the utmost respect and admiration for diorama builders!
But since you are responding… where does the frickin’ exhaust go???
I can’t make heads nor tails of the “instructions”, which are more like vague suggestions. And the internet isn’t much help either. I find images of postwar vehicles and Tamiya suggests it is placed under the center, towards the rear axle??

Good god man… that’s… something. You’re a good person for trying to do right by that kit.

I’ve got the 67B that came with the Tamiya Korean War Sherman. Maybe I’ll dig it out now too.

Ron I was looking at the Trumpeter Instructions for their Gaz67b and on page 4 it shows the exhaust muffler I think and the pipe mounted on the passenger side. It looks like the muffler is mounted sticking out from the bottom of the engine. I tried to copy a pic of it to put it here and couldn’t. Hope this helps

Very much like the early Willys jeep, along the passenger side. 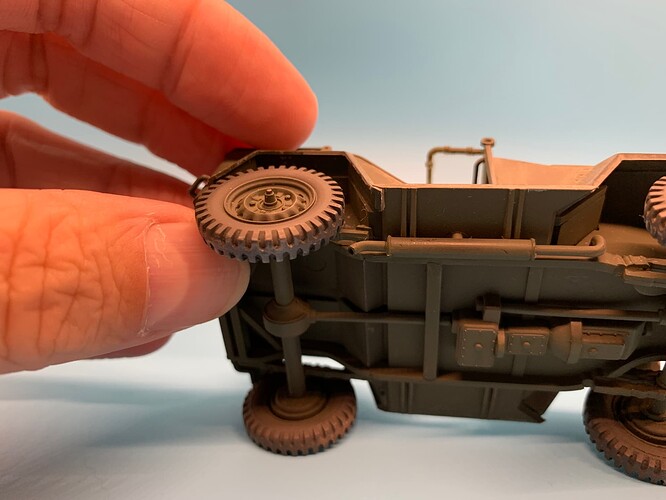 There you go- thanks Ryan !

Here is Trumpeters take, which looks better then Tamiya with the muffler next to the engine.

Thanks everyone!
But the exhaust with the horizontal muffler… I thought that that was the postwar exhaustsystem?
If not then the exhaust has to be completely rebuilt.
And after a bit of digging (and paying closer attention) it would seem that the Trumpeter version is the correct one. Meaning making a new one…

Go ahead!
I think it is great fun doing these small 4x4s. And a GAZ is just a bit different.

No worries Ron, just for the record this was Tamiya’s take, make of it what you will 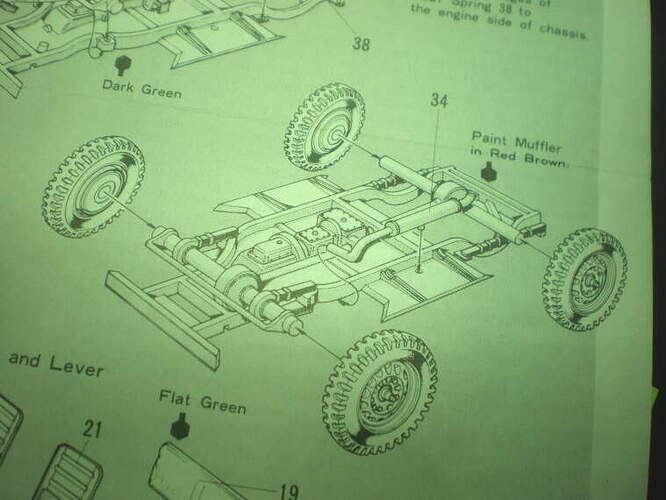 Interesting, is that 1/35? As my kit posted above was the Tamiya kit also. Though looking around I am not 100% sure. 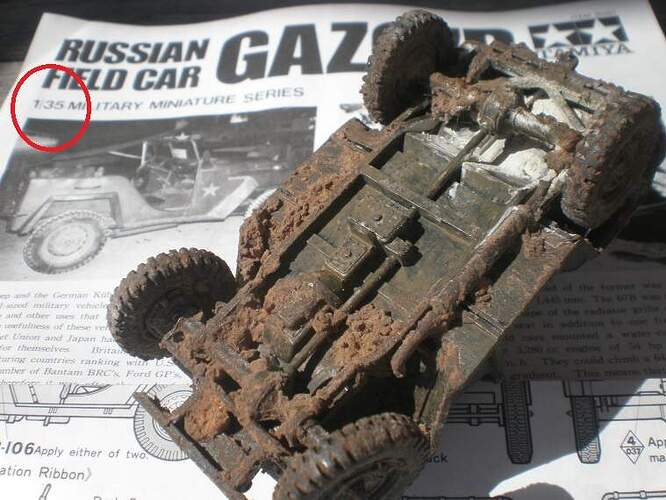 Never mind, I am a knucklehead. I had missed the arrow showing where it connects to the engine. Don’t know why I saw it more clearly this morning.

I like your weathering, a lot more then mine. I guess mine was used by city political officers who didn’t rate a staff car.

Back to the Ron show and his making of a silk purse from that.