Is ABS styrene the same as Evergreen Plastics styrene products, and glue-able with plastic glues such as Tamiya. etc?

Evergreen says their products are polystyrene.

Short answer is “no.” As @barnslayer said, Evergreen is polystyrene.

ABS is acrylic butyl styrene, a thermoformed plastic, but not chemically the same as polystyrene. ABS plastics are used by Plastruc (which also offers a few polystyrene items), but they require a different type of solvent cement to glue them.

Regular polystyrene cements will usually NOT work on ABS plastics. There are some few special plastic cements that will work on both, but generally each is normally glued with its own type. 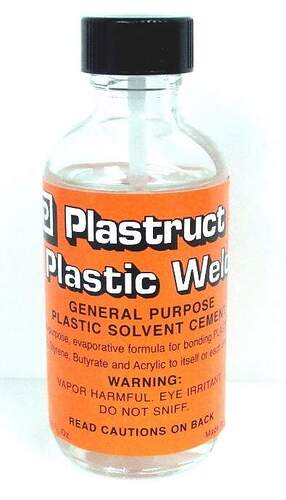 Thanks all. ABS plastic sheet, etc. for scratch building is sooo cheap from China!

Absolutely nothing wrong with ABS once you understand it’s just not the same thing as polystyrene. Use the proper plastic cement with it, and you’re good to go.