Achilles IIC Was it used in Operation Market Garden? If so, by which units?

The title tells it all. I have tried googling and using bing to find this information, but, my search skills have deserted me this evening. Any and all help will be greatly appreciated, Joel.

I came to the same conclusion as you

idk!
(well this was a useless comment)
Cheers!
L

This has the TO&E for the Anti Tank Artillery Regiment in a British Armored Division in June 1944. By the time of Market Garden they were looking to replace the Battery of 3” M10s with 17 Pdr M10s. In Guards Armored Division, it was the 21st Anti Tank Regiment assigned to the division.

In most Armoured Divisions (1st Polish, Guards, 7th and 11th Armoured), the Anti-Tank Regiment’s organisation had more of a focus on mobility. In June 1944 these units consisted of:

Aghh you just beat me to it Carlos!

I’ll see if I can dig up some more to add to what he has said.

Here’s a link to a picture of an M10 with the 75 AT Reg’t, VIII Corp from 4 Oct '44. Odds are pretty good they had these a couple of weeks earlier during Market Garden. 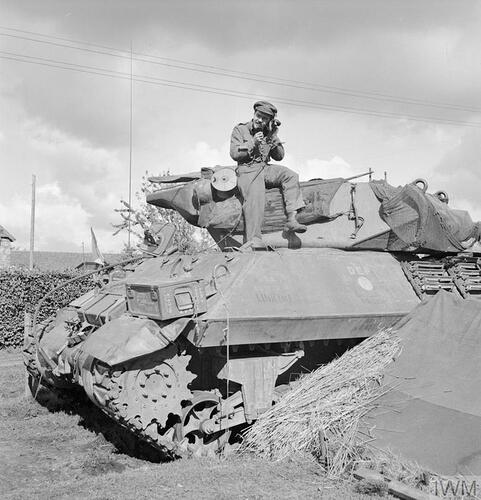 Should have mentioned that if you can get your head around the Imperial War Museum’s search engine, the on line resources they have are excellent.

Thank you Gentlemen! Now all I have to do is research the markings. Thanks again, Joel.

Now all I have to do is research the markings

That will be a bit easier. They will follow that standard markings of the British army and their parent division- Division insignia on one side, front and rear corner, opposite corner will be the Arm of Service, in this case the anti tank regiment having a red and blue square with the number 77. Then they may or may not carry battery markings. 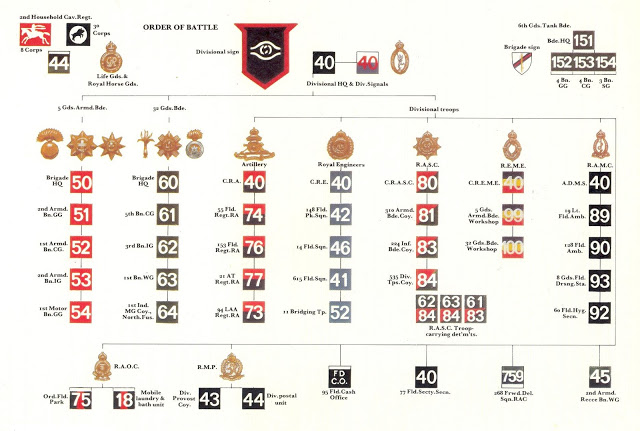 Thank you Stikpusher! I used to thing US Army vehicle data was hard, then I started building UK Armour. Thanks again, Joel.

You’re welcome Joel. US Army bumper codes are very easy to decipher. The British system is a lot more enigmatic so to speak. Each division will have the same set up of signs and numbers, but unless you know what are the regiments assigned to that division, and their seniority to one another, it’s a bit of a smoke screen.

To be fair, that was kind of the point. It was much easier for anyone (including the enemy) to decipher the alphanumeric US bumper codes than the seemingly random number and colours combination of Commonwealth units. The fun part is when formations changed their constituent units and everyone (at least in theory) had to repaint half their markings to be consistent with the seniority of each unit in the Army List…

To be fair, that was kind of the point

Yes it was! It was very good for security/intelligence purposes. In that respect, the system was hard to beat.

Here is a link to an explanation of signs/flashes used, along with examples.

Probably the best book I’ve ever found on the organisation of the British Army from 44 onwards is this:

Very clear and easy to follow. The guide on vehicle markings and division organisation diagrams is very useful. Not to mention lots of reference photos.
I bought my copy in Normandy a few years ago and it hasn’t left my side since!

Yes, +1 for these books (there are two in the set, one covers units and organisation, the other uniforms and equipment). I find it a bit ironic that a set of books that cover the British Army so well are written by a Frenchman! However I’m currently reading an SS unit history also written by two Frenchmen, so all cudos for the exhaustive research!

Agreed, they’re amazing works.
It was the second volume I bought in Normandy. At the Memorial de Caen Museum gift shop iirc. Was never able to find the first book back home, even my local bookstore couldn’t get it. As soon as I saw the combined edition published, I made sure to get a copy!

Joel, if you know the division you’re interested in modelling your Achilles, I can get a scan of that divisions organisation for you. Hopefully it will contain the information you need.

In most Armoured Divisions (1st Polish, Guards, 7th and 11th Armoured), the Anti-Tank Regiment’s organisation had more of a focus on mobility. In June 1944 these units consisted of:

11th Armoured was not directly involved in Market Garden. Its job was to secure the Flank and later move on Helmond, however they did have 17 Pounder ‘Achilles’ at the time: 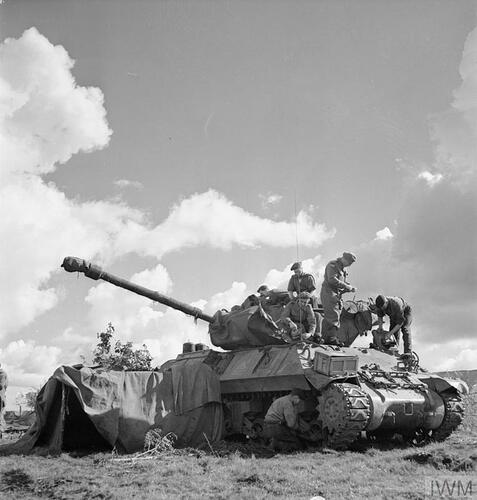 Phantom Phanitic, Thank you for the offer! I am looking for the Guards Armoured Division, 21 Anti Tank Regiment, Royal Artillery. I hope this is enough info for you, cuz I’m working on “by guess, By gosh” logic! Thanks again for the help, Joel.

No problems. I’ll dig the book out over the weekend and see what is says.
It should have all the information you need for the markings.

I 'preciate that, thanks again, Joel.