I am ready to add decals to my M151 build so I have a question regarding bumper numbers. Does anyone here know what the typical bumper numbers would be on M151s in one of the Armored Cavalry Regiments in West Germany during the Cold War?
I only vaguely remember my time in a Mech Infantry Battalion where the First Sergeant had one and I believe it was 5 after the company letter. It’s been almost 35 years and my memory is foggy on the matter.
Any help would be appreciated. 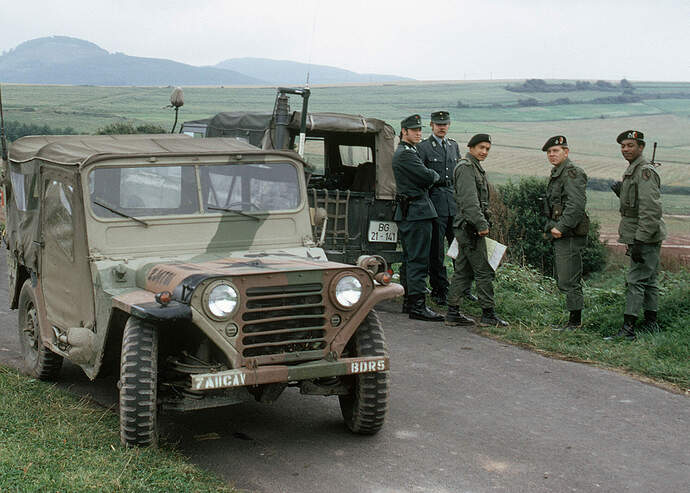 Thanks for the photo Dan. 5th ID, Mar 84-Nov 87. We were supposed to rotate for overseas into 1st AD at that time.

Hey @Dan, what camo scheme is the MUTT A1 wearing, I like the colors used.

Isn’t this MASTERS? Not sure really. 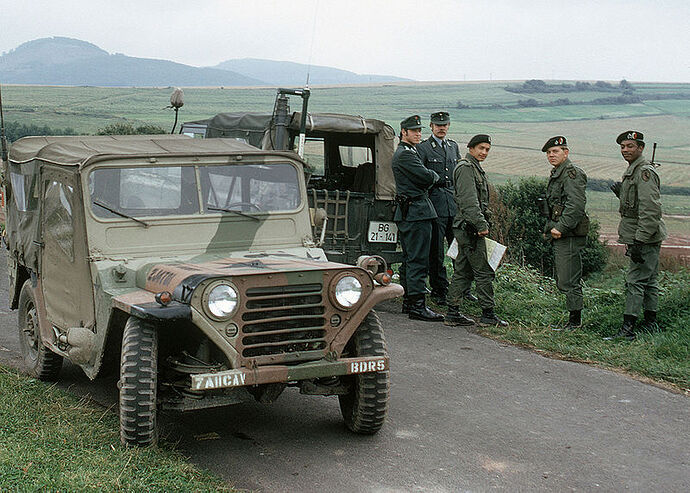 This is actually a cropped pic, I’ll look for the larger version.

I guess I need to study up on MASSTER camo, the 11ACR MUTT I would say is Europe tones, the resto pics look more Mediterrainian? I prefer the darker tones of the first pic.

Well, I was hoping for a line unit, and not one of the border outpost jeeps, like in the photo. I did just find this one from 2nd ACR, E Troop in Dual Tex camo. I presume it is the Troop CO’s ride. 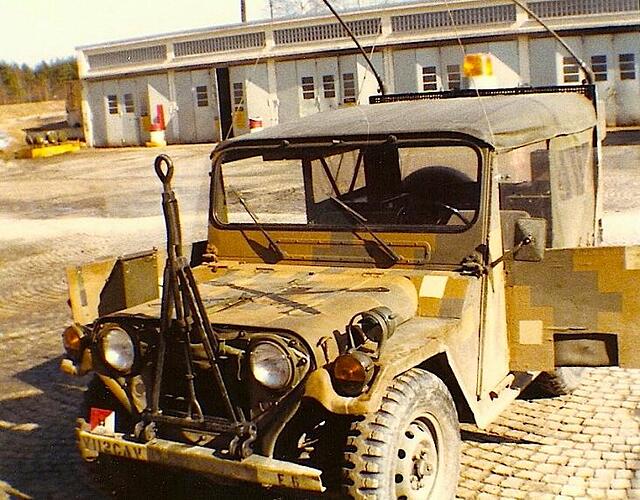 That’s for their wheeled vehicles, armored vehicles assigned to them would be 55, 66, 77.

2ACR’s bumper numbers for example would be depending on the period:period

V 11CAV ---------- HQ 6 black over MERDC
Around this time 11ACR included their squadron in the bumper numbers example:

Best bet is to find a pic of a M151 that matches the era you want.

Excellent info 2CAV, thank you so much. I went with the photo above and a gut feeling based off older photos when I marked my 151 last nite. You confirmed that I wasn’t too far off target.
Thanks again.

No one called the M151 a Mutt that used them.

Beenntheredonethat is correct. It is/was not called a MUTT. MUTT was a name coined by Ford, but not used by the US military. It was used by Tamiya when they came out with their M151A2 model in the early '80s and incorrectly used by modelers ever since. The US Military called them either 1/4 tons, M151s, or jeeps.

My bad, I stand corrected. I’ve owned a CJ2A and a CJ3B, those are Jeeps to me, when I was in USAFE we used M998s or CUCVs so your interpretation of my misinformed understanding correctly stems from Tamiya’s error. I am certainly not an authority on everything and liable to say something inaccurate but thankfully I have the humility to appreciate someone with the integrity to teach and not just condemn. I esteem anyone with the finesse the maturity and the professionalism to observe the social graces and skill to correct me without a condescending or arrogant candor, it proves their intellect without questioning their credentials. Thanks again Gino

No one. Ever. Class over.

It’s all good buddy I’m here to learn what I can, I had the benefit of learning good manners a long time ago.