Howdy friends and neighbors in this heck of the woods,

As the M114A1/M114A2 takes it time before it will be offered in Germany, as a stopgap, I want to build the AIFV MILAN, offered by Azimut. It’s in fact the AFV Club AIFV with additional Azimut resin parts to build the AIFV MILAN.
My intention is to add the interior, as I had already done with the AIFV PC some years ago.
In my shelf I have the book by Henri Demaret, “L’AIFV en service a la Foerce Terrestre Belge”. On page 31 it shows two pictures of the interior, taken thru the open ramp. But these two pictures aren’t helpful, as you get limited information concerning the interior of the AIFV-MILAN!

I would like to ask, if anybody of this community has some pictures in question.

YOUR ENDEAVORS ARE HIGHLY APPRECIATED!

Hank, I do not have any reference pics but some years ago a friend of mine - who maintains his own Blog - undertook the same conversion. The link to his first instalmant is here:

It then runs for a couple of months. It does not cover an interior but you might find some of it useful.

Maybe you could try to enlarge the pics you’ll find here :
https://www.armyrecognition.com/europe/Belgique/vehicules_legers/AIFV/AIFV_Milan/AIFV_Milan_Belgique_diaporama.htm

I would like to see some photos/info on how you modeled the interior of the AIFV.

I’ve got some photos off Missing-Lynxs, but any info is appreciated.

How did you get the ADV/Azimut or Best Value set for the AIFV MILAN? I thought Azimut was closed down.

Tom
Only the website is still down. The actual shop is working. As usual with Azimut I advise you to call them prior to placing any order. This way you’ll be sure what you need is available and can be shipped.

Interested to see what you find. Besides the Trackpad series on the Belgian Leopard tank and variants and the Belgian CVR(T)s books, it’s hard to find books on Belgian armor. I’ve got the same AIFV book you mentioned and also Belgische Heeresstreitkräfte in Deutschland by Peter Blume but no interiors in there.

I sent a message off to IPMS Belgium to see if any of their members have information or photos.

I would think the AIFV is still used in its primary role as an AIFV. So, the missiles would be accessible, but not a hinderance to the squad in the troop compartment. If the Belgians use the bench seats down the middle of the AIFV, I would think the missiles are stored similar to the YPR layout-along the interior walls. In the YPR, there appear to be missile stowage brackets on the right side of the interior. 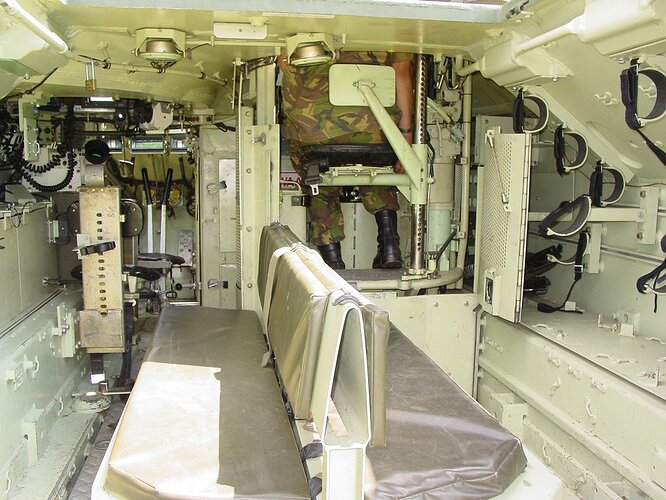 Thanks! Do you happen to have an address for Azimut?

I was about to order the AIFV MILAN and some figures when the site went dark.
Azimut is about the only site for Indochine or Algeria figures.

Do you happen to have an address for Azimut?

Tom, I would call it luck!

By chance a Belgium modeler gave me the information concerning Azimut and the email address. I see, Tom, you got the phone number already.

Concerning the interior of the AIFV MILAN, as the middle seats are not in use as this space is used for the storage rack for the MILAN ATGM. I’ll use an academy’s M113 floor panel. As I have interior parts of the M113 for several vehicles, that won’t be any problem! Years ago I ordered Iron Division’s the corrected firewalls. the rest wouldn’t be a problem.

Tom, as I’l start with the building the interior I’ll keep you in the loop.

For an appetizer I add pictures of the AIFV PC, that I had build 10 years ago. 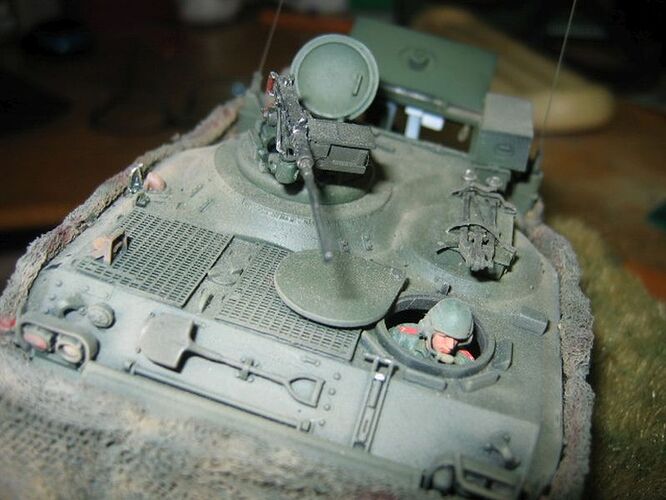 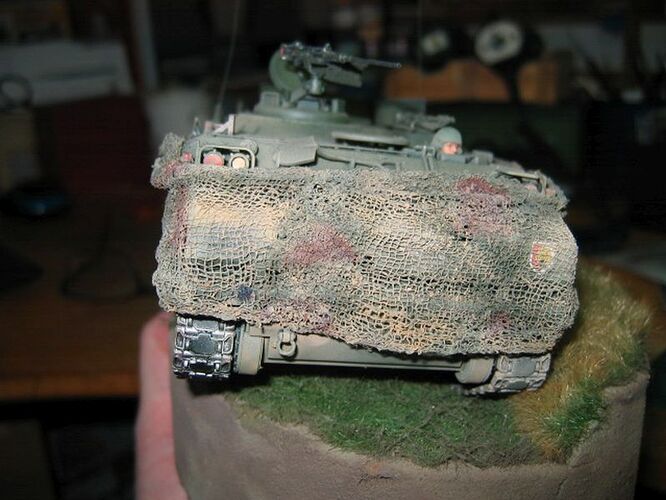 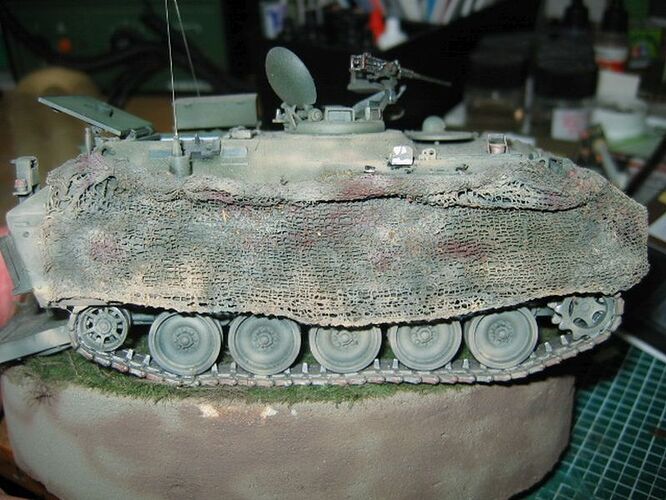 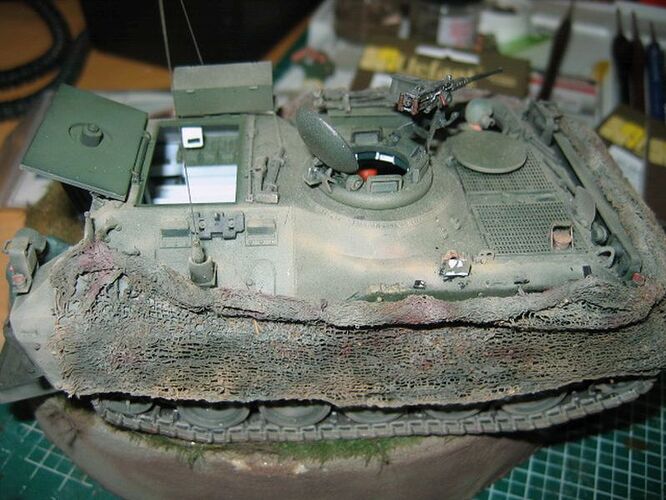 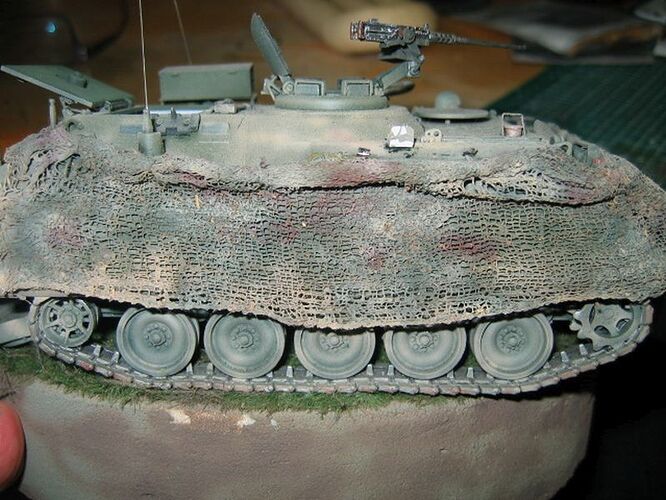 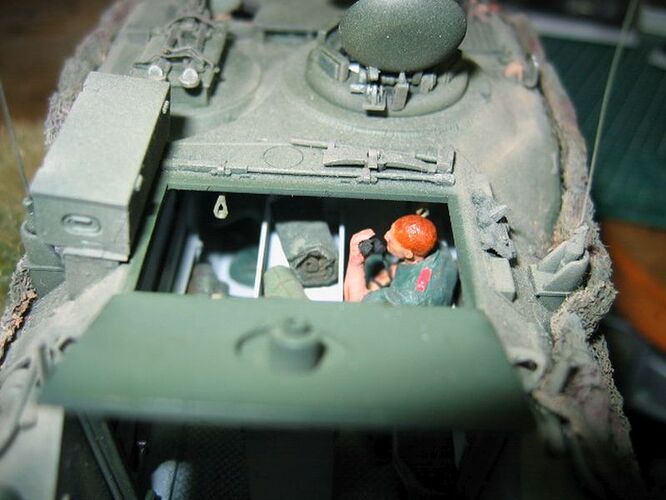 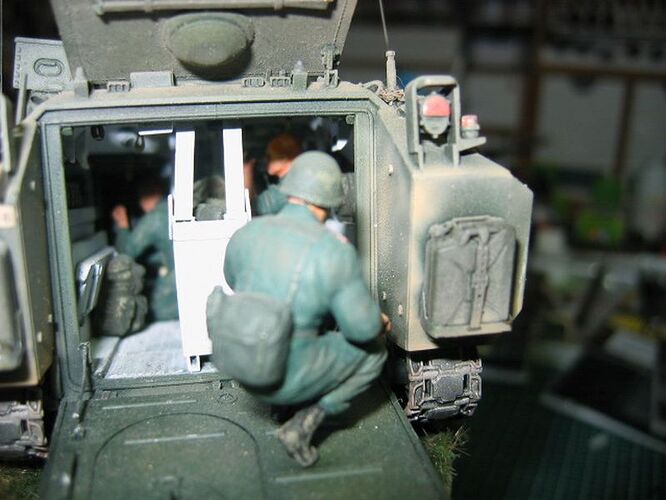 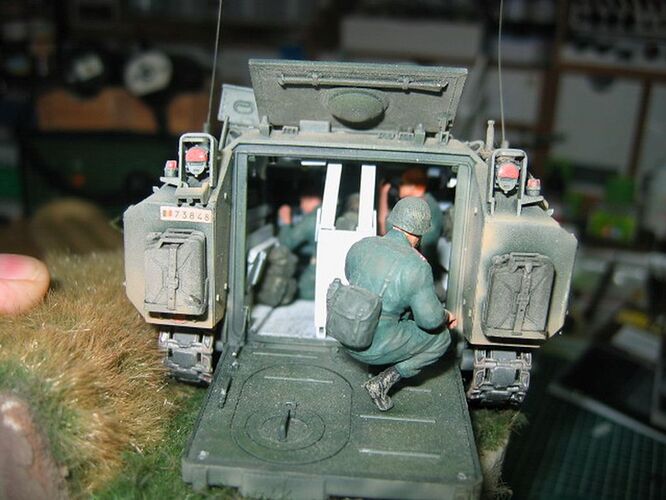 I send now the rest of the pictures, as tthere is a limit in place. 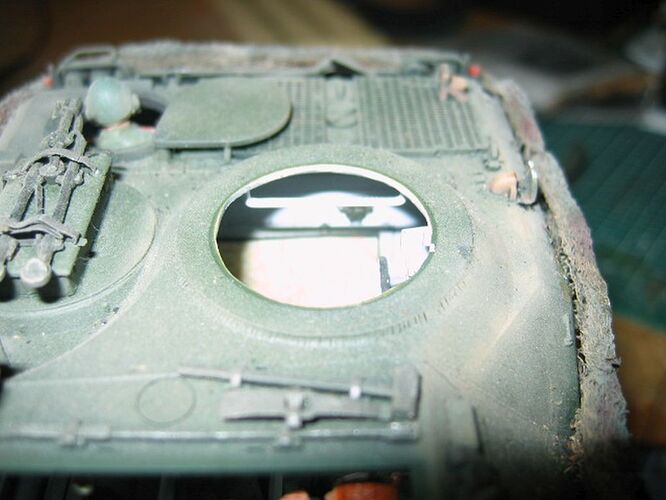 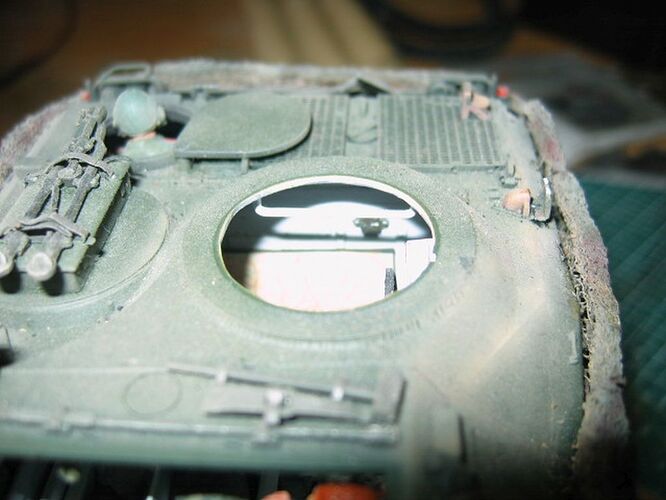 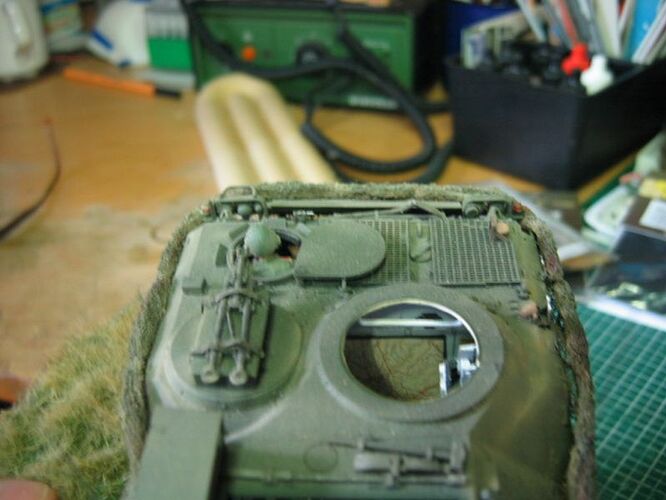 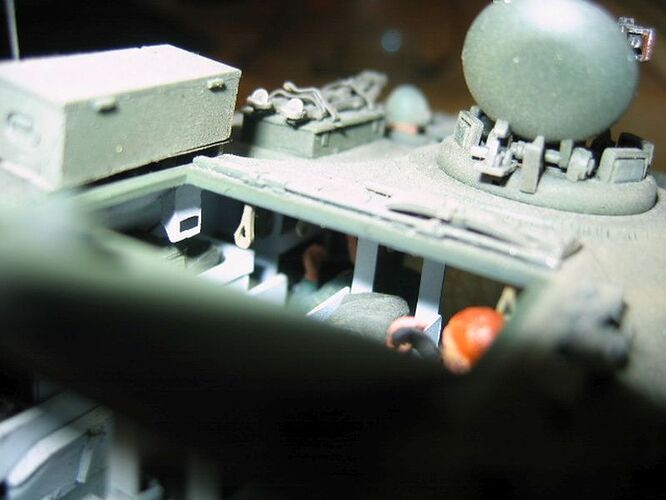 The scatch build radio racks with AN/VRC 12 and 43 I had build in side. 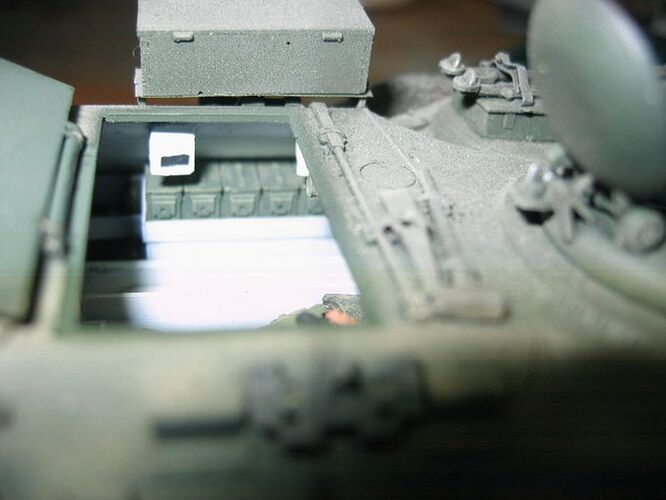 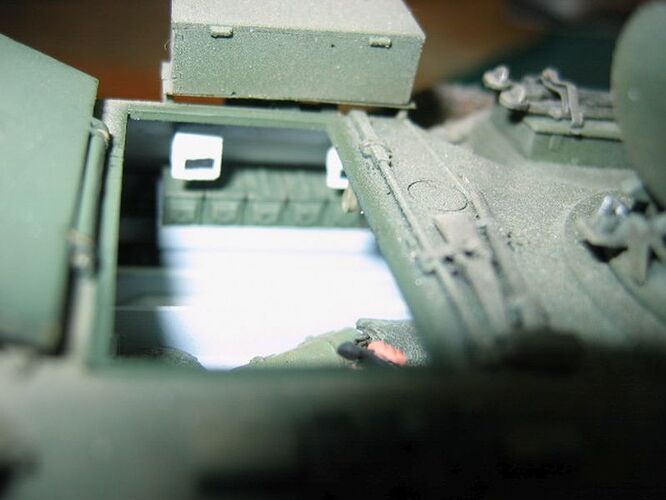 Tom, just for your information. The picture, you had inserted on Februar, 16th shows a Royal Netherlands Army YPR 765.

I too went for the camouflaged look: 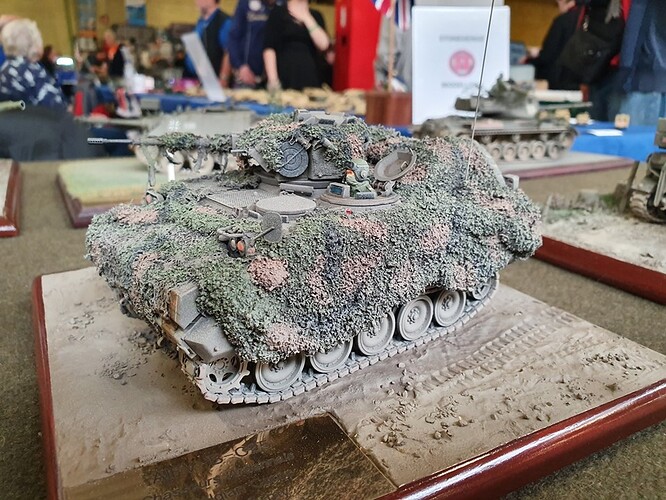 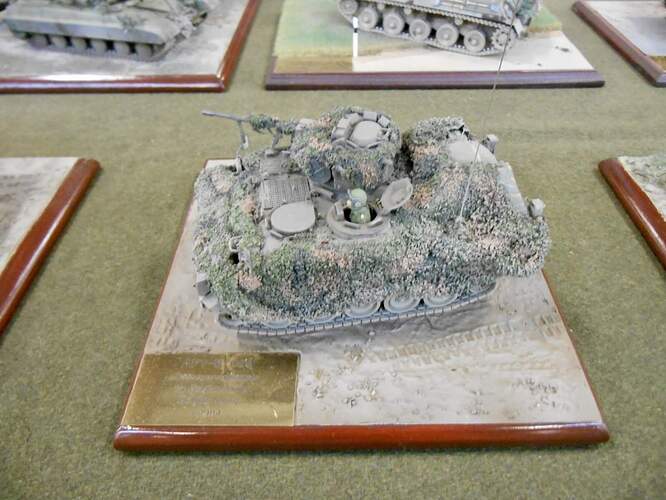 Pic quality not brilliant; was the link I posted earlier of any use to you…?

Hi Brian, your AIFV looks great! What model show was it?

That’s very kind; it was the Belgium IPMS show Plastic & Steel at Affligem, 2019. Myself and a mate (Pete Smith - who runs the Blog I directed you to), exhibit within the guise of “Stonehenge Modellers”; we normally have a table each; here’s mine from that time: 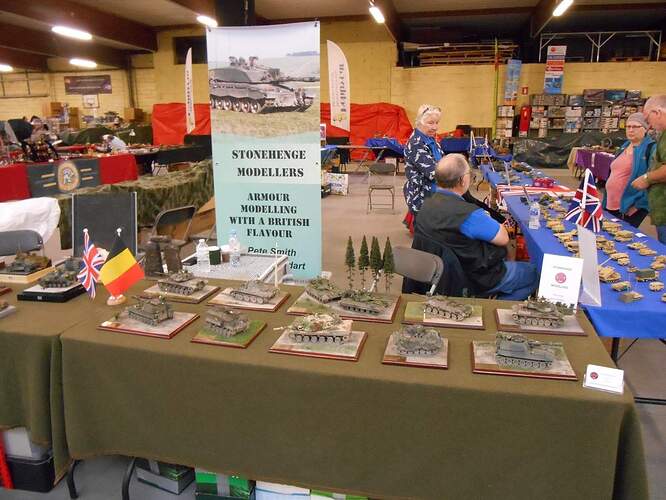 I would highly recommend the show. A pity that we haven’t been able to attend for the past couple of years due to the pandemic, but are a bit more hopeful this year. I just need to build, which I’ve been really poor at lately(!)

Well, thanks very much; I have to say it’s a bit counter-intuitive covering up one’s carefully built model (though Ihave to say that there were a few fit issues that I recall) to the extent that I did. But then, the real thing was: 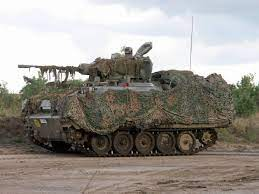 I used my normal method of gauze bandage, PVA glue and used tea leaves. I described in detail how to do this in my Leopard 1A1 model (somewhere within the Cold War section).