After finishing up the entries for the figure campaign, I started getting the dreaded ‘burn-out’. There’s only so much camo or OD that you can do before boredom sets in. So, something a bit different. Airfix’s French Legionnaire in 54mm, simply because I’ve never done one before. Now, the original pose isn’t exactly inspiring. Probably the reason why you don’t see many about. So, drawing on some forgotten skills, a conversion is in order to an ‘in-action’ pose. First things first though, this is from 1976 and, IIRC, was only on sale for a couple of years so, as can be expected from a kit of this age, has quite soft detail, which needed re-scribing. Next, was changing the pose, which required extensive putty work from the waist down. A new head from the Historex resin range and we’re off! 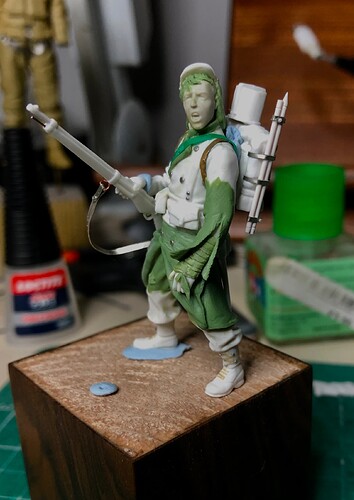 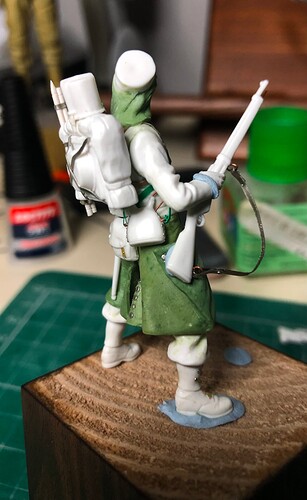 A few bits of lead foil, copper wire etc. and we’re ready for primer. Let’s see where this takes me?
G.

Damn Gary- that is so well modified you would never guess it was an old Airfix kit- stellar work to bring a kit like that up to this level!

Thanks Karl, got quite a few of these in the stash so, watch this space…

Will be following along as I came across a box of them for a earlier time period.

What is the word on these figures? Other then being close to 50 yrs old, is there any value in these kits? I have box to inventory and curious if it’s worth the effort. Here is one in the box. [image]

Got a few of the Napoleonic ones, plus a lot of Historex bits & pieces. I’m in the middle of converting the ECW Musketeer as well. Following Steve Ski’s thread is giving me lots of ideas. 42nd Highlander & French Cuirassier? Retreat from Corunna with the British Guardsman & 95th Rifleman? Anyone up for that after I finish this chap?

I would like to see either one. Steve’s painting has given me lots of ideas but also young padawan is not ready for the 42nd.

Beautiful job Lazarus! Can’t wait to see it painted up

Look what I found at the back of the cupboard… 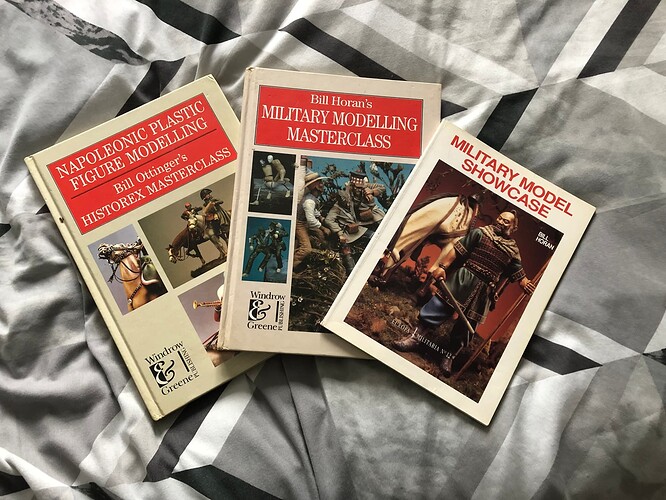 Should come in useful

I have the first two of those books. Very inspiring

Excellent scratch work, Laz! I say we do a tag-team switch hit; you go to bright colors, I’ll take the olive drab and OD greens, HA! I’m at burn out on those tartans, thankfully no more to do.

I say go for it, switch hitting seems to be a great mind stretcher and makes the technique pool a little larger. The bright colors have been very similar to working whites or greys as the shadows and highlights are much more subtle than the olives or greens, IMHO, of course.

Note of caution: Though they do mean well, the Napoleonic button counters can drive you bonkers if you’re not studied up on the particular subject being worked. I always found out after the fact, which can be a bit frustrating, and had to redo some items. It’s a fun area, no doubt, Ruck On!

Bill’s books can surely give a nudge in the right direction, they’re excellent motivation for me, personally.

Will be following along as I came across a box of them for a earlier time period.

Airfix was way ahead of its time, IMHO. The sculpt work back when I started back in the mid 70’s put others to shame and are still pretty decent by today’s standards. They can always be fine-tuned with not too much work.

I’m along for the ride on this one, Lazarus!

I hear you, Ski! I’m all burned out on the camo patterns. Too much of a good thing, maybe?
Started on a few different figures now. B-17 Crewman from Verlinden. All that sheepskin is tricky! Doing a post-apocalyptic dude with a flamethrower from Black Dog too. Anything goes with that one! Just waiting on a paint delivery for the Legionaire, forgot to order the blue last time…… Looking forward to doing more conversions though. Once upon a time, that’s all I used to do. Time to brush up on the old skills. If I get anywhere close to what you’re doing with the Highlanders, I’ll be a happy man!
G.

If I get anywhere close to what you’re doing with the Highlanders, I’ll be a happy man!

Thanks, Bro, your work is incredible! Your signature style is apparent, I can recognize it.

I’m not sure where I’ll go after this current set, but ya got me thinkin!

Oh well lads, the Legionnaire is taking an early bath in oven cleaner! I got him primed and that showed up about a million defects, so when he comes out of the bath, it’s going to be time for some gentle reworking. No point trying to paint something when you know that you’ll never be satisfied with it. I’ve invested a fair bit of time in this chap already so, a little bit more won’t hurt. I’ve still got a few figures on the painting bench at the moment so, I’ll post those as and when I get them finished, then I can devote more time to the Legionnaire.
G.