Airfix Tiger I - the new kit

So after about 50 years, Airfix have popped out a new small scale kit of the Tiger, and this time they’ve conformed to current norms and done it in 1/72. 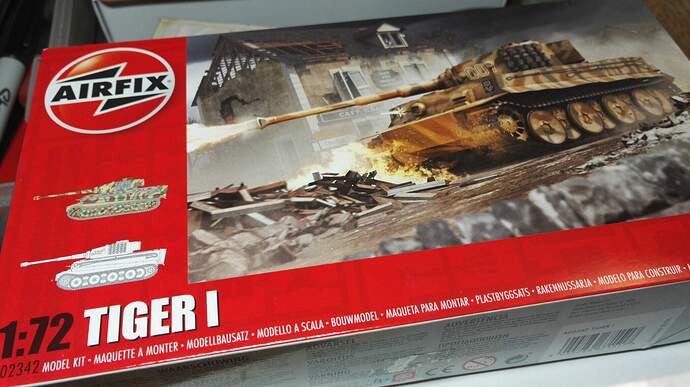 Less normal is that the hull is made up of flat plates. 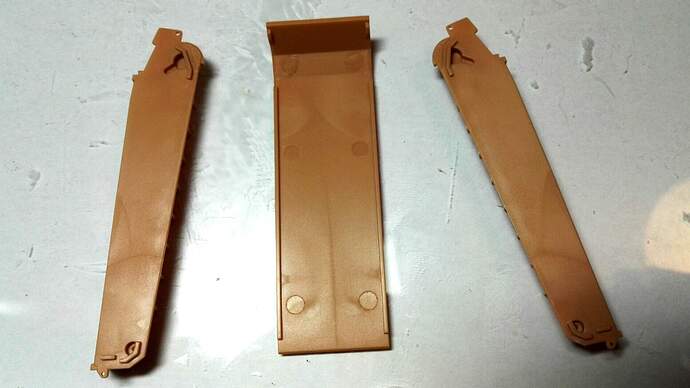 Unfortunately I hit an immediate fit problem. The front of the bottom plate has to fit into a narrow gap by the transmission case at the front, but it’s a bit too tight. So a little file and knife work to thin the edge down to fit. 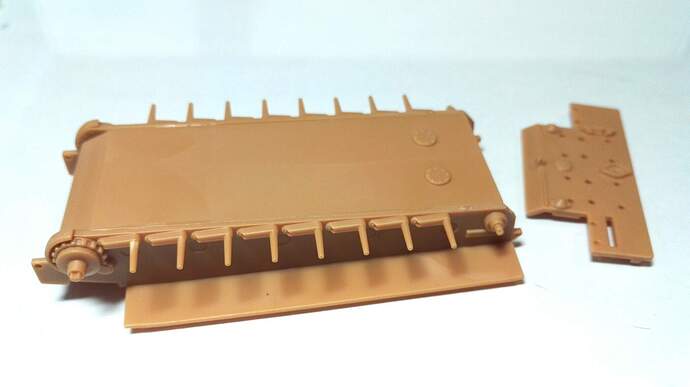 Adding that back plate, there was also a slight issue over the join with the top of the lower sides of the superstructure, needing some holding while it set, and I added a fillet of plastic to make sure there’s no gap. 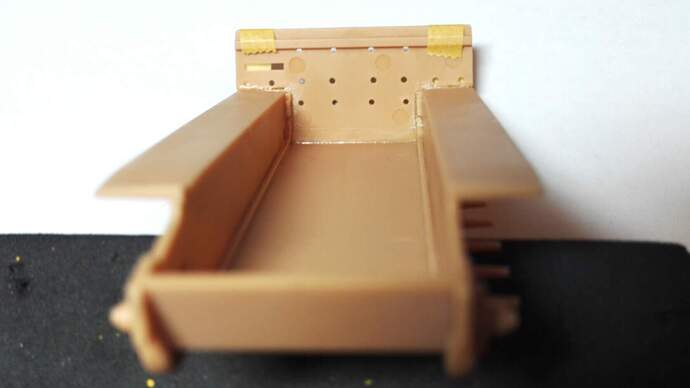 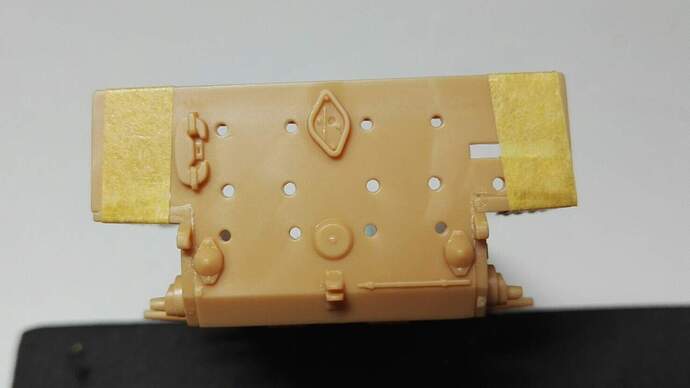 Instructions show you to drill out the locating holes for the tow cables. 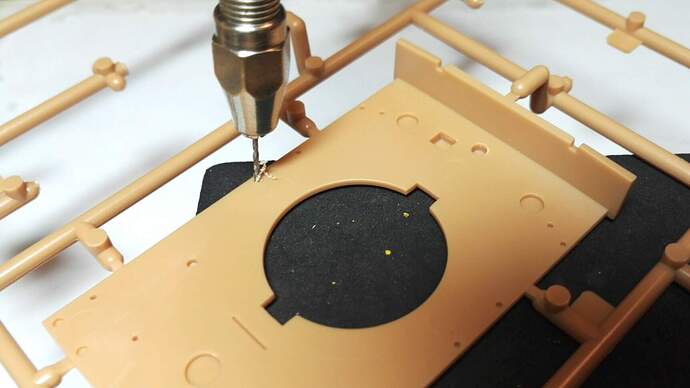 The front plate wedges in, with its moulded shovel. 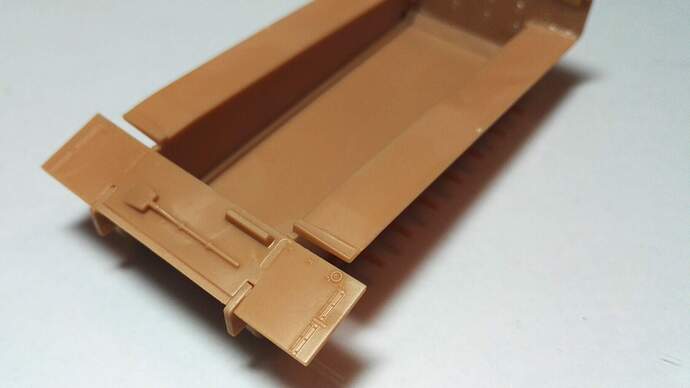 Then the top plate. 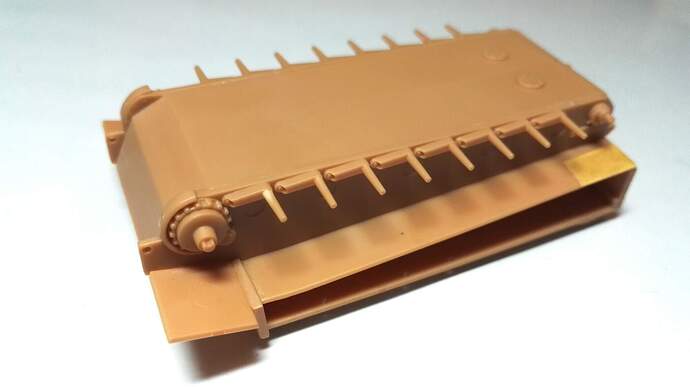 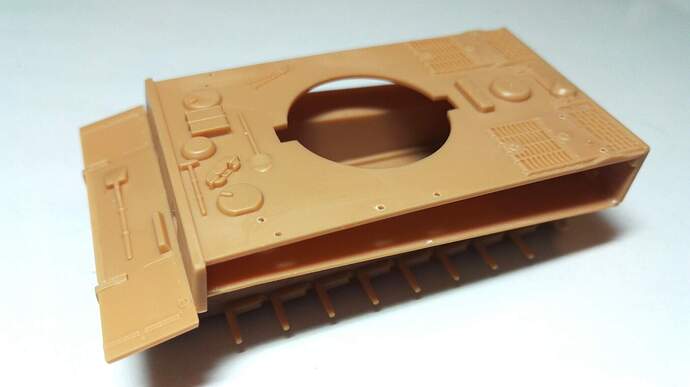 A good start Matthew.
Will be following with interest to see how it builds. I’m looking forward to the Firefly too when it hits the shelves.

Look at the size of those location holes for the exhaust shrouds? Hope they don’t cause a problem.

This falls short of what can be achieved in accuracy. Not that the version features are wrong, but things are all slightly the wrong shape.
And it doesn’t have an asymmetric turret. It is ltierally a quarter century since that was published.

This is certainly a case in point where new does NOT equal better! Airfix has been around for a VERY long time, and they should have known better and should have done better…very disappointing! Dragon’s 10, or 15 yr. old Tiger is much better, and probably still the best. BTW, Airfix’s Firefly is no better, and possibly worse.

Yup, I agree, the kit isn’t giving me a good feeling. I was planning on leaving it to the likes of David (well, David mainly) to point out the errors as I’m no expert. But there is the oddity of the choice of decals for the Wittman 007 for which I assume the early wheels are wrong. Being able to push it across the carpet with the Firefly is probably the main motivation for that, but I’d guess that the Bovington Tiger is the main source, so seems odd they didn’t just stick with that one.

Apart from anything else, the immediate impression is that the moulding seems like step back from other recent Airfix kits with a slightly blobby shiny feel. The main plus is no rubbery tracks.

Anyway, I plan to build it from the box and won’t attempt to correct it or improve anything. So feel free to strafe away. Maybe the turret will blow off.

Trumpeter put out I think, three 1/72nd Tigers a few years ago. They’re better than this. Sharper in detail, and you can’t point out a shape error unless it’s the fault of the molding.

I agree. If you hadn’t stated that this is an “all new” kit, I would have - just from the pictures - thought it is a trip down memory lane back to the quality of the 80ies…

I thought it looked a bit blobby and shiny, but I thought that might have been the way the camera caught it. It’s a bit disappointing seeing how nice the Cromwell and Jeep from a couple of years ago are.
Soft and blobby details does seem to be the norm with new Airfix. I have a couple of aircraft that look like they have inflatable toy machine guns! But others can be very sharp and in scale, sometimes in the same kit. They’re very inconsistent.

80ies?! Stuff from the '60’s is much better than this! Airfix should be ashamed. This kit looks like it came out of a bubble gum machine.

Matt, you might almost have a point about the bubblegum machine, because this kit has a very low price for UK company product - £9.99, probably unrealistically low, which makes me suspect it’s been designed down to that price point, like it’s got to retail for under a tenner.
Especially when you consider that although the box is quite small it was literally packed to the top with plastic as it contains a full two sets of styrene wheels and tracks which in a Tiger kit are big, so much so that the box felt oddly heavy for a 1/72 kit. So the money presumably has to be saved somehow, and maybe that means a sacrifice in mould quality and detail.

Oddly enough for the same price, the Spitfire VC has just hit the shelves and the quality is much better. Sharp details and lots of optional parts. The proof will of course be in the building. If it builds as well as it looks, I’ll be grabbing a couple more of those.
Maybe the Spit will sell more than the Tiger, so they’ll see more return on the investment, but they’re not doing themselves any favours by cutting corners.
I’m curious to see how it builds in the end. Good luck with it.

airfix hast a 1/35 hetzer out as well, is a dragon repop?

The Hetzer and other 1/35 releases so far are ex Academy.
The forthcoming Cromwell will be the first new tool Airfix 1/35 kit, I believe.

Yet another fit issue when adding the sides, they don’t quite meet up at the front, so some minor filing to get it flush. 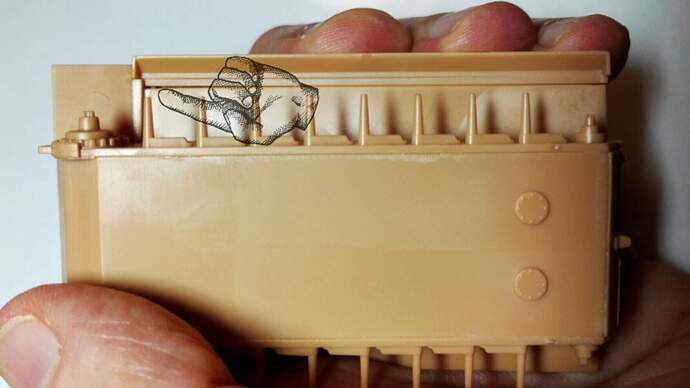 The filing allows the join with the driver’s front plate to close up. Despite my vow not to tinker, you can see I’ve had a go at the front track covers to thin them at least a bit from the previous slab like appearance, also to angle them down a touch. 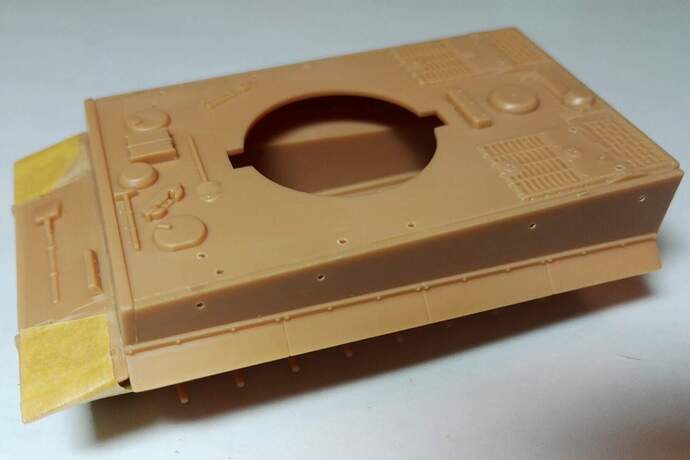 Those big holes on the back start to be filled with the exhausts. 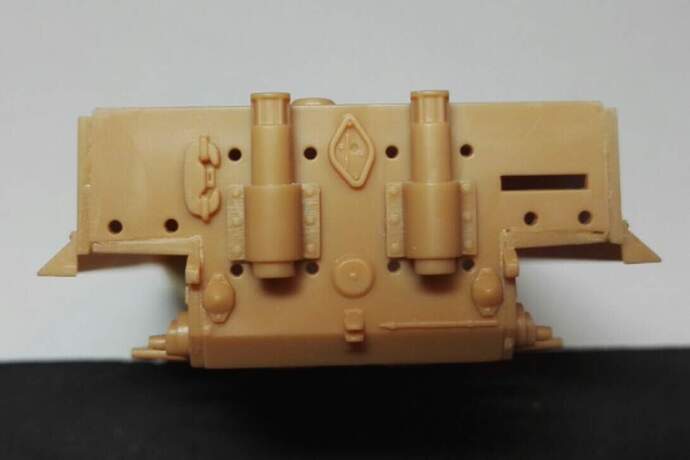 Then the rear track covers, which have also been slimmed down from their oob thickness… More tinkering, which has also stretched to adding weld seams, because otherwise the join just looked like glued plastic. 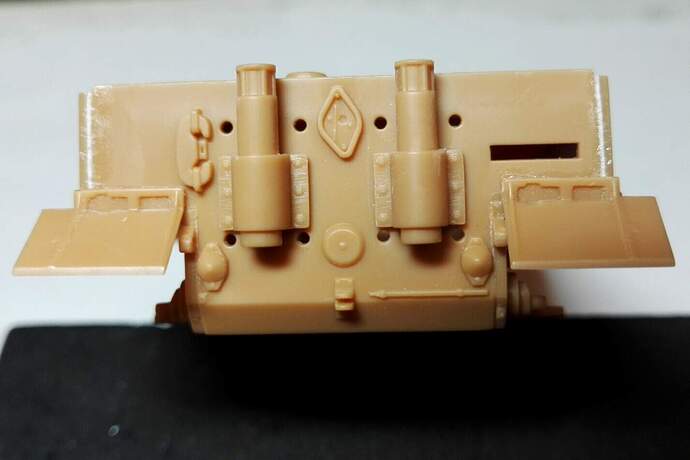 A curiosity is that there’s a machine gun socket with the gun already in that isn’t mentioned in the instructions from what I could see, as well the one you’re instructed to use that has the gun separately. Neither look great, but seems like someone changed their mind during design. You can also see the shiny untextured cables. 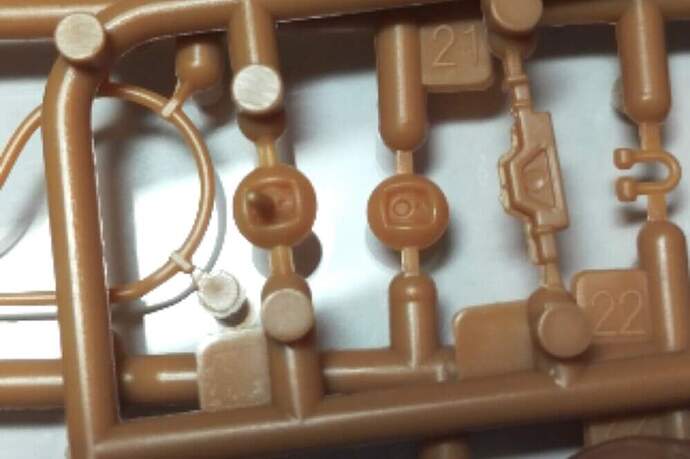 So here is the mg socket in place, as well as the visor, which also didn’t fit too well, needing the locating tab reducing, and the bottom edge needed re-angling so it could sit flush.
Uh… I have really broken my promise now by eliminating the moulded on shovel. It was kind of grating with me and had to go. 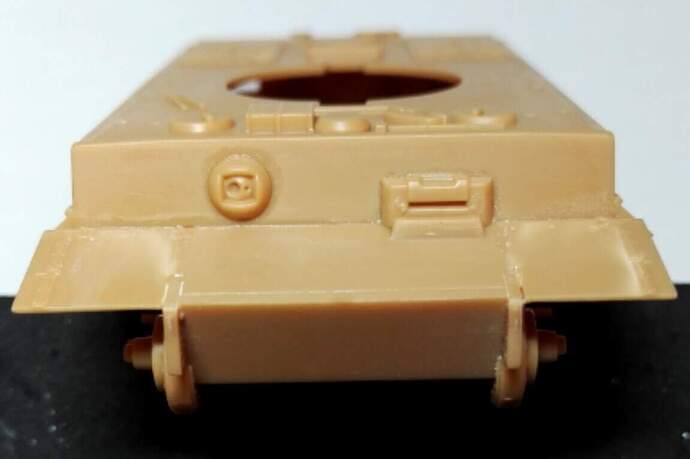 The Hetzer is an Academy kit according to scalemates.

Keep at Matthew, it’s looking good. Your improvements are making a big difference.

Even though the kit is obviously… well… rubbish somehow, you are doing a great job and I am very much looking forward to seeing it painted and weathered. That can make even this one shine, I guess…

Thanks both of you. Yes, a surprisingly poor kit, not recommended at all. I had been looking forward to receiving it, but disappointing in all areas actually. Some compromised and inaccurate minor details would be one thing, but overall incorrectitude, low quality moulding and parts not really fitting together is not something I’d expected from a new kit.

Let’s see if it ends up looking a bit like a Tiger I.

Matthew, you’re doing an admirable job, but this whole kit looks like it’s been sitting on a dashboard in the hot sun for too long!