Discover the characteristics of weathering pencils for modeling, from their manufacture to their different uses. 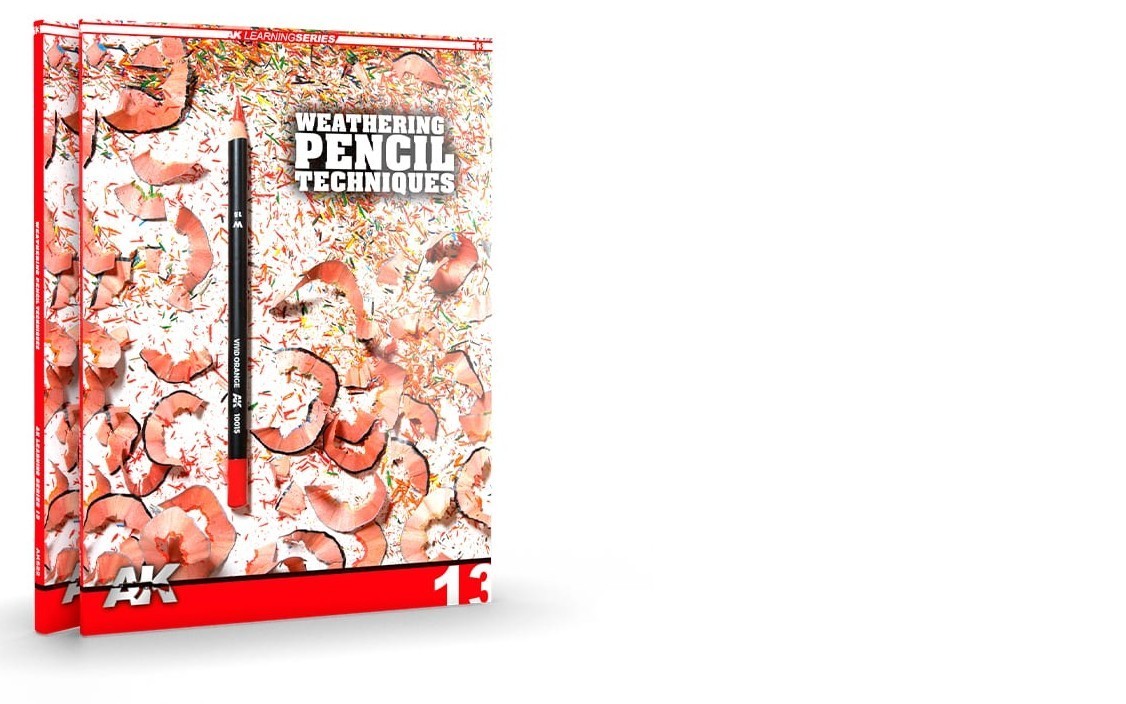 I bought the big set of these pencils, 37 included, for $75. I expected results similar to those illustrated in this book. After extensive attempts, I was sorely disappointed. Even on matte surfaces, the pencils left a faint, greasy mark, or no mark at all. No matter what I tried, I found the AK pencils to be completely worthless. I did get them to do some streaking effects, which oil paints are better and easier at. After many failures I put the box of AK pencils in the back of a drawer, feeling ripped off, and went back to using Prismacolor Premier colored pencils, which give wonderful results at a fraction of the price. 90% Cool Grey for chipping effects is outstanding. I would like to know if I was doing something wrong with the AK pencils or if others have experienced similar results.

Probably you have already seen them, but just in case, the official AK videos for the weathering pencils should be helpful:

In any case, I do not think they are intended for chipping but other types of effects…

In any case, I do not think they are intended for chipping but other types of effects…

There is one pencil labeled “Chipping Color”.

Yes, but I am sure there are better options for that. A flat base is important, also.

I think they require some practice, as I have not had time enough for that, my results haven`t been stellar so far. One of those things you think you have to learn some day

I would like to know if I was doing something wrong with the AK pencils or if others have experienced similar results.

I have not tried it extensively but my few attempts left me feeling the same way but I had chalked it up to user error and inexperience.

@SSGToms and @Tank_1812 Ive had the same experience as both of you as well… I thought it was user error as well.

I tried out and experimented with these pencils for weeks on several different models, following the AK videos, trying to get them to work. I tried all the colors. All of them failed. Now with others testimony I’m more convinced it wasn’t me. Perhaps that is what AK was hoping for, that everyone would just think that they were doing something wrong and just put them away. I’ve checked with some guys in my club and they all say the same thing too. My conclusion is that AK Weathering Pencils are a sham and AK should be called out on it. Warning: Does not perform as advertised!

Warning: Does not perform as advertised!

I wasn’t really even that convinced by the AK videos above. Wet, they seemed to do something, but dry, it was a bit hard to see much. However, these are presumably pretty much the same as artists’ watercolour pencils, which, even for the top brands, are a lot cheaper than these (less than half the cost). I guess it’s about the colour choices, though in the big watercolour pencil sets there look to be a lot of useable shades.
Interesting to read Amazon reviews - mixed between love and unimpressed. Always love the reviews like this : “I have not tried them yet but I am very happy with them”

That’s nice for them isn’t it? Useless for everyone else.

OK. I’m glad I’m not the only one. I bought the whole set as well, based on some decent scratches I made with one pencil on a light-colored forklift. I have tried to use them on several models now, and my results have been the same – disappointing. I keep thinking it’s the base color or my technique or something. I have to wonder. They seem to show a lot of rusting techniques in their videos, and for whatever reason, the rust pencils do seem to “flow” better and perform better when wet. But other pencils barely leave a mark, even when wet. I would say the best results are “subtle,” and I want that, but it is a struggle to get the look you want. I went back to my good old Abteilung pigments and got the look I wanted in half the time. Maybe it’s me. I can’t get washes to work worth a damn, either.

They don’t make a smaller “starter” set to try out? That’s an expensive way to try a product for the first time.

Yes, they make 5 pencil “rust” and “dust” sets but like the modelingmaniac I am I decided I had to have them all. And yes, I feel like a huge fool. I shift between utter disbelief and rage at AK.

Yep, first round is on me.