Does anyone have an opinion on which paint line is most user friendly and accurate? I plan on picking up a few kits for future builds, primarily WWII RAF early. Both paint lines odder kits for this period. Opinions are most welcome Thanks

I use the Vallejo lines for all my paint. I will admit, I don’t do much painting as I am more of a builder, but I have had good success with Vallejo. I know some people don’t like Vallejo, but I am a fan.

Vallejo AIR most modelers I’ve spoken with have problems with it clogging the airbrush.

AK 3rd Generation is said to be easier to airbrush and no clogging with their AK Thinner. I used it for brush painting and it’s not as fluid and does leave some brush marks if not careful. It’s often thicker than Vallejo and needs AK Thinner, meaning you’ll use more paint to spread AK paints around. AK 3rd Generation does make accurate military colors compared to Vallejo. It doesn’t shake well in the bottle due to its thicker viscosity. However, AK 3rd Generation may be tougher…there are online YouTube videos that say AK 3rd Gen paints are the toughest paints that you can buy and will take abusive handling and touching over the years.

So in the end, it depends on what you want to paint and the accuracy of the colors. I’d avoid Vallejo AIR…doesn’t take well to their airbrush thinner and clogs into a gummy ball unless you use Windex to rinse it all out.

Acrylic AK and Vallejo Model Color are the same stuff,they spray nice,but you need their thinner and flow improver.

I heard that Valkejo Model Air can be tough to deal with.

I’m afraid I haven’t had a lot of luck with Vallejo, but I’m very much liking AK paints. Just have to use the correct thinners for which variety of AK paint you use. Can’t use the same thinner for AK Real Colors and AK Air, but once that’s sorted, they both work great.

I don’t know if I’m just lucky, but I’ve never had any clogging issues with Vallejo. Either the Modelair or regular bottles. Can’t say about AK. I have a couple of theirs but haven’t tried them yet.
Tamiya on the other hand, blech! Stinks and clogs everytime I try it. Everyone seems to have different experiences. The cool thing about modelling now is the variety of paints. Try a few and see what works best for you.

Only issue I have with Vallejo Modelair is colour accuracy for RAF. I haven’t found anything that looks right for early wartime RAF dark earth and dark green. Revell dark earth and bronze green are spot on though. VERY thick but thin and spray well.

@phantom_phanatic Most of the time spraying Tamiya, you need their Flat Base…it’s a trick a Gundam modeler taught me.

Tamiya paints dry midair from the airbrush nozzle, said the Gundam modeler, which is why you get the sandpaper effect on the kit and Tamiya clogs the nozzle. Tamiya Flat Base prevents this so you need to mix the two…kind of a trick that you have to buy two bottles to spray one Tamiya color.

I thin Tamiya with regular lacquer thinner never had a problem spraying it and low odor.

I didnt have sucess using their acrylic thinner or alcohol

That’s what I was finding. It evaporates before it hits the model! I’ve had the same problem with that other Japanese paint. Gunze is it?

When the weather gets better I’ll have to give that trick a try (have to do my airbrushing outside). They do seem to have the most accurate Japanese Navy and Army colours and I have a few of those aircraft in the stash. Vallejo worked for me from day one and I like the massive range of colours! Before that I was a strict Humbrol man so I’m still in the process of converting a lot of colours.

I think we must call lacquer thinner something different in the UK, because I can’t find anything called that here! I know turps doesn’t work with the stuff.

I use Mr Leveling Thinner and Tamiya’s retarder.

I use Vallejo’s retarder when spraying Vallejo colors but found you must primer first, Tamiya colors not so much.

I googled it,and this seems to be the answer I got the most

What is lacquer thinner UK?

Lacquer thinner, also known as cellulose thinner, is usually a mixture of solvents able to dissolve a number of different resins or plastics used in modern lacquer.

Oh that stuff. Got to be honest, I’ve always been wary of having cellulose thinner anywhere near after that time I dissolved a canopy by accident. But that’s a story for another thread.

Mystery solved though, thanks.

AK all the way … RC range is outstanding

AK Real all the way!
Go big and buy the wooden box.

I’m going to assume that you only need a few small drops? I wouldn’t want a project to end up looking like a scene from Alien!

Yes,the same as any other thinner.

I use this from Halfords for my AK RC 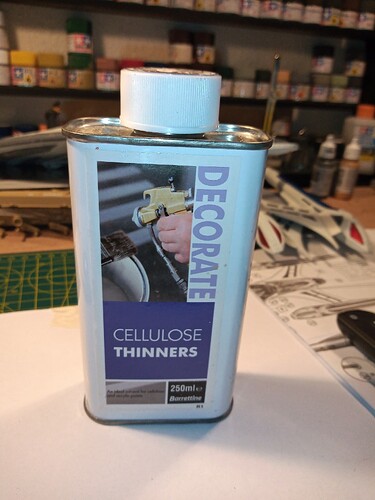 Mixed with the AK in the usual amount, I normally do from 40 to 50 split on the mix. I also chuck in about 5 or 7 drops of the Tamiya lacquer thinner retarder 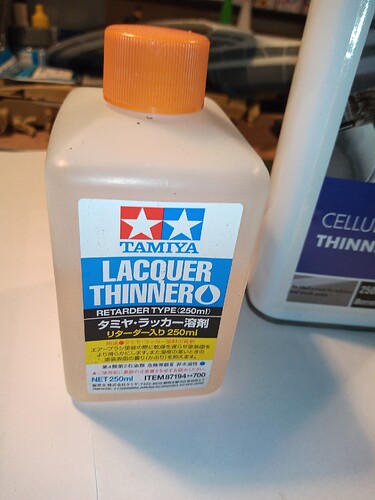 My two cents: Have not had a problem spraying or brushing AK 3rd Gen Paints - so long as you use their thinner! And maybe a drop or two of their retarder. I do find cleaning the airbrush afterwards is a bit more of an effort than Tamiya. But just a bit.

It doesn’t shake well in the bottle due to its thicker viscosity.

Yep, been there. To solve this I plop a ball bearing into each jar - it helps a lot.

Thanks, I’ll give it a bash when I can and see how I get on.