Hi all
I’ve decided to challenge myself with a parallel build of the 3 kits of AMX 13 remaining in my stash. 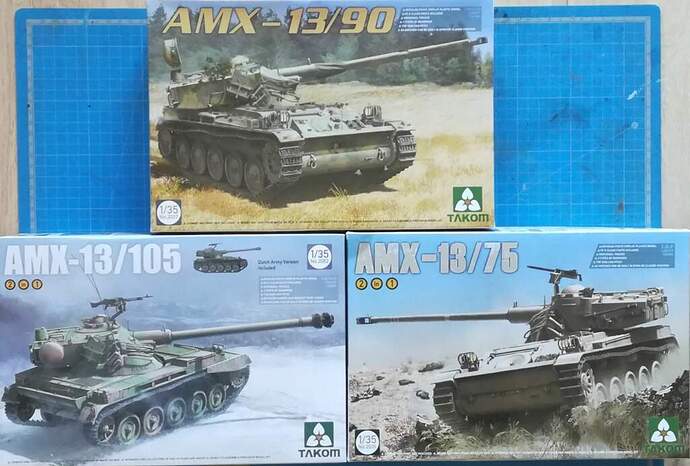 With a little help of useful documentation and personal pictures of course. 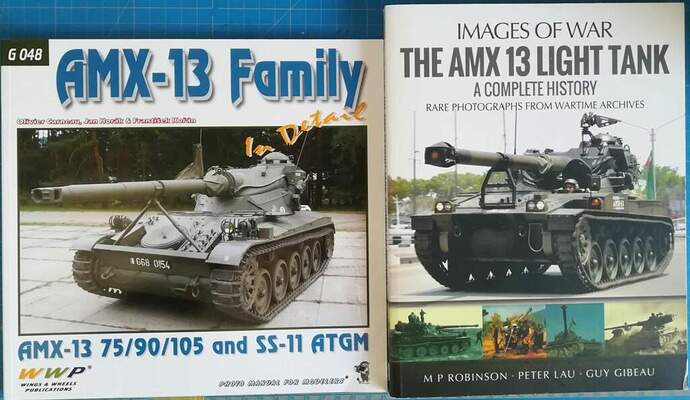 The IDF AMX 13 will be modified with the single headlights and the appropriate guards, the turret raiser, the rear deck grilles protections and the bolted roadwheels. In addition I won’t use the front mudguard which means that I need to fill the various holes in the glacis.

The French AMX 13 90 hopefully will be out of the box. The only point of attention is the markings which are not correct. This should not be a big deal though.

Sounds like a great thread! Looking forward to Team AMX!

Building three variations of one tank at the same time, nice!

This looks sweet! Defiantly following along.

If you don’t already have them, I strongly recommend adding Peter Lau’s 2 volume set of books to your references as well. Available as E-books or print-on-demand from Lulu.

These are much more geared towards modellers and highlight the differences between all the series very well. And not really much overlap with the Images at War book he co-wrote.

Jon
I have them as well but couldn’t show a picture of the covers.

Cool! I’ll follow this thread with interest, having almost finished the Tamiya kit.
You may well already be aware of this, but the Dutch version with the markings as supplied in the box, also had armoured antenna bases. I don’t think Takom has those in the box. 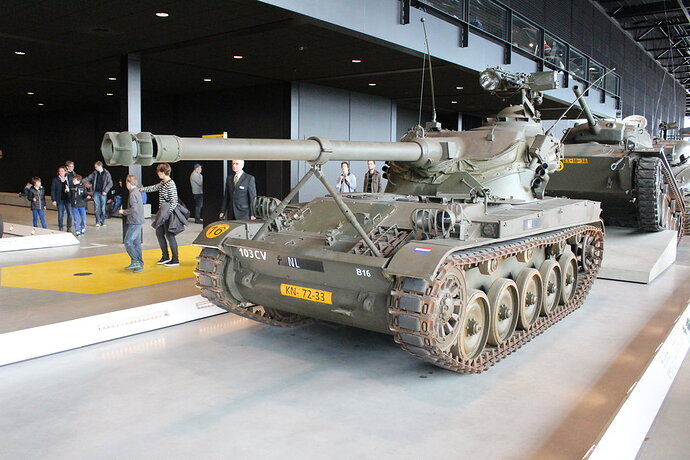 Jay
Unfortunately there are more other details that Takom omitted. I had the opportunity to take pictures and measurements of them on the tank preserved at Saumur.

I am courious about how the increasing weight of the larger guntubes effected the chassis and handleing.

To be honest I can’t answer the question for the 105 gun. However the 90 mm was not a lot heavier than the 75 one because it was just a 75 mm gun which was “rebored” to 90 mm. The addition of the thermal sleeve should not have increased the total weight by more than some kilograms.

@Bison126 is the one at Saumur a Dutch version? The Dutch have a tendency to change and add some stuff to their vehicles. As soon as Covid permits, I’m planning another trip (since it’s only about an hour from where I live) to the NMM (Nationaal Militair Museum) where the one “from the kit” is preserved. Depending on how much of a rush you are in, I might be able to take some pics of any details you may need.

@TopSmith Having spoken to some people that served on the AMX-13 with the 105 in Dutch service, a few of them mentioned that the 105 led to some issues with metal fatigue in the turret. Not so much because of the weight, but because of the increased forces when the 105 fired, compared to the 75 it was originally designed for.
Now whether or not this is true, I couldn’t tell you. On the one hand it sounds plausible, on the other hand I don’t imagine a tank gun getting fired so often that it causes metal to crack (outside of a war zone).
Also, I can’t find any official information on this issue.

Saumur tank is a former Dutch one. As I can visit the museum quite easily I already have taken useful details pictures as well as measurements. But I appreciate your proposal. More pictures can’t do any harm.
The Dutch tank proposed by Takom is not correct because many Dutch features and not only the armored antenna bases are not included. Most of them if not all are on the turret.

@Bison126 I have to admit that I was not expecting a French Museum to have an ex-Dutch French made tank.

Jay
the problem is that you can never be 100% sure the tank really comes from the country it is supposed to have served in. For instance Saumur museum displays a “fake” Israeli AMX 13.

Here are the first pictures.
First of all this a copy of the instructions. In red the details to delete… Note the studs on the ventilator dome are only present on the IDF variant. The 90 mm gun version will require to add a lot of missing details. In blue the details to move. In yellow do not cut the gunner’s hatch as required by Takom. 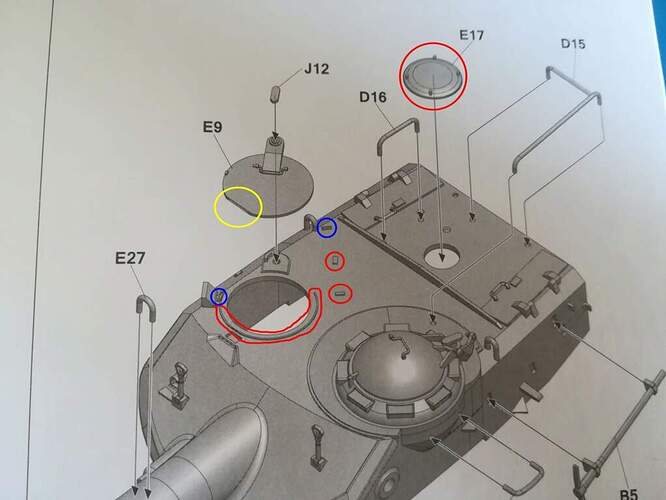 For those who would build the turret without the dust cover a ugly seam would need some attention. 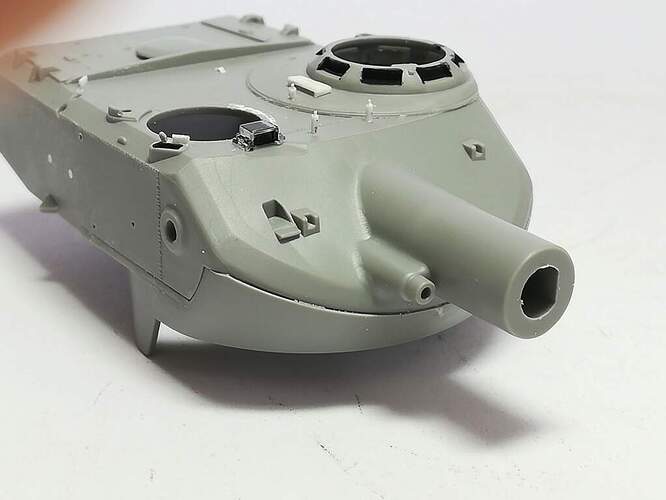 On the left the IDF turret. On the right the 90 mm gun turret. Soryr for not having started the 105 mm gun turret yet. 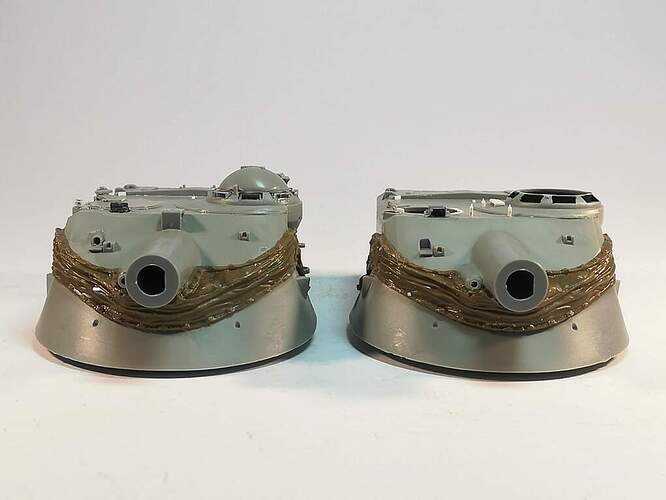 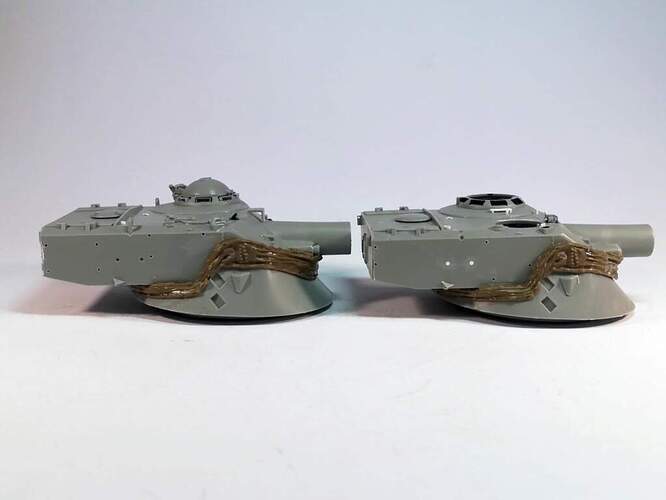 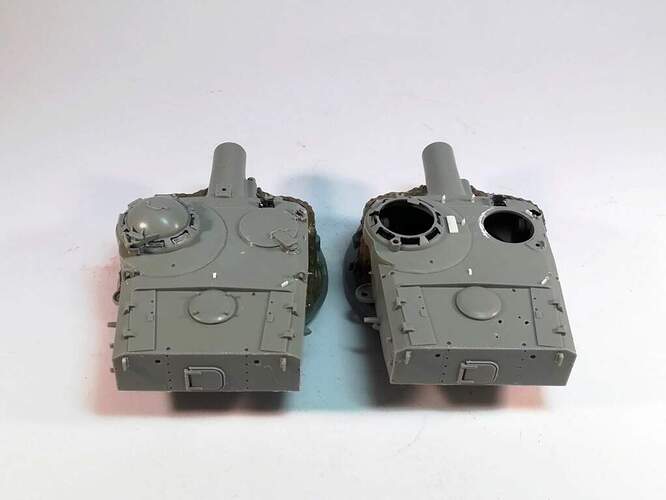 Under the bustle you need to scribe the panel edges. 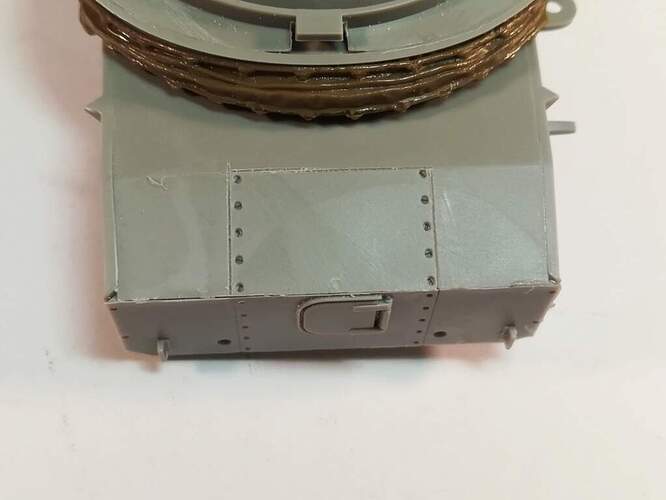 On the left under the bustle the dust cover has been glued at the bottom and at the top which results in the gun being elevated. On the right here is the existing gap if you intend to set the gun horizontal. 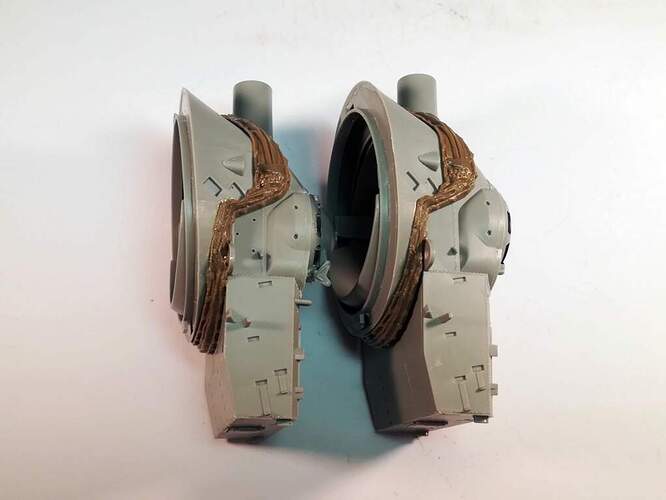 Nice to have you on board Robbie.
I guess you are aware that the Takom kit can’t be built into an accurate IDF tank from the box. While Takom gives some specific parts, some are missing like the bolted roadwheels, the early long legs for the gun travel lock and the early auxiliary sights. For the rest, you need to source period pictures and decide which tank you want to depict as there are several possible variations according to the time frame.

Are there after market pieces to correct this?

Apart from Accurate Armour and Azimut full conversions (and I don’t believe any of them provide the auxiliary sights and the long legs), I don’t know of specific AM parts.
I also omitted to say the IDF AMX 13 all had the single headlight set-up.

I worked on the FL12 turret with the 105 mm gun. I finally opted for the Argentinian version. There is too much to do a correct Dutch turret. Like for the other turrets I added some missing details. Will you be able to spot them all? 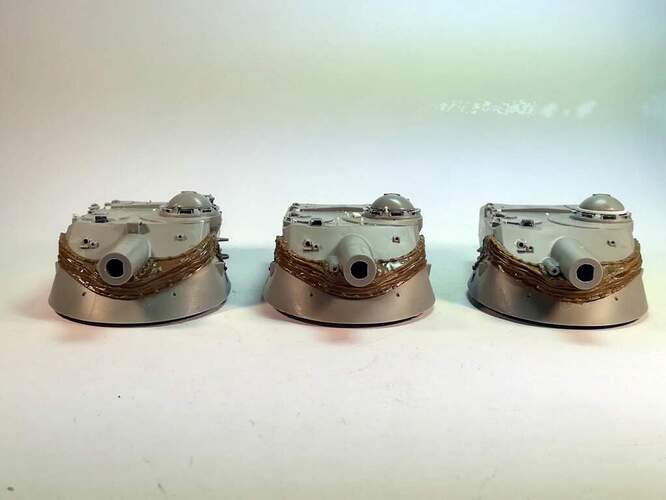 On the FL12 turret there is a ring mount for a close defense MG. Takom gives the mount and the MAG58 but no ring mount. A strip of styrene can od the trick. 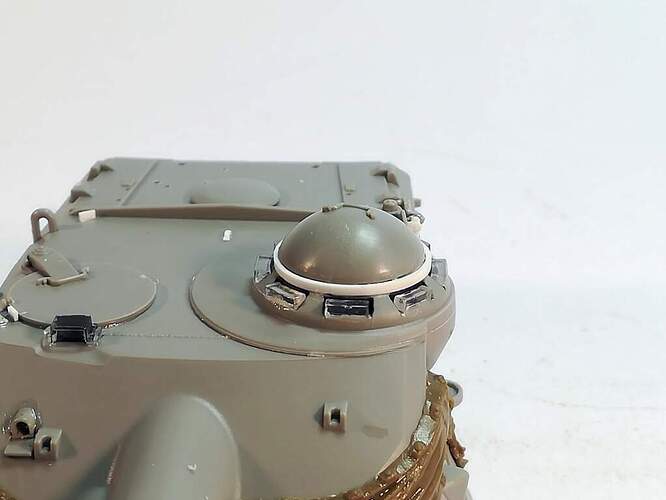 Then you have to redo the hatch lock as the original one position (at the front) prevented the ring from rotating. 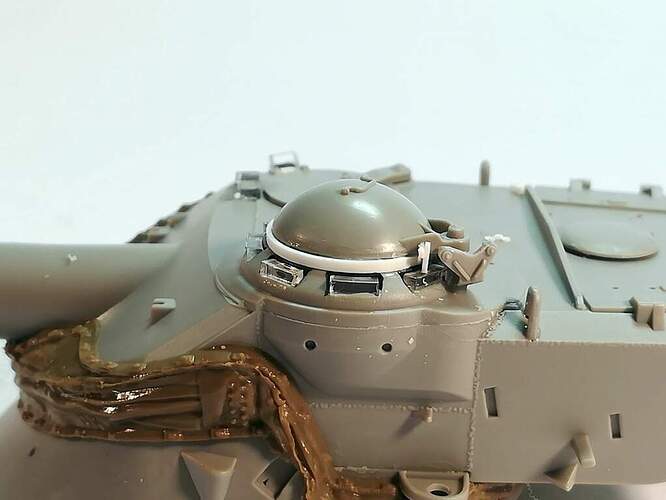 As seen on the picture the turret bustle of the FL12 turret is modified to cope with the greater recoil of the 105 mm gun. 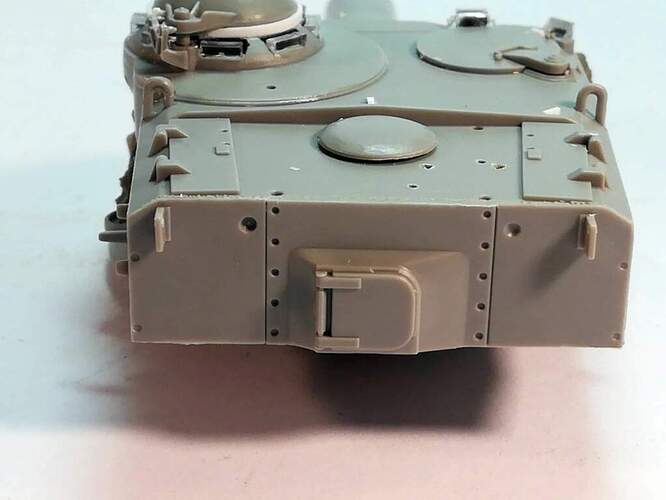 Among the added details there are the fixings for the antennas shrouds. One is on the roof and the other two are each on the little square plates on the bustle sides. 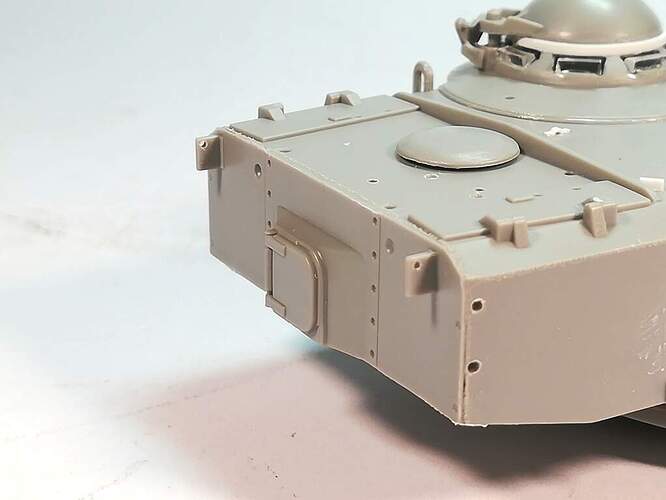 A little example of the subtleties about the AMX 13 is the coax MG outlet. The Israelis extended it (probably because they replaced the French MAC31 MG with a cal .30 MG). This is how Takom depicts the outlet. 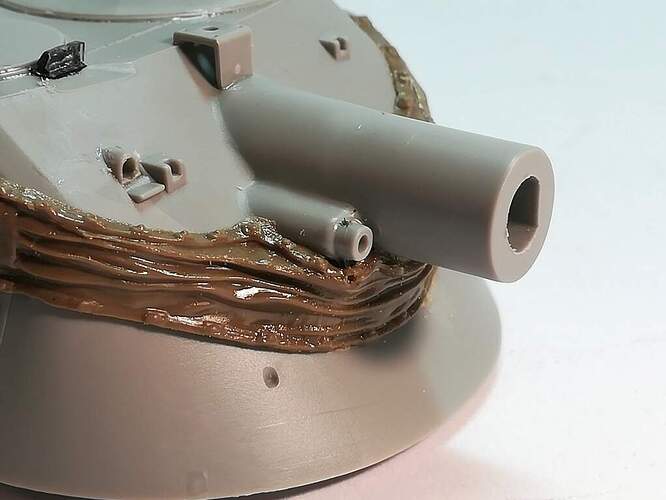 The French outlet was either without an extension or with a small one like in the picture. 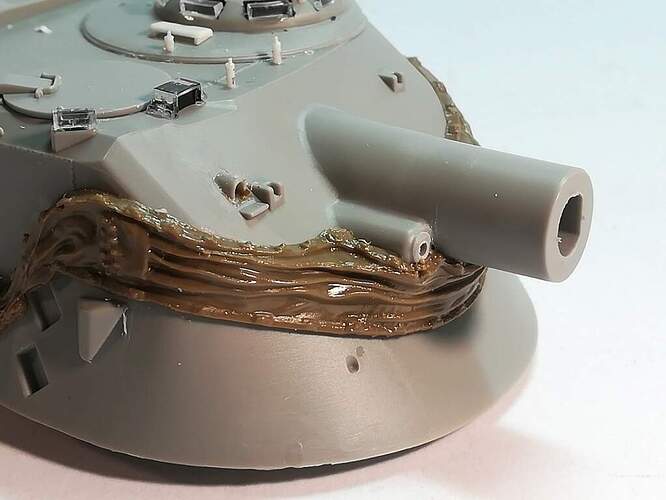 Concerning the Argentinian outlet it had an intermediate size extension. And the Dutch adopted a different one. 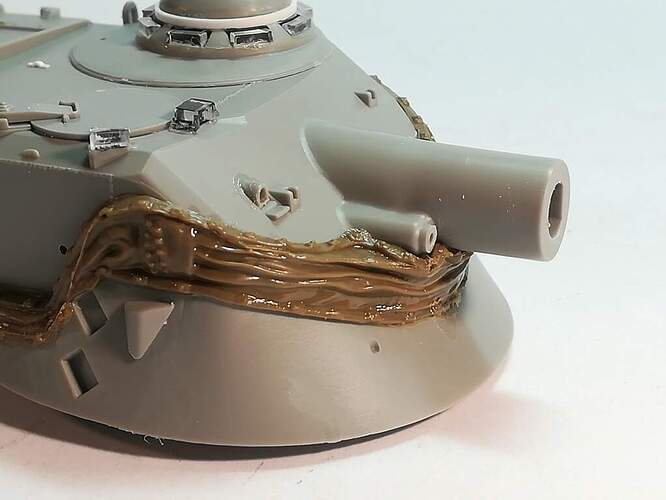 None othe turrets is finished yet. There are many parts to add and some to modify like the early auxiliary sights for the IDF tank.
Olivier