Any Canadian members have a source for Gator Glue?

As the title states I am looking for Gator’s grip thin blend glue in Canada. I’ve found plenty of places in the states that have it but none will ship internationally. I have started building more PE, I like BSI gel type super glue for the larger easier to place parts but it sets far too fast for smaller parts that need adjustment

To thin either product out, just use a little water to make it the consistency you want.

BTW, the acrylic gel medium can also be used to make water and ice effects in addition to working as an adhesive. For example, you can make really nice icicles by dipping a piece of clear stretched sprue or sewing thread into the stuff repeatedly like dipping a candle in wax.

Is this what I am looking for? 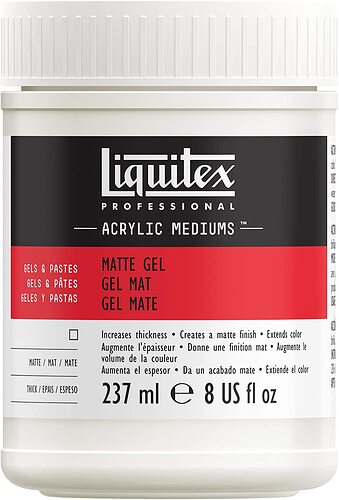 The matt would probably work just fine, but not so good on clear parts.

FWIW, I use the acrylic matt medium (liquid not gel) as a light-duty adhesive and an additive for thinning acrylic, water-based paints.

I should also mention that there are entire series of TEXTURED acrylic gel mediums that work really well for added 3D weathering textures - mud and soil - to models.

Cheers! They also have the gloss. This is a life saver I had been holding off attaching some of the fiddly PE to my recent build till I found this as I often found that super glue would dry instant

Good to go, then!

Sounds like you’re familiar with the properties of the Gator’s Grip glue, so you won’t find any surprises with the acrylic gel medium. Just like Gator’s Grip, it only reaches full strength after overnight drying. Excess and squeeze-out will clean up exactly the same with just a water-damp brush. It dries clear as glass.

For water and ice effects, I’ve found that after allowing it to dry hard over a few days, it will benefit from a coat of something like Future or another clear gloss acrylic paint. That will add a hard surface to it that will resist dust or finger prints.

However, as an adhesive, I just paint over it like normal. No problems with either acrylics, enamels, lacquers or oil paints over it after it’s dried.

Fantastic thanks a bunch. Do I just thin this stuff with a bit of water, paint it on with an old brush, and then place the part and position it, then let dry over night?

For PE, I don’t thin it at all. I use it straight and then just cleanup any squeeze out on the edges with a water-damp brush. Do, indeed, let it dry overnight, though.

You can thin it, though, if you think you need to. Keep in mind that just like some other glues, like white glue / PVA, the strength of the joint is a combination of the surface area and the mass of the dried glue. So, for example, I might thin it out (with ordinary water) to let the glue run into a joint (like around a clear part). I’ll allow that to dry hard, then go back and add more later to strengthen the joint and fill the gap.

Thanks a bunch! I was stalled out in my t-54 build with some PE i was waiting to place until I had something better than CA!

Thanks again for this tip. It just arrived and I used it to glue some vision ports in place. I was very skeptical at first as the bond seemed very week but after about 30 mins it dried to a solid crystal clear bond

It usually takes overnight for the bond to reach full strength.