Hi all, I’ve begun an ambitious project to build a King Tiger II from Panzer Abt. 506 during September of 1944. My inspiration comes from a painting I saw of King Tigers crossing the Arnhem Bridge under the watch of the 10th SS late in the battle of Arnhem. After two days here is where im at so far on this project.
The kit I’m using is Dragons Premium King Tiger 6312, the kit so far hasn’t been an issue but it’s still early in the build. My plan for the build will be to show part of the Arnhem bridge span with a captured Willy’s jeep and a few soldiers watching the tanks roll by. I’ve even though of adding some British airborne troopers from the mini art kit A Bridge Too Far that have been captured but feel like this wouldn’t be accurate. 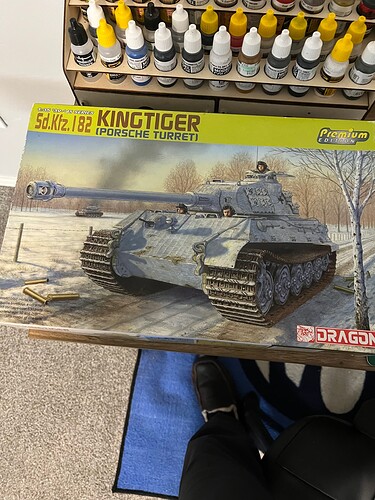 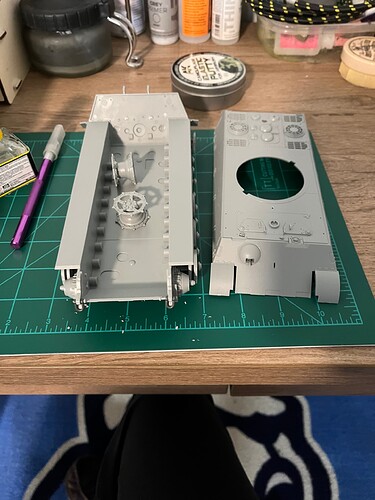 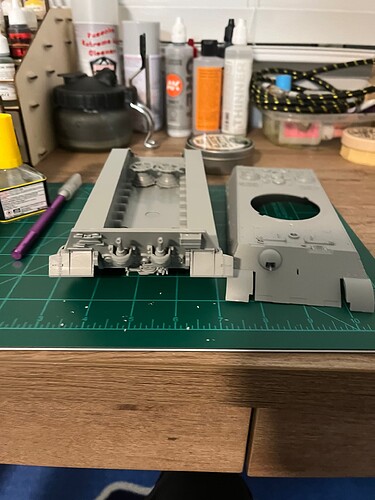 Was the Tiger II with the Porche turret used in the Battle of The Bulge? I don’t think so. Nice project, keep going, but be historically correct.

@Gustav this is a build for the battle of Arnhem not the bulge. Read the bloody title next time and for your education it is historically correct, the Tigers were brought into Arnhem towards the end of battle and fought in oosterbeck. If you don’t know, which it appears you don’t, there’s actually a tiger that was destroyed on the British perimeter in oosterbeck. Now because it sounds like you are ignorant on the history of the battle I’ve attached a link below for your education.

Also it’d be real awkward for Dragon models and other model companies to release a kit with markings for a distinct unit and battle without researching it before hand. 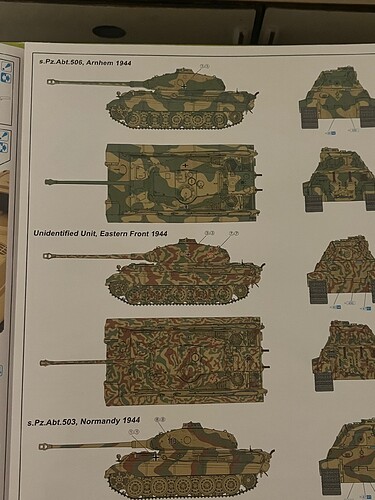 The tigers were attached to the 9th and 10th SS divisions to counter market garden.

Ah, yes, you are correct. I got confused with the Bulge. Very sorry for ruffling your feathers.

The tiger knocked out at oosterbek had a production/henschel turret. And the Tigers in the painting appear to be the same without the distinctive turret bulge of “Porsche” turrets. The third one along looks like a jagdtiger with its taller profile compared to the first 2 tanks but that could just be dodgy perspective by the artist.

That being said, 506 seem to have had a mix of turrets types at Arnhem so happy days!!

Also it’d be real awkward for Dragon models and other model companies to release a kit with markings for a distinct unit and battle without researching it before hand.

Unfortunately, model companies have a bad habit of doing just that!
It is always best to do some research on the subject you wish to replicate, and you seem to have done a good job of it. Personally, I always liked the look of the rounded turret.
Ken

@Chepster yes that is correct they fell in on both types of turrets in August i believe. I thought the oosterbeck Tiger was a Porsche Tiger i remember this forum when I was tankluvr on finescale,

@tankerken i generally haven’t had any issues from Dragon when it comes to markings. But yes i do have a few kits where i scratch my head and say that doesn’t sound right. For instance my miniart Daimler that has the captured markings is said to have been used by the 503 heavy tank battalion in Normandy but all the reference I have don’t show this. The closest unit to have used a captured one was Michael Whittmanns, even has a photo of him riding in front of a Tiger.

My follow on question for everyone is do you think that the Tigers had a mix of a few being coated with zimmeritt and some being coated without it? The Oosterbeek photo appears to show the tank without the zimmerit coating but I’m not quite sure anymore.

Well for what it’s worth this operation-Arnhem in late September falls right after the coating was discontinued as a factory add and right before the field order discontinuing it’s application (the order was issued in early October 44). Now the field order was often ignored so I think if you opt out you wouldn’t be in the wrong at all if one were to assume your particular Tiger rolled off the line around the time the factory application wrapped up.

I won’t claim to know for a fact that the one you are doing falls into this but rember turret numbers were assigned at the unit so I think if you went sans zimmeritt it’s entirely plausible and well within the timeline so I say do it your way and have fun.

@MontanaHunter thank you for that information, now I’m aware that the 506 picked there tigers up between 20 August and 12 September so i suppose that either is plausible like you said. Maybe I’ll give it the old college try and see how it looks, i already have a zimmerit roller on the way from trumpeter so I’m dying to put it to the test. I would also say that the paint instructions show it with zimmerit as well as dragon did release a zimmerit kit with the 506 markings at Arnhem.

I’m about ready to give it a try too, have the same Trumpeter set. Seems to be the best set of tools I saw but man, trying to find them in stock was a several months search (which I guess attests to their quality). I’m going the old Milliput route, seems to be the most workable approach but I’m going to do some scrap styrene trials before I burn one of my nicer kits were applying it will be a big plus. Just nervous to try a kit as the first go since I could be wrong on the best stuff to use.

Glad I could give you some useful info, good luck on your build. I’ll watch for updates.

@MontanaHunter i found the set today on eBay should be here by Wednesday. I watched a few YouTube videos on how to apply zimmerit. I really liked the Elmer wood paste one but also think milput could be the other way to go. I have to see what putty i can get at hobby lobby this week if i chose an alternate approach.

I have Mr white putty do you think that could work at all?

I’ve seen wood putty and Milliput used or mentioned most frequently and I believe it’s for the following reasons-unlike filler putty neither is as ‘stringy’ and sticky, the wood filler and Milliput w a dash of water won’t clog your tools and give you a more workable surface.

Now I know guys have used Green Stuff. Tamiya etc but from my experience you’ll have to let them set up before you try to imprint so there’s an X factor. Too early and you’ll mess up the Trumpeter tools.

I’m inclined to stick w Milliput. I’ve found where I live w no low humidity that when doing woodworking I have a very fine line of usability w the wood filler. Too much dries quickly on my and starts to set up and get flaky and grainy on me. Obviously that more environmental so if you live where the humidity is higher it may be very viable (I’m in Montana in Billings and I was surprised how low pur humidity is, makes one pay attention airbrushing also).

@MontanaHunter i never gave the humidity much thought, I’m usually in Georgia but will be in Arizona for a few months for work. I think I’m going to use the wood filler, it’s still somewhat warm here and will begin cooking soon. I feel if i do it in small increments it’ll work.

Also check out night shifts zimmerit video, he does a hell of a job on a Tiger I and it taught me a lot. I’m going to get some resin styrene this week so i can give the vehicle tools a surface to sit on, he goes over it in his video, he covers all the holes for the vehicle equipment with a piece of styrene that is raised to the same height as the zimmerit so it doesn’t look off.

As it is the “Porsche” turret variant, I would expect it to have zimmerit, as they were earlier production while the order was still in place.

This may offer some more insight

"Henschel won the design contract, and all Tiger IIs were produced by the firm.Two turret designs were used in production vehicles. The initial design is often misleadingly called the “Porsche” turret due to the misbelief that it was designed by Porsche for their [Tiger II] prototype; in fact it was the initial Krupp design for both prototypes. This turret had a rounded front and steeply sloped sides, with a difficult-to-manufacture curved bulge on the turret’s left side to accommodate the commander’s cupola. Fifty early turrets were mounted to Henschel hulls and used in action. In December 1943 the more common “production” turret, sometimes erroneously called the “Henschel” turret, was simplified with a significantly thicker flat face (which eliminated the Shot_trap) caused by the curved face of the earlier turret), and less-steeply sloped sides, which avoided the need for a bulge for the commander’s cupola, and added additional room for ammunition storage.

useful for time frames, amount of turrets and whether its yes or no for Zimm … I would go with yes

@Johnnych01 thank you for that, i always wondered why it didn’t win out but now it makes sense. Well this is perfect because i have zimmerit tools in the way, I’ll hopefully have some shots of the hull with a coating of zimmerit on it by the weekend!

glad you found it helpful

All Porsche Turreted Tiger 2s bar the prototypes had zimmerit.

I thought that was the case but didn’t have access to my reference books at the time I posted to verify.