I’m not a kit collector, nor do I have a large stash, maybe 24 kits all needing to see the bench before my time comes. Kits need to be built, as that’s what they were designed for. Many years ago when I was a member of my local IPMS chapter, we had a kit collector who bought up everything he could for years. Well, when his time eventually came, his massive collection was put up for sale and the better kits eventually made it to a few IPMS contests. Unfortunately, none sold for much, some eventually were given away or donated, but the rest went to the recycling center.

IMHO, plastics kits as I said were designed to be built, die cast cars were from the start slated to be collectables. Those plastic kits that have grown in value are few and far between. Most because their molds have long been remelted so they can’t be re-issued. And then their’s the old kits with existing molds that aren’t re-issued as the Corp bean counters just don’t feel that they will turn a profit worth the expense and time taken from molding a better kit. It’s just that simple.

Most because their molds have long been remelted so they can’t be re-issued.

IIRC Revell back engineered their classic 1/48 UH-34 kit to reissue a few years ago after the molds where lost in a train or shipping accident or so the story goes.

Round2 is updating and rereleasing lots of old car kits.

Ryan,
I suppose that the original release would hold some additional value to other collectors, but builders would take a pass and buy the updated and then reissued kit.

Yep all fair points Joel, although I’d suggest the key in your 1st para is “many years ago” i.e. that stash was much younger then, collectability/value increases with age although no doubt still only for the rarities. Agreed that while the mo*lds still exist the only likely extra value would be for original boxings.

Re die-casts I’d draw a sharp distinction between the more recent deliberately marketed “Collectable” types, and the old Dinky/Corgi etc cars especially from the 50’s/60’s that were designed as toys to be played with – it’s the latter I was thinking of. For example, without me knowing about it my mother threw out a bunch of mine over 30 years ago because alas I’d long since left them behind at home. Amongst them was the gold Corgi Bond AM DB5 from 1965 – today in original packaging they’re exchanging hands in the U.K. for up to £500/US$700 and rising in A1 condition. So perhaps any serious collectors’ market for exceptional plastic kits may be 10 or 20 years hence, after a lot of us will have gone to that great workbench in the sky

Tim,
For what it’s worth, sooner then later I’ll be working on a kit at that great workbench in the sky.

I’ve seen several videos about very serious collectors of Dinky/Corgi, and Matchbox toys. One guy actually has the entire run of Matchbox cars in just about mint condition. His proudest piece is the most valuable Matchbox car which I believe was some kind of California Beach van valued at over $5.000.

But on the other hand, I knew this guy who was putting all his money into large scale kits from aircraft to ships claiming that they’ll all be worth many times over what he paid for them. Well, he’s retired, and literally is struggling to sell what he can at prices way less then what he bought them for. The exception seems to be those 1/200 scale ships, but he had only one of each.

I made a start today, assembled the seats (3 parts each) and started going over the main body to remove a bit of flash around the edges and mould lines from the top of each of the 4 quarter panels. 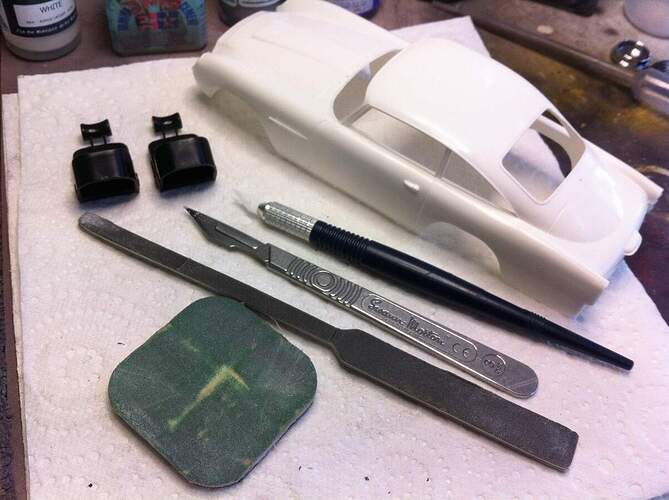 Not much to show, but it’s good to get in amongst the styrene again! 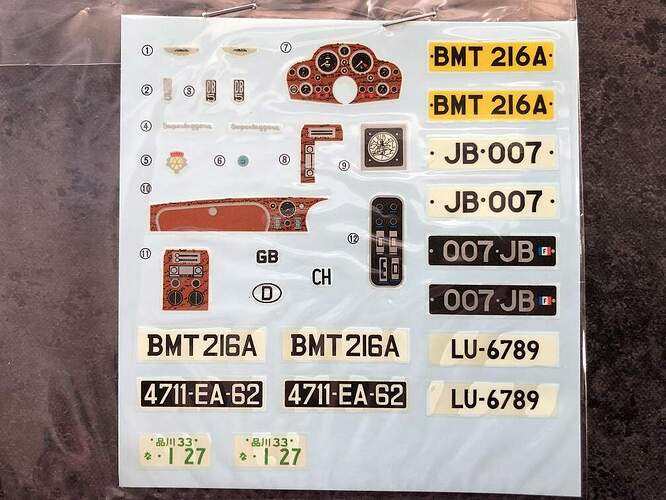 I can’t find a single reference image of a DB5 with a woodgrain dash. They are all black. 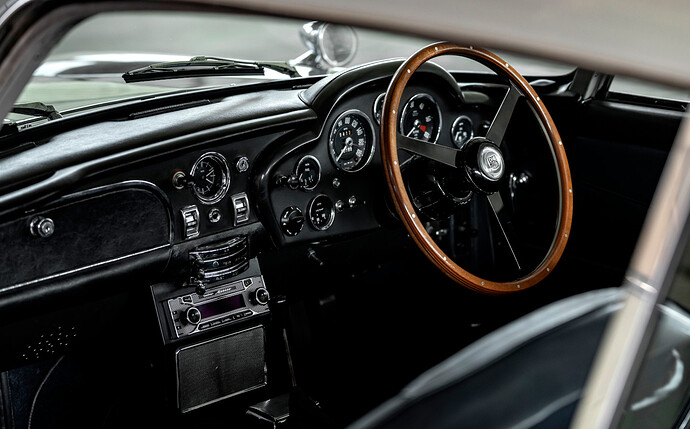 D,
Nice start on those bucket seats. As for the wood grain dash, well they were very prevalent back in the day. I even added one (bought add on kit) for my MGB. I’m guessing the since the decal is the full instrument panel, you might be better off just cutting out the individual Instruments and Bezels, or kit bashing your own.

That is a little odd. Not even the original DB5 from Fireball had wood - it was black as well. However, the metal shroud over the dash was the same as the body color.

As for the wood grain dash, well they were very prevalent back in the day.

My '49 Dodge had “wood grain” door panels and dash. It was in fact painted metal, but the effect was quite good.

The mould seams were very prominent on the top edge of the front and rear quarter panels. 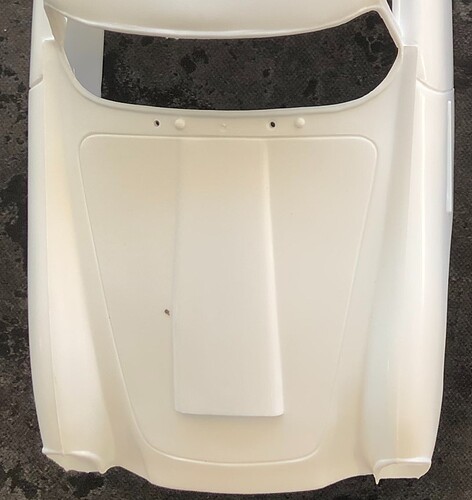 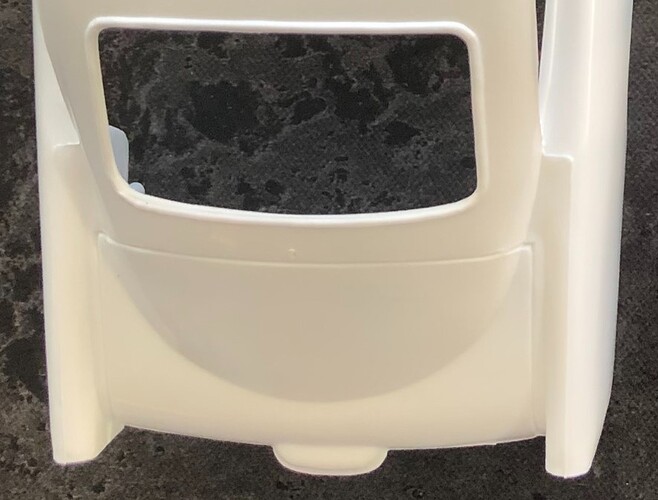 I spent some time with a ceramic scraper, sanding sticks and pads to remove them hopefully without impacting the profile too much, then gave the body a good shot of MS1500 Grey primer to check for imperfections (yes, there will be plenty!). 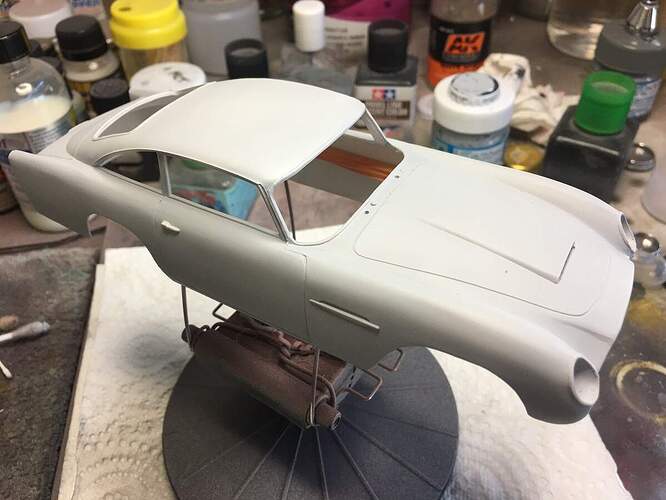 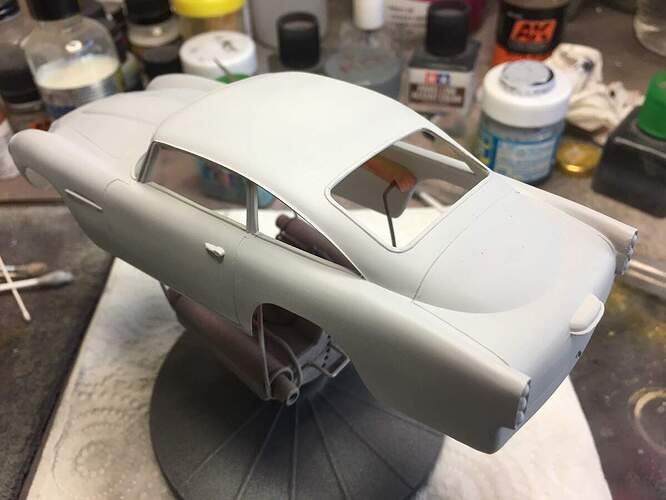 I also shot a pair of plastic spoons with Grey and Black primer to test the Zero Paints Silver Birch on and see which looks best. Once I have the body prep finished I can then re-surface it with my choice of primer colour.

D,
The prep work looks darn good. And since it’s the foundation to the entire paint and finish job, I’m 100% positive that you’ll get it to your usual high standards.

Ok, I gave the primed spoons a light buff with a polishing cloth, then shot 3 light coats of the Zero Silver Birch on each spoon. 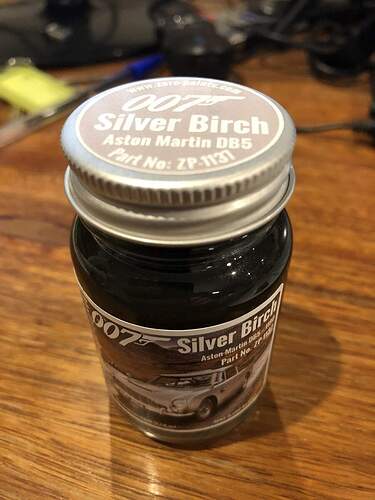 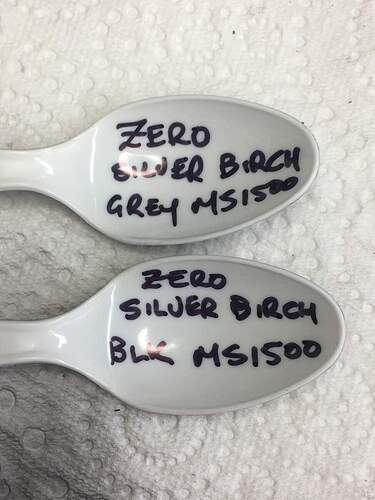 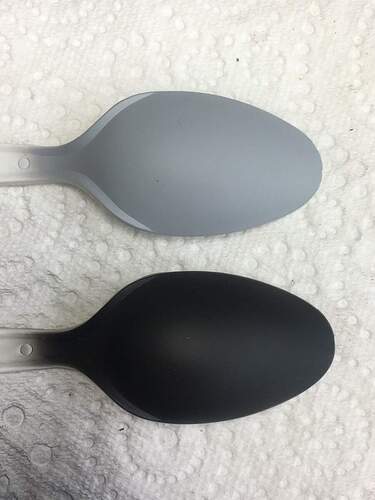 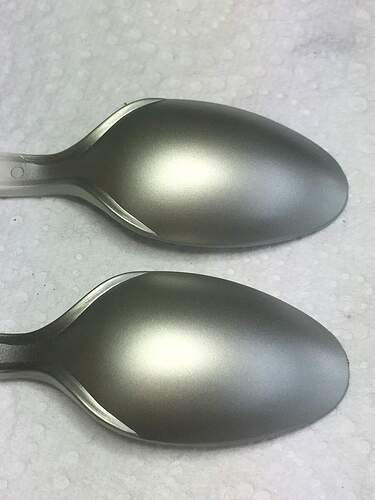 It’s not really visible in the images, and barely discernible to the naked eye, but the Grey primed spoon has a slightly greener tone to it. The black primed spoon is slightly more to the silver side.
After an hour or so I gave each spoon a couple of medium coats of Alclad Aqua Gloss to see if it made any difference to the variation, but it doesn’t appear to. 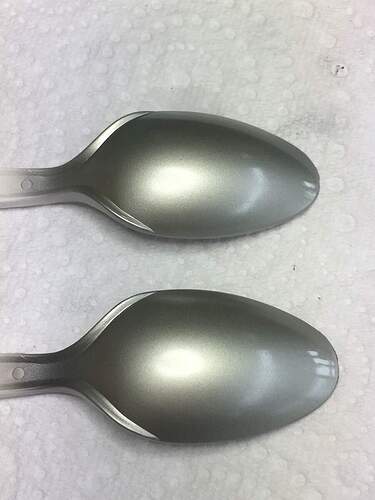 I will keep the spoons beside me on the bench and think about which way I want to go with the primer prior to painting, I like them both.

I also gave the back of the seats a shot of black sprue goo to tidy up the ugly joins. 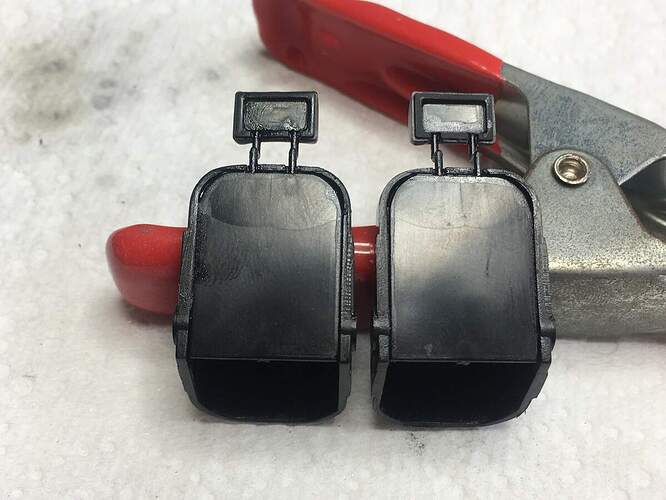 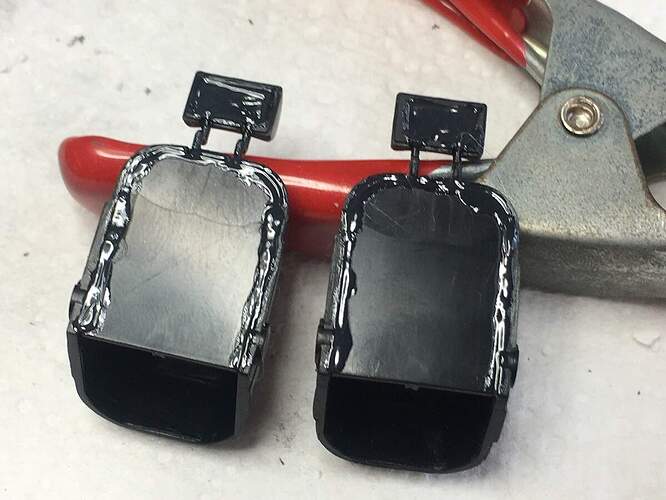 What the fork? I thought you were branching out into cutlery design for a moment. Interesting about the green tinge but how does it/they look in daylight - same?

Interesting. I never heard of sprue goo before. What do the seats look like after sanding?

D,
Just the mention of a Green tint, and I vote for the Black base one.

@Dioramartin - they look very similar in daylight, the difference really is barely visible.

@18bravo - The sprue goo is just old pieces of sprue dissolved in Tamiya Extra Thin. I makes a great filler for seamlines as it bonds to the base material and sands nicely because it is styrene. The downside is that if it is applied thickly (like I did here) it takes a few days to fully cure and can shrink a bit. I will report back and show how it progresses.

@Joel_W - I’m leaning towards the black primer base as well, looking at reference images of the Silver Birch DB5 cars there doesn’t seem to be much of a green undertone at all.

D,
I guess that Great Minds still think a like
joel

Ah. I thought there was some new product I was unaware of. I’ve made that before with plain old
Testors liquid cement, I also like to make it in place. I lay a piece of stretched sprue in the gap and keep touching the cement to it while pressing it down with the flat of a no. 11 blade. After a bit it fills the gap so well there’s often very little sanding needed.