Hi all. Finally got to the stage where this beast is ready for (external) painting! Now all I have to do is decide what I’m going to do next! I think it will be either Tamiya or a simple truck! 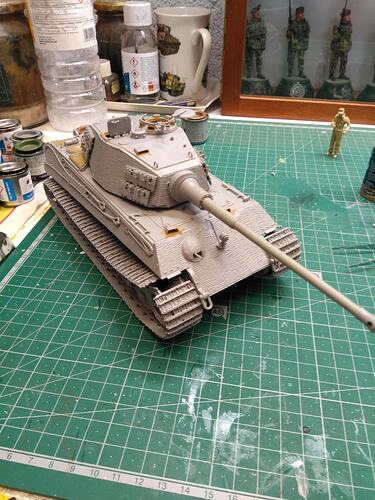 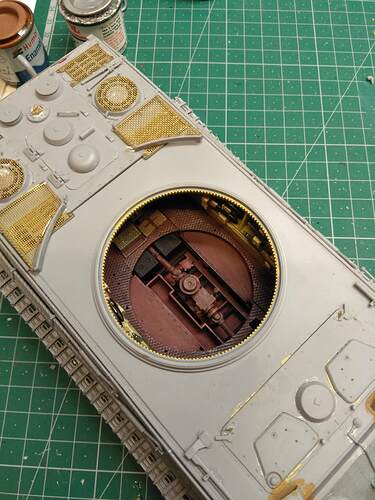 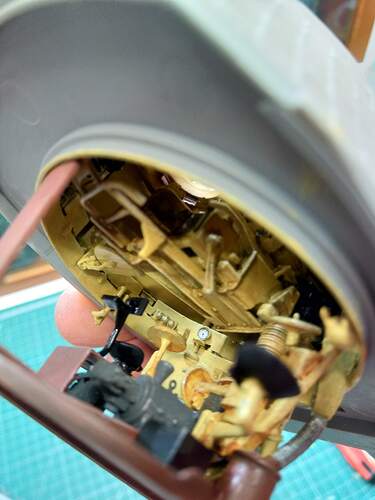 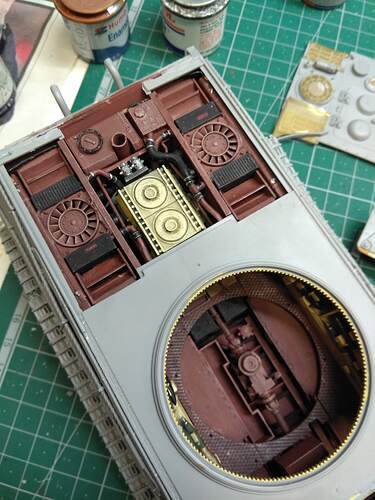 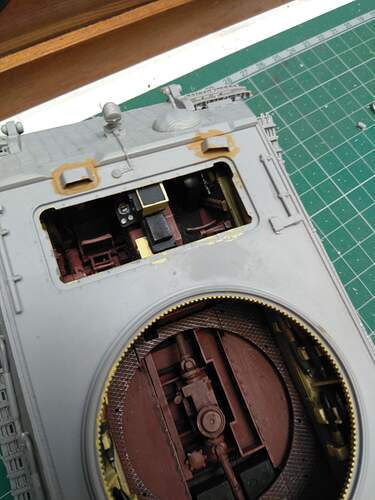 Can’t wait to see the exterior painted too.

Very nice. Will be interested to see what scheme you do. I’m working on the Das Werk non interior version. Not the easiest thing to put together!

Here we are part way through painting. ATM it has four coats on, black primer, base Dunkelgelb, dark brown wash and dry brush highlights. Looks a bit too stark, that’s because it’s awaiting it’s next thin top coat of Dunkelgelb. The lump of stuff on the cupola is Plasticine to stop paint going inside on the painted interior. 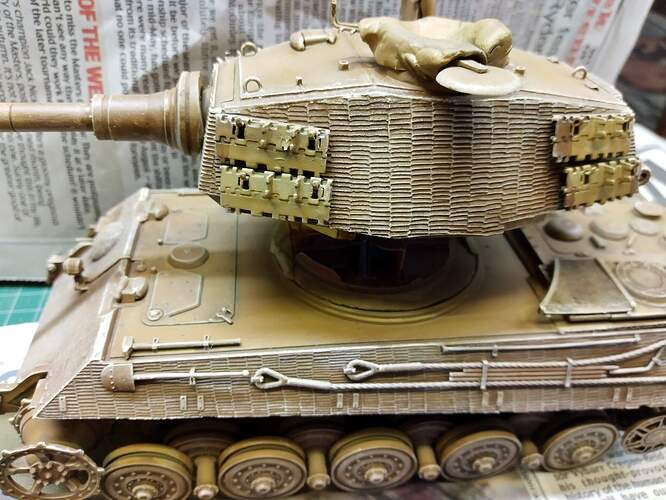 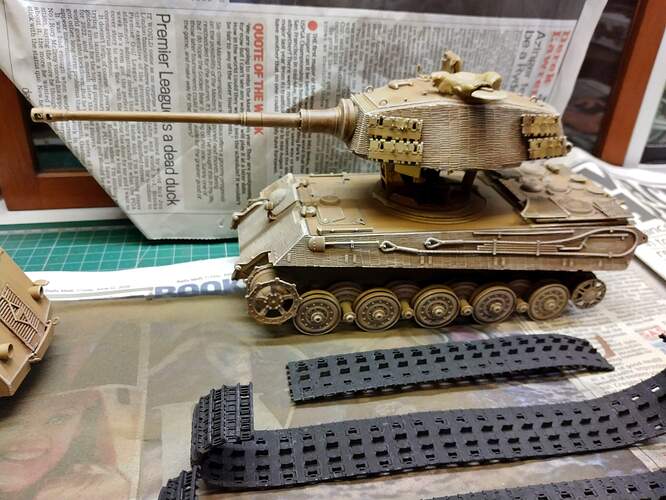 Looking great, a very interesting approach to the painting, I will be watching the progress eagerly, and can’t wait to see what the scheme is going to be.

Thanks for sharing, J.

Next stage, overspray of Dunkelgelb. There is method in the madness, it’s sort of based on the way I paint figures; I tend to highlight very sharply, then use washes to filter the effect down until I’m happy with it. I still use Humbrol BTW, for the figures too. The method uses the characteristics of the paint. The Tiger will be three colour in the end. You can just see bits of the next project in the background. That took two weeks to get to this stage, the Tiger took about two years on and off, with other projects interfering… 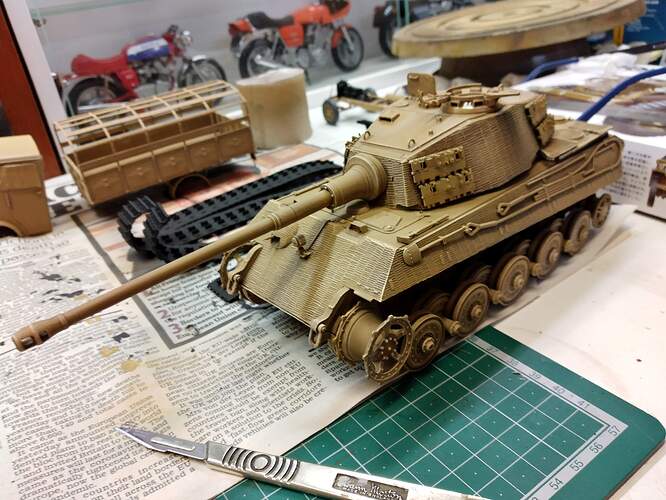 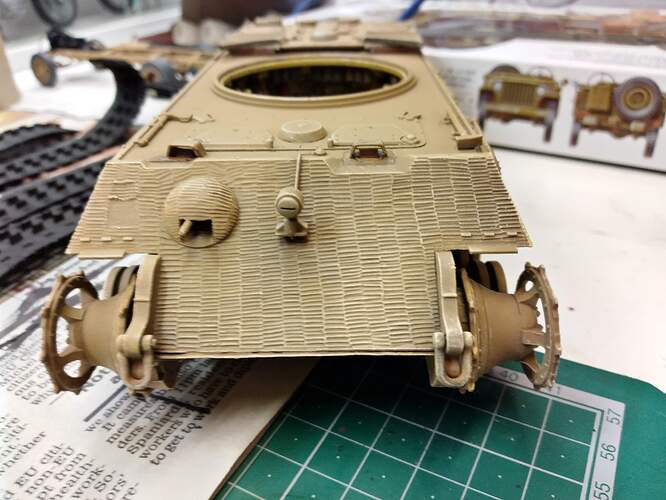 An update. This is what it looks like now with the camo on. I’ve used the photos I took of “104” last time I was at Bovingdon, but I’d managed to leave the end of the gun out! This tank, chassis number 280093, belonged to SS sPz Abt 101, was the mount of SS-Oberscharfuhrer Franzi and was left behind west of Magny-en-Vexin after developing running gear problems. Recovered by the British, it spent a long time at RCMS Shrivenham (interestingly, a girl I worked with at TVP had been in Firearms and had seen it running some years back during a visit arranged by the department), but is now in Bovingdon. I think some of it’s mechanics were plundered to get “131” going (the only running Tiger 1 in the world, Saumur has a running Tiger II). The scheme is sort of based on what it’s painted as ATM, but I don’t know how accurate this is. Wolfgang Schneider in “Tigers in Normandy”, says that the 1st company tanks had the numbers in yellow. The pictures in his book show the trackguards to be complete on the left hand side, but completely missing on the right. This is at variance with how it is presented now. The Bovingdon tank shows the unit symbol on the right of the glacis plate, since this is just about the most popular unit for kit manufacturers it wasn’t too hard to source this from my spares box! 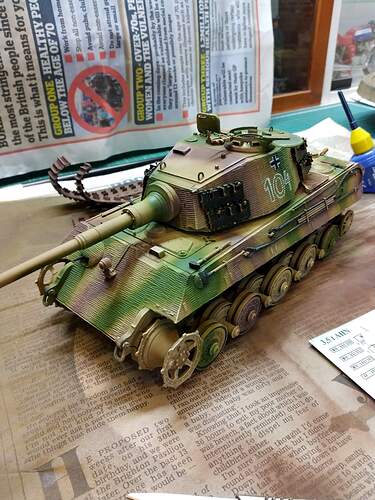 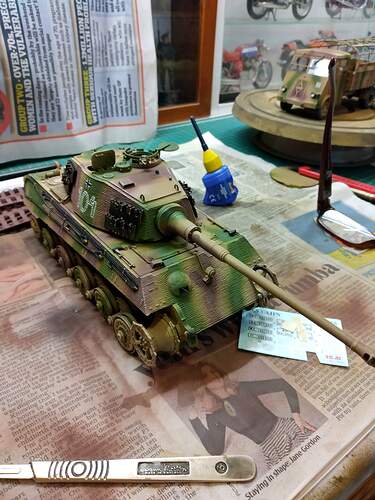 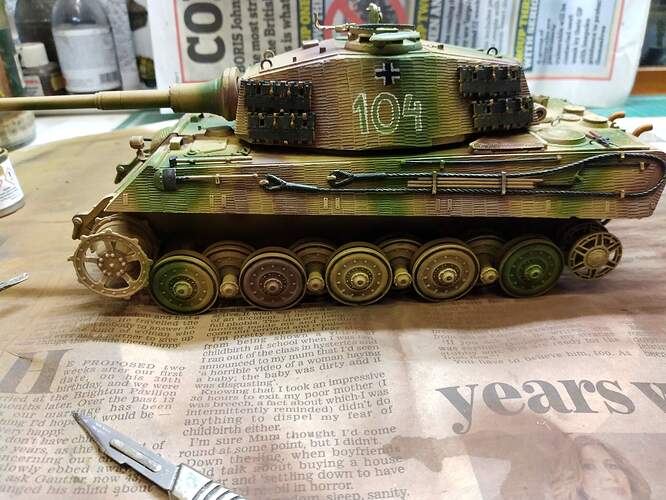 Oh yeah, as you can see in the background, the Renault truck is progressing too…
I wanted to model an SS vehicle, I did consider the Heer unit at Arnhem, but the pictures I can find aren’t really clear about schemes and it’s difficult in some shots to determine whether they have the “Porsche” turret (some were). SS sPz Abt 102/502 (the heavy tank unit of II SS Pz Kps) didn’t get their Tiger IIs until early 1945, so didn’t have Zimmerit, nor did any of the tanks in the Ardennes.

I do love that KT at Bovi, I always linger around it when I’m there… Colours are looking great. Looking forward to seeing more Hohenstaufen …

This is the state of play now. I’m thinking of calling it done. I don’t really like heavy weathering because it masks the fine detail you get in these kits. In any case, this particular vehicle saw almost zero service before being abandoned, so didn’t have time to get battered. I’ve left off the mudguards and part of the side skirts as per the Bovingdon vehicle. For anyone interested, you can see in the background that the Renault got finished too! 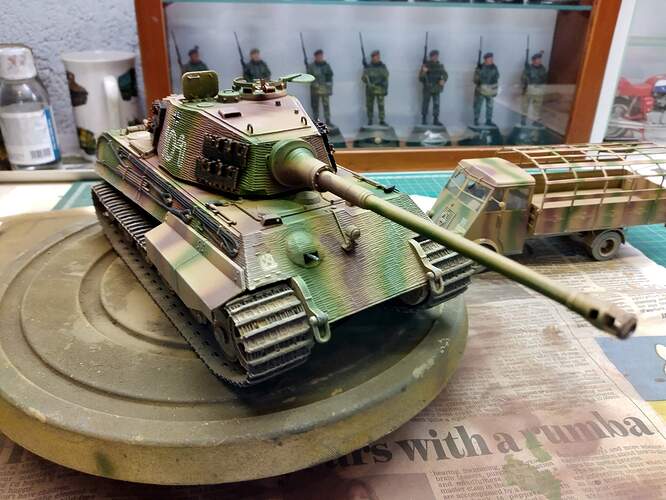 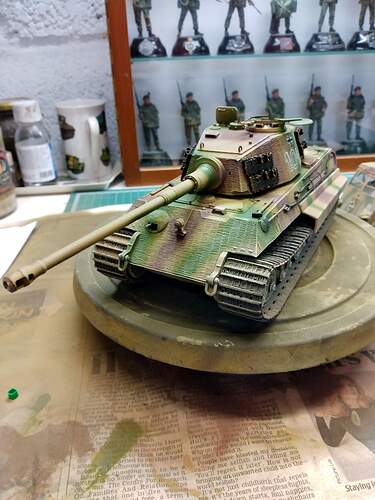 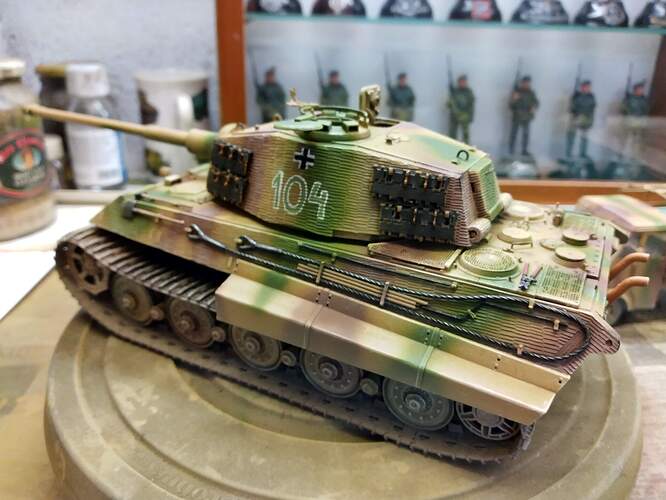 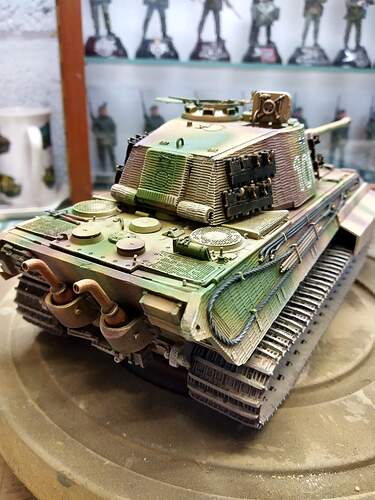 Nicely done Hohenstaufen. I could happily look at King Tigers all day, and that one at Bovi is a beaut. Well done

I think it came excellent. Really neat finish and clean build. Maybe some very light dusting ? But it’s certainly up to you. Looks great as is .

Looks great! I second the request for a light dusting!

The pictures aren’t great, they were taken on my phone. It actually had quite a heavy dusting on the suspension and lower hull, in fact I thought I might have overdone it because you can’t really see the colours on the road wheels any more. It had some MIG powders on the tracks too. It didn’t help painting it in the garage under artificial light; when I brought it indoors it looked a lot lighter than it appeared outside.

I love this tank, and I love the job you are doing on her.

Great job. I do have one question concerning the LAH marking on the glacis plate. Did LAH paint their symbol on tanks this late in the war? I have read conflicting sources.

WilliamHarry, it’s not actually LAH, it’s the I SS Pz Kps sPz Abt 101/501, Michael Wittman’s unit. Many of its personnel came from LAH. The unit marking did appear to be painted on, the confirmation of this being that this unit removed a square of Zimmerit to give a flat surface to make it easier to paint on. The Bovingdon King Tiger displays this feature.