I have a bottle of this stuff. The first words on the back label of instructions are “No thinning necessary”. The last words are “Clean your airbrush by immediately spraying MODELflex airbrush cleaner through it.”

Pointing out that you didn’t follow the product directions and almost certainly brought the problem upon yourself is not “advice on how to make this product work” or “starting a keyboard war”. It’s an attempt to give you some self-awareness. That’s not to say this paint is a perfect product, but whatever problems it may have were completely overshadowed by your deliberate actions.

Next time, perhaps you will look inward before standing on the rooftops to blame someone else.

Like Tim, I have used Tamiya Rattle can primer for years and never, even once had an issue with a grainy finish when sprayed off the model first, then across it, then off again before releasing the nozzle. You start or stop on the model, you get poor results. Light coats and allow it to dry between layers and it is perfect. Yes some areas can get tricky angles, but with appropriate care, the rattle can is still good for those.

Stynylrez needs a big needle - 3 or larger. All the problems the OP has stated are what I experienced when trying to spray with too small a needle.

I have used this stuff a couple of times and I DID NOT thin it. Out of the bottle then when done immediately flush the AB with lots of water and I even snuck in some Windex window cleaner. I have 3 colors white, black and gray and all perform the same. I too mostly now use Tamiya fine surface primer (light gray) 87064 rattlecan. It is a tad on the $$ side depending on where you can find it, but it saves all that time cleaning up the AB.

All things aside I am actually using Mr. Surfacer 1500 through an airbrush currently rather than StynylRez as I am out of 'Rez and have not liked the prices online last I checked, and I found a lot of bottles of the 1500 at a really good price in my LHS. Both products last me a long while or lot of kits (I build a lot of armor so I go through a lot of primer) but I preferred 'Rez for the lesser odor and no harsh chemicals for cleanup. Advantage of the 1500 is it seems to dry faster to a sandable state.

I do like the Tamiya can but it is a bit pricey for me and as mentioned by others I too enjoy the better control afforded by an airbrush.

I had the same problem but got a bigger needle then .30 to get the primer to work for me.

First I am sure some will not like this forum location but figured since it was AFV postman thread that folks asked for a review this seemed to be the best spot for them to see it. I bought model G233 from Amazon as I was looking for a bigger needle for primer painting. It comes with a 0.2, 0.3 and 0.5 needle and tips. It also has a quick release connection parts. [image] The model is very similar to the Iwata HP-CH gun I already have. This Iwata has a top cup but also a MAC system. My Maste…

Another thing to know about Stynylrez in addition to using a larger needle combo is you really need to crank up the air pressure usually in the 25-35 psi range. To clean it first try a blowing a hot water (not boiling but very hot) rinse through your brush and then a final rinse with lacquer thinner (cheap hardware brand). Been using this stuff for several years now and never had what you’ve experienced. That being said, I have a lot of different airbrushes, several which are only for blowing primer coats.
Works for me…might work for you too.
Best regards,
Gary

Hmmm, so I’m not much the wiser – I don’t think anyone’s said the actual finish of AB primers is any better, whatever “better” might mean. I get Tony/mudlark’s point that getting primer into complex/tight areas is better done with an AB, although pre-assembly priming/painting ought to reduce that problem if not eliminate it. And OK cost might be an issue too, although convenience with an ideal result attached usually beats price considerations for me – provided it’s within acceptable budget of course.

Each to their own - personal preferences aren’t a hanging offence…not quite yet anyway.

If it’s any help there may be one alternative worth considering. I try to dodge the issue altogether like Damon, so I only ever use primer if it’s a plane or car that does need a perfect finish. But if it’s any type of military vehicle to receive normal weathering/dings/stains/mud/dust etc, attempting a perfect finish seems pointless to my mind. I just give it two coats of flat steel lacquer, followed by several thin coats of cheap-artists-acrylic paint of slightly differing shades with (purists look away now) a medium-sized soft paintbrush. I can control that better than any kind of spraying, and no brush-marks remain after a couple of coats. (Edit - and by the way saves me a fortune in masking tape) When dry, a gentle fine sanding on edges/wherever takes off the acrylic easy leaving the steel beneath which can be either left or corroded as desired e.g.… 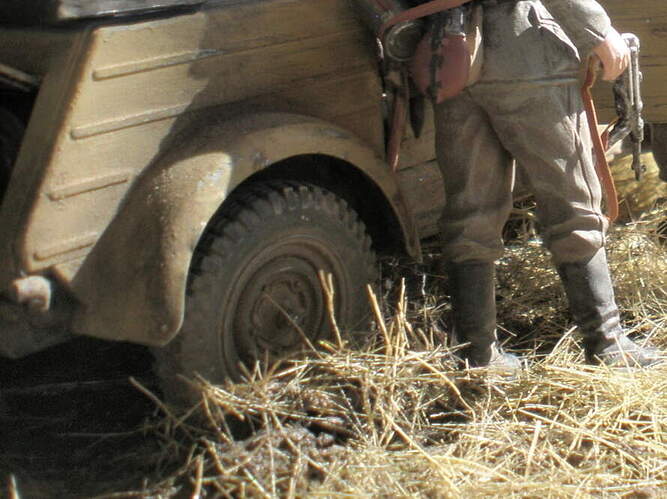 I use them as well. I also use the Mr. Surfacer rattle cans as well. I never had an issue.

Never used it, almost always use Mr Surfacer thinned with Mr Levelling Thinner. The more toxic the chemicals the better the painting experience.

But, a couple of posts above say that water based paints and alcohol don’t mix - I don’t think that’s true, if it was then whiskey and soda would be a problem, and you wouldn’t be able to add both water and alcohol to Tamiya paints.

The gunk the OP glibble ended up with was the result of mixing water based paint with lacquer thinner, something I have experienced myself, after confusing Hataka red (water based) for Hataka orange (lacquer) - not the most contrasty colours to me.

Also, what’s that name about, Stynylwhatever… I still cant remember how to spell it…

Water is always water (depends a bit on what Your nearest water purification facility has dosed it with, chalk is often present)
Thinner can be a LOT of different things. Some “thinners” will turn Tamiya into gunk, some cheap white spirits will turnHumbrol into gunk after a few weeks.
Alcohol loves water BUT paints that like water may not necessarily be “alcoholics”.
Enamels and oils are relatively simple products compared to acrylics and acrylic isn’t one single product either.
Oh, by the way, ethanol is only one of many alcohols. IPA is another and they have different properties.
Methanol is another alcohol, we humans can consume ethanol (causes long term damage but nobody lives forever) while methanol is toxic.

Chemically, as described by alcohol | Definition, Formula, & Facts | Britannica
" alcohol, any of a class of organic compounds characterized by one or more hydroxyl (―OH) groups attached to a carbon atom of an alkyl group (hydrocarbon chain). Alcohols may be considered as organic derivatives of water (H2O) in which one of the hydrogen atoms has been replaced by an alkyl group, typically represented by R in organic structures."

Mr finishing Surfacer 1500 is maybe the best out there, but two negative points-it is lacquer and dries pretty quick in the pot, even tightened.
For acrylic, matte primer, I switched to GSW matte primers-very easy to use and surprisingly durable-need pretty hard scratching to damage it.
Regards!

Ah, the scurge of the junior scale modeller…

Yep!
I turned that Midnight Blue tin to jelly back in 1979 and then resurrected it sometime after 1995.

Well, I’m relieved, at least I now know it’s not just me who has these!

The more toxic the chemicals the better the painting experience.

I also believe that some acrylic paint formulas are pretty temperature sensitive. Some for example if exposed say a

freezing temperature will break down and react poorly later after being returned to room temperature. In other words, storage & transport temperature can have effect under certain conditions. So a model builder could do everything correctly and on occasion have bad experience with quality paints.

Of course the modeler should use compatible thinners etc

As for Badger funny named primer, many have good results, no direct experience because …Floquil Military & Floquil RailRoad Forever…wink

I’ve started using SMS paints from Australia. They have a couple of primers (black, white, grey). These spray superbly without thinning, although they thin well (and clean up) with Tamiya x20 thinner or laquer thinner. Theyre really good for the hot humid climate here in Queensland

They have a couple of primers (black, white, grey).

Yes, but that just makes them a frisky couple…