I’m not sure what I will title this diorama in the end but here is a progress picture of it so far. My inspiration comes from the battle of Brody early on in operation Barbarossa. The scene i hope to depict is a column of infantry marching past soviet tanks awaiting to move out of an assembly area. The kits i am using are HobbyBoss T-28 and eastern express Bt-7. The figures come from various manufactures. The T-28 tank crew is from zvezda with hornet heads. The bt-7 crew will be from alpine miniatures and the soviet infantry will be from Stalingrad and Tahk. So far i have finished building the vehicles for this diorama and have now begun the ground work. For the ground work i have used some model railroad long yellow grass found at hobby lobby, ammo migs meadow grass Matt and some ammo Mig acrylic mud. 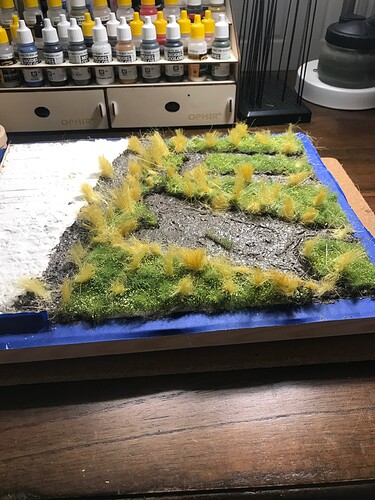 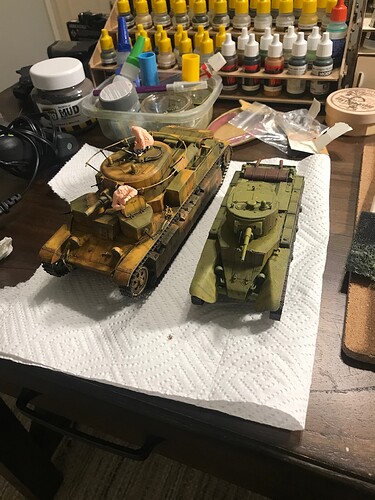 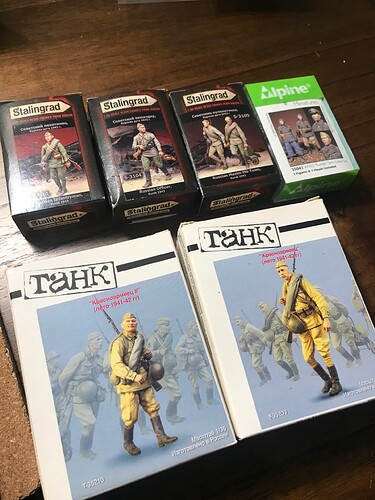 My hope is to have the groundwork finished by the weekend and a few coats of black primer on it. The outcome i want to achieve for the ground work is for it to have a uniform yellow ochre/ green look, With an long uneven tufts of grass and low cut grass popping up from the ground.

Looks like a great diorama in the making Greg. The groundwork already looks great. Those are some great figure selections there. Those are some of the best resin figs out there.

@metalhead85 thank you, i was worried that my grass tufts were going to overwhelm the scene to much but so far i love the look of it. Also I was able to get the Stalingrad and Tahk figures online at the military miniatures warehouse in New York online. The figures came out to about $100 but i think it’ll be worth it. I feel confident in my figure painting skills that i may be able to do them so justice.

Yeah that amount of figures for that price is the going rate. Unless of course you get Chinese knockoffs on eBay for dirt cheap ( I always check where they’re coming from now after a situation I had last year). They’re high quality figs. Can’t wait to see the project come together. The Alpine figs are beauties too.

@metalhead85 ive enjoyed using alpine figures in past builds so i trust they’ll be great. I’ve been curious about Chinese knock off figures. Sometimes the price just seems to good to be true tho

Here’s a quick update, i was able to prime the diorama in all black to ready it for final painting and oil effects. Unfortunately it’s been a slow weekend for building but it’s coming along. My hope is that tonight i will have built up a few of the figures to begin priming sometime this week. 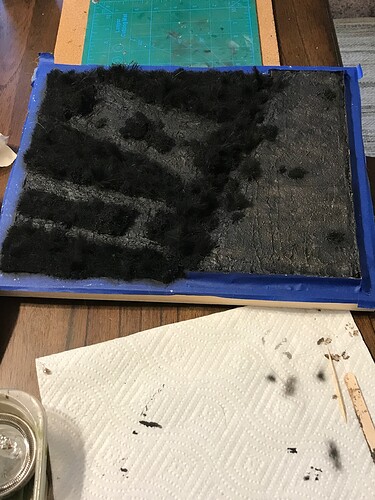 Was able to get a few hours of painting in this morning and now am taking a martini break. Don’t worry I’ll be resuming again in an hour or so… as long as my hands aren’t to shaker

The ground work was completed as follows, for the road and where the tanks will be placed I used ammo migs earth as a base coat, then i proceeded to use ammo migs brown soil as along the edge of the road way and anything near the grass to give it a more darkened look. I finished off with some light and dark buff to give some color variation as well.
For the grass i began with a base coat of AK interactive forest green followed by a layer of ak interactive algae green. This was then followed up by multiple coats of ochre earth and gold yellow to produce the dried up and yellowing grass.

I intend to go back over the underbrush and give it another shot of forest green and i will follow this up with some highlight brushing of gold yellow on the tall grass. I will then finish off the road with a brown oil wash. 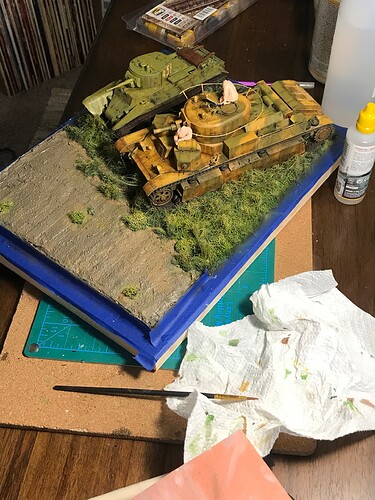 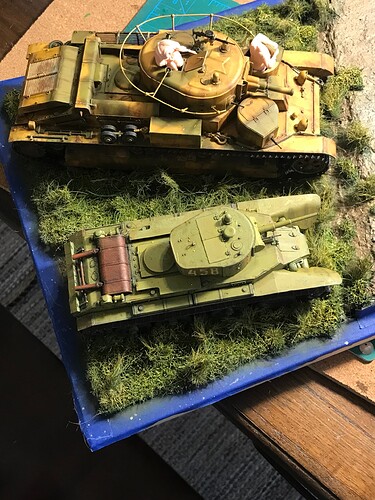 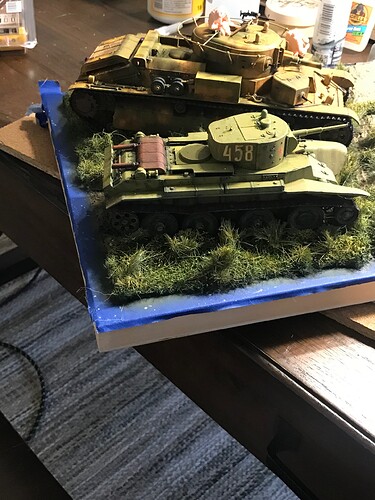 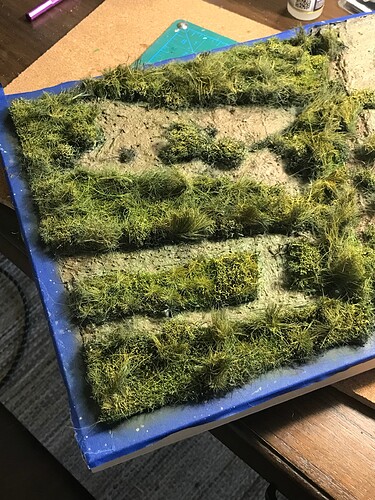 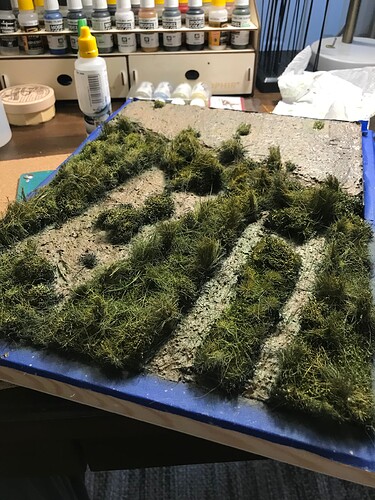 After a hectic week of work i am back at the workbench. I was able to finish my first figure for my T-28. I used a zvezda/italeri figure meant for a BT-7 and replaced the head with a legends head of a soviet officer. Next up will be the machine gun turrets crew member. 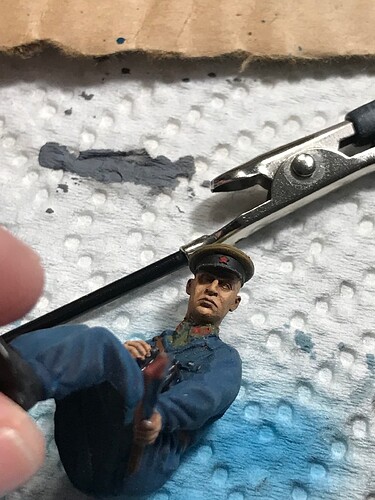 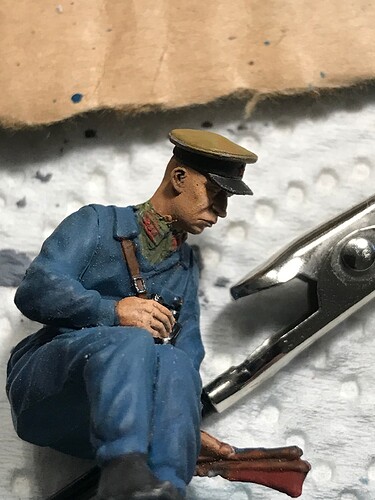 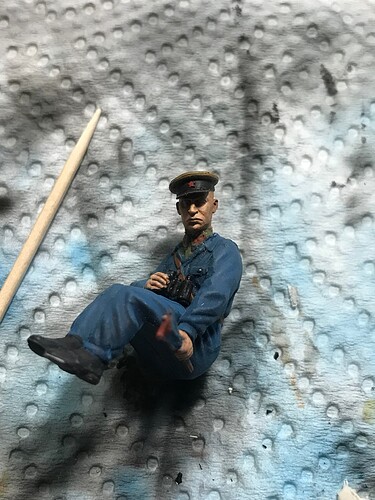 Love the groundwork already, and that figure is really good too!

@bwilt thank you, your dio has given me inspiration in these past weeks! The figure is an old zvezda/italeri one, can’t believe it came out so well.

Here’s another update from this weekend. Just finished my T-28, still working on positioning of the Tank commander but I’m leaning towards the current position. 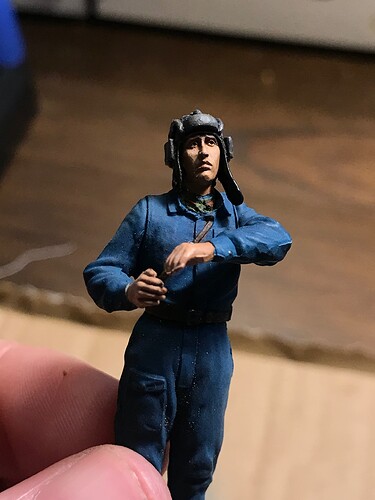 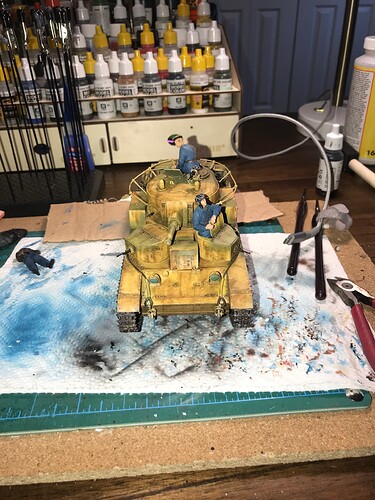 Well, nice to know I inspired someone

I don’t know if you now the trick of cutting arms and legs at the joints (shoulders elbows knees) to adjust the figures to the way you want them to stand or sit? Then just fill up the ut with putty or glue. Beause than you could use his left or right arm to wave at the passing soldiers?

@bwilt that’s a great idea, I’ve heard of the trick but haven’t used it in practice yet. I thought of something like that but i kind of wanted to give an ambiance of everyone’s looking in a direction that their marching in. Like a “God help those poor bastards.”

Was able to get a third figure done during the week. I used ammo migs soviet uniform paint set and airbrushed the cover and used ak interactives red for the star. Uniform jacket is ammo Migs state grey mixed with black and highlighted with a warm skin tone, the belt and holster were painted with ammo Migs burnt sand paint, the gloves were a mix of German camo brown for the base and red leather for the highlights. Pants are ak interactive Russian blue base and Prussian blue for the highlights. 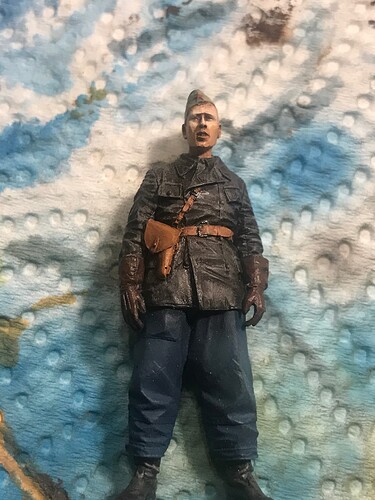 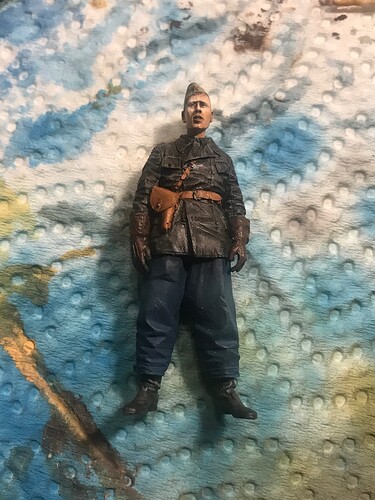 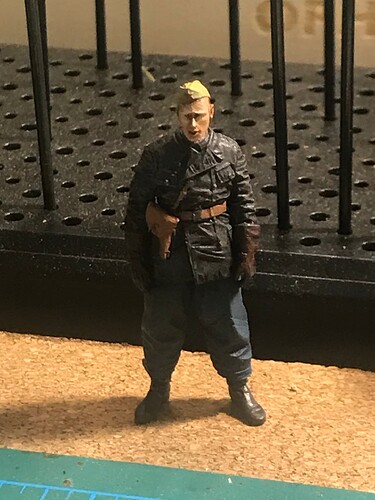 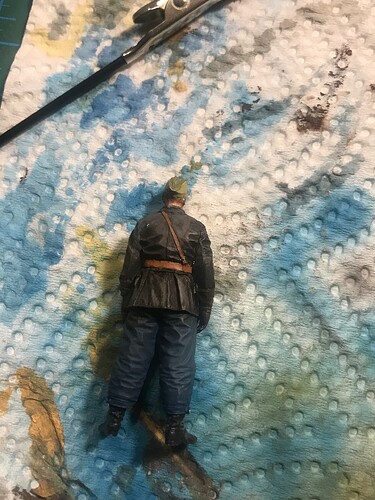 That is very good!! Very well done!! His fae is great, wish I could do that kind of face painting

@bwilt thank you! I thought your face painting was really good. What do you use for paints? I struggled for the longest time painting faces and just watched YouTube videos. A lot of my problem was from not using a wet pallet and making think layers.

I did that with my Bulgarian AHN figure to position his feet on to the petals. Used apoxie sculpt to fill in the voids.

There is figure campaign going on with lots of great tips on painting faces.

@Gregory_J_Copplin, you can enter in with one of those figures already painted (you have the basics before, during and after photos) or any more you might have for this diorama.

I think your whole project is turning out great so far.

@Tank_1812 thank you, i thought about entering it here with a 1/16 verlinden let’s go fallschirmjager but I think I’ll show off these figures once done and just take extra photos.

Btw, does anyone take a picture of there figures with the flash on to see if the paint is too blotchy?

Any figure you want to enter is fine with me, these or Verlinden. I had forgotten if you posted in the campaign, so apologies if you did. I am always looking to include others in the figure campaign as it’s the first in a long time and many people might not know about.

I don’t use flash but any technique is good if it helps.

@Tank_1812 oh trust me if i posted the flash picture it wouldn’t be pretty. No flash is better hahaha. I’m going to join the campaign today! I’ll post all my figures so far and keep adding to it! Thank you for including me.