As an armor guy I have little experience with ship kits. but want an interesting summer project.
I want to build the Tsesarevich.in 1/350th scale or larger. It is sort of a steampunkish kinda boat.
Do you have recommendations as to which kit to get and which to stay away from?
Which aftermarket products would be worthwhile seeking?
I prefer accuracy and fit/finish given the choice.

Greg for the main kit there is no choice other than the 1:350 scale Trumpeter offerings for a 1904 or 1917 time period. But according to a german build article in Modellmarine page the kit is quite well detailed and good to build. The builder said just the rigging is a demanding task.

Aside from the main kit there are, of course, wooden decks from different countries as well as turned barrels from RB available. I believe I have seen an announcement from Northstarmodels that they are planning to release an etched upgrade set for this class as well but you might check this again at their homepage.

Thanks. That is what I am gleaning from the reviews.I think there are 4 frets of PE that come with the kit. I see some finished kits online and was wondering about the lower hull color. Some photos were red and some green. I was thinking green must be way off, but the best built kit was green hulled so maybe there is something to it. 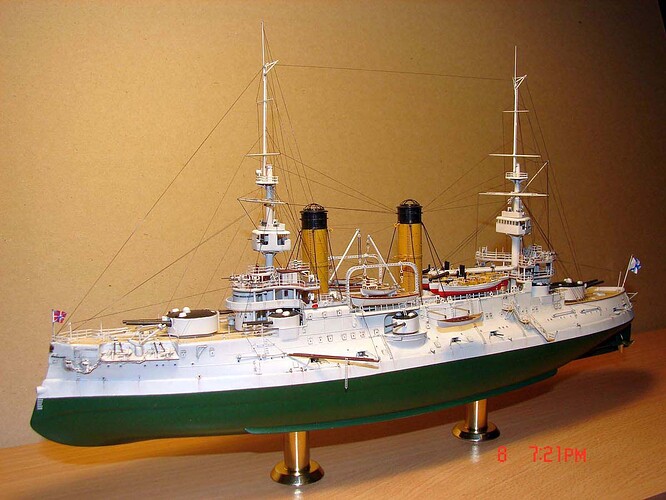 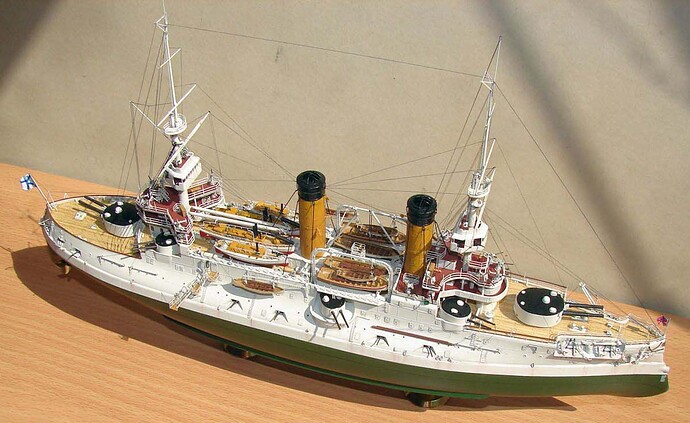 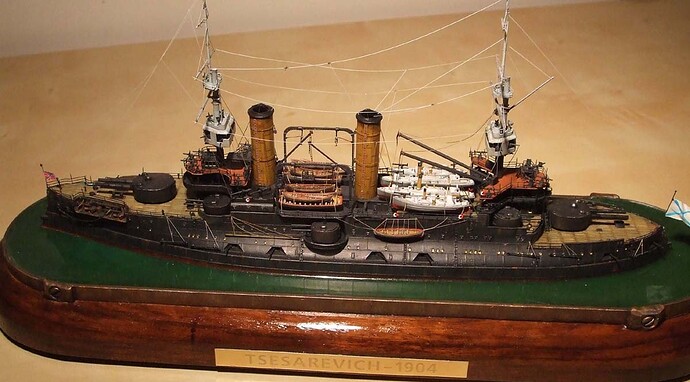 I think green is the right color for the lower hull. I´ve seen pictures of the cruiser aurora from the same area restored in St. Petersburg. There I was able to clearly identify it as a green. Also the Kagero 3D book about the Battleship Sevastopol is showing a green. Lifecolor is selling an Italian antifouling green which should match perfectly.

Onto the next item. The picture below shows the sides of the hull rising above the fantail deck for about half way back toward the stern. Is this a feature that needs to be added? I do not see this on the kit photos. 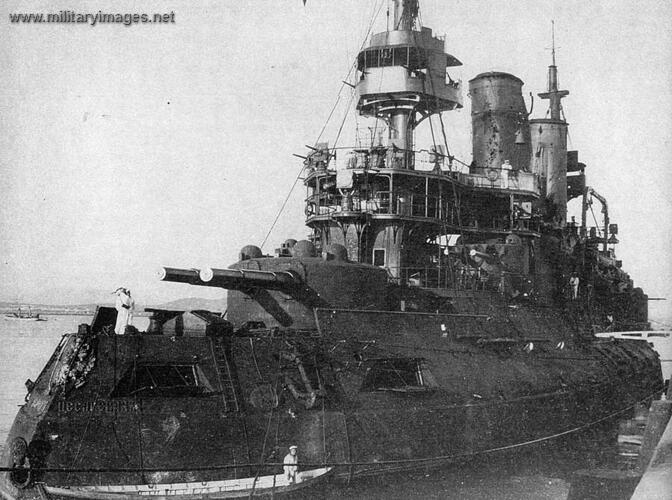 Given that it is labeled battle damage I suspect the hull isn’t raised, the fantail is lowered: blasted or burned away. Note how little space there is between the tops of the rear gun ports and what looks like the hull line compared to the models which have twice as much. Also, if the raised section is the original hull line that puts the turret just above the deck without a significant barbette under it, which matches the models. Chalk one up to Japanese gunnery?

A book on Tsushima I read had an eyewitness account of the sinking of Borodino (I think) that mentions the green hull showing as the ship capsized. My own model of the ship followed that description, so I’m glad I have been vindicated!

Its just the aft part of the bulwark cut away. If you google “tsesarevich battleship” you will find pictures of the same area from a bit higher and undamaged. There is even a railing in this area.
Green antifouling was used by many navies, eg italian and austro-hungarian. Varyag was green underwater and Aurora still is. The black and white photos of the time are not easy to interpret.
Btw. recently it came out that HMS Hood was most of her life dark grey underwater…

I stand corrected: here is a photo labeled as 1915 giving a better view: 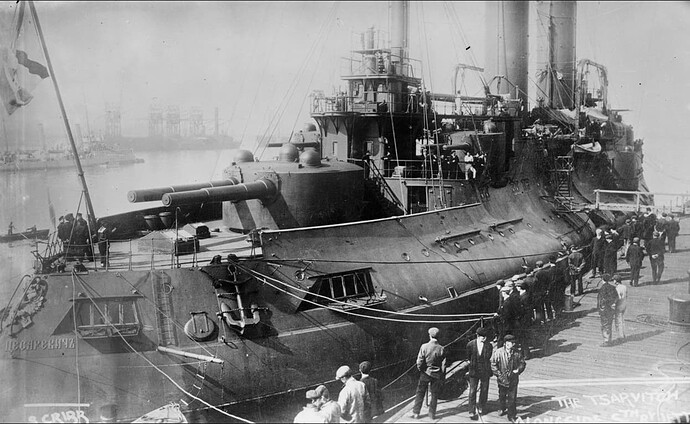 To add confusion here is a history showing it before the war without the raised bulwarks and later with them. There has to be a story there; perhaps modifications at Port Arthur or else bad dating of photographs.

Naval History from ancient times to this day, medieval, enlightment and industrial era, WW1 and WW2 and the cold war. Ships typologies and fleets studies

Here is a somewhat amazing source that seems hampered by being written in russian then imperfectly translated to english. From the discussion it almost appears that the rear part of the raised bulwark on the quarterdeck was made to be easily removed and replaced.

Don´t get too crazy about this detail. I am shure there were more conversions which are not so easily detected.
After she was interned in Qingdao (Tsingtau) there were many photos shot showing her damage. If you compare carefully the background and the arrangement of masts, cranes and the damage you should be able to find a clear defined status of her at a certain point of history.

Here is the translated Russian Wikipedia page which has far more detail than the English language one:
https://bnm.wiki/wiki/Цесаревич_(броненосец)

Here is a detailed damage report after the Battle of the Yellow Sea:
https://vipusk-party.ru/en/a--pushkin/bronenosec-cesarevich-luchshii-linkor-russko-yaponskoi-voiny.html

Hello.
Only trumpeter.
Don’t believe the coloring instructions. She’s wrong. The waterline level is shown incorrectly. For military coloring, the color of the hull and superstructures is incorrectly specified. The Tsarevich never painted himself black. The color of the underwater part is most likely green before returning from the war. The bulwark on the poop is removable, it began to be removed after damage during the war

I would like to say we are glad you joined the conversation and welcome aboard!

The first photo has no railing where the missing section is and the second photo does show railing.

To make the kit what I see available is the Trumpeter 1/350 kit of the 1904 model.
Master model barrel set.
And for a wooden deck, are there any brands that are better in fit and engraving?

I’m talking about this message 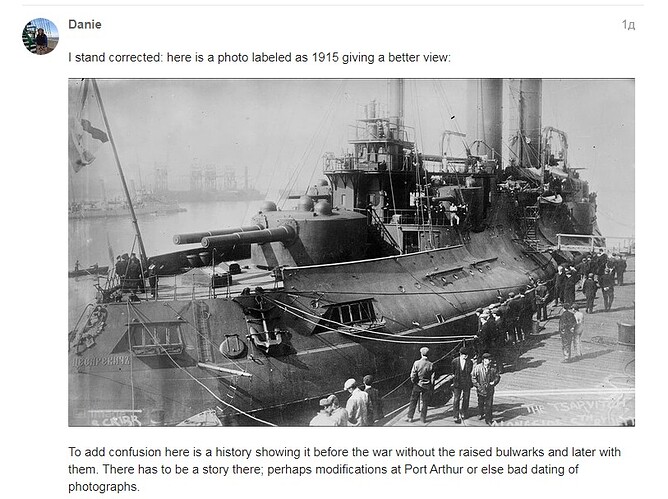 You need to be very careful with this site

Naval History from ancient times to this day, medieval, enlightment and industrial era, WW1 and WW2 and the cold war. Ships typologies and fleets studies

The photo is not of the Tsarevich. In the photo, a ship of the Borodino type 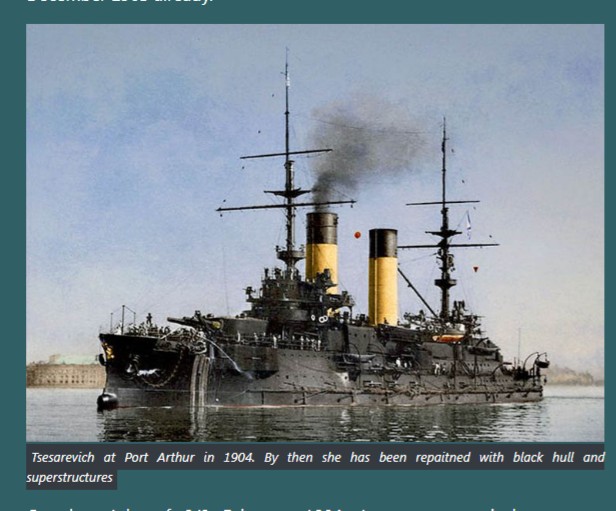 I will look at the materials on this topic at home. There is a great Russian forum on this ship

P.s. I’m sorry, as a new user, I can only leave 3 messages in the subject