So, I was planning to buy the next model while I finish the Sherman and I was thinking about another classic, the T-34, (no specific variant in particular).

So far, on Amazon I have these options readily available at comparably low prices:

Do you own any of those or know anything about them? Which one should I take?

I’ve built quite a few of the old Tamiya kits. They are great entry level kits, but typical of their mid 70’s vintage. Zvezda makes some (now) older and newer tool kits. Check the kit number on Scalemates to see if you’re getting one of the older or newer kits. I’ve built a couple of their older kits, and they aren’t too bad, aside from the overly stiff vinyl tracks. The old Zvezda T-34 kits are also good entry level kits, just a bit more rough than Tamiya. I believe that the new tool Zvezda T-34s have link & length tracks. I haven’t built or purchased one of those yet.

Checked on Scalemates, apparently the kits are made between 2018 and 2020.
I suppose this makes them good enough, with the clear plastic parts included.

The newest one is the Uralmash, I am leaning towards it.
There’s just 2 reviews on Amazon, a 10 star review which says just “Good as child gift” and a 1 star review in German which I cannot understand but shows a picture of the plastic tracks not “closing” properly. 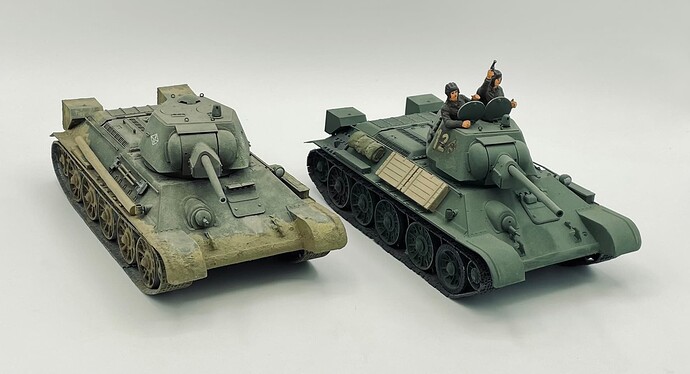 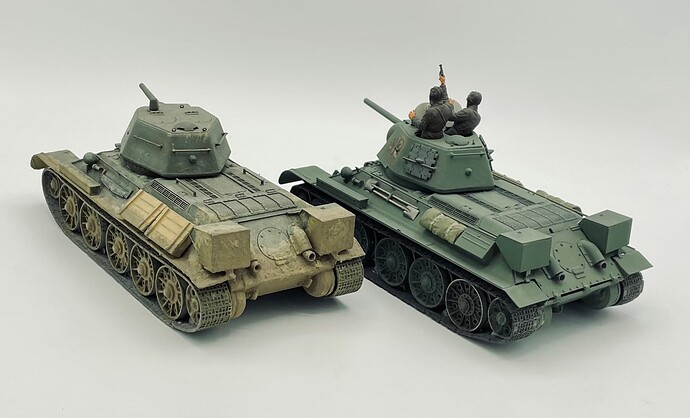 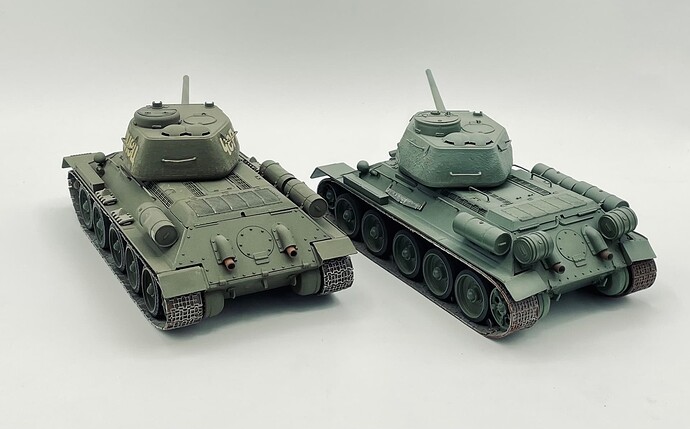 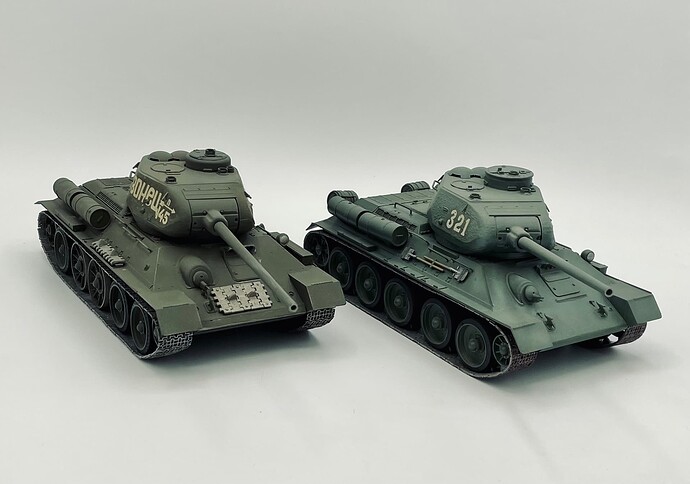 Tamiya kits built in the 80’s, Zvezda kits when they came out later on.

Both look good enough for government work, and the differences could be put down to the factory that produced it maybe. I’m no expert on Russian armor but from the kits I’ve seen that seems to be a thing as it was for some German vehicles.

They look like a matter of price/ease-of-build being the main factors.

Just one warning about buying Zvezda kits on Amazon. Make sure that you are purchasing the new molding kit. I bought one just looking at the box art, and, at the time, the old molding and the new molding had the same box art but with a different kit number, and I accidentally got the old molding, which I would not recommend…

Always check Scalemates first just to make sure. So many reboxings or minor changes out there.

Scalemates informed me a kit I was looking at had metal tracks although the box did not.

Between the Tamiya model (excellent for beginners) and the Zvezda T-34/76 Uralmash I would go for the Zvezda one.
It’s good, it’s cheap, and it doesn’t have an excessive number of parts.

I made up my mind, I’ll take the Uralmash, thanks everybody.

just make sure its the later one with the link and length tracks.

To keep the price down, Zvezda includes some rather unconvincing plastic screen instead of photoetch for the rear engine deck screening. A basic photoetch set will put it right. The top grills over the engine are molded solid, though, and the recesses are very shallow, which is disappointing.
Actually, RFM’s T-34 kits are well detailed, have PE and link and length tracks, and the grills are molded hollow And they’re reasonably priced.

Actually, RFM’s T-34 kits are well detailed, have PE and link and length tracks, and the grills are molded hollow And they’re reasonably priced.

But are the RFM T-34 kits entry level models? Kits for the less experienced modeler that the OP was asking about. Dragon and AFV Club both make great T-34 kits, but I wouldn’t recommend them for the entry level kit modeler. Maquette T-34s can be made to look nice, but they will fight you every step of the way, and I sure would not recommend them to those who want a simple kit.

I think anything more than those kits I posted would be wasted in my hands.

Anyway, I ordered the Zvezda Uralmash, hopefully it will be the 2020 version as advertised on the Amazon page.

Don’t sell yourself short! Your work so far has been great for a beginner! You could handle the border kit, I have no doubt. Only challenge is the PE screen.

Good luck with the Zvezda kit. I don’t have any of their kits but i hear the new one are excellent

Yes, that’s the number on the box picture, hopefully Amazon will deliver just that and not some older variant.

Zvezda did not make a T-34/76 Uralmash in their original tooling kits. That variant is one of their new tool releases.

and a 1 star review in German which I cannot understand but shows a picture of the plastic tracks not “closing” properly.

Have you got a link for that German review?
I could translate it to check what the issue was

I didn’t even bother going through Google translate, as it was evident from the picture that he was complaining about the track length not being perfect (they didn’t close properly).
Anyway, here it is, it’s actually 3/5 stars, I was mistaken. 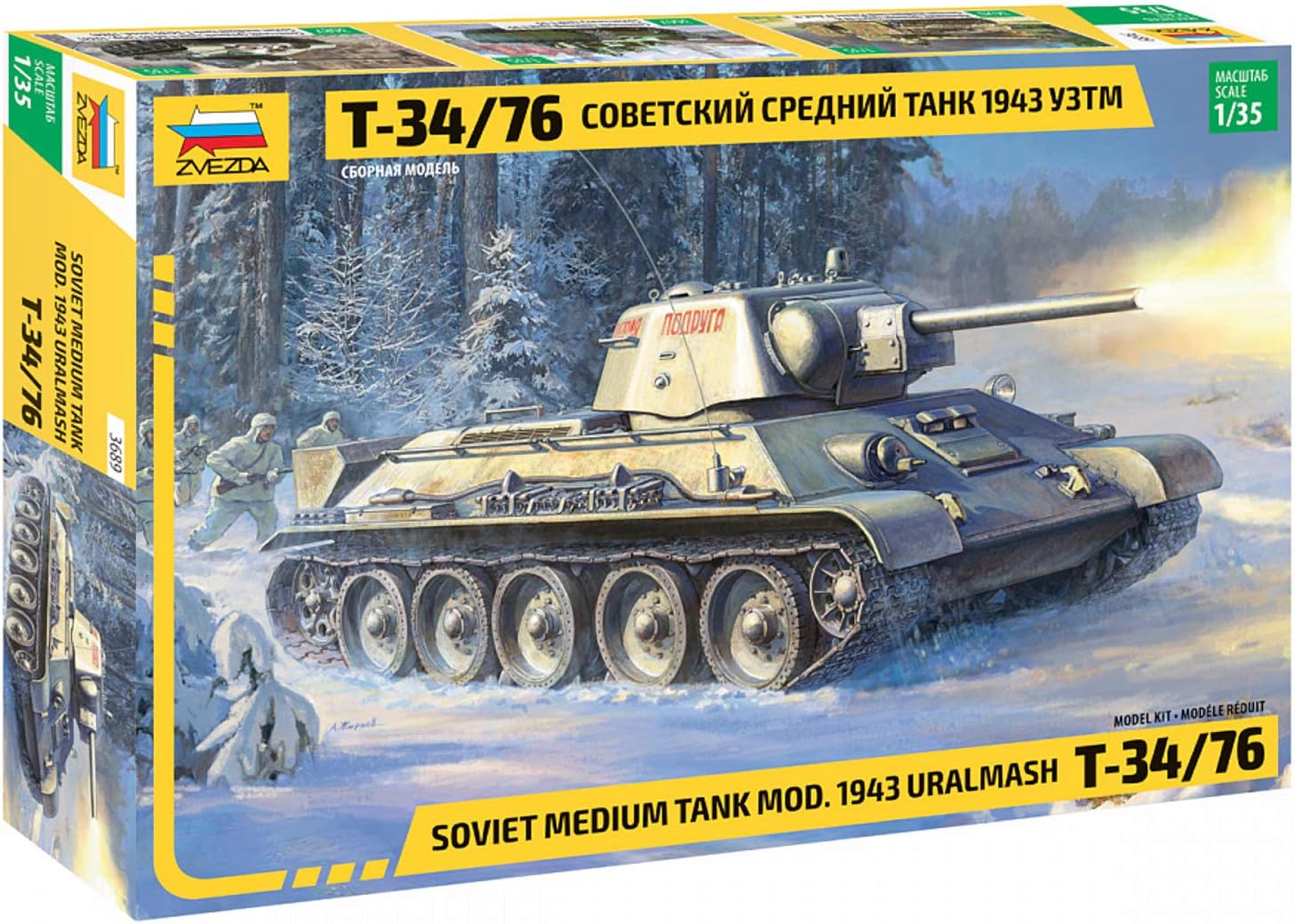