Blast from the past, Revell 1/40th scale M56 SPAG Restoration

If you want to make the U.S. Army M56 Self Propelled anti tank gun, as far as I can tell, forgive me if one comes out in the meantime, The old Revell 1/40th is the only game in town, It would be quite something for this to come out in 1/35th by one of the modern kit makers, till then…

of course, they are becoming rare and harder to find, and due to the law of supply and demand, they are going for silly money for such an old and, by todays standards, basic kit. if you can find one unstarted mint and boxed, you would be rather rash to make it. But there is an alternative, yes the made up one’s from the 1960’s. as I have done. This is what I’m working with. 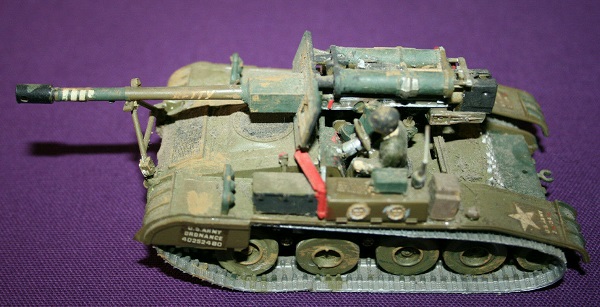 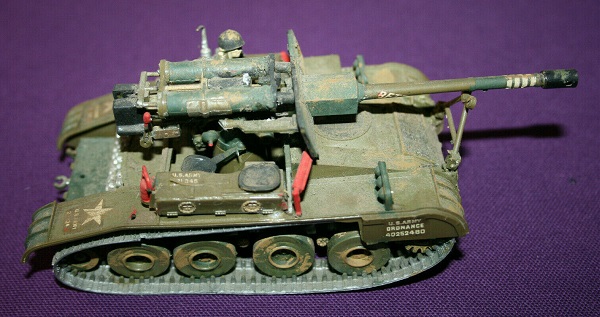 I’m quite sure some watching are thinking “what the…”! bear with
me, anyone who’s watched the barn find to show stopper classic car rebuilds on Telly will know, well sort of, turning a silk purse out of a sows ear takes time, and understanding.

We all made them like that once, over squeezing the Britfix glue and over welding the parts together, but this lad, who-ever they were, didn’t foul it up that bad. I’m breaking it all down and submerging the whole model in DOT 4 Brake fluid to soften the paint. 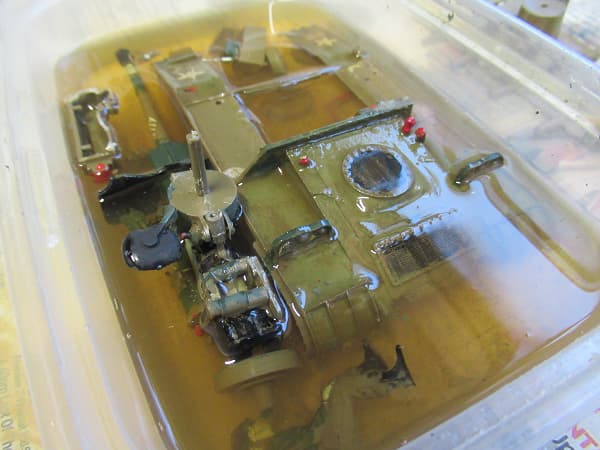 after a good soak, the paint mostly swept off with an old toothbrush to reveal bare plastic, laid out after the gloop was drained off and the items scrubbed in soapy water. 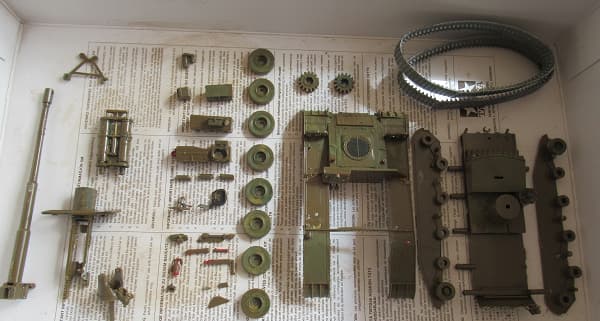 a good inspection of all the pieces to see what I’m going to use, repair, replace. Starting with the upper hull that includes the whole length of the track guards, bonnet, front and rear mudguards. 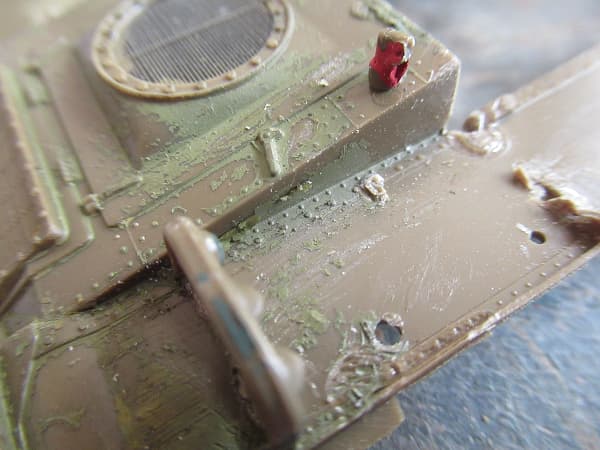 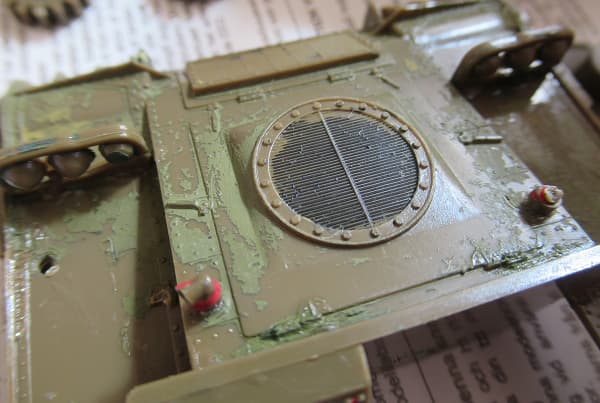 the trackguard behind the front light cluster on the left side is a mess, repair, replace, restore… replace. 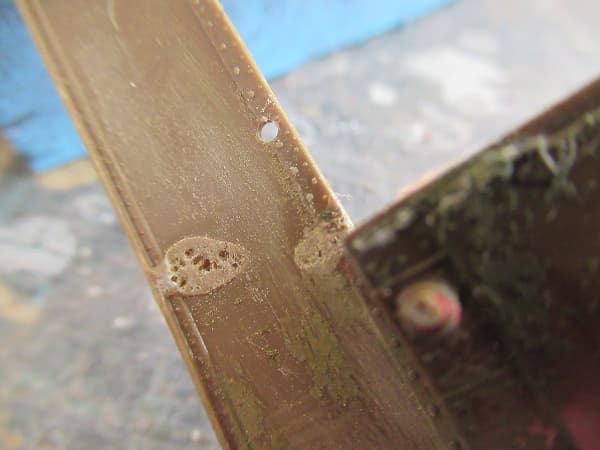 lucky for me the pitted areas are straight and reasonably easy to refabricate in styrene sheet and PE from the spares box. 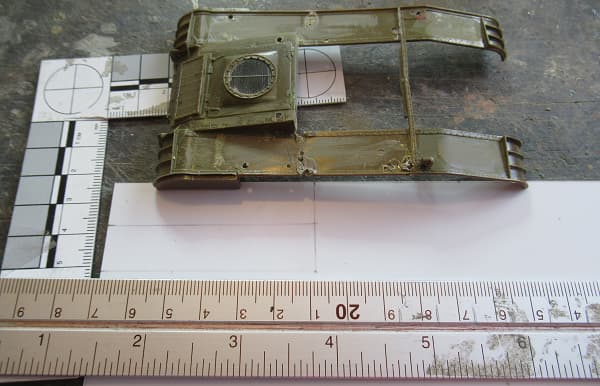 The guards cut out using sprue cutters, very handy for those tight corners. 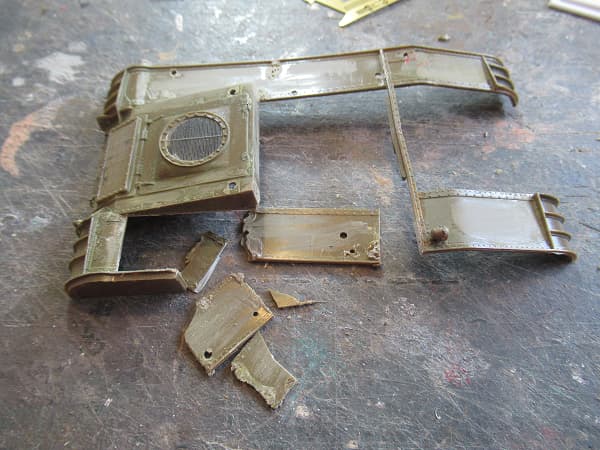 trial fit of the replacement lengths, held in place by fit alone, so far so good. 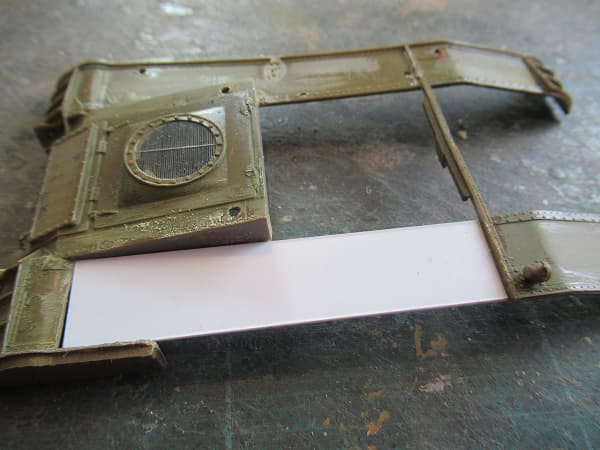 clamp this gently in place and weld in place with liquid cement. 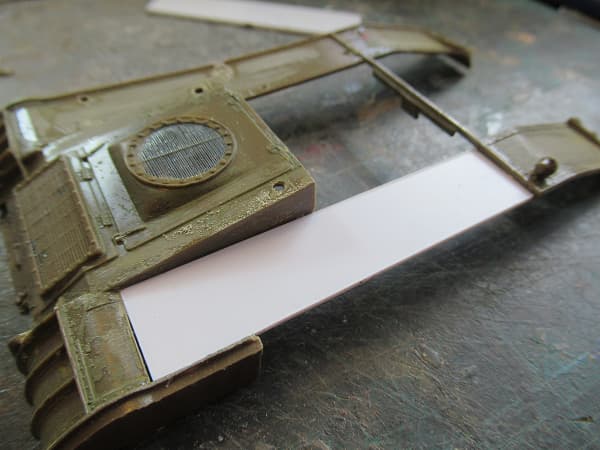 This actually isn’t too bad a little model; I made one some years ago and found it surprisingly good.

I believe that Hobby Fan do one in resin in 1:35 - which I’d dearly love to be able to afford - although, for me, as ever, resin tracks are a bit forbidding. I just wonder if say, a firm like Takom will get around to it?

Anyway, not meant to be a 1:35 distraction, I’m sure you’ll do this little kit justice

nice start! please show when finished. By the way what part of England you from?

I wonder if Atlantis has these molds, they seem to be bringing out all the old Revell kits from back in the day, and due to the limited use that this vehicle had it’s highly doubtful someone will bring it out in 1/35 scale.

the PE strip from the spares box bent to shape to make the strengthening pieces, checking for square. 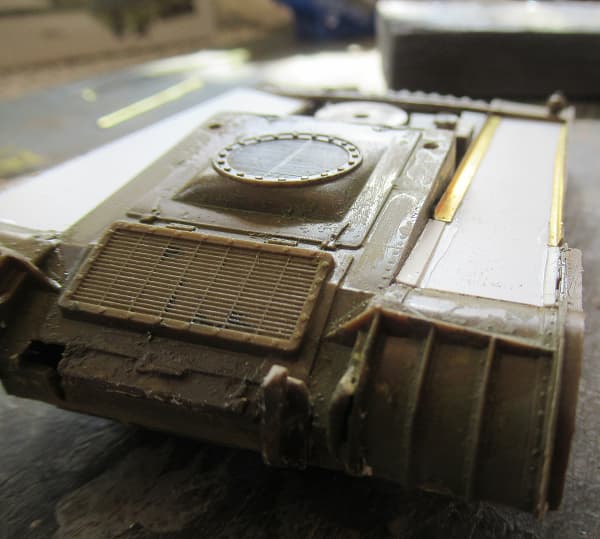 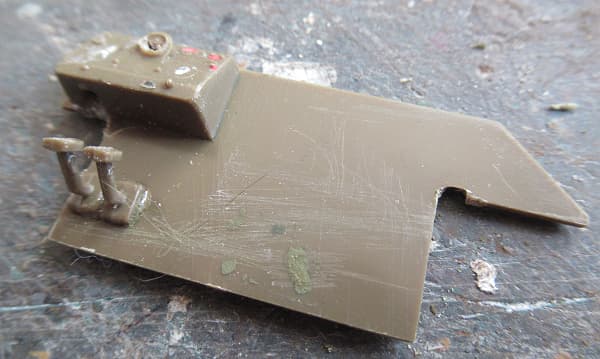 the foot peddles were re mounted from the other side of the bulkhead through the access slots, accelerator and brake, the peddle to the right is the forward hull drain. 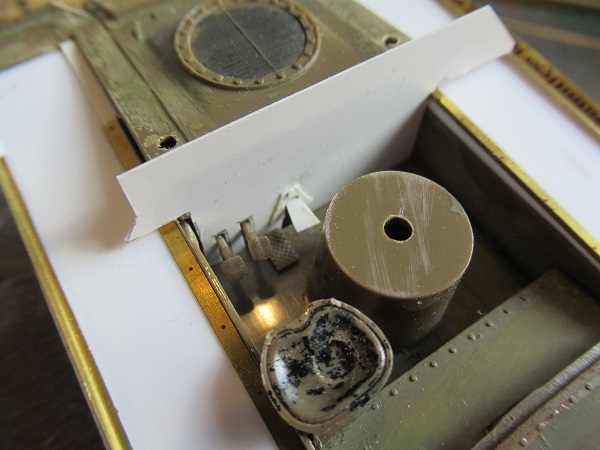 the instrument junction box in front of the driver is rough and the surface detail is distorted, so I flatted that back for re profiling, it holds the steering and dash instruments. 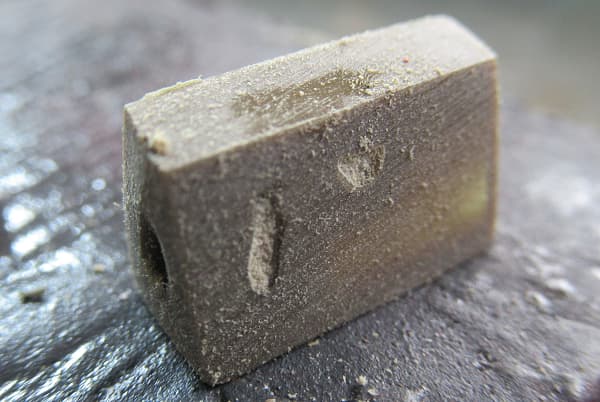 the lower hull side frames were built up adding the broken off axles, using the break physical fit to create strong attachment points.

checking that the upper lower hull fit has strength and are lined up as perfectly as possible. 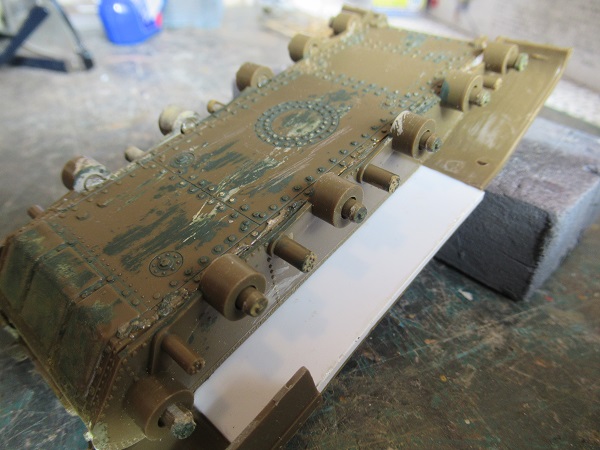 Using scrap pe frame I remade the brush guards, but thenmoved the lights back further. The hull in grey primer 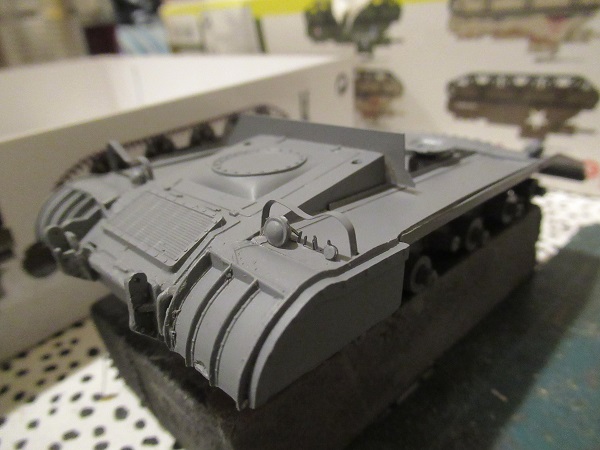 there are certain superficial similarities with the Snow trac, perhapse one influenced the design of the other, whichever came first? 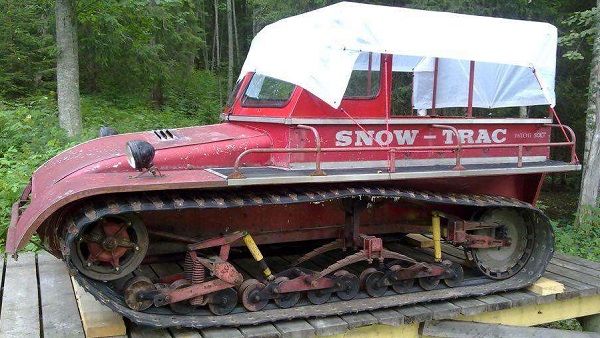 I say superficial, the snow trac had a VW Beetle motor. 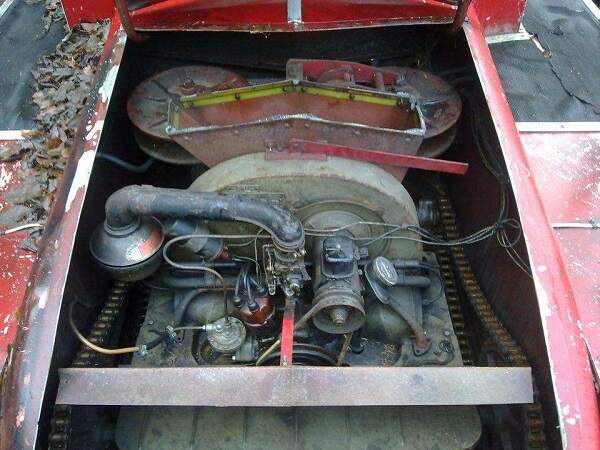 here’s what Nick Moran said about the M56 Scorpion… 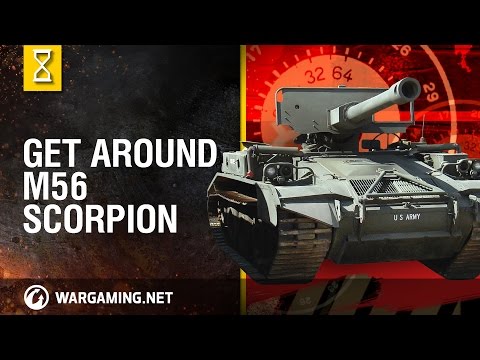 I should think the M56 came first; incidentally, the British Royal Marines used these - Sno-Trac that is - not the M56 - for use in the Artic. Scorpion (!) Miniature Models do a couple of resin versions in 1:35, one with the Wombat Anti Tank weapon.

Didn’t the M76 Otter utilise the same or similar suspension - as the M56?

Anyway, I was always impressed by the M56 firing, and tired to replicate this when I built my Revell one: 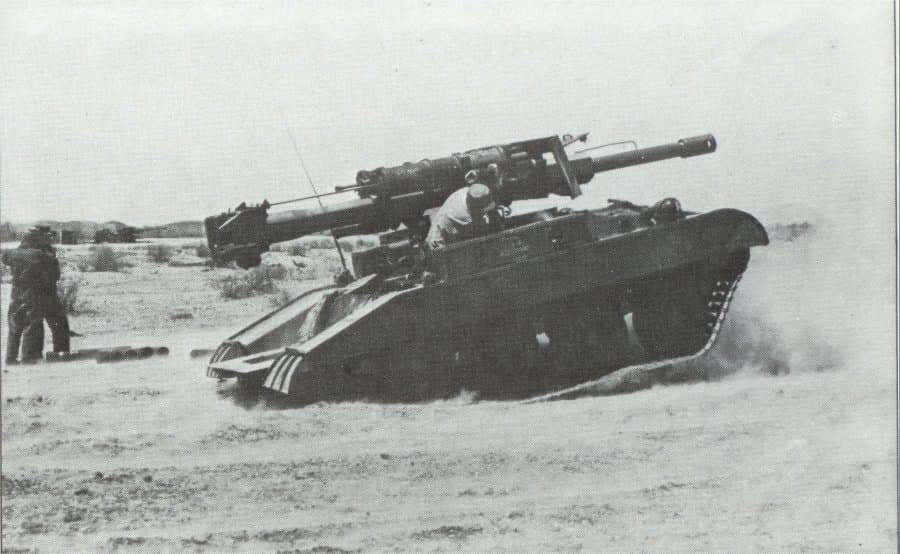 I’ll try and find my model and see if it withstands judgement after the years.

oh my. This is one I so want to see in 1/35 styrene. I never knew it had been done in any scale in plastic.

I have a couple of the Revell “repops” of this in my stash that I planned for a sci-fi build (would look cool painted in yellow and black camouflage on an alien planet) but after watching Parts one and two of the video I may build this as an “Out-of-the-Box” project just for sh_ts and giggles! You have to ask yourself WTF were these people smoking when they designed it! LOL

I built that kit when I was a kid! Gotta be pushing sixty years young right now and maybe even close to sixty five years. Somebody needs to do an injection molded on in 1/35th scale, and then be thinking about a 1/16th scale version (they’re pretty dinky). Seen lots of them placed as monuments on various forts I’ve been to.
gary

great picture, you can see the gunner has his head well away from the gun sight as it kicks like a mule. that’s some gun to fit on a light platform, it would have to have it’s escape route well thought out after the first round, the crew are so exposed.

the gun parts getting torn down and rebuilt, but better. 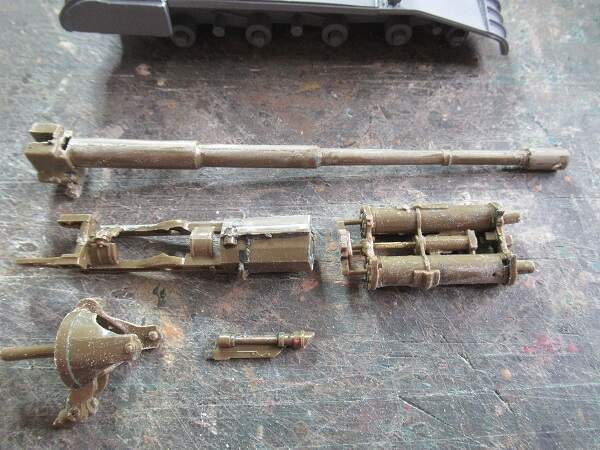 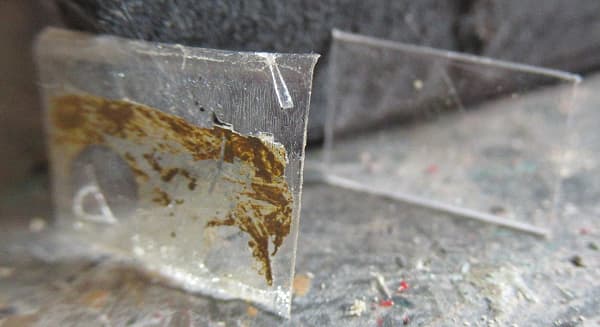 the gun shield windscreen original kit part is way too big, I’m cutting out a piece that will fit snug in the frame.
looks a lot better flush fitted. 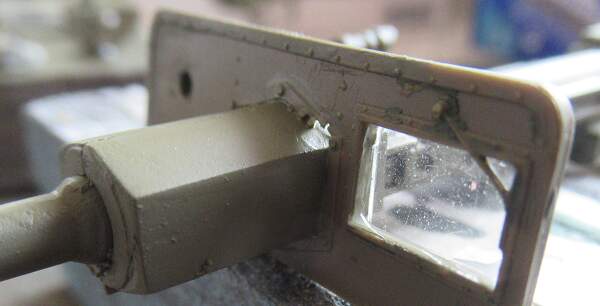 gun travel lock, the kit part needs thinning down as the hinge blocks are way over thickness. 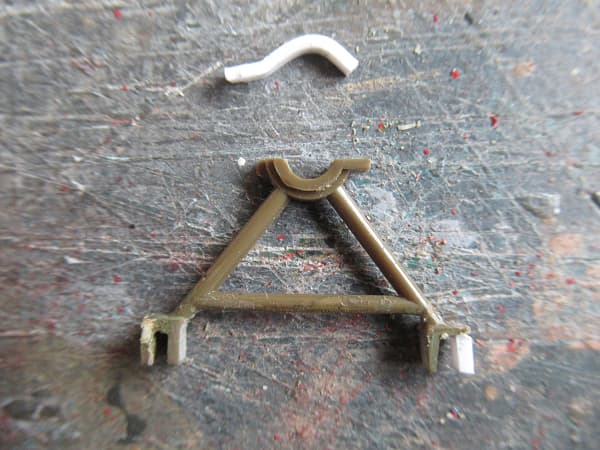 the hull in U’S’ Olive Drab. wheels and track fitted after the track was dry brushed in several tones of matt black. 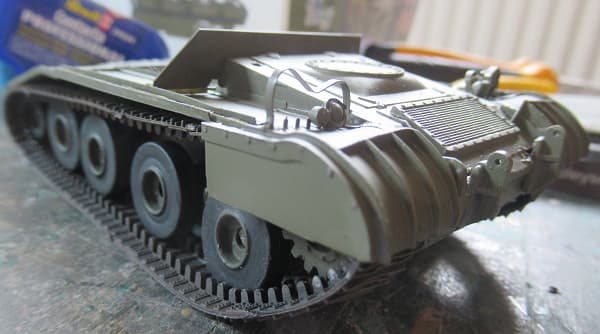 the tracks are made up from two rubber bands on the real M56, joined by steel Grousers bolted through the rubber, a bit like M3 Halftracks. 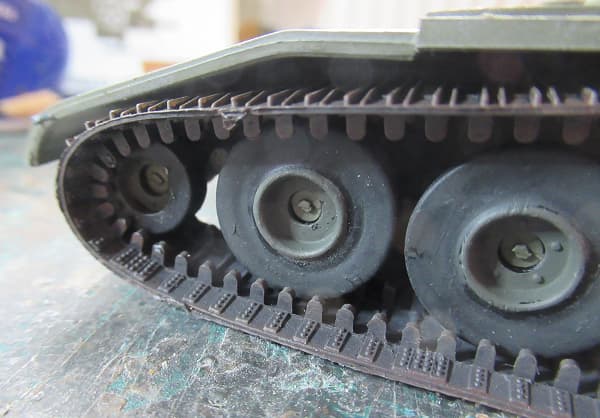