Don’t worry, we will

Looking really good with those beams… found the broken ones…

Thanks Bert, its all coming together … I will probably rearrange the beams and planks a little to make the broken ones more obvious when I get around to setting them in their final positions.

Interesting images @petbat , I wonder if the parts on the loaders/gunner hatches are possibly locating guides and or locking clasps parts ?

Fyi to everyone, I will be withdrawing from the campaign as my Pzh. 2000 is getting a different camo scheme as in the original pic. So I no longer meet the criteria.
I will be making a thread for it tho.

another one for the ‘this would make a great dio’ book: 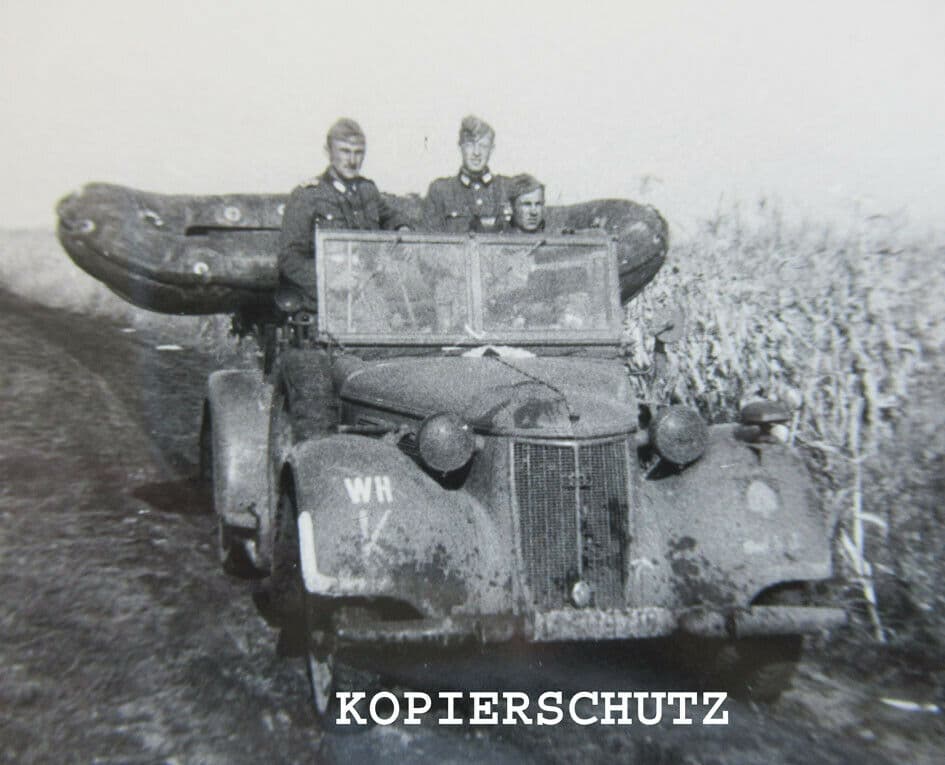 Lifestyles of the rich an famous - dining car 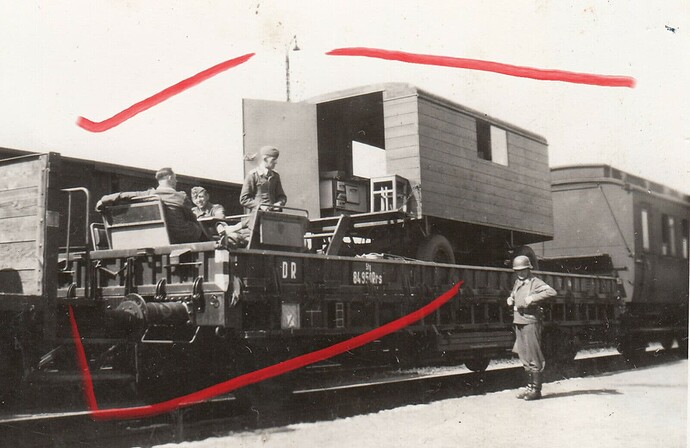 No probs Ezra, look forward to seeing the new thread

Yes, they are parts of the hatch locking system. The interesting part is they are located differently to the kit but overall this pic has a lot of differences to the kit, but also many differences to actual period vehicle pics.

Compare the aspects of the cut out/raised area on the side of the bolted plate and the notch at the rear of the plate in the video capture to this pic. 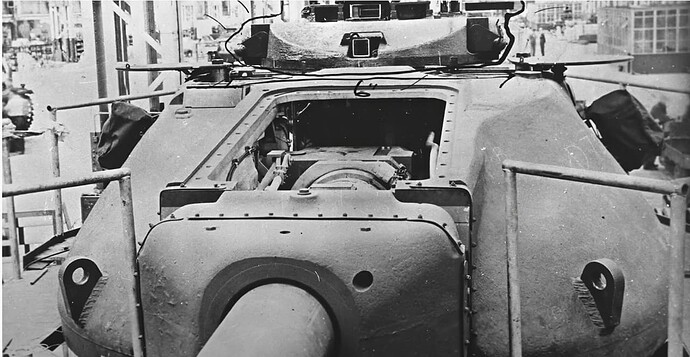 image1281×663 99.1 KB
Note also a prominent bolt on the gun mantlet not visible as a bump under the canvas cover in the video still. Then compare that pic to the kit: 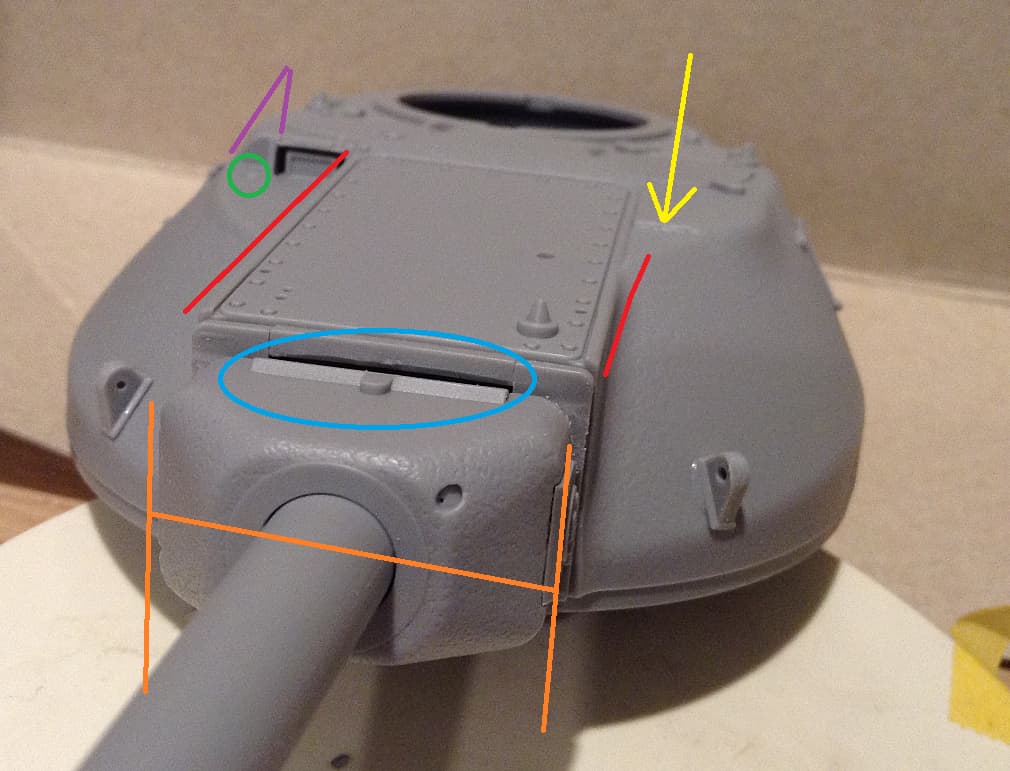 Looking at the open hatch pic, it suggests the Amusing hobby hatch is too wide, and a commonly cited kit issue. However, look at the periscope cover on the left of the hatch-less pic, and its relation to the bolt (green circle) in front of it, plus the apparent width of the triangular segment to the scope cover’s left. Then look at how the section of turret on the right of the hatch tapers slightly at the front. Compare to the pic of the kit turret. Then compare the centreline on the raised section on the right close to the back end of the turret to the area in the kit (Yellow arrow) I think it is because the sections on the kit turret beside the hatch are too narrow, not that the kit hatch is too wide at all. Also the mantlet in the kit seems narrower than the one in the pic, which means if it was widened to fit a widened area on the hull beside the hatch, the rest would be in proportion!

Yes this is all based on one pic and perspective might play its part, but to my eye, I believe I’m on the right path (as opposed to confusing muddy water for bushes ( 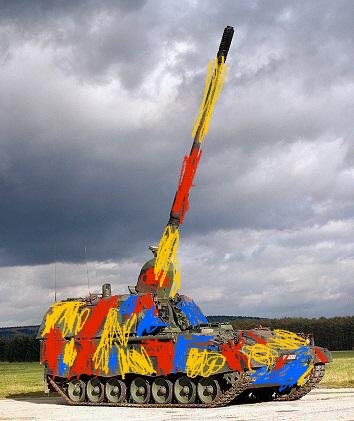 I think your chosen path is possibly the enlightened way Peter

I think you’re right. Is that riveted (?) cover plate around the prominent bolt missing from the kit? Its side pieces (if there are any) would give you that bit of extra width to be in line with the widened red-line area…don’t envy you sculpting the latter though! Looks like the lifting lug holes need drilling out but at least you’ve got decent bases on them to tease down into weld seams

Yes, there is an etch strip for that. You have to place a canvas cover around the mantlet and the etch pieces go over that. You need to make the canvas cover, which is no big issue. As the cover hides everything, filling out the mantlet is the easy part - it is hidden!

Yes, the basics for the weld beads is good, needs trimming and sculpting with a sharp blade. I usually do them after they have set on the kit.

A couple of annoying and self induced setbacks on the Panther…
Was starting the damage on the barrel cleaning rod tube, and over heated the small screwdriver which then burnt through the tube … 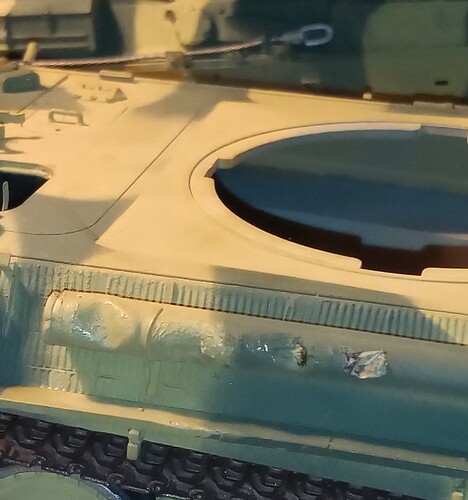 So out with the filler and made good on that, and did some paint touch up. Will give a very light rust on the edges.

Then while looking at the ref photo I realised the LH tow rope connector wasn’t actually fitted to the vehicle tool rack, so because the paint had set on the etch securing pins, as I pulled the connector, that in turn pulled the tool rack off the hull…

So that needed reglueing then some more paint touch up. 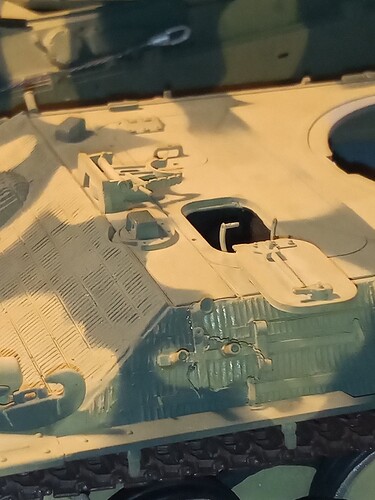 And on this last shot ignore the 3 coloured markers, they are for the Stillbrew build.
On the turret to the rear you can obviously see the 5 is in black… I didn’t want to buy a Star decal sheet just for 415 in white, so I used the numbers from 2 old sets and put them together as they were a perfect size match. The 5 will be hand painted white tomorrow night after work. 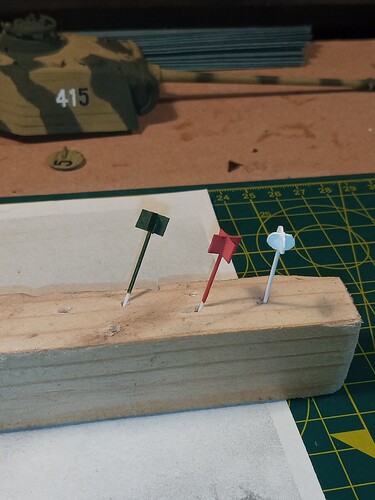 Hand painting numbers? You’re a better man than I John.

Well, in my defence I’m using the black 5 as a base template so even I should be able to follow the lines … I hope

so even I should be able to follow the lines

No way my nerves or sausage fingers would manage that…lol

The damage to the cleaning rod tube looks great John, and no one would have known about the screwdriver gaffe if you hadn’t mentioned,

Cheers G. It needs tidying up a bit, but I wont do any more to it, it looks close enough now. Its always good to share the gaffs … makes it more real then lol

Amen to your gaffe comment John, least yours wasn’t as terminal as mine,

Okay, I am officially not doing the picture that I chose. I have struck some issues:

I could cut it all away and start again, but I can use what I have and make what is depicted in another photo… so I’ll progress with that.

The addition of Magic Sculpt putty to correct the turret shape went well. Hopefully the cast texture I added with a bristle brush will match the kit finish. Once it is all under primer I will be able to judge that.

Here is what I have now. Whilst the kit has etch for the canvas securing straps it is now too short for the resized mantlet and also the bolt heads as depicted are not correctly spaced anyway. Adding bolts to my own strip now. A little filler between the strip and canvas is still to be added. 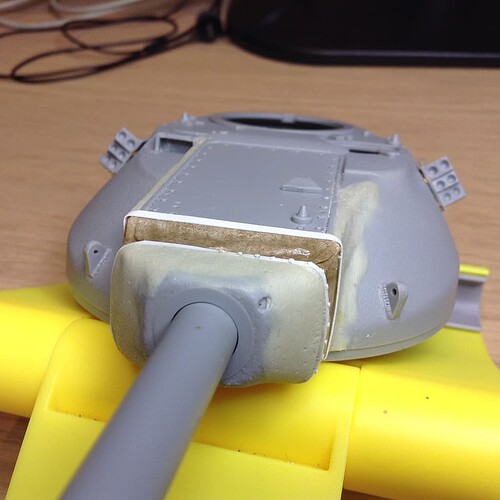 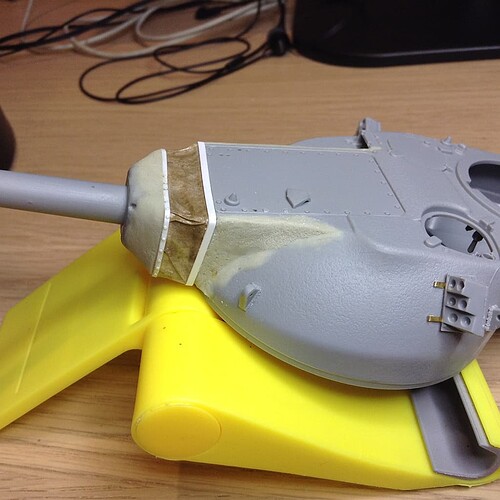 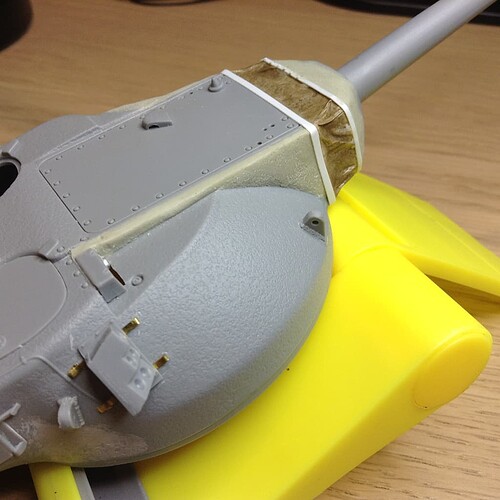