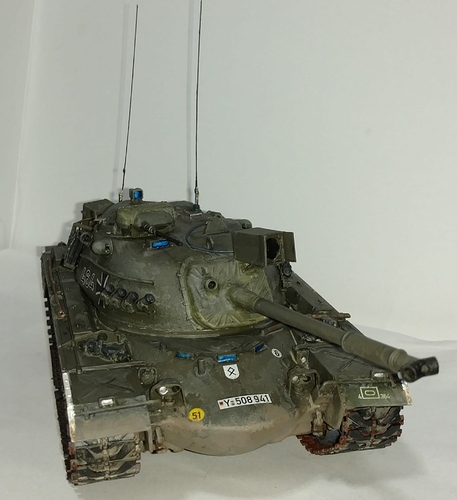 An exclamation mark was missing in front of that image link.
I added it to activate the image link.

How was the kit? Easy or difficult to build? Fit of parts?

Hi, Robin. Mia culpa. I saw that there and thought it was something I did and deleted it. Oops! Question … I posted 3 other shot of this. They did not post. I do something wrong or do I need to post one at a time? As forthe Kit, nice. It’s a 2014 tooling. Beats the crap out of the old 70s /early 80s Italeri reboxes. Not as fancy as sommething from RFM or the likes, but a good basic kit. (working on the M48A2CGA2 now.) I had to use a little putty on the seam at the front upper an lower hull, but that was my doings … exacto sipped and put a wee divit in it. Tracks are rubber band , but modern material and worked fine. Easily equal to their new relaese Leo1s.

Discourse has this system of sorting users into trust levels. I think that the main reason is to make it difficult for spammers, make them earn the trust of the community before they can post a lot of crap.
The effect of this is that new users, like you, have a limited set of abilities such as a limit on the number of images and links they can add in a post. The restrictions will go away with time and how active you are. Read posts, give a like or many, reply to others, receive likes et.c all count towards reaching higher trus levels. This game of “jumping through hoops” can be a little irritating but just stick with it for a while.

You could try editing your post to check if you can add more images, otherwise just make more posts 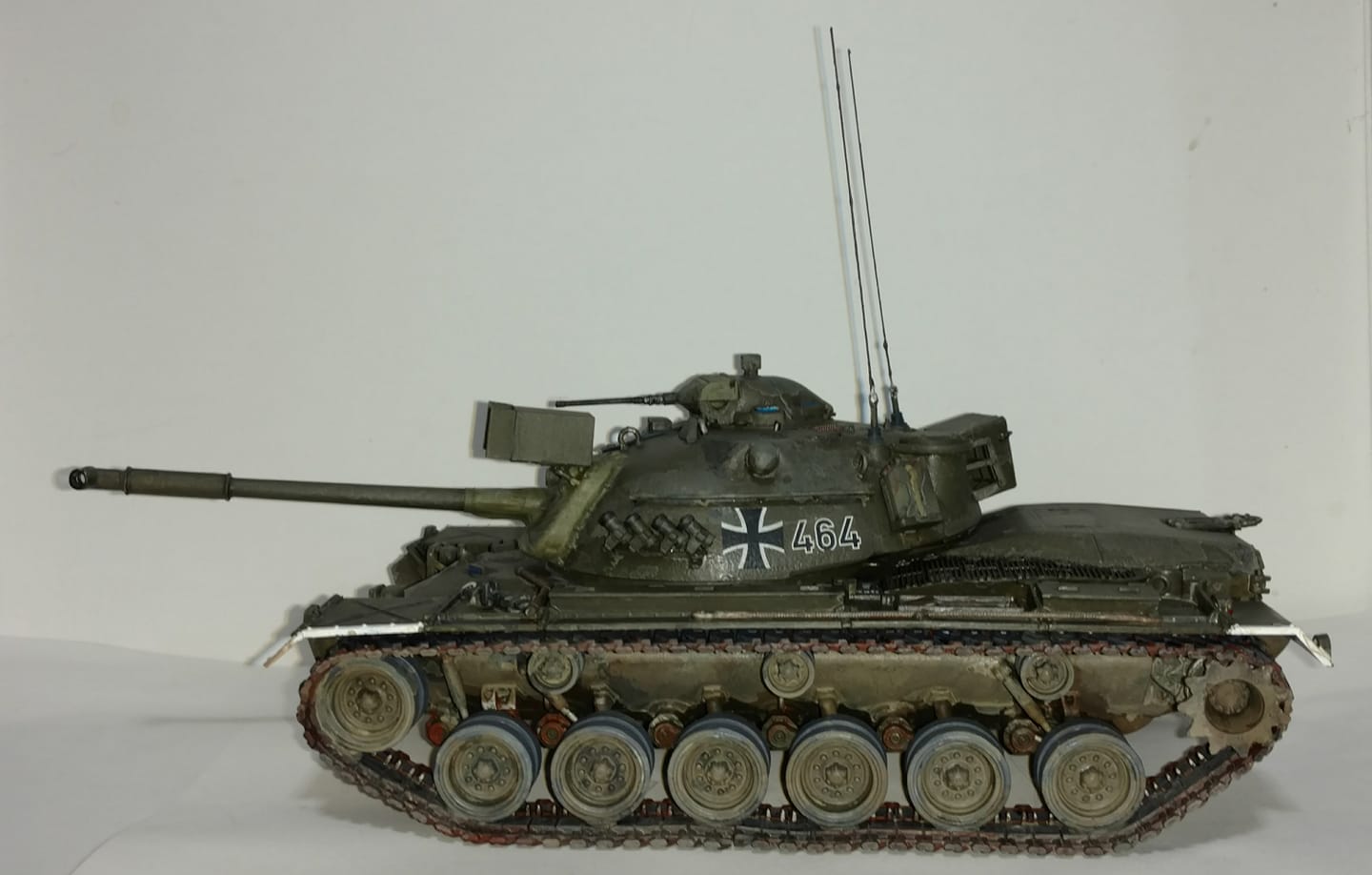 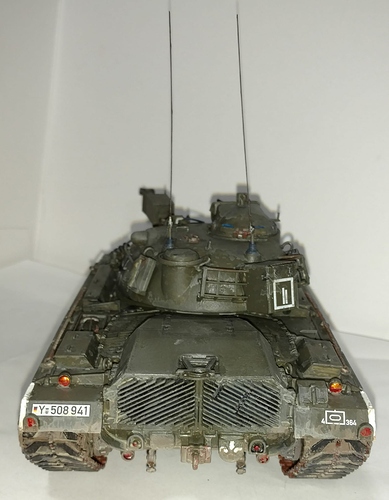 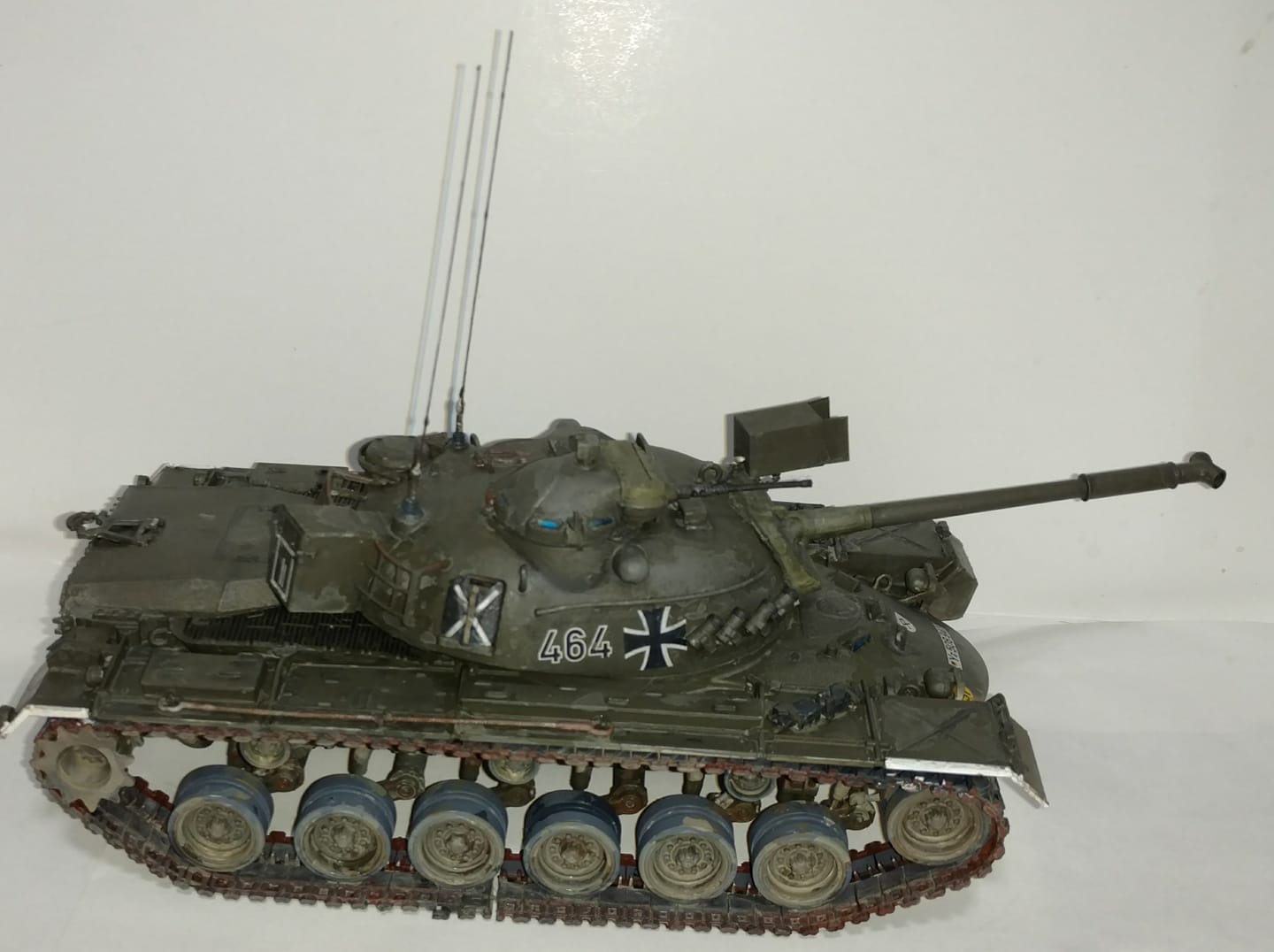 Looks very nice. I’ve been tempted to get this or the A2GA2.

That is a nice Patton! I’ve always thought the German M-48A2CGA1 was one of the Patton’s more attractive iterations, and you have done a credible job with it.

Very nice Timothy, very nice indeed. I made a version some years ago using the ancient Monogram kit and the Lo Models conversion set - with Tamiya tracks. It shows its age - ie my skills weren’t brilliant back then (and may not be much now!) but I’ve always liked this version. Time to get the Revell kit and see what can be done I think, so thanks for the inspiration.

They have 3 versions A2/A2C (builds as US (Europe and Korea) , Bundeswehr and Israeli.) The A2CGA1 … the one here. And the A2CGA2 with the 105mm gun. (Interestingly the decals/schemes provided, the only one with the 3 tone camo is from a Territorial unit (reserves) but … as far as I can tell … it was just a storage unit . Like the prepositioned equipment we have in Europe, Middle East , and other spots. (The Tiger at Bovington sees more activity.)

The later Revell one I done a few years back 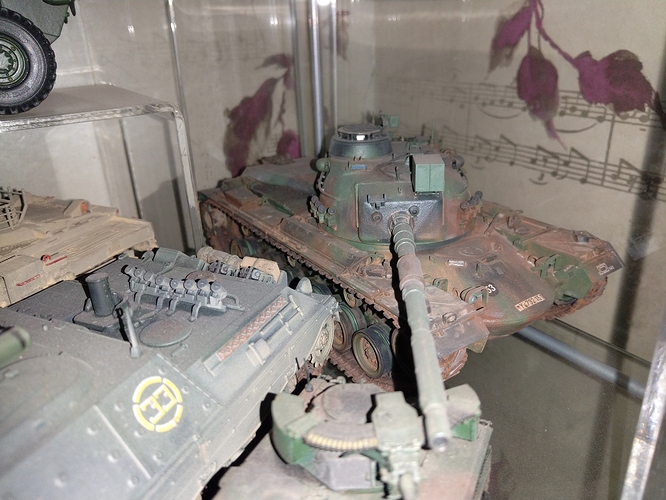 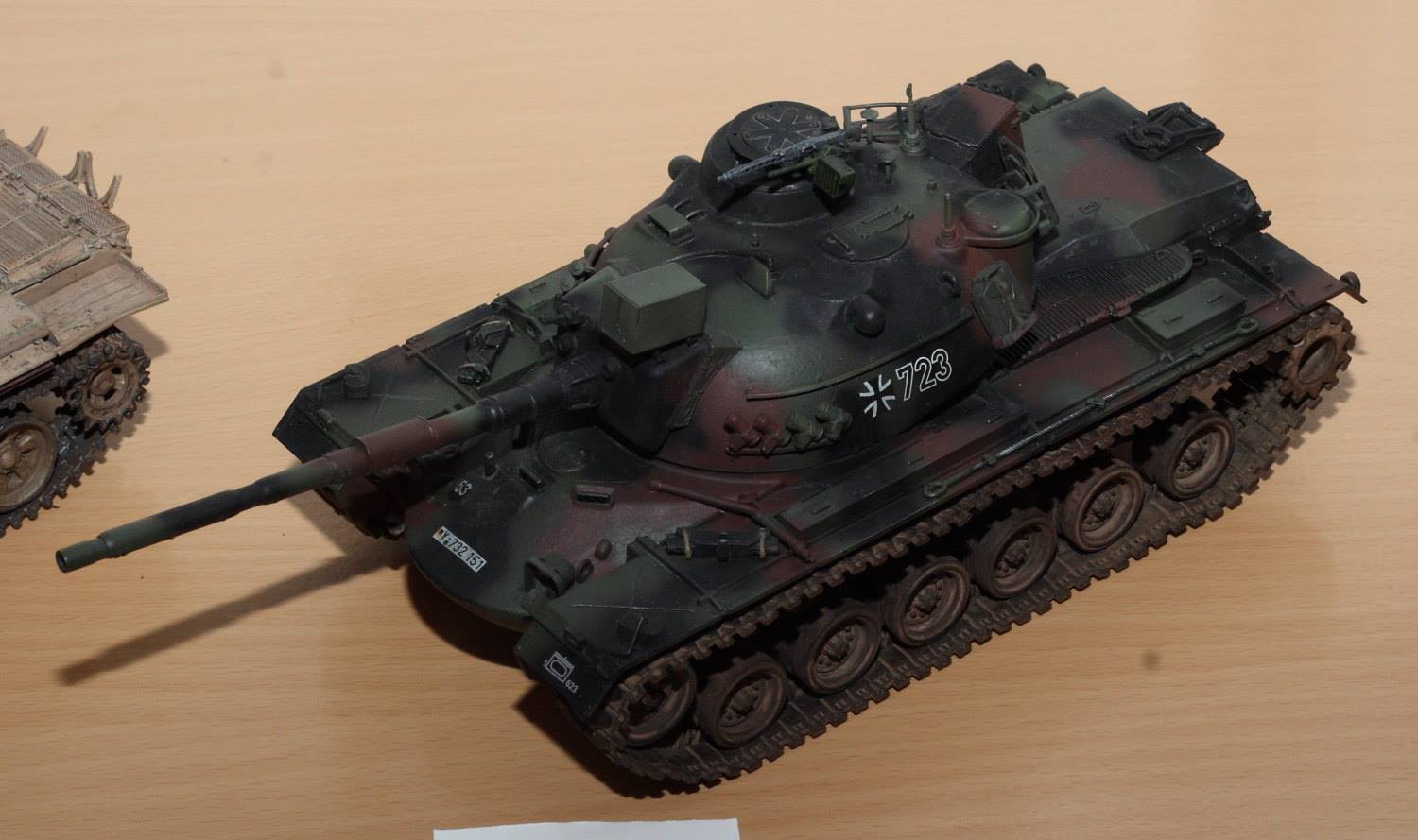 nice to see a member of the patton family being built, thanks for posting

nice models! It brings back a lot of good memories!

1971 till 1975 I was with Panzerbatallion 354 at Hammelburg, PzGrenBrig 35. PzGrenBrig had one PzBtl and PzBrig had two PzBtl. PzBrig 36 hat two Panzerbataillone, PzBtl 363 and PzBtl 364. In the 1981 I became CO of 3. PzBtl 124 at Amberg-Kümmersbruck with M48A2GA2, OTL Eilers had been the Bataillonskommandeur. When I left PzBtl 124 in 1983 the transition to Leopard 2 started. Later on I was S3 with PzBtl 533 at Düren. After this assignment fate struck! Due to a hearing profile, I had to leave my beloved Panzertruppe. And for the rest of my sevice, I ended up as “Swivel Chair Pilot” in Divisonal and Territorial Army headquarters! Fun was over!

No, no, this is not correct. I loved my time in the Bundeswehr! Even as a Chair farter!

Thanks for sharing your nice models with us!

Just for the record and while we’re just beginning to mark time in the UK with a further lockdown, here’s my Bundeswehr M48 from some time ago.

It needed a fair bit of scratch work along the track guards and the camouflage net - replicating the older type with Hessian strips - had to be constructed from paper strips and gauze bandage. I modified the Dragon LAH Crew at Kursk figure set and like to think they came out quite well; unfortunately the photograph, taken at a show, isn’t particularly clear: 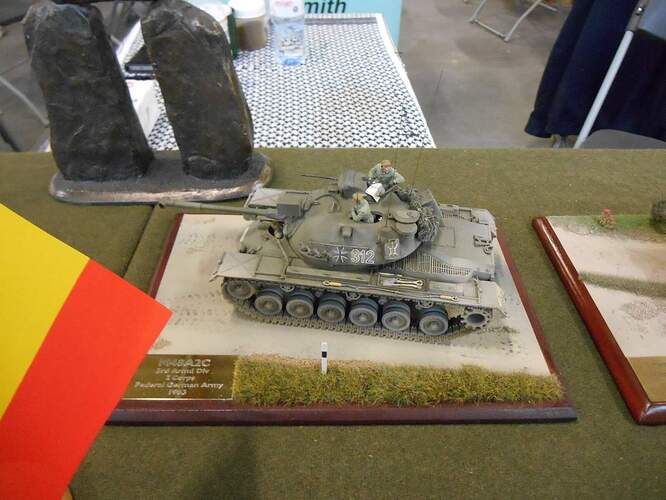 beautiful work! that model looks good as a diorama and alone.

Brian,
great build! When did you build the Monogram M48A2?

Making a great model by using the old Monogram model kit, you had to spend some time over the model! It looks really cool on the diorama base! What do you use for the road?

I had build this kit in 1969. I had build it according to my standards then!

Today I would feel stong pain if looking at it. But, due to my frequent transfers, these kit’s career must have ended in the dustbin, many moons ago!

Monogram did indeed do a lot of kits in 1/32. My very first major rebuild was following Shep Paine’s advice and making a one piece transmission housing for the Sherman out of Bondo. How I miss those old sheets!
That said, the Monogram kit is not 1/32, although many people still believe it is. It is 1/35. Brian’s Tamiya track would not fit it weren’t. (nice job by the way)
I’ve also measured the turret and it was quite accurate. Again, for 1/35.

They’re still fun little kits to fiddle around with. At least for me…

Well, I hope we’re all not in danger of hijacking Timothy’s thread here; thanks for the interest in my Monogram conversion.

It was Timothy’s model which has prompted my re-interest in the model and I am now keen to re-visit a Bundeswehr model, but also try and track down what now seems to be a quite rare kit, the Revell M48 A2/AC as I would like to portray a US version deployed in Germany.

My Monogram model was made at least 15 years or so ago, and whilst I quite enjoyed trying to bring it up to spec I’m sure that I can do better, but really fancy making a US version.